TALLADEGA, Ala. – The 2017 Talladega 600 was unlike any other event fired at the Civilian Marksmanship Program’s (CMP) Talladega Marksmanship Park. Though most expected arguably chilly December weather in the South, no one predicted the eight inches of snow that blanketed the area – the most snow locals had seen in over two decades.

“I thought we chose to have this event in Alabama instead of Ohio to avoid stuff like this,” joked the Talladega employees. “It’s not even snowing in Ohio!” 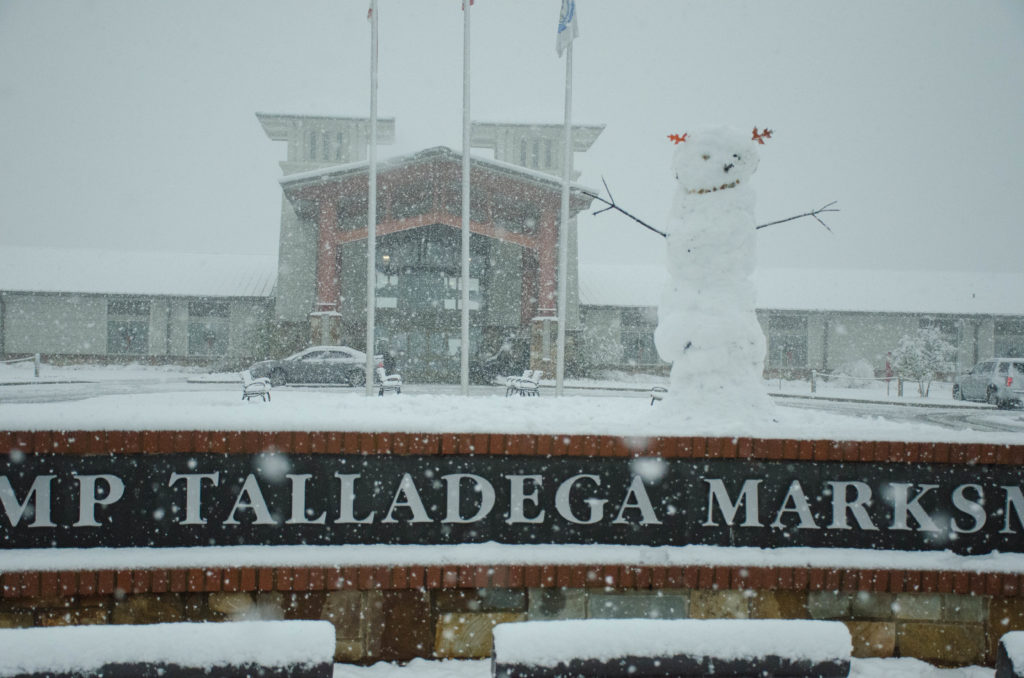 The Alabamians, some of whom had never seen snow before, took the time to make a snowman in front of the clubhouse.

Though the snow-covered Southern pines and white fields were beautiful, the inclement weather was so thick that it completely eliminated visibility to the 300- and 600-yard lines, forcing the cancellation and elimination of the Carbine, GSM and M1/M14 matches from the Talladega schedule.

Besides the snow, also making a showing for the first time were members of the White Oak/Elihu Root National Civilian Team, comprised of the top-performing civilians from the National Matches at Camp Perry. Members are Justin Utley, 32, of Mineola, TX, James Vaughn, 47, of Bloomington, IL, John Holliger, 52, of Carlock, IL, and Robert Taylor, 38, of Sonora, CA. 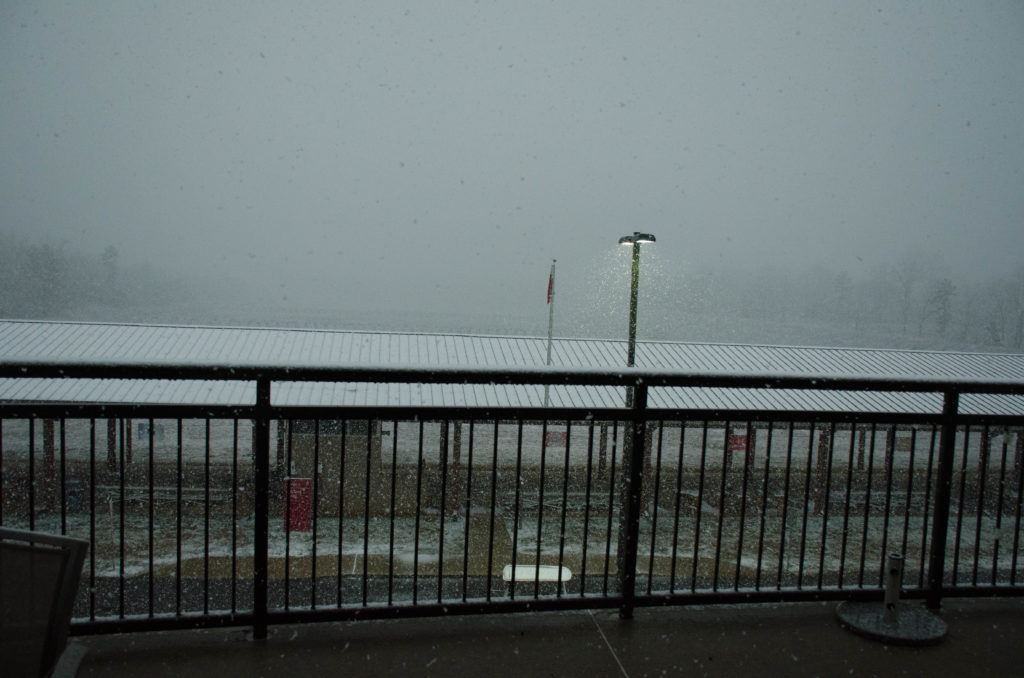 Since falling snow was so thick in Talladega on Dec. 8 and caused limited visibility, the day’s matches had to be cancelled.

Traditionally, the team is only honorary – never meeting to fire in a true match together. But this year, the team met at Talladega to compete in the 4-Man Team Match. Proving their combined talents, the members earned second overall in the competition.

Utley, the 2017 National Matches President’s 100 champion, kept his winning streak going by taking the field in the Congressional 30 event at Talladega – mirrored off of the President’s match. Utley dropped only one point in the match, earning an overall score of 299-13x. 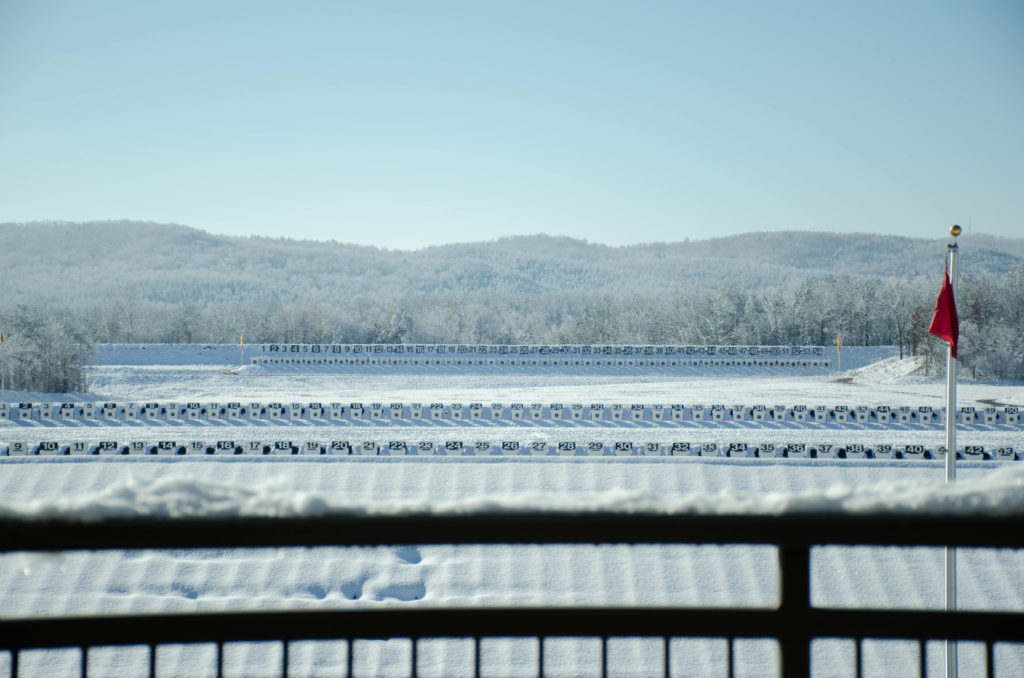 The following day left a blanket of white on the Marksmanship Park grounds.

Since his National Match win, Utley admits he hadn’t done much shooting leading up to the Talladega 600 – only a few monthly matches. He says after being in the sport for so long, he now knows the basics and feels it all comes back each time he steps up to the line.

“I don’t practice near as much as I used to,” he said. “It’s just having so much experience and doing it so long, everything just kind of sticks – it’s like riding a bicycle I guess.” 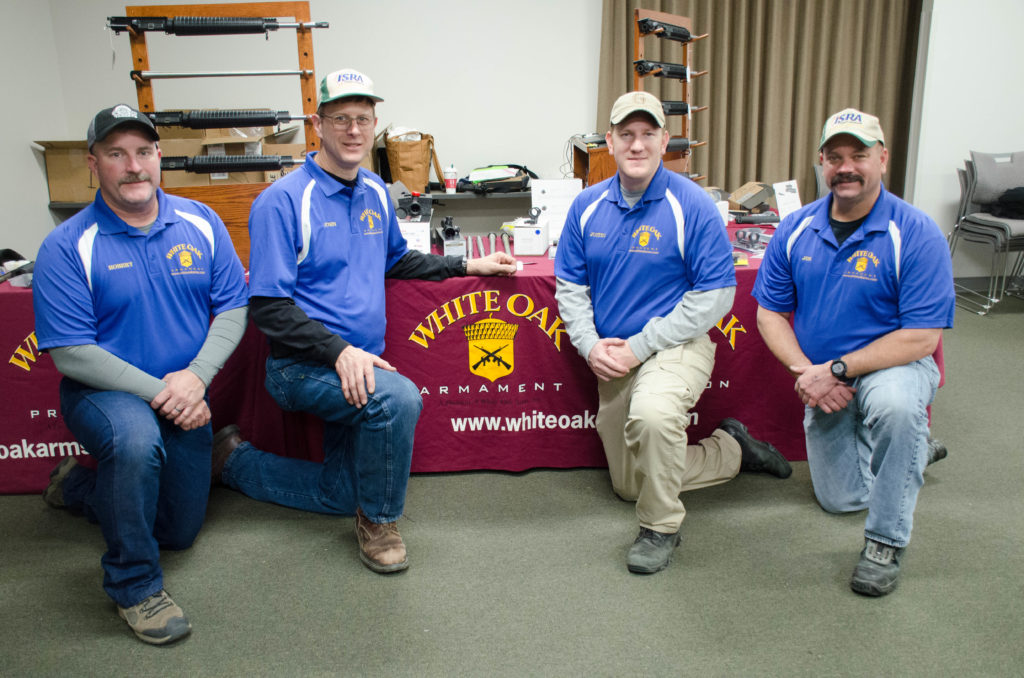 His first time to Talladega, Utley only made the trip to Alabama because he was a member of the Elihu Root Civilian Team, but he soon became surprised at how much he enjoyed the matches and the location.

“I think this event is nice. It really attracts a lot of people, and it’s a super facility – you couldn’t ask for a better facility,” he said with a smile. 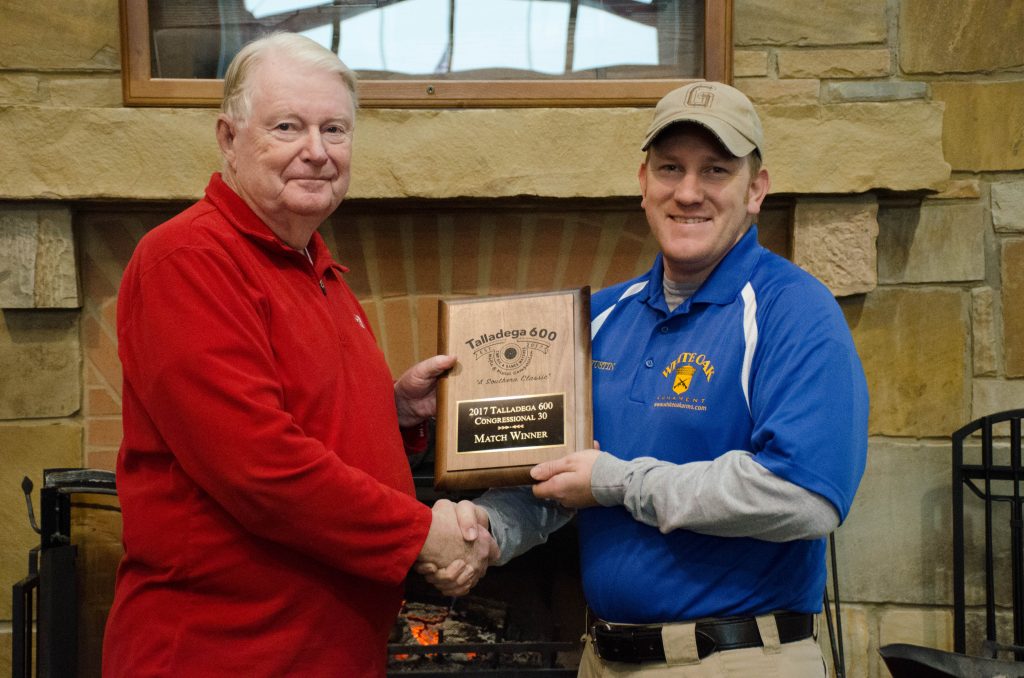 Justin Utley dropped only one point in his Congressional 30 win.

Winning the M16 Match was Capt Richard Korges of the U.S. Marine Corps and Beaufort, SC, with a score of 382-7x. Capt Korges also received his introductory leg points towards earning a Distinguished Badge.

Korges fired the match on what happened to be his 33rd birthday. With family located in different states, he joked that there was only one way he wanted to celebrate his birthday – traveling alone to Talladega Marksmanship Park to shoot some guns in the cold.

“It was a great birthday present,” he said as he laughed. 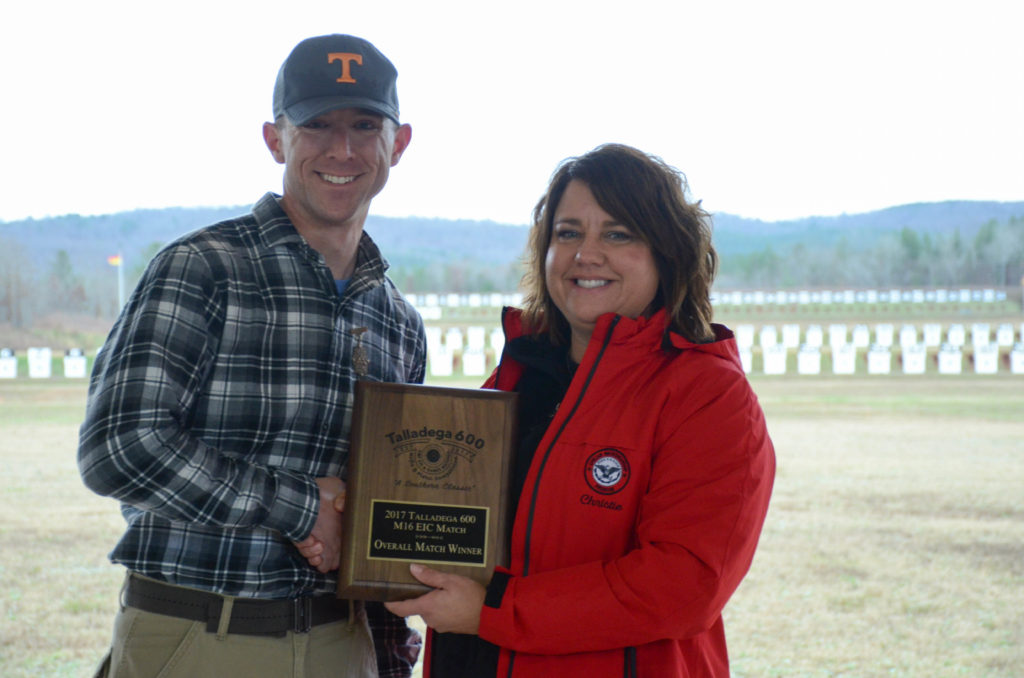 Capt Richard Korges was the overall non-Distinguished winner of the SAFS M16 match.

SGT Ben Cleland, 24, of the U.S. Army Marksmanship Unit (AMU), came out on top of the Rifle EIC event, with an incredible score of 497-23x. His teammate, Amanda Elsenboss, 28, earned the High Woman title with her score of 492-18x.

The highest non-distinguished competitor of the match was SFC Joshua Kent, 34, of the Army Reserve National Guard. SFC Kent fired a score of 490-21x and finished 10th overall.

Elsenboss went on with teammate SFC Shane Barnhart, 39, to fire a score of 596-24x in the Dixie Double two-person team event to claim first place by x-count. Individually, Elsenboss gave an incredible performance – dropping only one point the entire match to receive a score of 299-9x. She was also the High Woman of the Congressional 30 event. 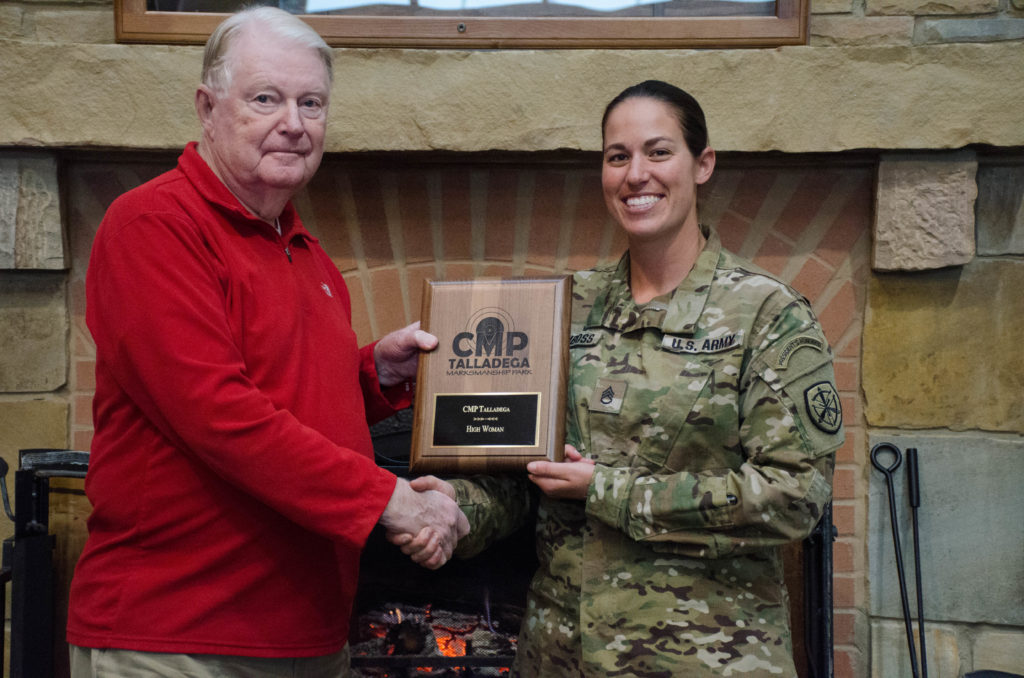 Later on, the pair joined up with Cleland and another AMU member, SFC Brandon Green, 33, to overtake the 4-Man Team event, with a score of 1977-90x.

In CMP Games events, Nick Till, 44, of Howell, MI, and the CMP highpower team, overtook the Garand Match Course with a score of 291-10x. Till’s CMP teammate Ryan Vander Poppen, 45, of Hamilton, MI, fired a score of 284-4x to best the field in the Vintage Military Match, as Keith Schachle, 59, of Brooks, GA, claimed the Modern Military title with a score of 290-12x. Victor Betzold, 63 of Bel Air, MD, reached the top spot in the Springfield event for the second year, with a score of 287-5x. 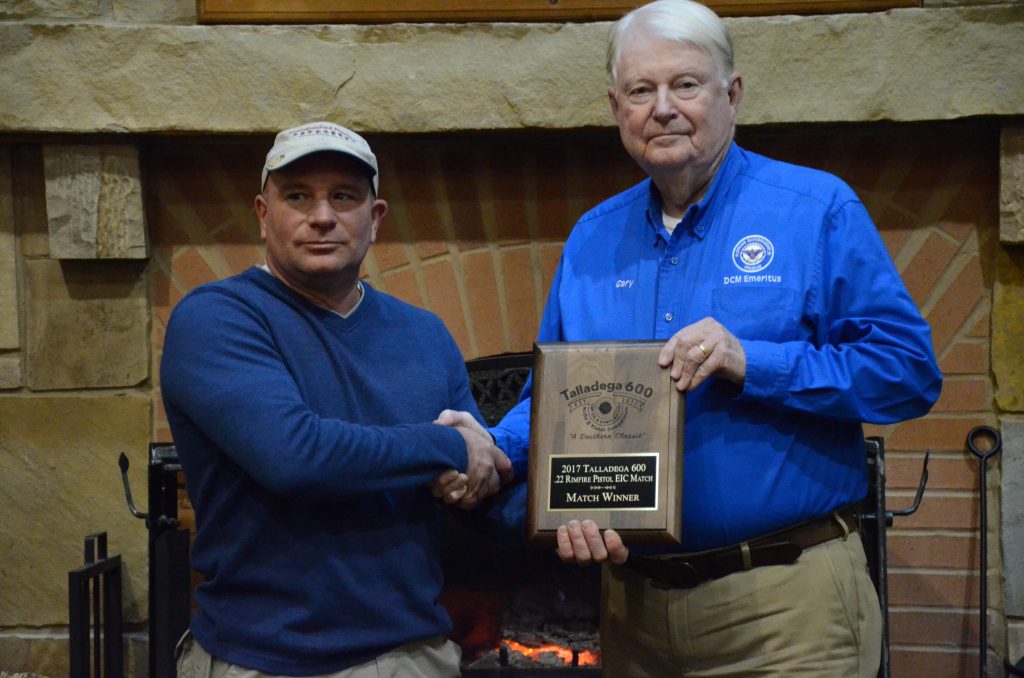 Anthony Bellipanni was the winner of the .22 Rimfire Pistol match, earning his final points towards his third Distinguished Badge.

In Pistol, Anthony Bellipanni, 47, of Birmingham, AL, overtook the .22 Rimfire Pistol EIC Match Course and earned his final points towards becoming distinguished in the discipline – giving him a triple distinguished designation, as he had previously earned badges in both rifle and pistol. Bellipanni was also the winner of the Pistol EIC Match during the weekend, with a score of 273-8x. 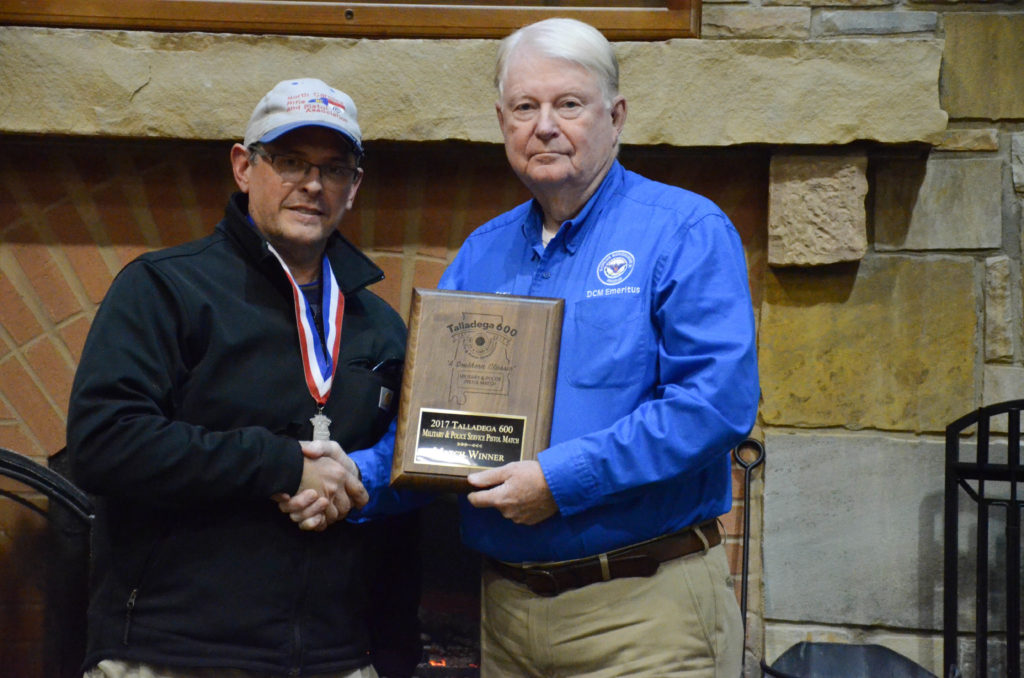 Eric Herrin was the overall winner of both the As-Issued 1911 and Military & Police Service Pistol events.

Eric Herrin, 54, of Raleigh, NC, was the lead scorer in both the As-Issued 1911 event and the Military & Police Service Pistol match.

Abigail Keeven, 20, of New Haven, MO, was the High Junior and High Woman of the Modern Military Match held during the 2017 Talladega 600 Match at CMP’s Talladega Marksmanship Park in Alabama, firing an impressive score of 287-7x and finishing second overall. The CMP Games events began on Saturday, Dec. 9, following an unexpected winter storm the night before that brought high winds and snow accumulations that haven’t been seen in the area for almost 25 years.

Keeven made her second appearance at the Talladega 600 this year after debuting in 2016 with a fourth-place finish and earning the High Junior title in the Garand Match. Though she’s used to sometimes firing in colder weather in Missouri, she really wasn’t expecting to come to Alabama to shoot with snow on the ground.

“It’s actually warmer back home than it is right now!” she said with a laugh. 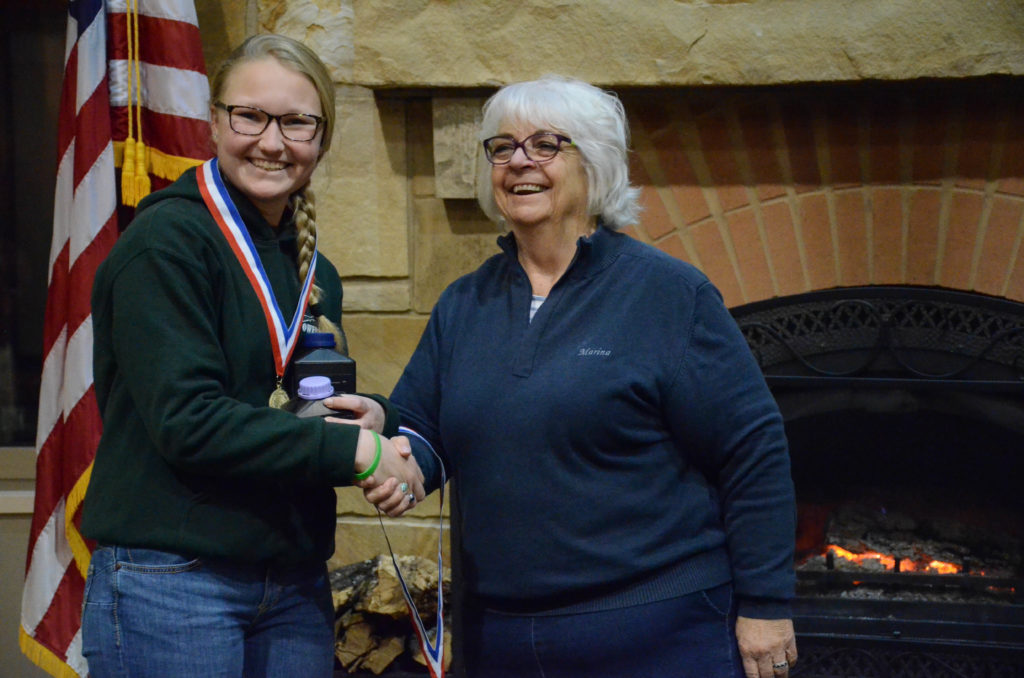 Abigail Keeven was the High Junior and High Woman of the Modern Military Match and finished second overall.

Keeven, who also accumulated an aggregate score of 279-4x in this year’s Garand Match and landed in eighth place overall, has been shooting the Garand for the past three years. She’s been involved in marksmanship since she was 8 years old and on the National BB Gun team, eventually moving on to .22s and eventually highpower.

Though being one of the only juniors and females on the line may be intimidating to some, for Keeven, she uses each match as a learning opportunity – looking beyond who’s firing beside her and focusing on her own game.

“It’s definitely different, but I really enjoy it,” she said. “All of the guys I shoot with, they’re great, and they help me out whenever they can, and they push me to be the best that I can be.”

Also returning to the Talladega 600 in 2017 was Sam Payne, 18, of Kingston, GA, who again overtook the Rimfire Sporter T-Class with a score of 587-24x. So far, no one has been able to take the title from Payne, who has now been champion of the T-Class since the existence of the Talladega 600 event.

Douglas McWhorter, 14, of Springville, AL, also fired in the T-Class and earned silver with his score of 579-19x. McWhorter claimed the fifth place spot overall in the match.

For a complete list of results of the Talladega 600, take a look at the CMP’s Competition Tracker page at https://ct.thecmp.org/app/v1/index.php?do=match&task=edit&match=16027&tab=results.