Back in the late 1930’s, the police pistol market in German was owned by Walther between the PP & the PPK. Mauser wanted in on the market but to do so would require a pistol that was better than the Walther. In my opinion, they succeeded and, but for WWII, would have made a far bigger dent in Walther’s sales.

This particular example illustrates something that most American’s don’t really understand. In April 1942 the Germans had been at war for just over 2 1/2 years but were not yet on a full war economy. This pistol, produced that month by it’s serial number, was not made for the military or even the police – the only proof mark it bears is the standard civilian proof mark. In the middle of WWII, this was made for civilian purchase. At the end of the war it ended up in some GI’s pocket and was brought back to the US by him – there are no importer’s marks either – and at some point, probably in the 1950’s it was badly nickel plated destroying the original Mauser bluing. I ponder getting it refinished when I can afford to send it off I’d like to have the nickel stripped and have it parkerized. I’ll not have it blued again in case someone thinks the blue is the original finish somewhere down the road. 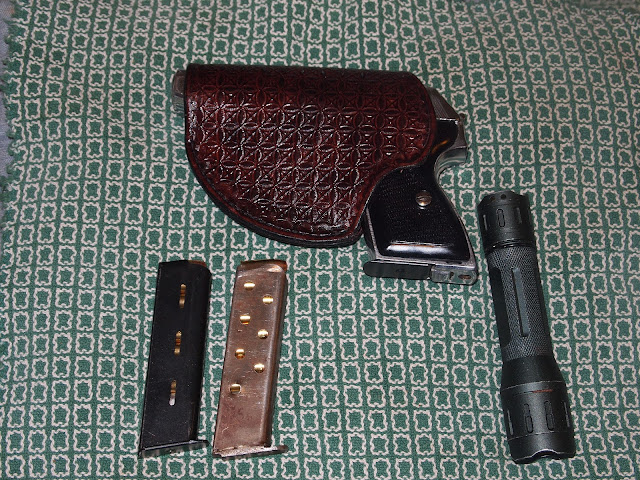 The holster in this image was originally made for a S&W 642 by [url]www.woodenleather.com[/url] and is, naturally, of his usual exquisite quality. If you know how big a J-Frame is, that should give you a good idea of the size of the pistol. While it is smaller than, say, a CZ-50 or PP, it is still a relatively large pistol for .32 ACP. The two spare magazines and tactical light are part of my everyday carry with this pistol. 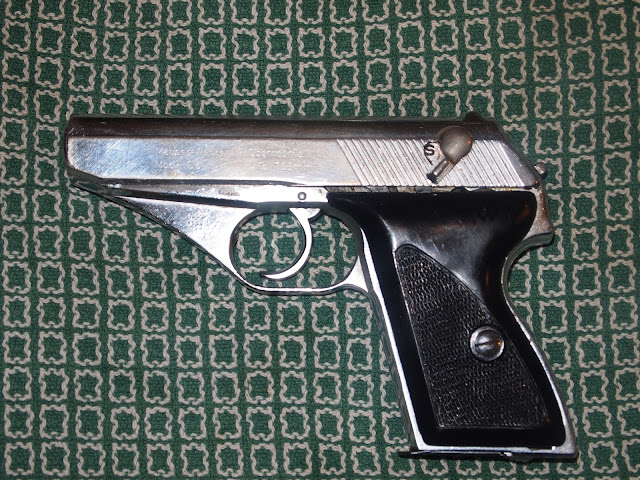 The grips are modern reproductions in plastic as the wood originals were almost ready to fall apart and have been put away safely in my gun safe. I also replaced all springs with a Wolfe kit before I started shooting the pistol. The old recoil spring was noticeably weaker and setback.

There are, to the new user, some peculiarities.

The European style slide mounted safety is “backwards” to most American shooters who expect a 1911 style down=off. The butt mounted magazine release is also something disliked by many Americans but was the expected standard for a European pistol of its day.

The DA trigger pull is long and heavy, though smooth enough after 70 years of use. The SA pull is as crisp and clean as one could hope for.

There is no slide release. You have to put in a mag for it go forward. Then, if the safety is on, the hammer automatically drops. Now that is safe because the safety physically moves the rear end of the firing pin to where it can not be hit by the hammer. This can be a bit unnerving the first few times you load the pistol… 😮

Let’s take a little closer look at the HSc.

First, this page has a good parts view: http://www.stevespages.com/ipb-mauser-hsc.html

Technical details can be found on Wiki: http://en.wikipedia.org/wiki/Mauser_HSc 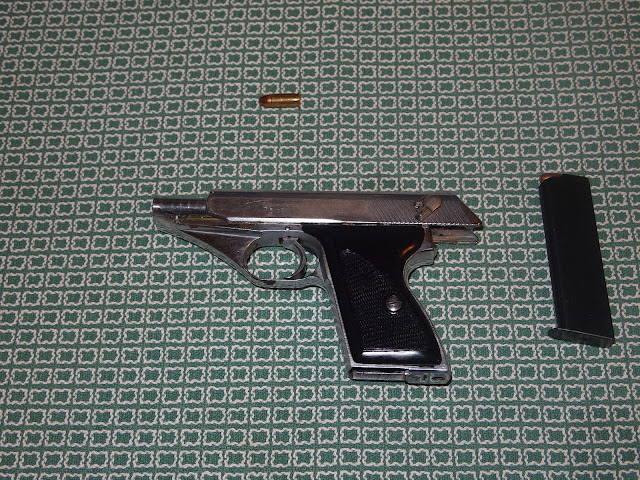 To begin stripping the pistol, clear it. 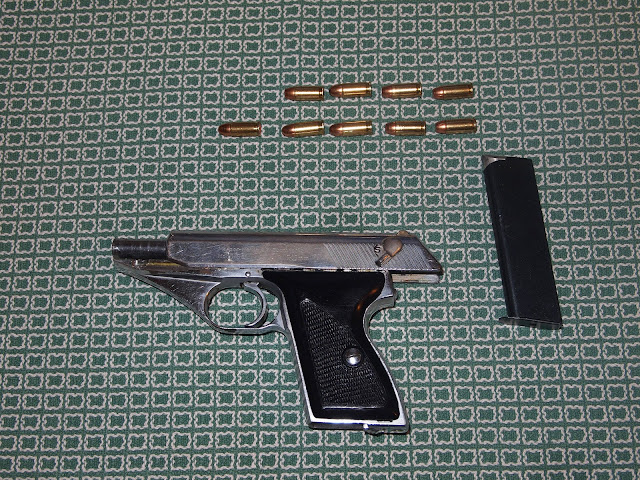 Then remove the ammunition from the magazine. As you can see, this is an 8+1 pistol. You will need an empty magazine to finish field stripping the pistol. 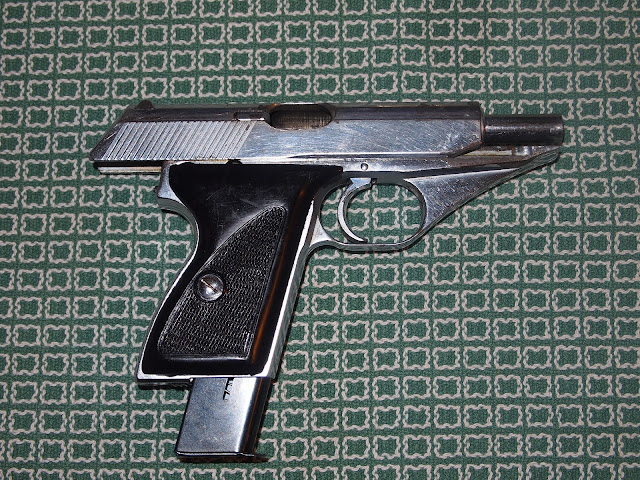 Double check the chamber!
Now insert the empty magazine into the pistol to cause the slide to go forward. 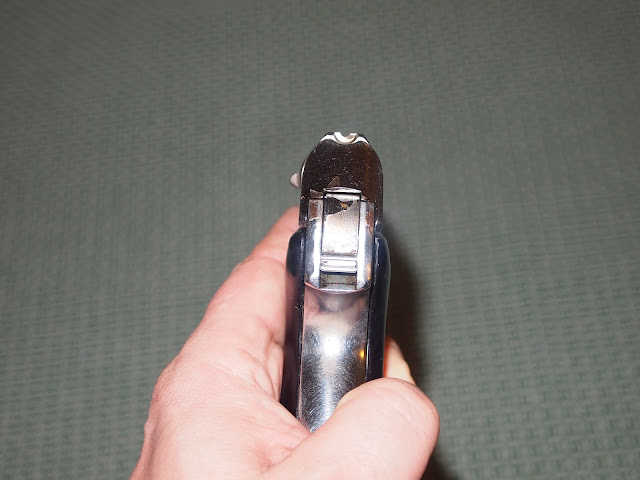 Notice the hammer? It’s mostly enclosed in the slide but it does have a small protrusion with which to cock or decock the pistol. I have never gotten hammer or slide bite from this pistol (knock on wood, baby) because of how well this pistol is designed. The hammer is cocked which is how we want it. 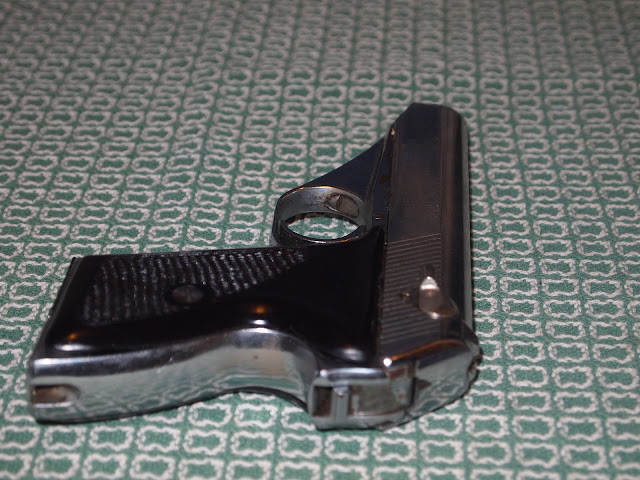 At the front top of the trigger guard you can just make out the take down button. 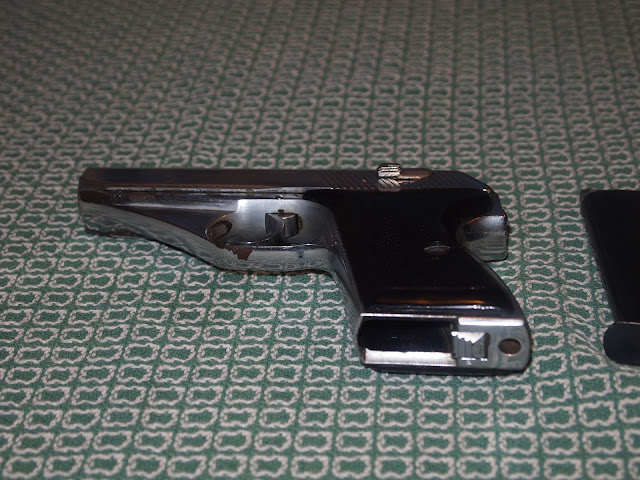 Remove the magazine and put the pistol on safe. 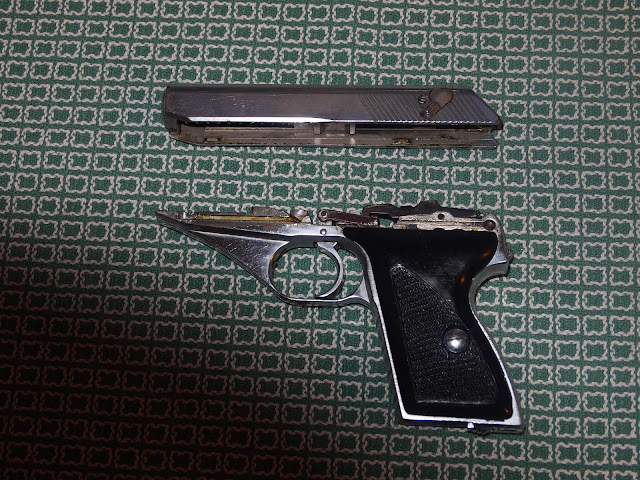 Holding the button down, the slide will slip a little foward and come off the pistol. 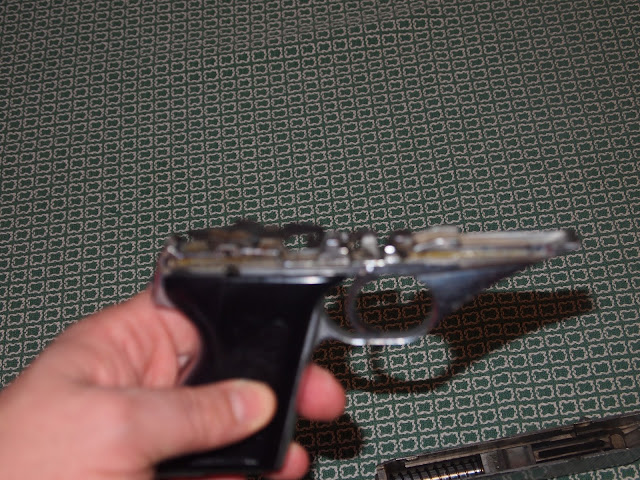 Here we run into the limit of my len’s close focus ability 🙁 however you can still make out the bar across the top of the magazine well? It hooks into the transfer bar and without a magazine in the pistol to lift it a little, the trigger can not be pulled. The slide stop is also part of it. 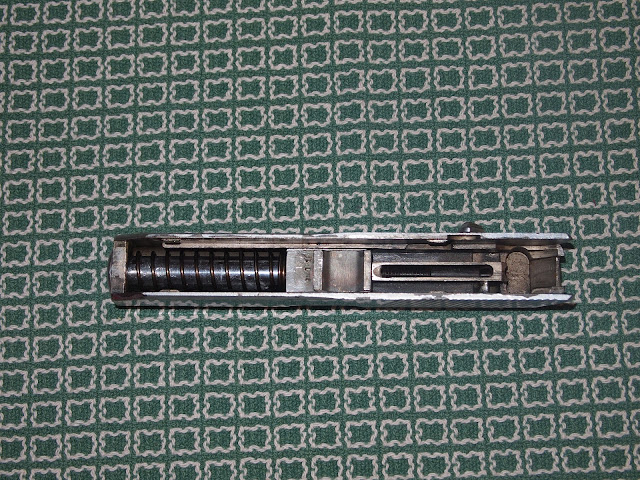 As you can see, the barrel is not attached to the frame. This probably sacrifices some absolute accuracy but I’ve shot better groups with this than with any PPK or CZ I’ve shot. Mauser’s folks, I found, usually knew what they were doing… 😉 Now push the breech of the barrel forward and then pull it down (I usually push through the ejection port) to remove the barrel. That is one heavy ass spring for such a supposedly wimpy cartridge. 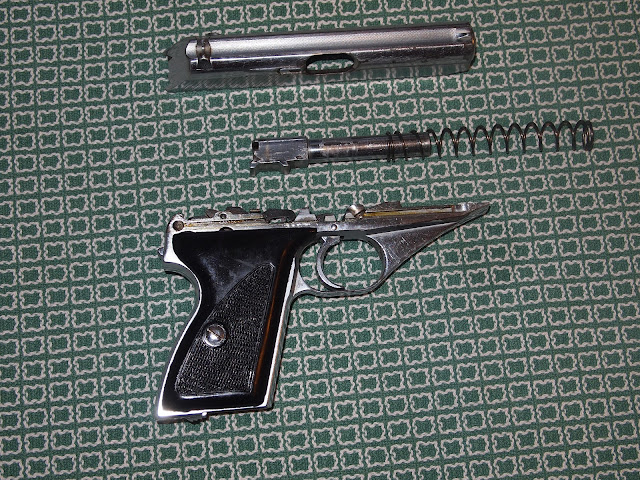 Here we are, fully field stripped. No more is necessary for routine maintenance. It is not an especially difficult gun to smith if it needs repairs. I changed the firing pin (it arrived broken) easily enough but there are a large number of small parts and springs in the slide and trigger mechanism. Be sure you know what you are doing before going further.

As you can see on all these pictures, the nickel is rotten and peeling. I really don’t think a good job was done back when and that’s why I’d like to have the money to get the pistol stripped and parkerized. Alas, I doubt Kickstarter would allow me to fund raise for that project 😆

It’s a nice pistol, reliable & more accurate than I am. It has fired every type of ammo I’ve thrown at it with only one choke that I attribute to a poor hold at the end of a fast fired string. It points naturally for me. The sights are tiny but more visible to me than many of the others in this category. It was designed for police use and the reality is that it is capable of excellent accuracy for a pocket pistol.

The pistol is almost as small as some of the modern pocket pistols – 4″ tall, 6″ long – about the same as a J frame. I like the .32 Auto for a daily carry pistol as the majority of bad guys don’t want to get shot by anything and the other real threat up here is dogs/coyotes & like sized rabid mammals, it is more than powerful enough for that. Buffalo Bore makes an excellent +P hard cast round in this cartridge that I heartily recommend. [url]https://www.buffalobore.com/index.php?l=product_detail&p=132[/url] Wish I had the money for a few boxes of it. I may have to breakdown and buy .32 ACP dies to duplicate the load. I usually buy Winchester White Box or Prvi Partizan for practice & plinking. Yes, it is a delightful plinker too and the bane of soda cans everywhere.

In the end, this is the finest pocket pistol I’ve ever had the pleasure of shooting. I owe a thank you to that long ago vet who destroyed it’s collectors value with that bad nickel job – I probably could never have afforded it otherwise!

It is, however, a .32 ACP and having been made in April 1942 it’s getting long in tooth. I should probably find a newer pocket rocket – I have been looking at the Kel Tec P32 as a result – but there’s just something about it even in it’s post war badly done nickel that appeals to me more than the new ones and it remains my EDC.