‘The Kens’ From the Range: Remembering a Departed Friend

“He was my friend. We just had really good times at and traveling to and from competition events. When he was healthy, he was ready to go to any match.” 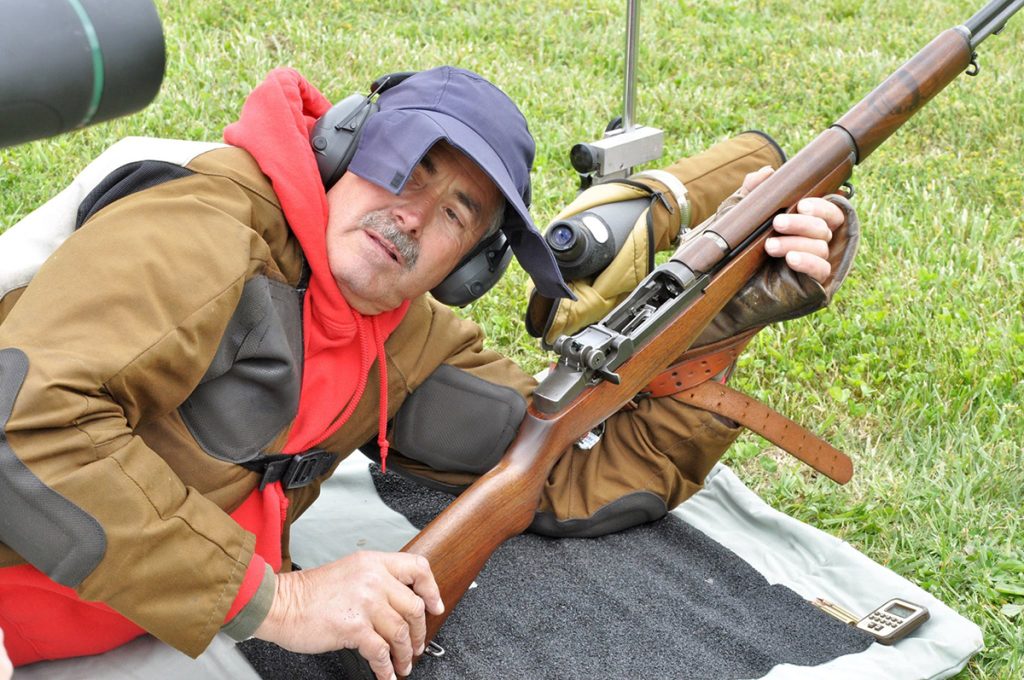 Ken Lygren, a long-time competitor and friend to many, passed away in early October.

That’s the way Ken Lore remembers fellow competitive shooting enthusiast Ken Lygren. Lore recalls that his comrade loved going to shooting competitions – the firearms, making the rifles perform to their own level of expertise. As common faces at CMP (Civilian Marksmanship Program) events, the two men were inseparable and earned the nickname “The Kens” out on the range. 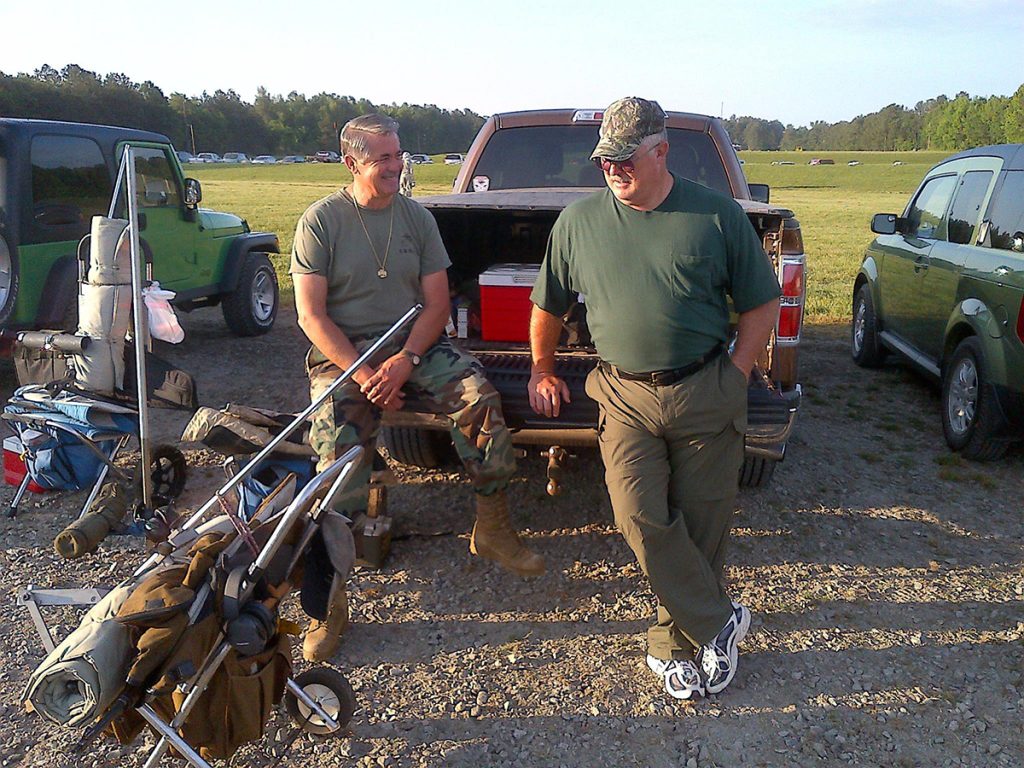 Lygren (left) was a common face at CMP matches.

Both living in North Carolina, the two had shot nearly every rifle, Vintage Sniper and .22 Rimfire Sporter event at the CMP Eastern Games, held in their home state, since 2010. The pair decided to branch out and travel to Ohio in 2012 to compete during CMP week at the Camp Perry National Matches. They eventually made it a tradition each summer, firing in such matches as the National Trophy Individual, National Trophy Team, President’s 100 and Hearst Doubles team match. The men even journeyed to Alabama to compete in the Talladega 600 and Garand Collectors Association (GCA) events at CMP’s Talladega Marksmanship Park.

Thinking back, Lore says the two earned at least 100 or more medals between them, with the number of official CMP matches they shot together in excess of that. 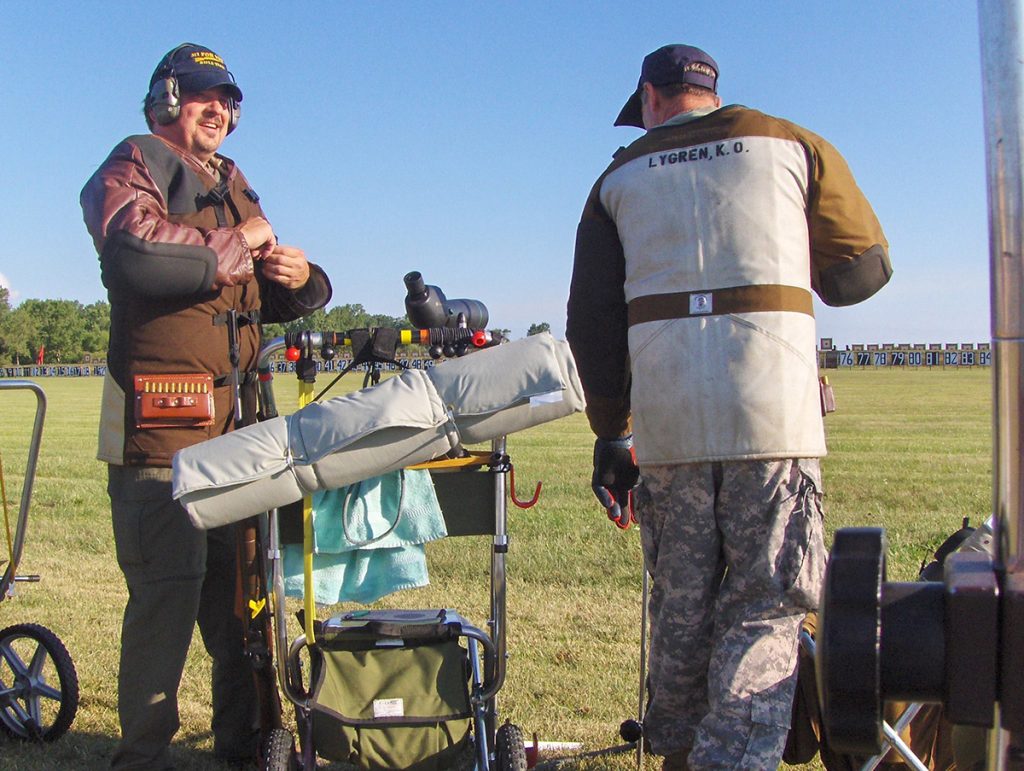 Ken Lore and Ken Lygren became the best of friends while competing together for years on the firing line.

“Our plan was when I retired, we’d hit formal matches hard, hoping to get to Oklahoma and Phoenix as well,” Lore said.

“I retired in July of 2016, and Ken took a hard turn for the worse at Nationals later that month.” 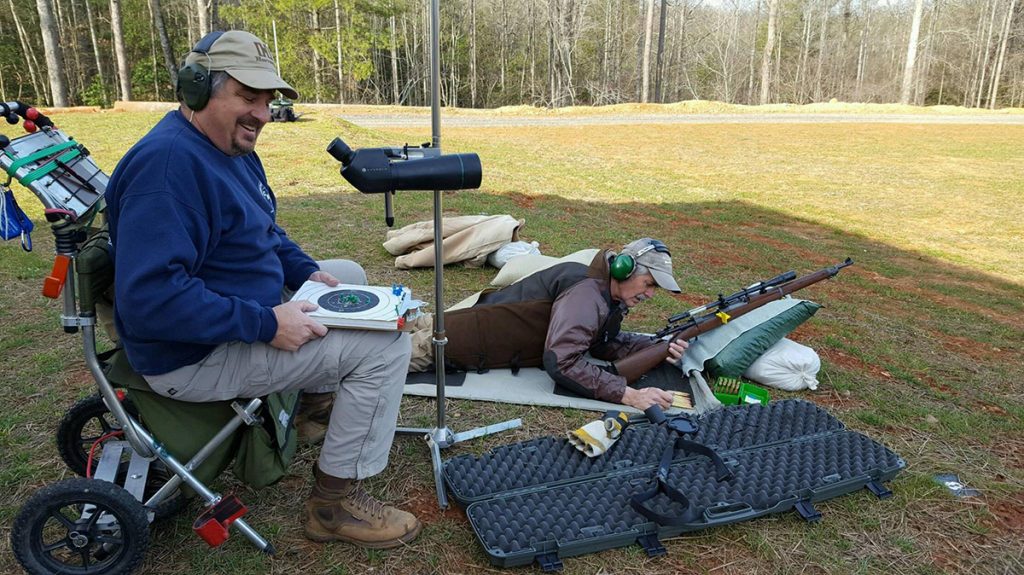 Ken Lore (left) and Lygren (right) at the last match they shot together, February 2017, during a Vintage Sniper Team Match at their Catawba Valley Club. Lygren wore Lore’s coat during the event.

Before they had the chance to realize their dream, Ken Lygren, 68, of Crouse, N.C., passed away on Oct. 11, 2017, after a battle with cancer. Lygren left behind his wife Deborah, two sons, Kristian (Barbara) Lygren and Erik (Angell) Lygren, as well as one brother, Steven Lygren, and one sister, Randi Haverstrom. He also leaves all of the memories in the minds of those he met during his incredible time on Earth.

Lygren was born Sept. 6, 1949, in Brooklyn, N.Y. He grew up to become a contractor and served for 32 years in the Huntington Manor Fire Department where he was a fireman as well as the commissioner. Eventually, he moved to North Carolina to retire and help his son with a new contracting business of his own. 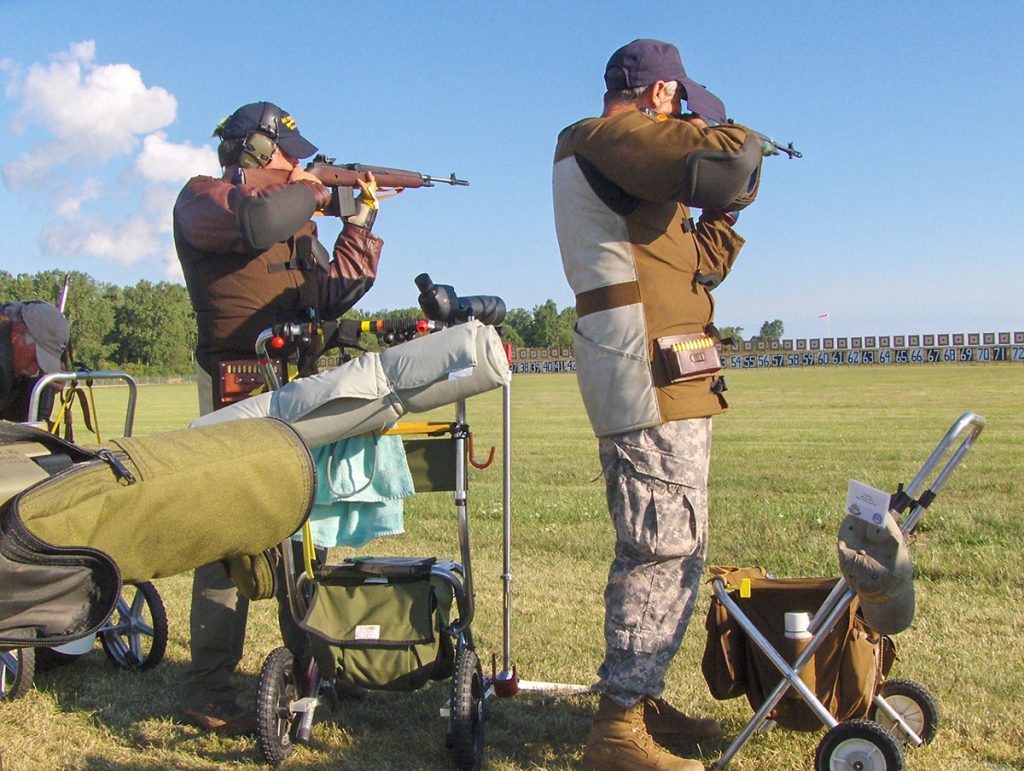 The duo’s first time to the National Matches and the first ever team match, Camp Perry 2012 Hearst Doubles.

While in North Carolina, Lygren became a member of the Howards Creek Volunteer Fire Department and Lincolnton Sportsman Club and ultimately joined the Board of Directors for the Catawba Valley Wildlife Club, where he and Lore first met.

Back in 2006, a group at the Catawba Valley club started a CMP chapter, and Lygren was quick to sign up – firing in the very first match. Lore had been a club member for years but had never even heard of the M1 Garand, which is used in the CMP’s primary rifle event. He went to watch one of the CMP matches at the club and immediately ordered an M1 that arrived a few months later. It was during that time he and Lygren became better acquainted. 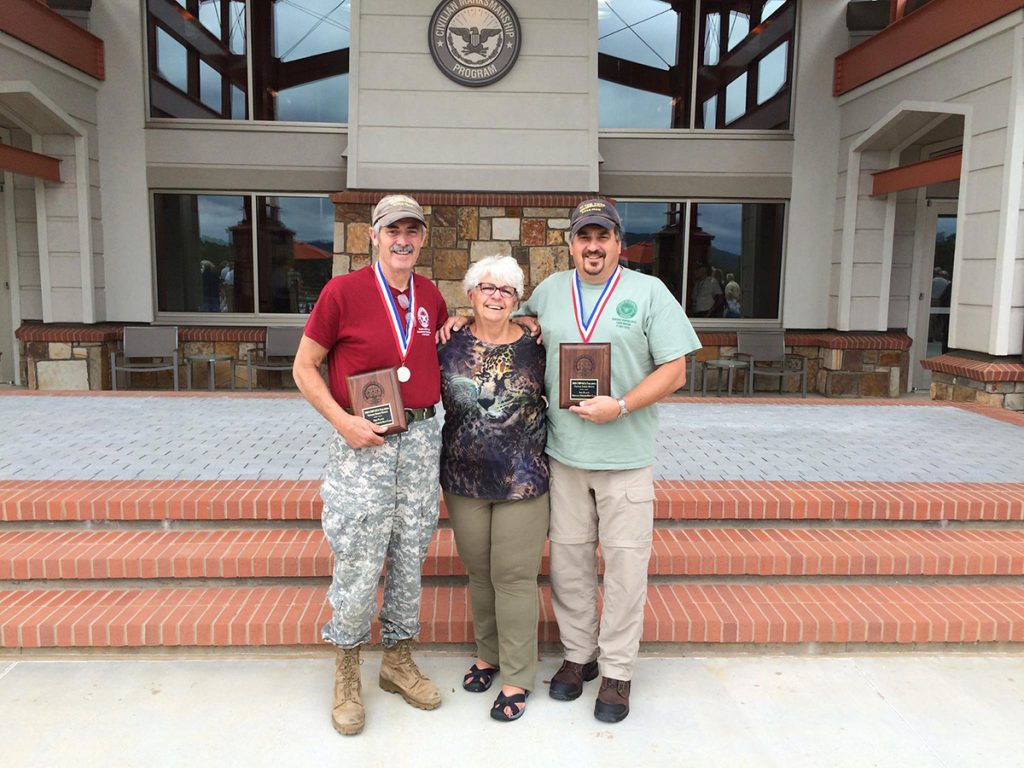 Lore saw Lygren as a New Yorker, or “Yankee” as they’re called in the south – a straight-talking guy who would speak with honesty, whether good, bad or indifferent. Lore was also originally from the north and now living in a southern world.

The kinship bonded the men.

“We kind of hung together and took some ribbing from the ‘Southern boys,’” he said. “We figured, that’s okay, someday we’ll show them how us ‘Northerners’ can shoot.” 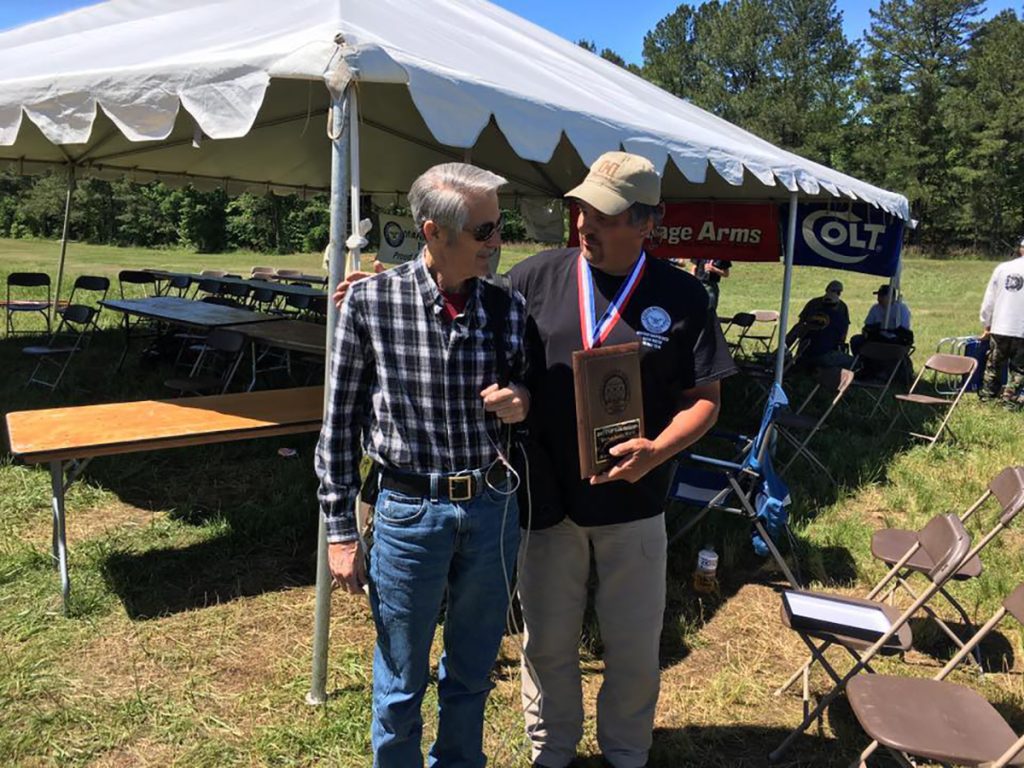 The Kens spent the next few years as “passing friends” at the monthly CMP club matches, banding with one another as they often received playful razzing from the locals.

They spent much of their free time together. For years, they would shoot NRA Highpower in Charlotte on the first Sunday, two club CMP matches on the second Saturday and a CMP Match or two with M1 for Vets in Statesville, N.C., on the fourth Saturday of the month – all while Lore was working 55 hours per week managing a 24/7 manufacturing plant.

“On the firing line, Ken was encouraging. When I’d pull a bad shot or miss, he’d come back with a positive spin on it,” Lore said. “Early on, I’d be ready to give up when I screwed up. Ken would always say, ‘Don’t quit – don’t walk off that firing line. Finish every course of fire because you’ll learn something.’” 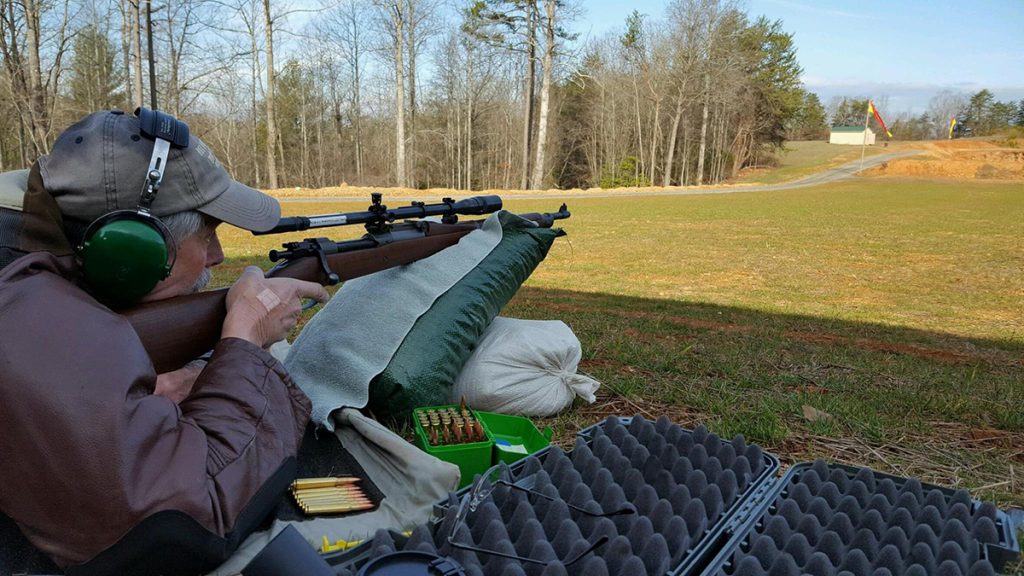 Lygren on the M1941A1 during a club Vintage Sniper Match – his last. The shed in the background was built by Ken and his sons for the club, free of labor charge.

Lore said Lygren also liked to shoot the fourth relay, always, because he liked to pit first, then score, then shoot. Lore was happy to follow along with his friend and always fire in Relay 3 so they could be squadded together on the same firing point.

As Lore began to spend more time with Lygren, he found out that he was active with the M1 for Vets Program, volunteering and shooting with the team. He then realized that several guys from the club were shooting the Eastern CMP Games at Camp Butner, N.C., including Lygren, who was again ready to shoot any chance he got – even present as a competitor at the inaugural Eastern Games event.

“I didn’t think I was good enough to go, but in 2010, they convinced me to go,” Lore said. “Ken was a big part of that, with his typical ‘You think those guys are better than us?’ statements.” 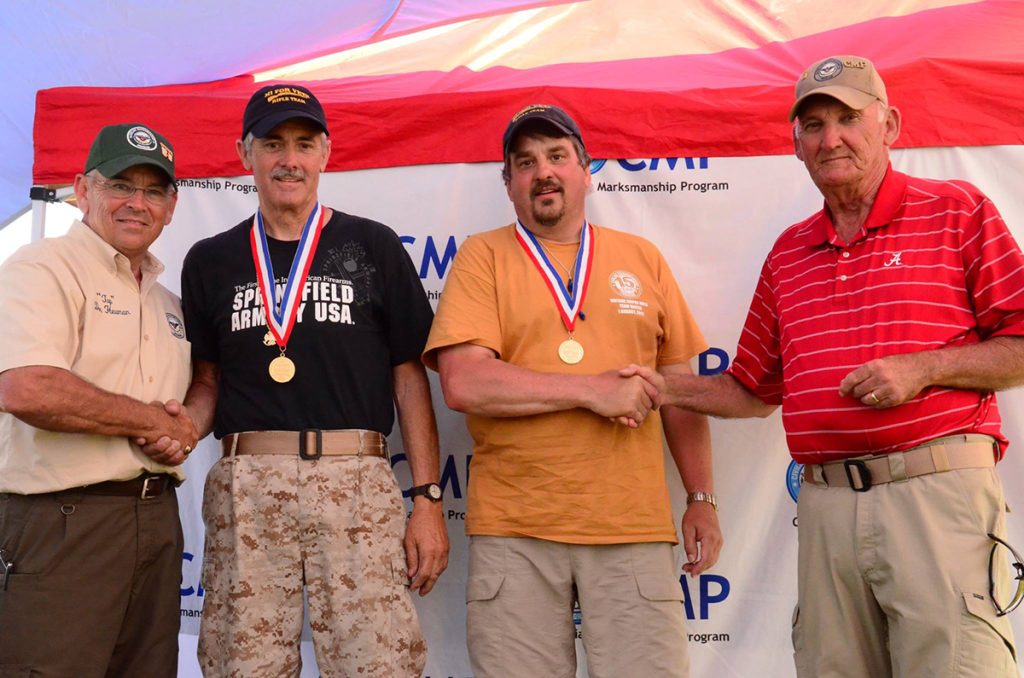 With his charm, Lygren then talked Lore into registering with him in the Vintage Sniper team match. There, on the firing line, is where Lore says the beginning of the true friendship occurred.

“I never forgot that, and I try to pay that back in the years to come,” he confessed.

From there, the men consistently fired in matches together, even earning a gold medal in Vintage Sniper at Eastern Games in 2015 – one of Lore’s fondest memories. 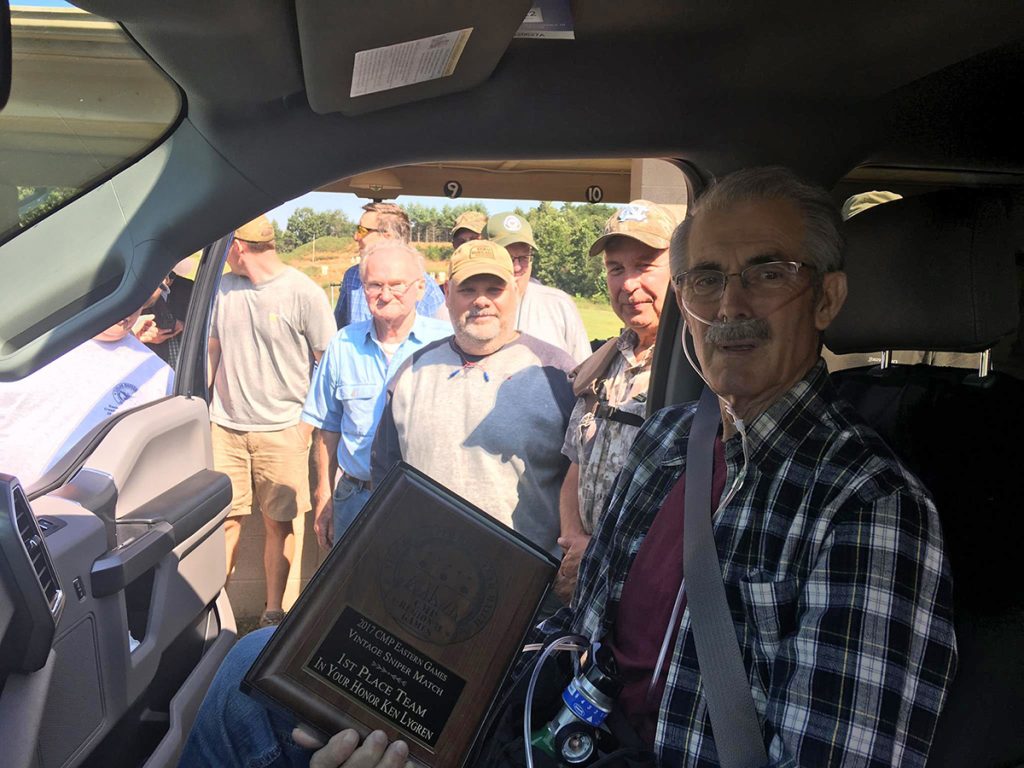 CMP recognized Ken's contribution to the club’s Vintage Sniper Team Match in September. Members gave him a small ceremony at the local club match. Lore said this was “a proud moment for Ken and all of us.”

With Lygren’s declining health, he wasn’t able to shoot in any CMP matches with Lore in 2017, except one – a Sniper match held early on at their local club. Lore admitted having to head to Eastern Games for the first time without Ken was “different.”

“We had always traveled together, so it was a bit of a shock for me,” he said.

As hard as he tried, the September 2016 GCA Match and the Talladega 600 were brutal on Lygren and served as his last moments on the firing line.

“There are a lot of really good people in this sport. The whole time I was going to these competitions, Ken wanted a download of how I did. Here he’s dying, but he still wanted to hear about the people, friends we had made, and how I did in each match,” Lore recalled.

Lore had been aware of Lygren’s illness for some time, learning of his condition after asking the former contractor for his help on an upcoming house project.

“I can be a bit difficult to get to know, but we had previously hit it off so well on the range that I asked him to quote some renovations to our home. I knew I could trust Ken to work in our home without us there, so it was a good fit,” Lore explained. “When he came one evening to tell us what the cost would be, he told my wife and I that he had a ‘bit of a problem,’ but it wouldn’t get in the way of the job.”

The problem was his upcoming treatments and surgery. Though hopeful, Lygren’s diagnosis worried Lore and brought up memories from his past.

“Twenty-five years prior, I had lost my previous best friend to cancer, so I was really concerned for Ken long-term,” he said. “Ken and my prior friend could have been brothers, both were take-charge type people, never complaining and kept positive attitudes.”

Through the illness, Lygren and his son were able to complete the job on the house, then two more in the following years. Now, with his work etched into the bones of the property, Lygren will forever be a part of Lore’s home.

“Many, many competitor friends asked and stayed in touch about Ken’s health and provided support and good wishes for Ken, through me, at these events,” Lore said. “A few went way out of their way to make sure I competed at my best, namely Steve Cooper (CMP North general manager and Lore’s Sniper teammate in place of Ken at Camp Butner) and JJ O’Shea (of M1 for Vets), along with Amy Cantu (of the CMP) – making sure I competed at Camp Perry.”

While attending the services and the funeral with those who knew Lygren best, Lore discovered more about his shooting partner from the many lives he touched. The local fire department created an impressive and respectful display at the funeral, and Lore learned his friend was a true hero – having been credited with single handedly saving three lives when he was a firefighter in New York.

“Over the years, all the hours, days and weeks we traveled and competed 24/7, he never mentioned that. I admire that humility,” Lore said.

“Same goes for encouraging me to shoot that first CMP Vintage Sniper Match. There were better shooters in the club than me, but he asked me, and we were the only ones in our club that shot it for years,” he added.

Nearly all of their CMP club members attended the viewing and funeral. Lore’s competitor friends living in surrounding states have checked in on him to see how he’s doing, which he says he absolutely appreciates. Still, he can’t help but think of the one who is no longer around to check in.

“That seems a bit strange, because I’m okay – it’s my best friend that suffered and didn’t make it,” he said.

Going from here, Lore plans to keep on shooting – living with the memory of the man who got him started with vintage rifle competitions in the first place, who loved every minute he got on the line and who made a significant impact on his life along the way.

“Ken was well liked,” Lore said. “He was a decent guy that loved shooting and the people that put on and ran the matches. He appreciated the ‘away from home’ work the CMP people did, with a smile, so we could have a good time. He talked of that often.”

“I’ll miss all of the above and more,” Lore added.

The post ‘The Kens’ From the Range: Remembering a Departed Friend appeared first on Civilian Marksmanship Program.