The curious case of the gun that wouldn’t bark.

Popped out to the range for a brief bit of testing this morning. And found something interesting.

Last time I was out, I ran into a problem with my Springfield EMP4 (9mm, 1911 platform), which I got earlier this year. After a couple of rounds of good Self Defense ammo, I started getting light primer strikes and FTF. When I got home and checked it, I found a small disk of metal stuck to the end of the firing pin, which was preventing getting good strikes. I removed it, cleaned the gun (including the firing pin assembly), tested it with a case which had only a primer in it, and everything looked fine. But of course I didn’t want to trust the gun for carry until I had proven that it was working fine at the range. Hence today’s trip.

Started with my reloads, and everything was fine. Switched to Buffalo Bore 124gr +P+ SD ammo (my preferred carry ammo for most of my 9mms), and the first few shots were perfect. Then I had another FTF. I cleared the gun, checked, and sure enough, there was a small disk of metal on the firing pin again.

Knowing what to expect, I just popped the disk off with a knife, reloaded, and went back to shooting. It happened again after three or four shots.

This time I cleared the gun, popped off the disk with my knife, and switched ammo. I went to Underwood 124gr +P+ ammo, and … yup, happened again. Here’s the gun:

You can see the disk of material stuck to the firing pin.

And I found the brass from that shot and one of the previous ones: 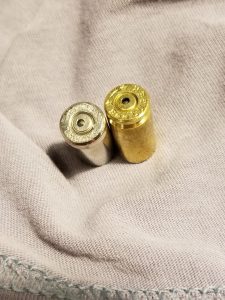 Underwood on the left, Buffalo Bore on the right. You can clearly see the punch through the base of the primer.

Since I haven’t had any problems with my standard-pressure reloads, I’m assuming that it’s the over-pressure which is causing this problem. Both the Underwood and the BB ammo are *really* hot. But I wanted to check everything out again before shooting the gun any more. If everything looks good, then I’ll start with standard pressure loads and then slowly step up to hotter loads. I expect that will resolve the issue, and I don’t mind carrying SD ammo which is a little less powerful — shot placement is more important than power.

And ammo that works consistently is the most important thing of all.