CAMP PERRY, Ohio – During the weekend of July 14, the new Advanced CMP Highpower Clinic made its first appearance at the 2017 National Matches. Formerly held by Remington, the new class is designed to provide a fresh interpretation of course material, led by members of the CMP highpower team. Members Nick Till, Robert Taylor, Johnny Fisher and team captain Sarah Rozanski collaboratively worked for months to create an enhanced advanced clinic that gives participants a renewed perspective through hands-on instruction and class participation.

“It went pretty well. I think we’ve gotten a lot of compliments on how we did it a little bit differently,” said Rozanski. “We were excited and honored to do it. Me, as a team captain, I’m lucky to have the team that I have – that they’re all willing to help and do anything.”

With each member of Team CMP living in California, Michigan and Alabama, respectively, the planning process became somewhat challenging at times. But, eventually, each found a niche that added a unique element to the course. 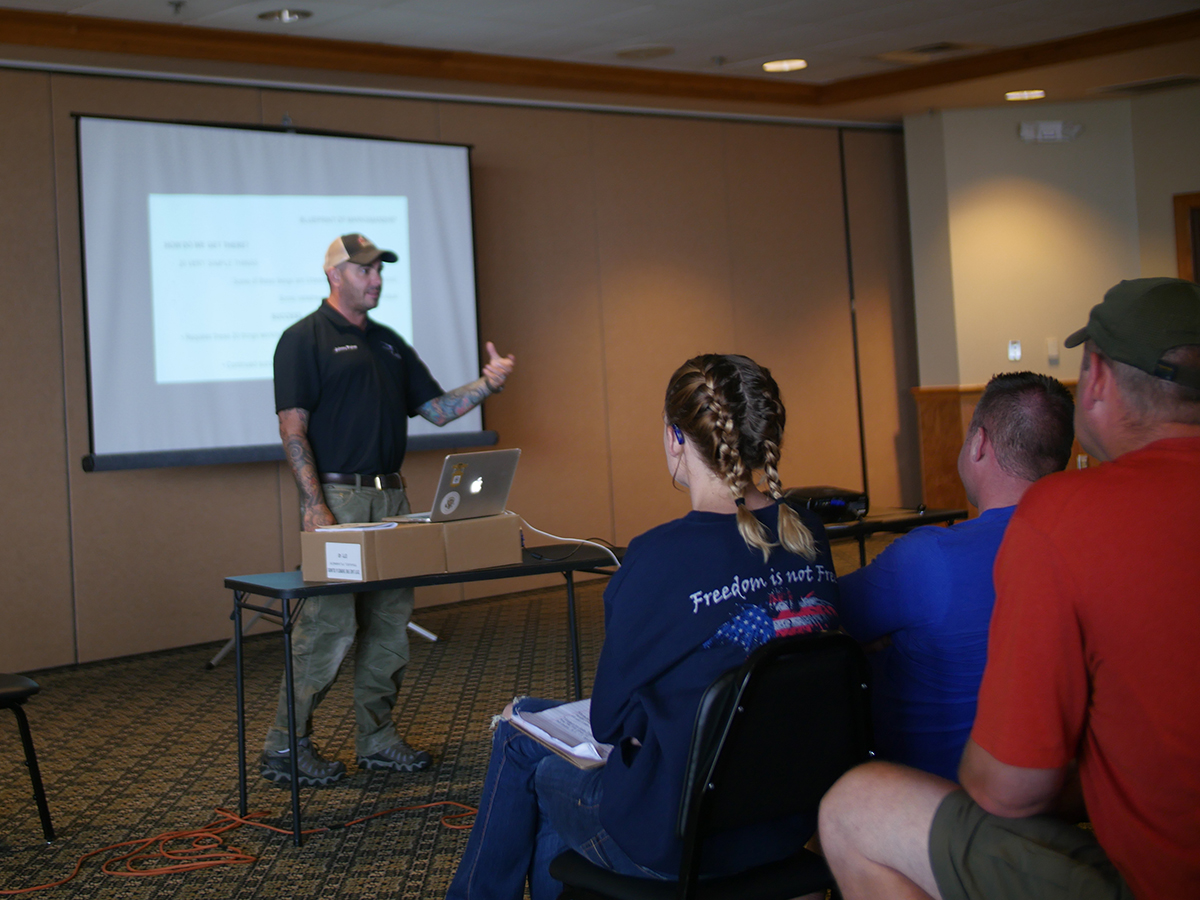 Johnny Fisher, who is an expert at presentations during his everyday job, put together and explained slides and materials, while Robert Taylor, a junior shooting coach and instructor in California for adults and juniors, took the helm for class work and discussion.

Till and Rozanski, both accomplished marksmen, added incite during class dialogue and on the firing line. Rozanski said one of the most important things she wanted for the course was input from all members of the team in order to provide a well-rounded curriculum for students as well as to allow each experienced Team CMP member to have a voice. 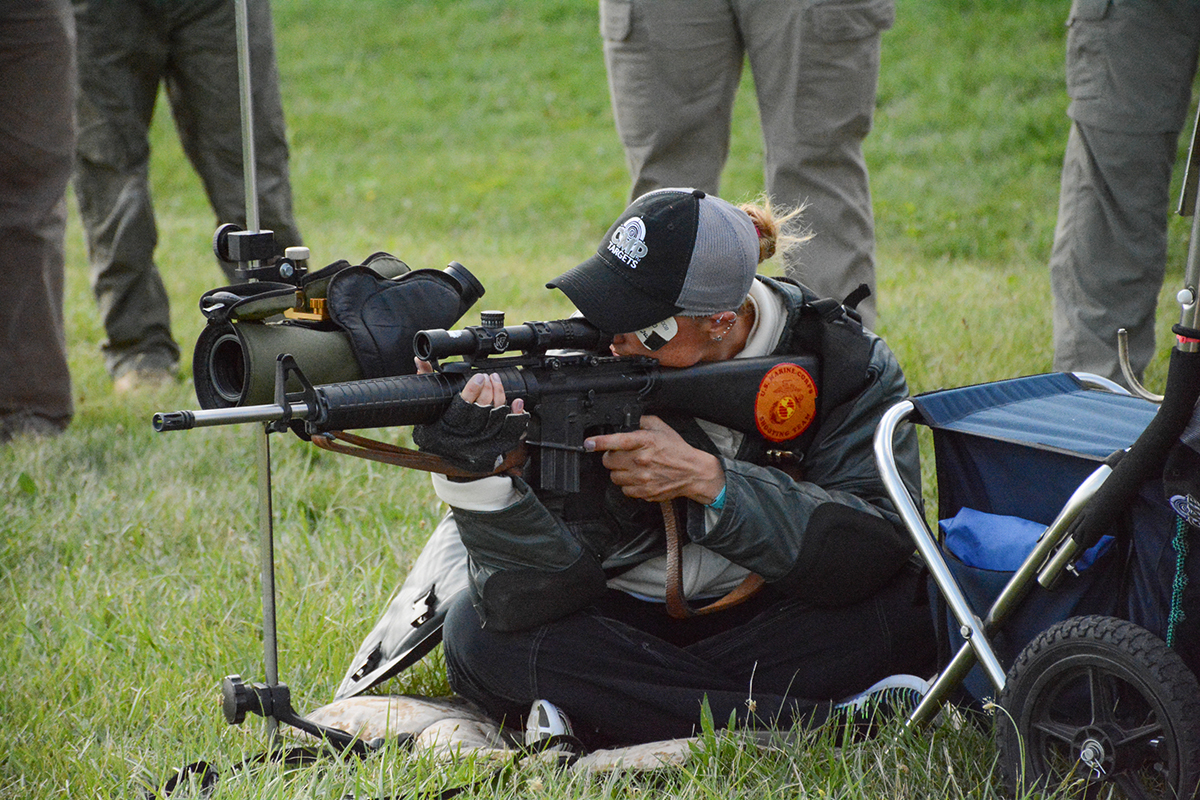 Team CMP captain Sarah Rozanksi emphasized the evolving course material the class will provide to give students a fresh perspective each year. 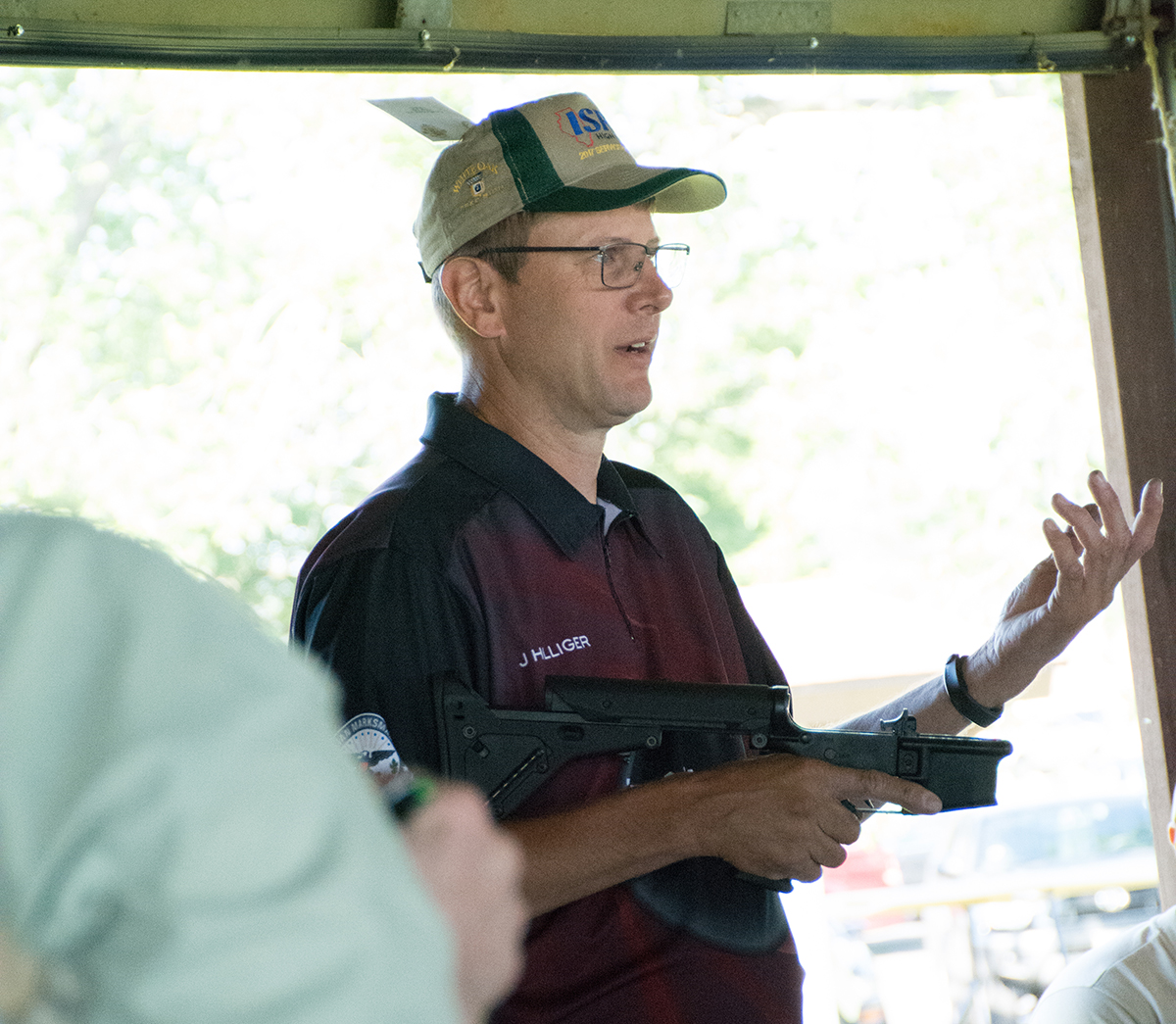 Each year, the class will feature guest instructors who are experts in specific areas of interest.

Team CMP plans to have a variety of guest instructors each season to give participants a new set of viewpoints year after year.

“I think when you get to a higher level of shooting, it’s not a one-size fits all kind of thing,” Rozanski said. “We hope to have an evolving product so it doesn’t become stale, doing the same things over and over again.”

Rozanski, who had helped previously with the Remington Advanced Highpower Clinic as a member of the Remington team, says the new course Team CMP designed is more hands-on than the previous format, with a focus on more individual interaction.

To meet the needs of each participant and allow more time for instruction drills, the class was split into groups of five with an instructor assigned to each group. Each instructor would begin to teach a position, then the groups would rotate to a different instructor.

Saturday brought training in position work and mental game, along with one of the most successful course items – wind reading. Bob Gill, who often shoots long-range events, conducted the wind reading lesson. Groups also went to the back of Rodriguez Range, where the juniors were participating in the U.S. Marine Corps Clinic, to guess what the wind was doing based on shots. 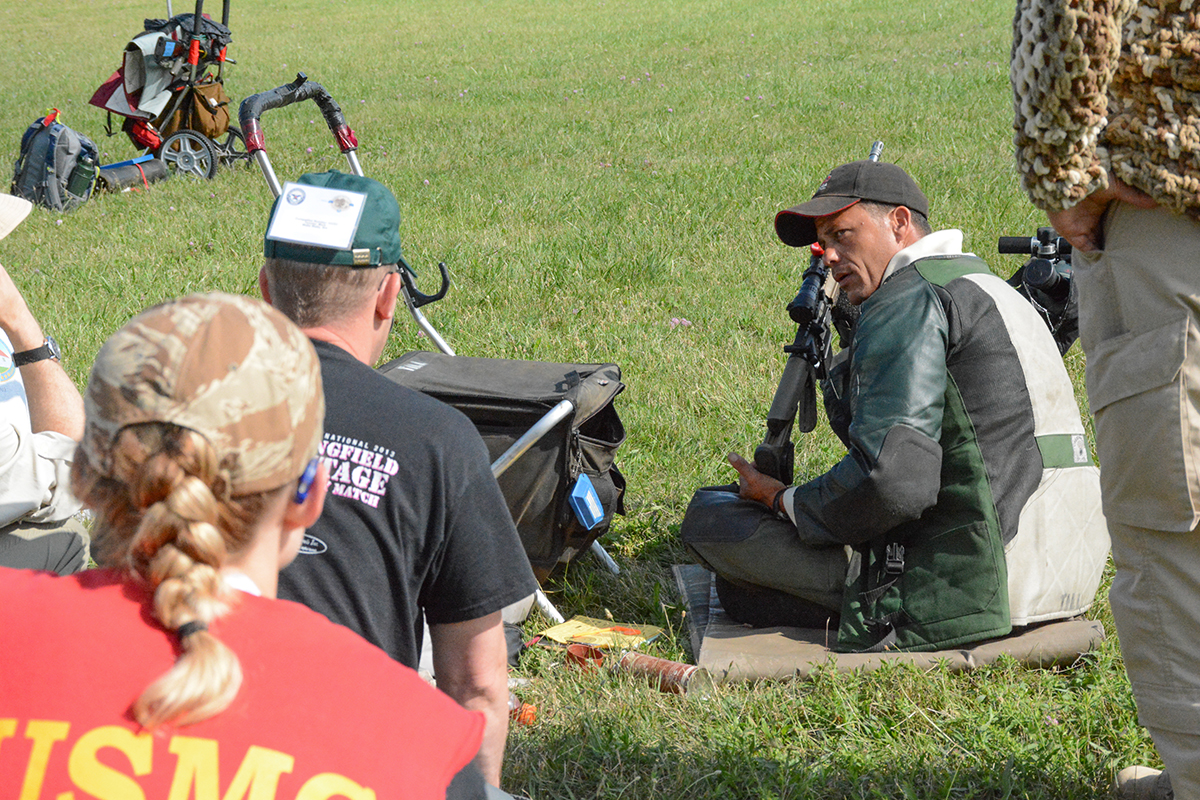 Nick Till instructed students on the firing line during dry-fire drills.

To practice hold, Till even brought in lasers so participants could dry-fire offhand and see what their shots were like, then critique from there.

“I think they learned a lot from it. I’m a visual person, so if somebody explains to me what I’m supposed to see, unless I really see it as they’re explaining it to me, I won’t understand it as well,” Rozanski said. “A lot of people said they really appreciated that.” 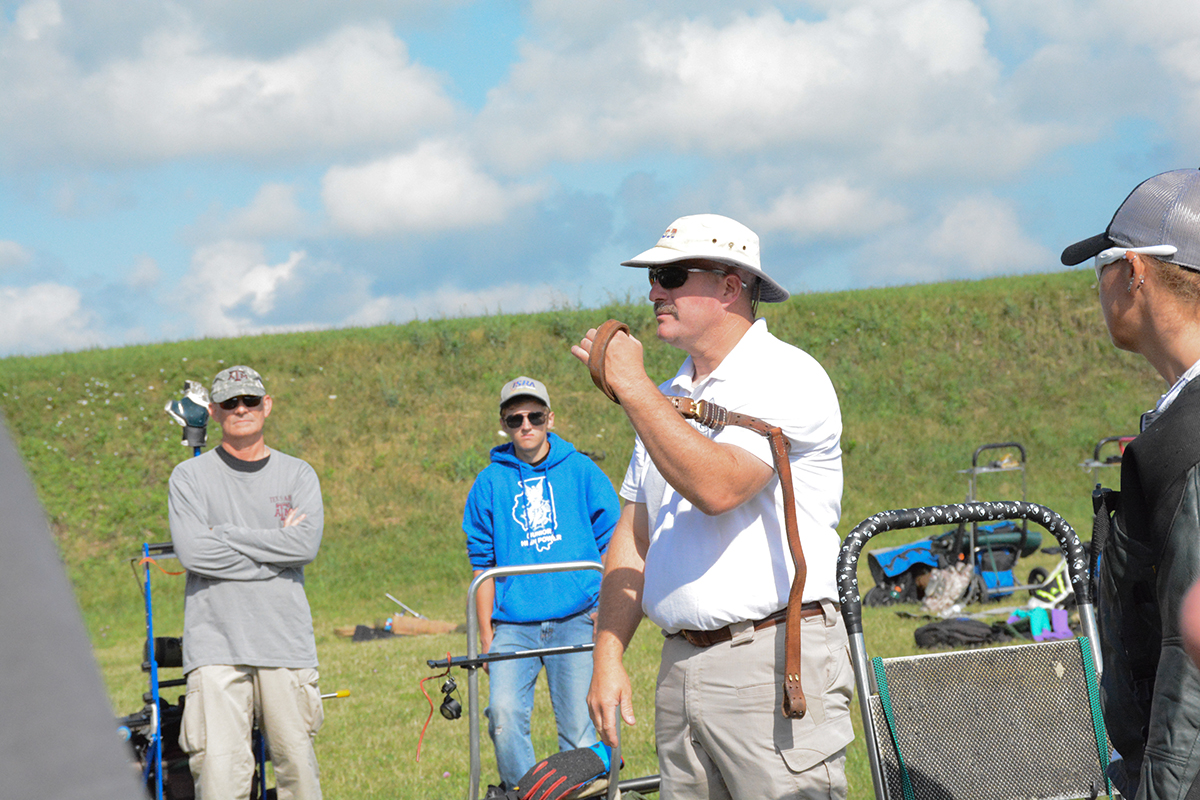 Robert Taylor (center) has been an instructor of adults and juniors in California for many years.

Sunday served as more of a question and answer period for the 35 participants in the class, which included a few juniors. Junior coaches involved really found value in the new format of the clinic, saying they foresee themselves having their shooters go to the Small Arms Firing School, then the Marine Corps clinic and finally move on up to the Advanced class.

To continue the improvement of the course, surveys were given to each participant. Team CMP will carefully read over each one and reconfigure the class as needed to be able to better serve the needs of the students and tailor the clinic to their expectations in the future.

“We’re going to be more apt to changing things to curtail to what they want instead of just giving them the same class over and over,” Rozanski said. “Also, out of that, we’d like it if participants came one year, then we’ll change something the next year or we’ll have different guest instructors, so those people will want to come back again. We hope to get new people and repeat people as well.”

Unlike the past National Match Advanced Clinics, each instructor is a civilian with no military experience. According to Rozanski, it’s a rare opportunity to find a clinic for civilian training, since there aren’t many available once aging out of the junior class. And although those stemming from the military receive some of the best marksmanship education around, she added that having civilian insight allows a unique appreciation for the sport.

“For us (civilians), it’s a hobby, and we understand that they’re taking time from their vacation and time away from their kids to come out here, and we want them to get the most out of it,” she said of the class participants. 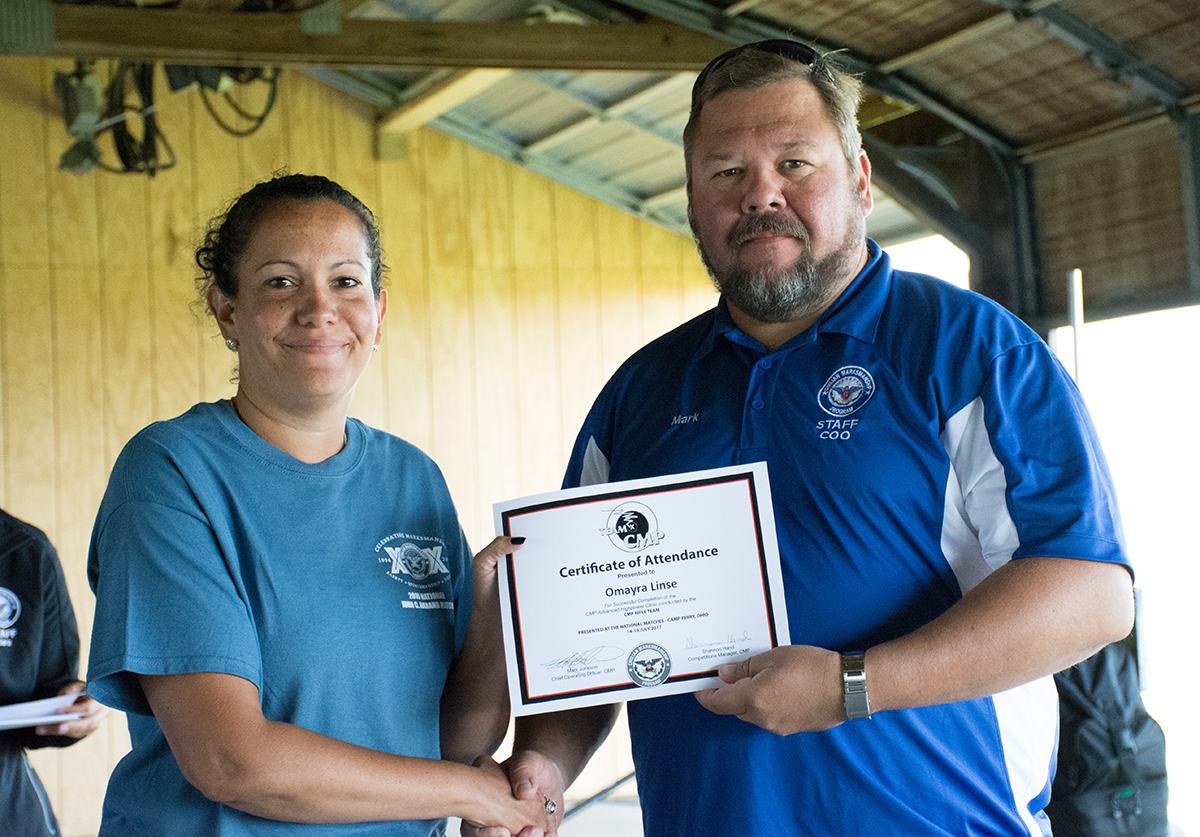 Each participant in the course was presented a graduating certificate by CMP’s chief operating officer, Mark Johnson.

To those who have already taken the course, Rozanski invites them to come and give it another try, saying, “We’ll be teaching different things. Our clinic isn’t as regimented, so if one person teaches a class and then someone else comes up and teaches it, they might explain it a little differently and may learn more. That’s why we want to rotate out our instructors – so it’ll be an evolving thing.”