I had the good fortune to get together with a couple of friends and try out some new 9mm guns we’ve each gotten recently. Consider this a brief review. In each case we shot a mix of standard Remington ball ammo and Buffalo Bore 124gr +P+, which is my usual carry ammo and about the ‘snappiest’ factory 9mm on the market in my experience. 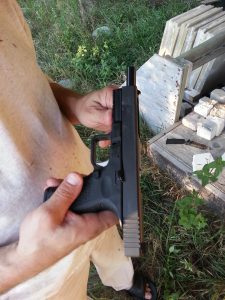 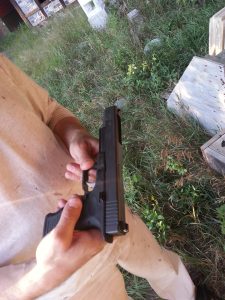 Now, the G17L (Longslide) has been around forever, and you can easily find a lot of reviews of it all over the web. But this was the first time any of us had shot one.

This was a brand-new gun, straight out of the box. It had not been fired before.

I own several Glocks, and have shot a lot more. I’m not a huge fan of their ergonomics, though the Gen 4 guns are typically better for me than earlier models. Even then, I usually alter the shape of the grip in ways to better fit my hands. More on that in a bit.

It’s interesting shooting a Glock which has been optimized more for target shooting than for combat use. The sight picture is different, and the rear sight is adjustable. The adjustable trigger has a really L O N G pull which I found very kinesthetically confusing, it was so different from the usual Glock trigger.

That said, I liked the gun. Typical Glock functionality. We did have to adjust the rear sight, since all three of us (two of whom are decent shots, and the third is quite good) were getting consistent hits about 6″ left of the bulls-eye at 15 yards. Once we made the adjustment, it was easy to keep on target. With some practice to get used to the different trigger pull (or adjusting it to suit my preferences), it’d be a decent target pistol. But it’s not something I would run right out and get, though it handled both the ball ammo and the SD rounds without the slightest hiccup.

I had tried one of these earlier this year, but it had the ‘slim’ backstrap on it. I liked how it felt enough to go ahead and order one after I shot that gun a second time. I expected that I would like it even better with the ‘swelled’ grip.

And I was right.

As configured, it is the most comfortably-shooting Glock I have ever tried, and tamed the stout Buffalo Bore rounds just fine. It’s almost as comfortable to shoot as my beloved Steyr S9 (my review of the M-series; the S-series is just slightly smaller in barrel and grip length). If you haven’t had a chance to try one of these Glocks with the Timberwolf frame, you’ve been missing out. I just wish they made the things for the .45 caliber Glocks … though a combination of some judicious filing and/or a slip-sleeve have made the Gen 4 G30S and G21 guns I have tolerable.

Speaking of altered Glocks … here are a couple of G43 Glocks to check out:

And one which has had a little work: 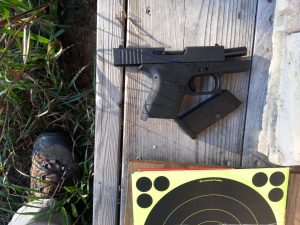 Look particularly at the backstrap: it’s now almost complete straight. My buddy took off most of the swell towards the bottom of the strap using a rasp and then sandpaper. He has little, meaty hands, and this change allows him to get much better purchase on the gun, with much better trigger position. He’s also planning on increasing the undercut on the trigger guard to accommodate his finger better.

Personally, the straight backstrap made it more difficult for me to get a good grip on the gun, and shooting the +P+ ammo out of it was downright painful for me, while the same ammo out of the unaltered G43 was just mildly annoying. The owner of the standard G43 didn’t have a problem with either ammo, and it was clear that my friend with the altered G43 was *much* more comfortable shooting it than the standard version.

So if you’ve ever thought about adjusting the grip of a Glock to better suit you, know that there are options out there which might be worth exploring.

Lastly, one of my friends brought a new Ruger LC9s — the striker-fired version of the classic LC9:

This gun has been out for a couple of years, but again it was new to all of us. I wasn’t particularly impressed with shooting the original LC9, primarily for the reason others have said over the years: a long & awkward double-action trigger. That made it difficult to shoot, and almost impossible for me to shoot accurately, as small as it was.

The LC9s, however, was a whole different experience. The trigger was light and crisp, easy to control and stay on target with. The gun is still smaller than I care for (my pinkie finger was completely under the bottom of the extended mag), but it managed to handle the recoil from the Buffalo Bore ammo just fine.