Recently the BBTI crew got together to shoot some historic rifles. I’m not going to go into a lot of the details about each rifle, since there is plenty of information available about each online. But I thought I would share a few pics, some video, and my thoughts about each gun.

The first is an original British .577 Snider-Enfield rifle. This is the “Mark III” model, and dates back to 1866.

The .577 Snider-Enfield is a single-shot, breech-loading rifle. The Mark III has a lock on the side latch which secures the breech block in place. A side-hammer strikes a diagonal sloping firing pin to ignite the primer on the metallic cartridge. The barrel is about 36″ long, and the overall length of the rifle is 54″.

Here’s the rifle as seen from above:

Operation is simple: draw the hammer to half cock and unlatch the breech block and flip it open. Drop a cartridge into the “slide”, then push it forward into the chamber. Close the breech block and latch it. When you’re ready to fire, cock the hammer the rest of the way (it has a very short throw, so going to full cock doesn’t take much). Aim, fire. Here, see for yourself:

Recoil is fairly mild. The cartridges use a modern black powder substitute, and have the typical black powder smooth impulse rather than the sharp impulse of modern gunpowder. It shoots a 480gr soft lead bullet at about 1200fps, for an energy of about 1500ft/lbs (about half of what a modern hunting rifle has).  Here’s what the cartridge looks like: 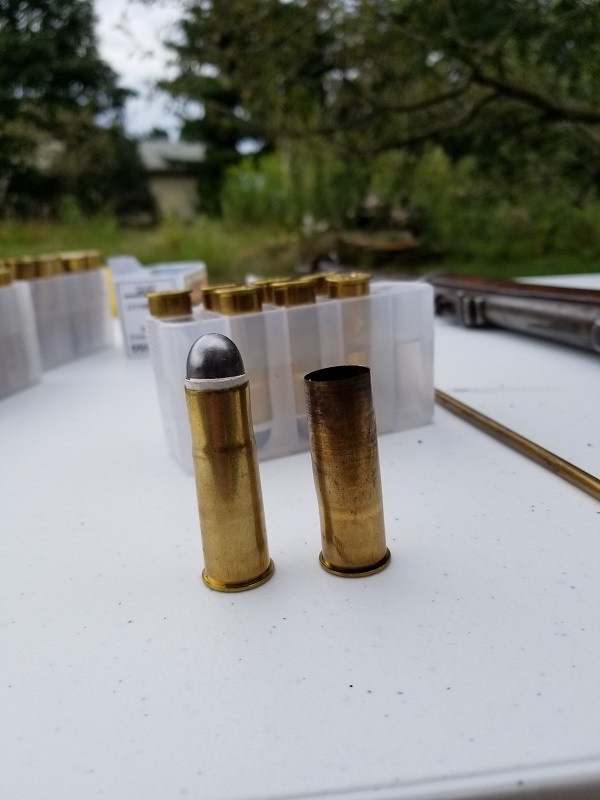 Note that the fired cartridge case is more straight-walled than the unfired cartridge. The cases stuck in the chamber, and had to be knocked loose with a ramrod to be extracted. But you expect some minor issues like that with a gun that is more than 150 years old.

Overall, it’s really a very pleasant piece of history to shoot. If you get a chance, do so.