CAMP PERRY, Ohio – SFC Brandon Green, 32, of the U.S. Army Marksmanship Unit, fired a score of 2368-97x to earn the championship title in the 2400 Aggregate Rifle event held during the inaugural Civilian Marksmanship Program (CMP) Cup Matches. SFC Green is a gifted competitor who has collected a number of National Match awards, including multiple overall service rifle honors. As a junior, he was the recipient of Distinguished Air Rifle Badge #1– fittingly continuing his tradition of being a leader in CMP events as the first winning individual competitor of the Cup Match legacy. 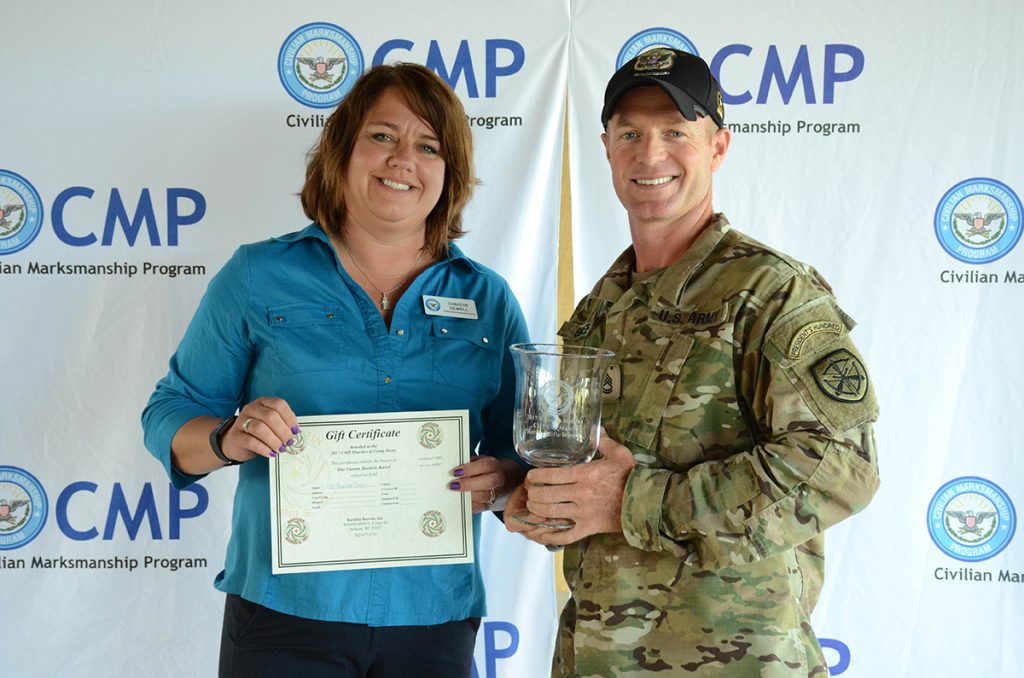 SFC Brandon Green was the overall winner of the 2400 Aggregate competition at the CMP’s first Cup Matches.

“I’ve been very fortunate to get support from friends, family and the ROTC programs in high school, and of course from the CMP and NRA as well, which kind of catered to someone like myself, coming in as a junior and shooting all the way up through the highpower sports,” said Green of his marksmanship career. “I’ve also been lucky enough to gain so many opportunities from being a part of the Army and the AMU.”

“It’s been a long learning journey, but it’s been a good one,” he added.

The CMP Cup Matches, which kicked off the 2017 National Matches at Camp Perry, were introduced as an extra series of elite match and service rifle competitions. The schedule included a 4-Man Team Match, three consecutive days of 800 Aggregate matches and an EIC Service Rifle Match. A 2400 Aggregate award was also given to the high competitor of all three combined 800 Aggregates. 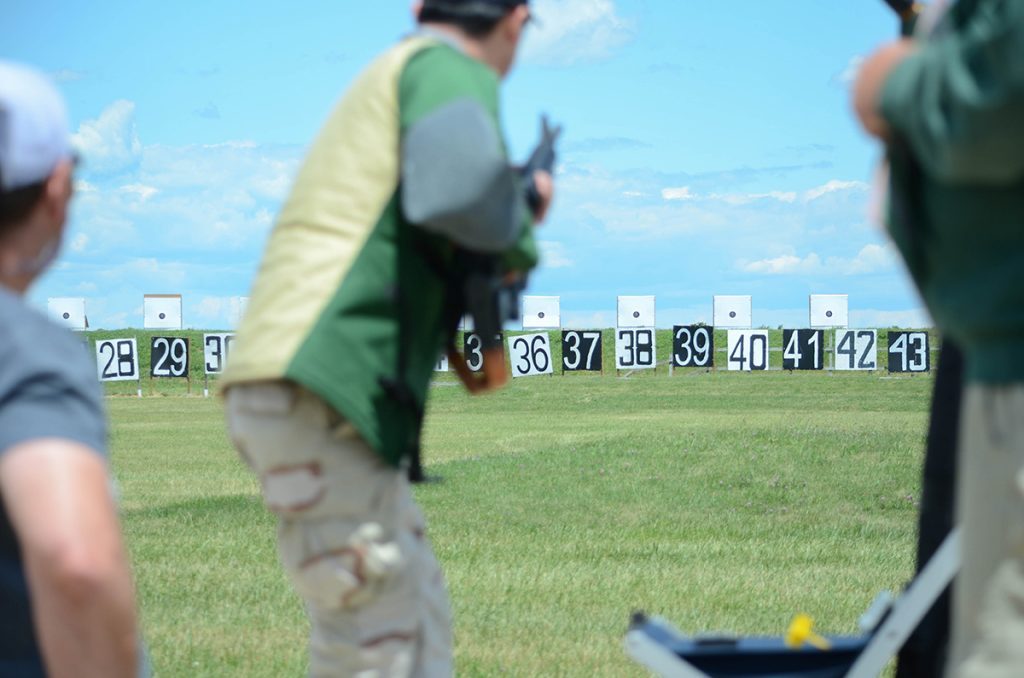 The 4-Man Team Match was the first of an entire week full of successful events fired entirely on the CMP’s electronic highpower targets.

The CMP Cup Series week was one for the history books – establishing a new era of matches at Camp Perry and serving as the first successful competitions ever fired on the base’s ranges using CMP’s mobile electronic targets. Over 36,000 rounds were sent downrange, with less than 50 questioned by competitors throughout the week.

For many, the Cup Matches provided an initial look at the CMP’s target system. Even Green revealed he had never shot a match on this type of highpower electronic targets. He went on to say he believes the minor issues the CMP has experienced will soon be resolved and made ready for the future of competitions.

“I watched the very first shots go down range through my spotting scope, I saw the bullet holes on paper – everything was right on track from what I saw,” he said. “It was pretty neat to see them work and to see them work so accurately. I was happy with that.”

From here, Green plans to keep on perfecting his game – sticking to a consistent practice schedule to prepare for another round of Camp Perry competitions during the National Trophy Rifle Matches, set to begin July 16 with the new Oliver Hazard Perry event and continuing through July 25.

Also making marks in the 2400 Aggregate match during CMP Cup Week was SSG Amanda Elsenboss, 28, of the Army Marksmanship Unit, who earned the High Woman Award, as well as Serena Juchnowski, 18, of Richfield, OH, who snagged the High Junior credit. Paul Terrence, 65, of Cleveland, OH, was named the High Senior of the event. 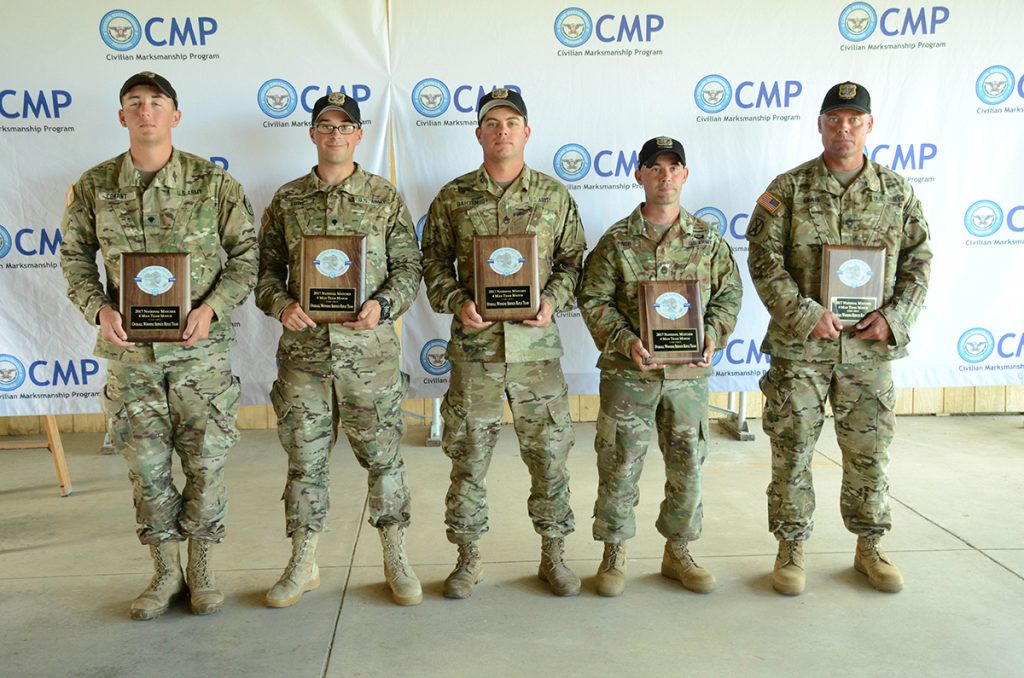 U.S. Marksmanship Unit Craig was the winning team in the 4-Man Team Match.

SPC Lowe was also the winner on Day 1 of the 800 Aggregate Match and finished second overall in the 2400 Aggregate competition. A frequent competitor with the U.S. Army Marksmanship Unit air rifle team, Lowe also competed in the men’s 10-meter and 50-meter air rifle competitions during the 2016 U.S. Summer Olympic team. He has been firing with the service rifle athletes since March and has been able to positively make the transition between disciplines. 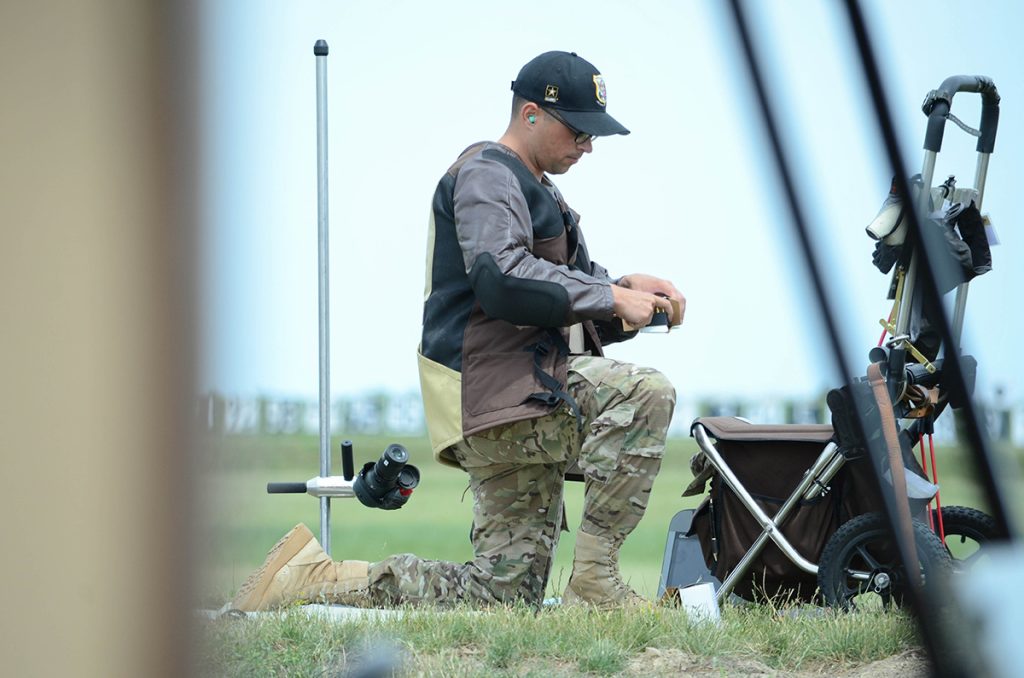 SPC Daniel Lowe earned second in the 2400 Agg. match, along with winning Day 1 of the 800 Aggregate competitions.

“I’ve gained a lot from cross-training with the service rifle team,” said Lowe. “It’s a different game, but all the fundamentals are the same, and that’s why I’ve been so successful.”

Fellow Olympian, SGT Nick Mowrer, 28, of the U.S. Army Reserve, came in third overall in the 2400 Aggregate and also won the third day of the 800 Aggregate competition. SGT Mowrer is another talented athlete who bounces between disciplines, having attended the 2012 Olympic Games in the 10-meter air and 50-meter free pistol events.

In the CMP Cup EIC Match, Sgt Mark Windmassinger, 30, of the U.S. Marine Corps, was the overall winner with an outstanding score of 497-18x. Sgt Cody Luckinbill, 26, also of the Marine Corps, fired a score of 491-14x to become the high non-distinguished competitor – earning fourth place overall.

For a complete list of results, visit the CMP Competition Tracker page at https://ct.thecmp.org/app/v1/index.php?do=match&task=edit&match=15052&tab=results.

Information on CMP Targets can be found at http://thecmp.org/competitions/talladega-marksmanship-park/cmp-target-systems/.