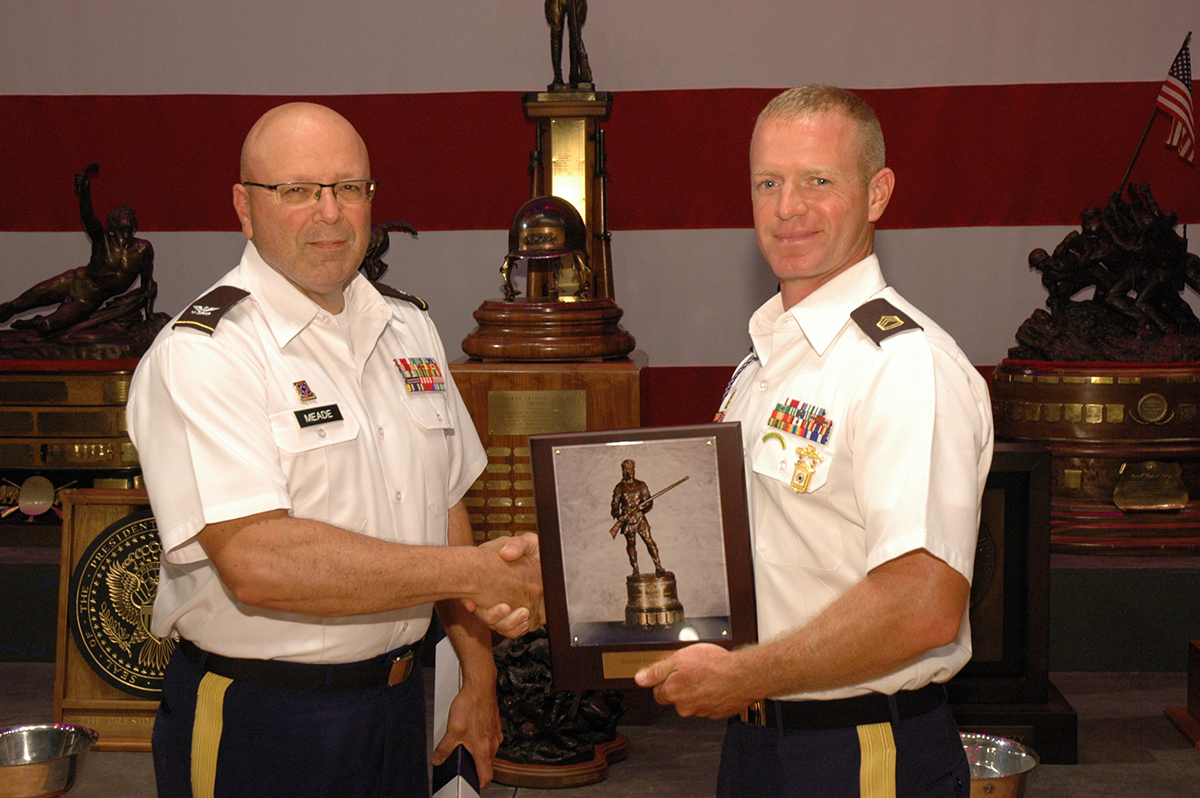 SFC Green was the Overall Individual Service Rifle competitor back in 2014 and was also this year’s overall high competitor during the inaugural CMP Cup Matches fired in late June. It was then that he simply summarized his highly decorated career as a marksman, even earning Distinguished Air Rifle Badge #1 as a junior, saying, “It’s been a long learning journey, but it’s been a good one.”

Dropping only seven points over his entire 2017 National Match showing, SFC Green also fired a perfect 300 score as an individual in the Hearst Doubles team match, with 18 x-ring hits. 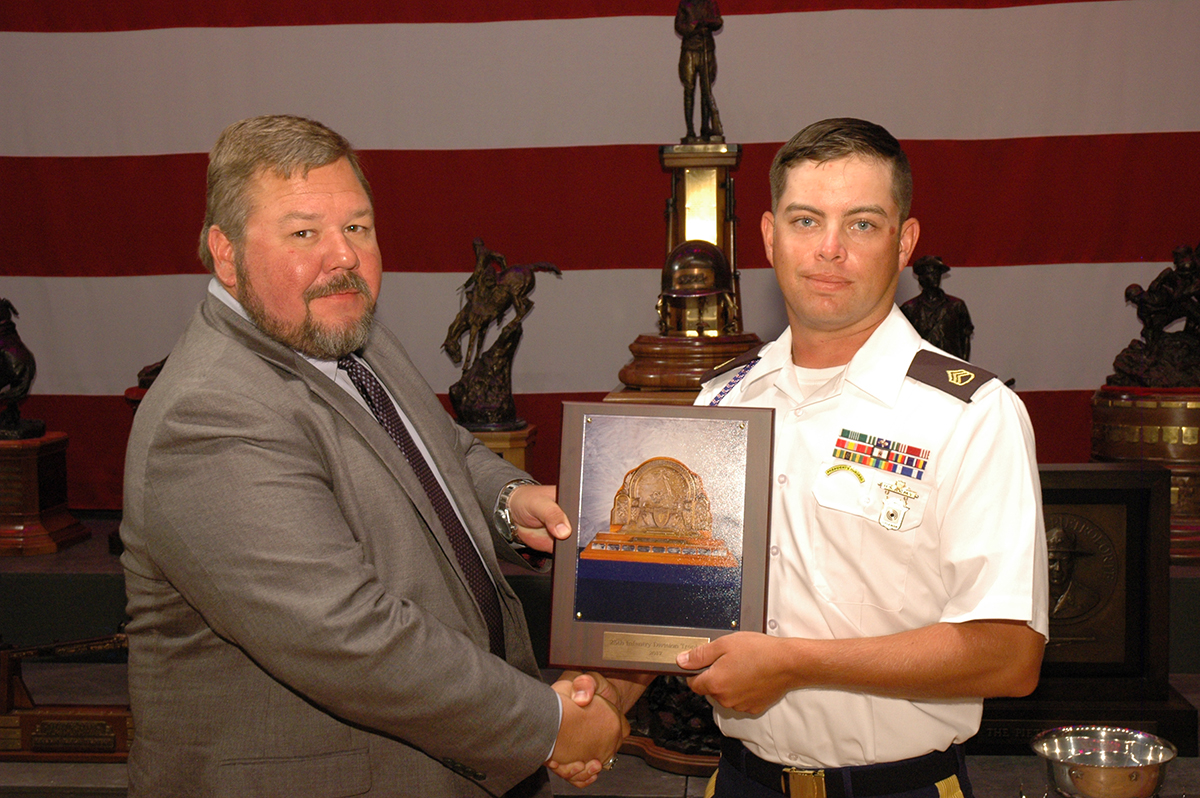 SSG David Bahten of the Army Marksmanship Unit also fired an incredible score of 499-21x for a new National Record.

SSG David Bahten, 28, also of the AMU, joined Green at the top of the pack of the NTI event – breaking the previous National Record and falling just short of the win by x-count with an outstanding score of 499-21x. SSG Bahten still etched his name in the record books for the 25th Infantry Division Trophy as the highest scoring Infantryman, Active, Reserve or National Guard competitor. 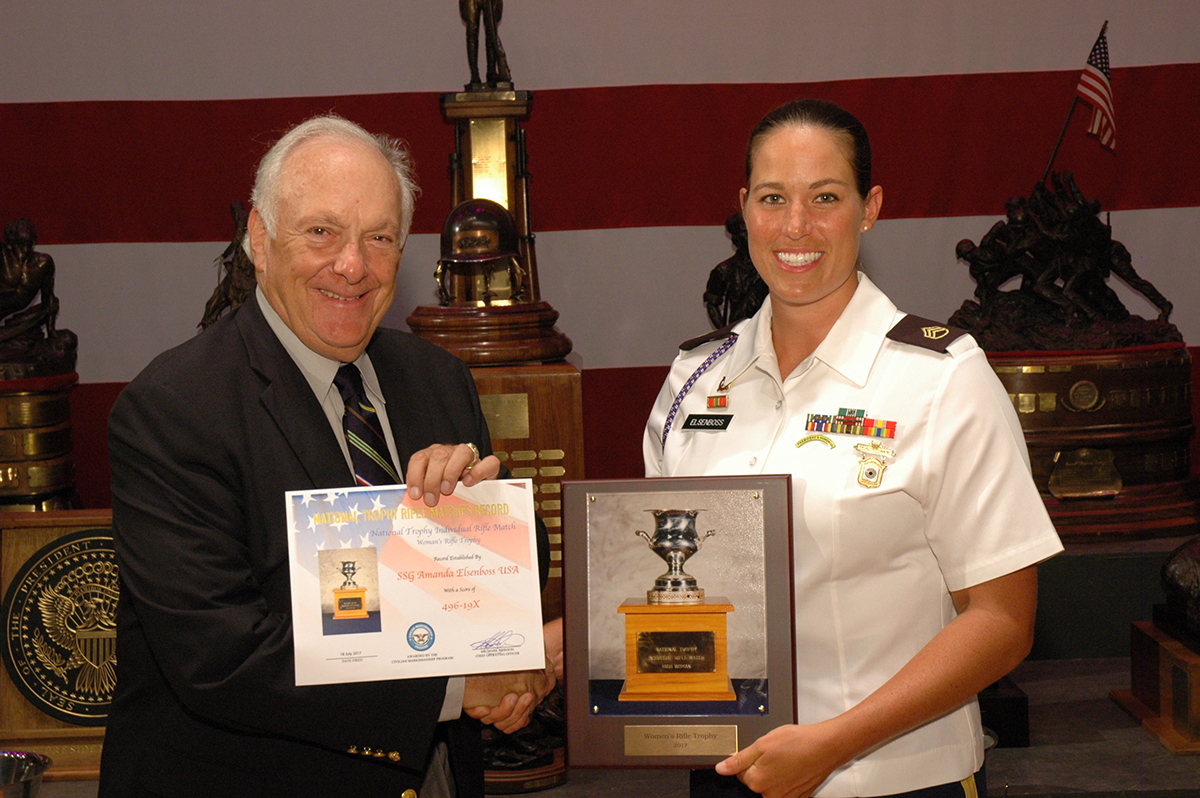 High Woman of the match, with a new National Record score of 496-19x, was SSG Amanda Elsenboss, 28, of the AMU, and earning the Nathan Hale Trophy as High Civilian was James Vaughn, 46, of Bloomington, IL, with a score of 495-16x. 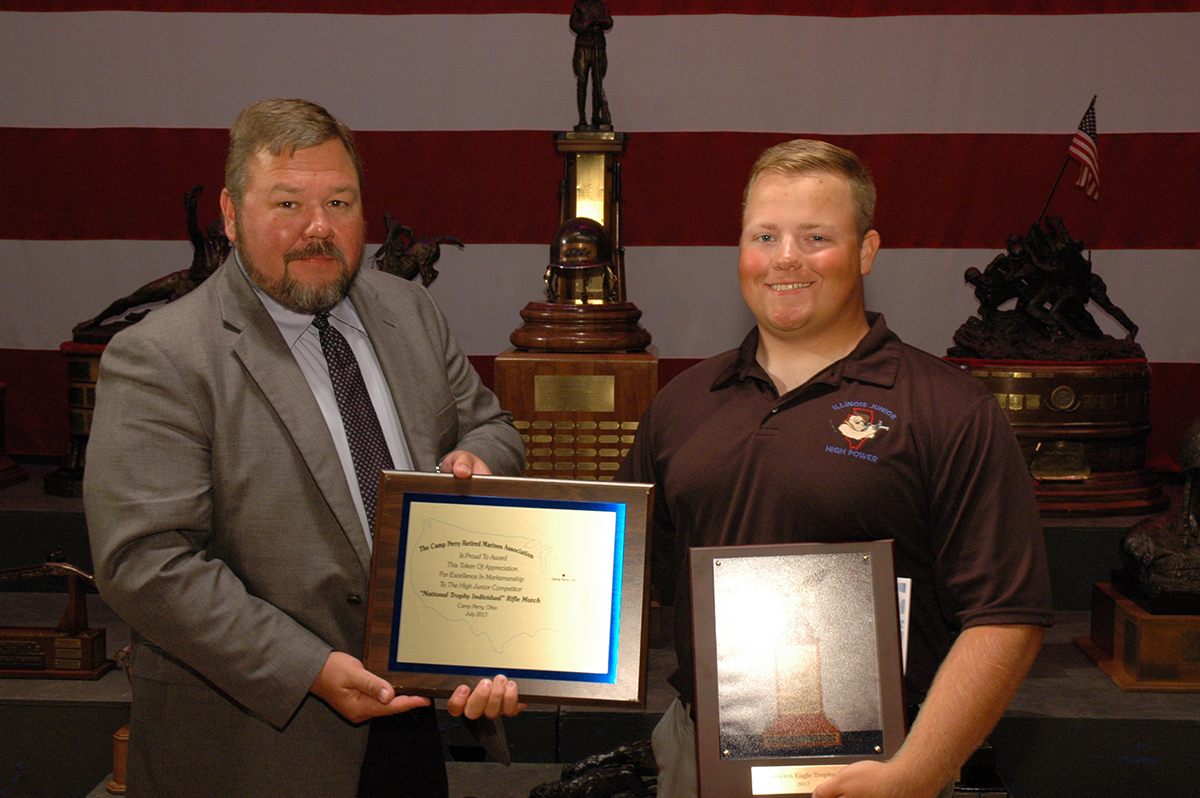 Liam McKenna set a new National Record in the NTI event as the High Junior competitor.

Only falling two points short but hoping to someday take home the trophy himself is Liam McKenna, 20, of Warrenville, IL, who also set a new National Record in the NTI match. McKenna was the High Junior of the competition, with a score of 494-21x. He also earned the title as the overall high junior service rifle competitor of the matches – setting an aggregate National Record of 1279-49x. 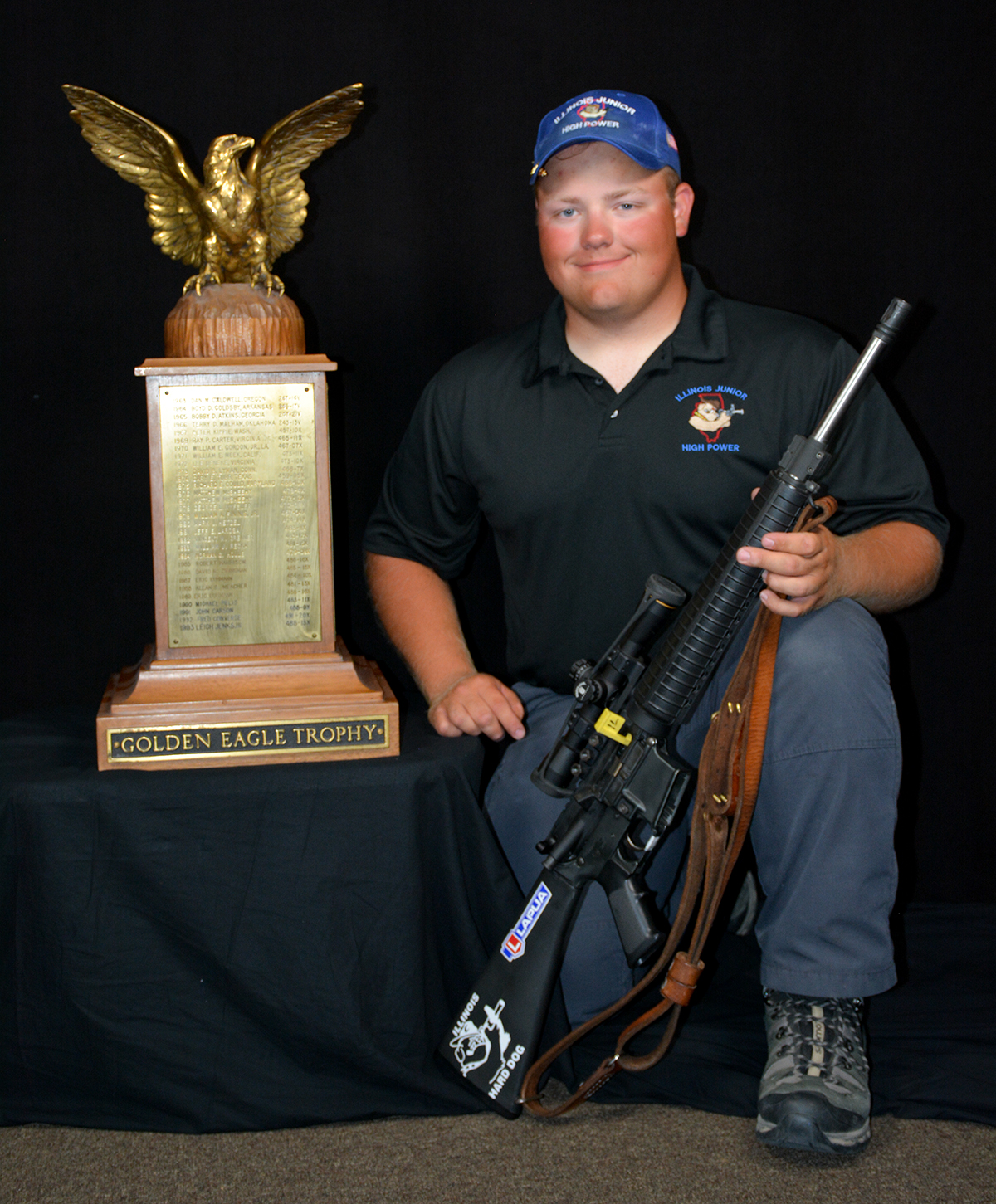 With his outstanding scores, McKenna was named the overall service rifle junior competitor of the National Matches.

“It’s Camp Perry – I knew there was going to be a lot more competition from around the country, and I knew I was going to be a contender but not for sure at the top,” McKenna said. “All you can do is shoot the best you can and hope to be at the top. It turned out okay this week.”

Justin Utley, 32, of Mineola, TX, was the winner of the 2017 President’s 100 Rifle Match with a score of 396-17x. The event served as his fourth time making the famous the President’s Shoot Off, previously placing as high as third place. 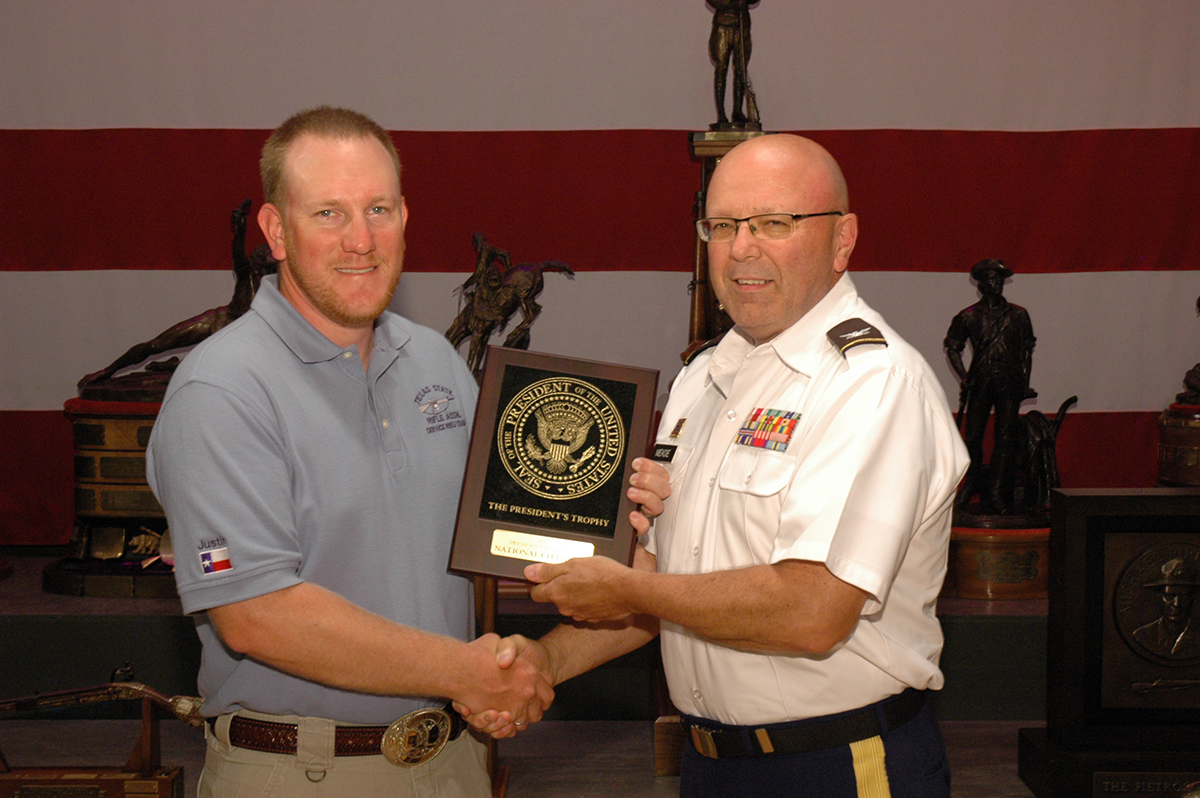 Justin Utley was the winner of the President’s 100 Match and also set a new record for the Pietroforte Trophy.

“I’ve been training pretty hard this year so I was really looking forward to it,” he said. “My first shot was a 9, and after that, I saw a few other shooters shoot 9’s. And after that, I didn’t drop any more points.”

Though the first shot made him nervous, he quickly corrected his wind call and treated every shot like a new one for the rest of the shoot off. Utley has been coming to the National Matches since 2000, with winning the President’s Match as a constant goal he kept in his mind. Now that he’s accomplished that feat, it’s time to move forward with his new list of achievements.

“I’ve got to keep trying and win the other ones,” he said with a laugh.

Utley was also the winner of the Pietroforte Trophy, reserved for the high-scoring civilian with the combined scores of the NTI and NTT matches. He fired a new National Record of 986-42x in the aggregate. 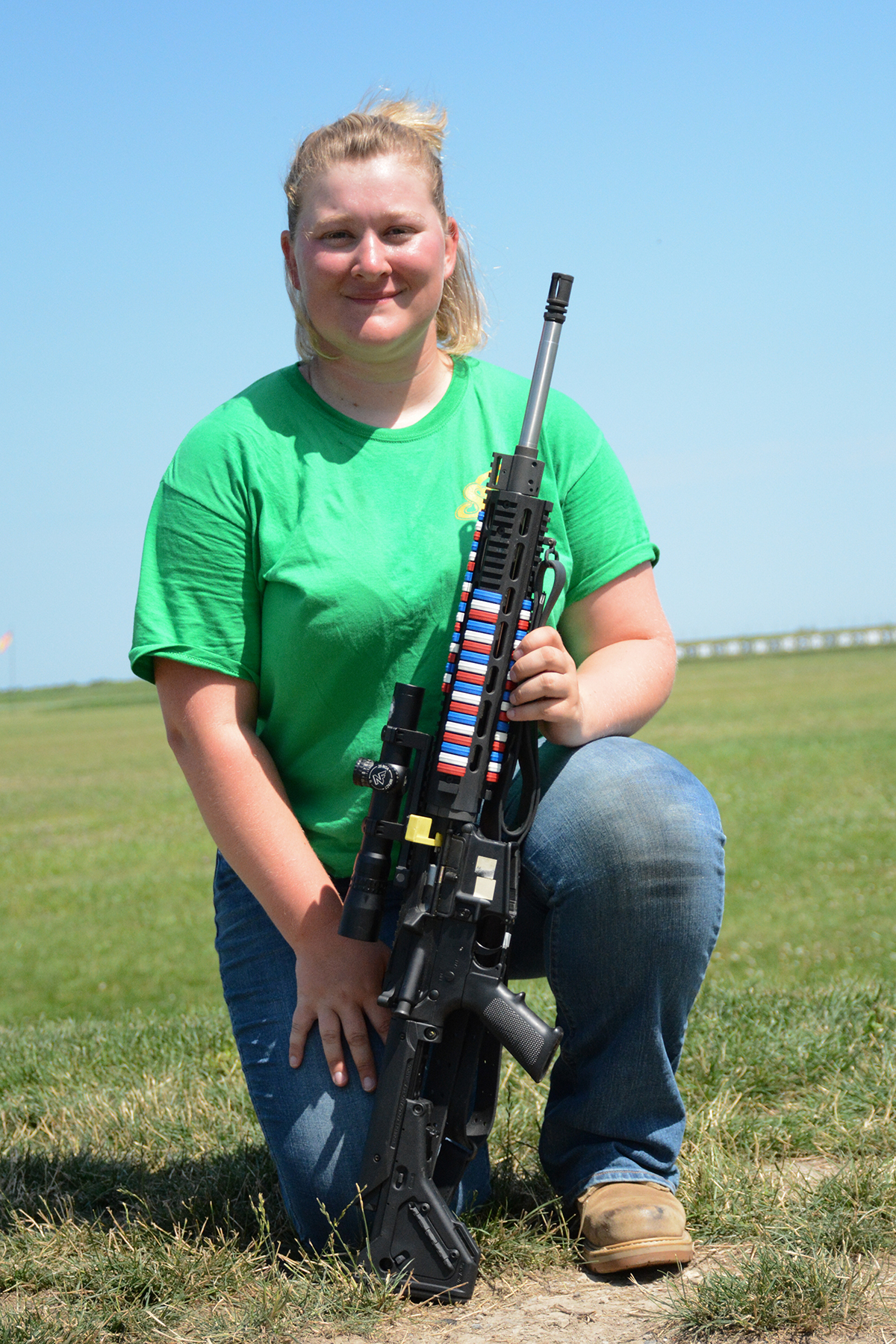 Like Elsenboss, setting a new National Record as High Woman of the President’s 100 Rifle Match with a score of 391-10x was Gabrielle Pitre, 20, of Louisville, KY. Pitre was also the High Junior of the event. 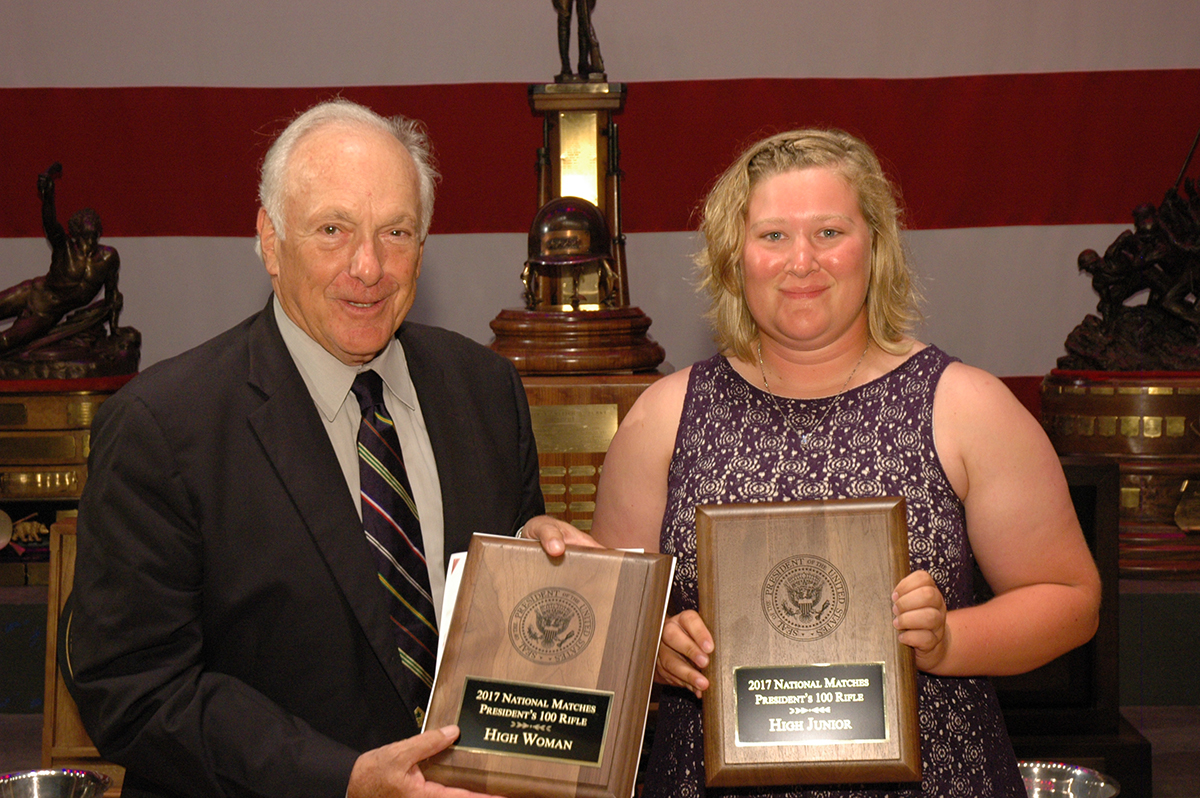 Along with High Woman, Pitre also earned the High Junior honor during the President’s 100.

Winning the inaugural Oliver Hazard Perry Match was SGT Ben Cleland, 24, of the AMU, with an outstanding score of 299-11x. The Course of Fire for the match includes sitting rapid, rapid prone and slow-fire prone. SGT Cleland’s only dropped point came in the sitting portion – finishing out the match with 100-5x and 100-4x in the prone phases.

A local to the Northwest Ohio area, growing up in Swanton, near Toledo, SGT Cleland is also a talented archer – having fired in the World Games for the event and securing a place on the U.S. Olympic Archery Team as a junior. SGT Cleland connected with the U.S. AMU service rifle team in 2015, fulfilling a childhood dream, and continues to be successful in his marksmanship endeavors.

In addition to the history-making scores set at the 2017 National Matches, over 45 talented marksmen received their Distinguished Rifleman’s Badge onstage at Camp Perry. Earning his first of 30 points towards becoming Distinguished was junior Tyler Lane, 18, of Wilton, NH, who fired a score of 389-11x to win the M16 Match that accompanied the Small Arms Firing School. Good luck on the search for your remaining points.

We look forward to experiencing the lasting excellence for years to come as the CMP returns to Camp Perry in 2018 for the National Matches. See you there!