Want a serious self/home defense gun? Get something else.

Oops. I gave away my review’s conclusion. But you should go ahead and read the rest of this, anyway.

When one of my friends sent me a link about the new American Gun Craft 12ga double-barrel pistol, I thought it looked like a lot of fun. A lot of people thought so, and the cool little pistol got a lot of attention.

For good reason. It looked well made, well designed, and easy to use.

And it is. Check it out: 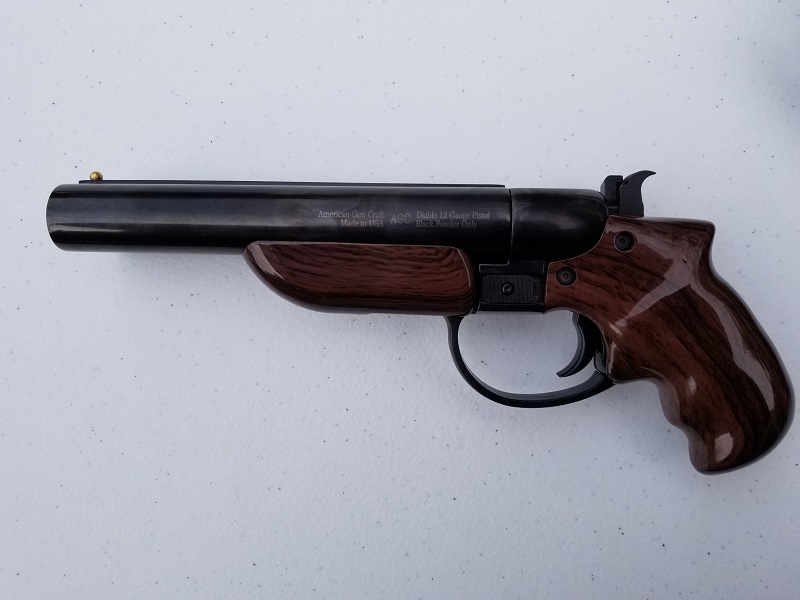 And this is what it looks like in the hand: 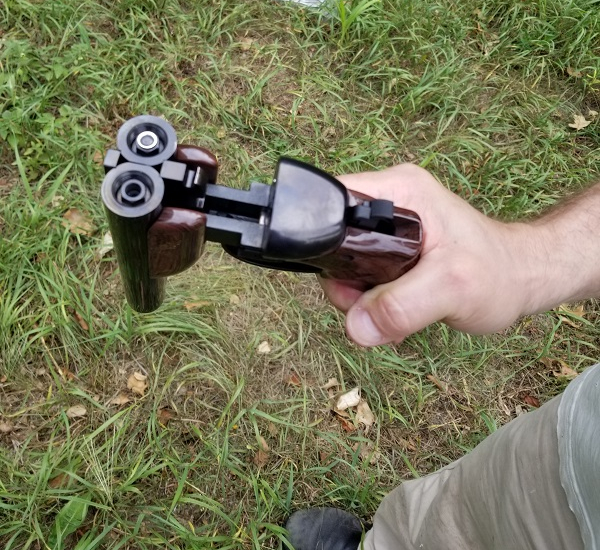 Seriously, this is a very high-quality gun. It’s very solidly made. The fit & finish is impressive. The bluing is rich, deep, and lovely. The rosewood handles fit perfectly, and are warm & comfortable in the hand. They’re polished so highly I at first thought that they were plastic. The trigger is smooth, crisp, and much better than I expected.

The design is simple, but there are little things about it that are quite nice. Such as when the gun is broken open, you can rest it on any flat surface with the barrels pointing up, and it is perfectly stable for loading. If you’re shooting by yourself, this would be very handy.

Since we didn’t know what to expect, we went with the manufacturer’s recommended load of black powder to start with.  That’s just 40gr of ffg, with a recommended half ounce of shot. But all we had to shoot out of the gun were 12ga balls (.69 cal ball, about 500gr — say 1.2 ounce). So we expected it to be mild shooting.

Well, according to this video, that’s probably just about 250fps, and maybe 70ft/lbs of energy. That’s about the same power as a low-performing .22 round out of a 6″ barrel. And it felt like it.

So, since the amount of lead we were shooting was more than double the recommended amount, we doubled the amount of black powder, to 80gr of ffg. Here’s that:

Well, again according to this video, that’s probably about 560fps, and maybe 340ft/lbs of energy. That’s about the same power as a typical 9mm round out of a 6″ barrel. And it felt like it. There was a bit of recoil out of the heavy pistol, but it wasn’t at all hard to manage.

Given how well the gun was made, and the mildness of the first shots, we didn’t have any qualms about increasing the amount of powder to double what was recommended. And that was a fun load to shoot. Others have pushed that boundary MUCH further, as you’ll see in either this video (referenced above) or this very long review. By using much bigger loads and different types of powder, it is possible to get up to energy levels in the range of a .357 or even .44mag out of a 6″ barrel.

So yes, it would be a pretty reliable self/home defense gun, in those terms. And we were shooting it at applicable ranges for that use, with adequate accuracy.

But consider several factors here. First, black powder is very hygroscopic: it sucks up moisture out of the air. That can be a problem with a muzzle-loading gun, and was the reason why Old West gunfighters would commonly shoot off their loads each morning and load their pistols fresh. Because wet powder can underperfom very badly. So you wouldn’t want to load the Diablo and then just set it aside for future use.

Black powder is also a slow-burning and very smoky powder. Shooting it indoors would fill the room with very acrid smoke, and may very well spew burning bits of powder out into the room, causing fires.

Lastly, while the Diablo is indeed easy to load and shoot for a black powder gun, that still takes a hell of a lot more time than it would take to load two additional cartridges into a derringer. And almost every common modern self/home defense gun offers more rounds for use than a derringer.

So we’re back to what I said at the start:

Want a serious self/home defense gun? Get something else.