I recently had a chance to shoot an AMT Lightning — it’s a clone of the Ruger Mark II .22lr pistol, but in stainless steel. Here it is: 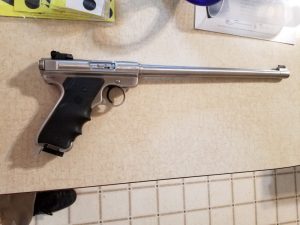 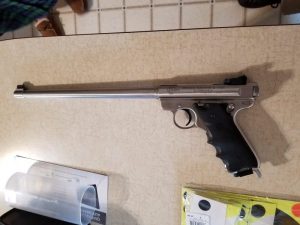 That’s a 10″ factory barrel, which was one of the options available when these guns were being produced back in the 80’s/90’s.

I remember these guns, or more accurately the lawsuit about them, from when they were being produced. Ruger didn’t take kindly to AMT using their designs (AMT also had a version of the 10/22), and took them to court over it. Ruger won the suit, as I recall (though there isn’t much readily available online to document that) and a few years later AMT went belly-up. Whether that was a result of the lawsuit or poor sales is still a subject of some debate.

Anyway, these guns are still kicking around, and every so often you can see one in a local gun shop or on your favorite auction site. My buddy picked one up, and we shot it last weekend.

In checking online, it seems that the quality control on the AMT guns varied widely — from year to year, specific model guns could range from great and reliable to a major nightmare. Evidently the biggest problem was with the hardness of the stainless steel used.

Only time will tell, but the one we had seemed fine. The fit & finish were OK, with no obvious problems. It shot just fine, and didn’t feel much different than any Mark II I’ve ever shot, though the trigger seemed a little rougher.  Without doing a head-to-head comparison, I can’t really say much more than that. Accuracy was as good as I could expect, limited more by my ability shooting it standing than by any issues with the gun. The long barrel certainly made it soft to shoot in terms of recoil.

So I wouldn’t call it a collector’s item, or comparable in quality to a real Ruger. But if you come across one at an attractive price, and it looks to be in decent shape, don’t be afraid to take a risk.