Prompted by my friends over at the Liberal Gun Club, this is another in an occasional series of revisiting some of my old articles which had been published elsewhere over the years, perhaps lightly edited or updated with my current thoughts on the topic discussed. This is an article I wrote for Guns.com, and it originally ran 1/23/2012.  Some additional observations at the end.

North American Arms makes a selection of small semi-auto pistols, but they are perhaps best known for their series of Mini-Revolvers in a variety of different .22 caliber cartridges. They currently offer models in .22 Short, .22 Long Rifle, .22 Magnum, and a .22 Cap and Ball. This review is specifically about the .22 LR model with a 1 1/8-inch barrel, but the information is generally applicable to the other models of Mini-Revolvers that NAA offer as well. 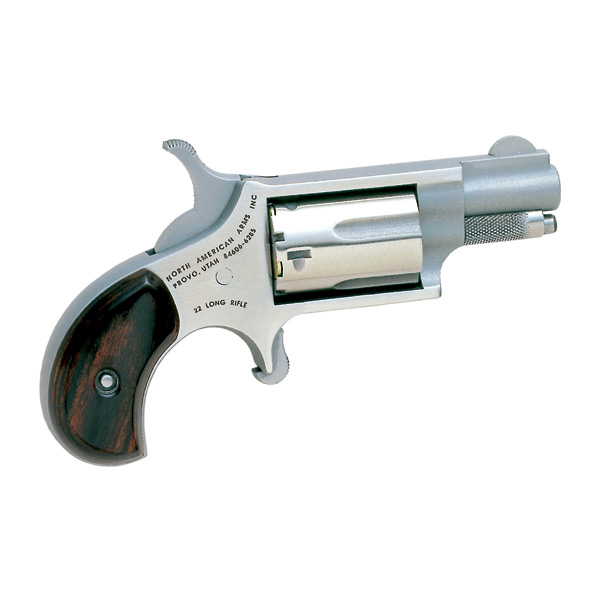 The NAA-22LR is very small, and would make an almost ideal ‘deep cover’ or ‘last ditch’ self-defense firearm. It isn’t quite as small as the .22 Short version, which has a shorter cylinder, and it doesn’t have quite the same power level as the .22 Magnum version either. It has a simple fixed-blade front sight that has been rounded to minimize snagging and it holds five rounds.

All the NAA revolvers I have seen or shot are very well made. They’re solid stainless steel construction, and use high-quality components for all other parts. The fit and finish is quite good, and there is nothing at all shoddy about them. The company also has a solid reputation for standing behind these guns if there is a problem.

The NAA-22LR is surprisingly easy to shoot. I have very large hands, and very small guns are usually a problem for me to shoot well. But most of the really small handguns I have shot are semi-automatics, which impose certain requirements on proper grip. The NAA Mini-Revolvers are completely different. First, they are Single Action only, meaning that you have to manually cock the hammer back before the gun will fire. Second, there is no trigger guard – something which may make novice shooters nervous. However, since the trigger does not extend until the hammer is drawn back, there really isn’t a safety issue with no trigger guard.

Further, the NAA Mini-Revolvers use an old trick of having the hammer rest on a ‘half-notch’ in what they call their “safety cylinder”. This position is between chambers in the cylinder, and ensures that the gun cannot fire when it is dropped. Again, you have to manually cock back the hammer in order to get the cylinder to rotate and then it’ll align a live round with the hammer.

One option available on most of the Mini-Revolvers is their “holster grip”, which is a snap-open grip extension that also serves as a belt holster by folding under the bottom of the gun. It is an ingenious design and makes it much easier to hold and fire the gun. 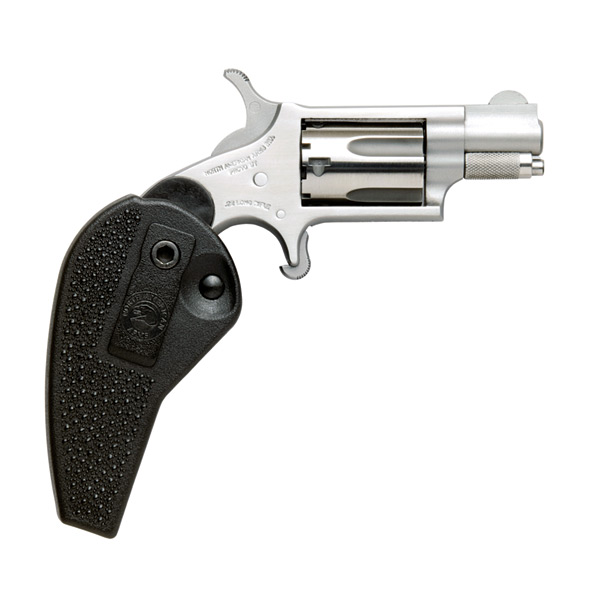 About the only problem with the gun is a function of its very small design: reloading. You have to completely remove the cylinder, manually remove spent cases, load new rounds into each chamber, and then remount the cylinder. This is not fast nor easy, and effectively turns the gun into a “five shot only” self-defense gun. But realistically, if you’ve gotten to the point where you are relying on a NAA Mini-revolver for self defense, I have a hard time imaging there would be much of an opportunity to reload the thing regardless.

Another point to consider with the NAA-22LR: ballistics. We did test this model as part of our BBTI .22 test sequence. Suffice it to say that the 1 1/8-inch barrel had the poorest performance of any gun we tested in terms of bullet velocity/power, which is to be expected, and is a trade-off for the very small size of these guns. If you want to check the data, use the 2″ barrel row for approximate results.

Bottom line, the NAA Mini-Revolvers serve a very specific purpose, and are well-suited to that purpose.

There’s a fair amount I’d like to add to this post, since NAA has expanded their selection of mini-revolvers considerably, and there are some intriguing new models.

But first I’d like to point out that they’ve added some really solid ballistics information to their site for each of the models. Seriously, they give excellent information about what performance you can expect with a variety of ammo, and as far as I can see the results are very realistic in comparison to our own data.  Just one ammo example for the model above:

That is extremely useful information, well organized and presented. Kudos to North American Arms for doing this! I’m seriously impressed.

As I noted, they’ve also added a number of new model variations to their offerings. Now you can get models with slightly oversized grips, with 2.5″,  4″, and 6″ barrels (in addition to the 1 1/8-inch barrel and 1 5/8-inch barrel models), with Old West styling, and a selection of different sight types & profiles. They even have a laser grip option available.

But perhaps even more excitedly, they now have both Swing-out and Break-top models which eliminate the problems with reloading: 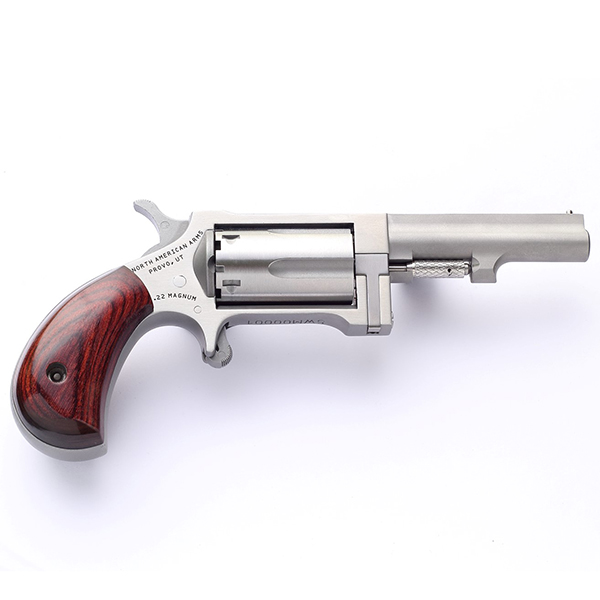 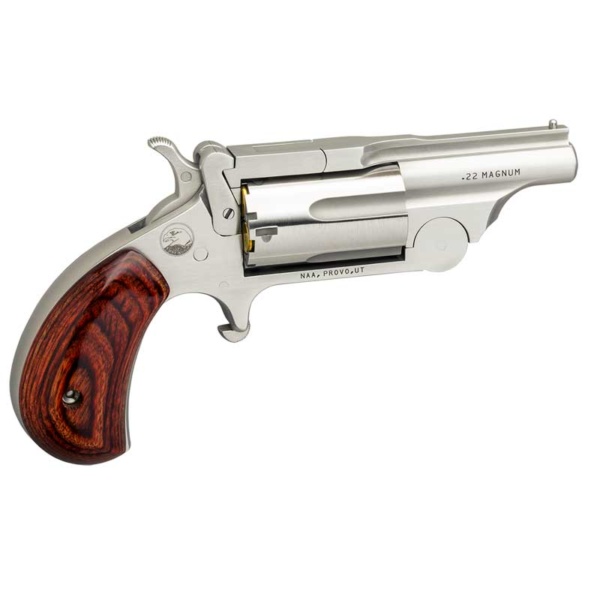 Cost for those models are unsurprisingly higher than the older & simpler models, but still fairly reasonable.

I think that all models have a conversion-cylinder option available, so you can shoot either .22lr or .22mag ammo. As I have noted previously, at the very low end there’s not much additional power of .22mag over .22lr, but having the ability to switch ammo can still be worthwhile. And certainly, when you start getting out to 4″ (+ the cylinder), there is a greater difference in power between the two cartridges, and I think that if you were to get one of the guns with the longer barrel it would make a whole lot of sense to have the ability to shoot both types of ammo.

I’ll close with this thought: think how much fun it would be to have one of these mini-revolvers in something like .25 or .32 acp configured to carry say three rounds. Or you could even go nuts with a .32 H&R or .327 mag …