Prompted by my friends over at the Liberal Gun Club, this is another in an occasional series of revisiting some of my old articles which had been published elsewhere over the years, perhaps lightly edited or updated with my current thoughts on the topic discussed. This is an article I wrote for Guns.com, and it originally ran 12/26/2011. Images used are from that original article. Some additional observations at the end.

I like pistol-caliber carbines (PCCs). I think that they are a very good solution to a number of problems. However, the toughest thing about a PCC is finding one you can shoot well. In addition to some cowboy action carbines, there are plenty of other options out there – Kel Tec Sub 2000, Kriss Vector, there’s even a few Hi-Points – but the Beretta CX4 Storm is one of the best I’ve shot.

Beretta has been around forever, and they have more than a little experience in making firearms for a very wide range of applications. They designed the CX4 (and the MX4 military version) to be lightweight yet reliable for personal defense and sporting purposes. For this use, it is ideal.

Right out of the box the CX4 Storm is fairly basic, but offers a huge range of personalization possibilities. It’s easy to adjust the overall length of pull, to accommodate both those who have shorter arms and for apes like me. It has a Picatinny rail on the top for optics, one on the side for whatever, and one on the foregrip, which can be extended out under the barrel. Additional rails can be added at several locations, and you can load this gun down with enough tacticool stuff to make a mall ninja drool.

Standard sights include a front post, which is adjustable with a provided tool, and a rear sight with two apertures – a smaller one for long range/accuracy and a larger one for quick target acquisition. Both sights fold down and out of the way if you want to put a different kind of optics on the top rail.

One very nice feature is that the gun is designed to be easily converted from right-hand to left-hand use. The magazine release, the safety, the ejection port are all reversible with minimal gunsmithing skills, and most buyers can probably do the change themselves without difficulty.

The gun is also very ergonomic – which makes it easy to shoot it well. First time I picked it up I put all eight rounds (I was shooting the .45 ACP model) into a ragged hole less than an inch across at 25 yards. This is one of the main reasons that I like PCCs – the increased stability and sight radius of a carbine, combined with minimal recoil, make them very easy for even a novice to shoot well. The CX4 Storm is light enough (under six pounds) to not be wearying, yet heavy enough to absorb the recoil of .45 ACP rounds without any problem whatsoever. Part of the ergonomic design is the balance of the carbine, which helps it to point naturally as well as allow moving easily with it.

As you would expect with a firearm made by Beretta, the quality is top notch. Fit and finish are excellent – there are no rough spots or small gaps, no problems with the magazine seating properly, no difficulty with the charging handle or safety that I experienced, though others have reported some problems getting the safety to engage/disengage in the past. The specs for the gun state that it has a hammer-forged and chrome-lined barrel for long life and easy cleaning. All in all, it feels solid and gives you confidence that it will last for many years.

At $915, the MSRP is higher than you’ll pay for many other good quality pistol-caliber carbines, but it is not outrageous and you know you are getting a firearm you can trust (or depend on the manufacturer to stand behind if you have any problem.) And new ones can be found for around $700, as well as good used ones for a significant discount.

Bottom line: the Beretta CX4 Storm is a fine gun, which does everything it is designed to do, and there’s a good reason why most owners love them. If you get a chance, give one a try in your favorite caliber.

Since I wrote that almost six years ago, I’ve gotten my own Cx4 in .45 … and then beefed it up to handle the additional power of the .45 Super cartridge. I’ve also added mag extensions, a Vortex Venom reflex sight, and an inexpensive 4 pistol mag storage pouch.  This is what it looks like now: 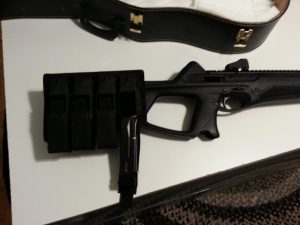 And yes, that’s a guitar case in the top of the image. With a little padding, the Cx4 fits perfectly, and surprises people.

If you haven’t guessed, I still really like it.