One thing about cats

One thing about cats

Cats have a bit of a reputation for standoffishness, especially compared with dogs. But if you find your feline friend is a little hard to bond with, maybe you're just not speaking their language.

Research shows that it's actually not so difficult. You just need to smile at them more.

Not smile in the human way, by baring your teeth, but the cat way: by narrowing your eyes and blinking slowly.

In a study published in 2020, scientists observed cat-human interactions, and were able to confirm that this act of blinking slowly makes cats – both familiar and unfamiliar animals – approach and be receptive to humans.

I tried it last night. The cat and I were on the couch, so I did it. I think it was too slowly, as I woke up cold and alone on the couch. I'd fallen asleep.

2 by papajim2jordan
Maybe you just need the right cat. 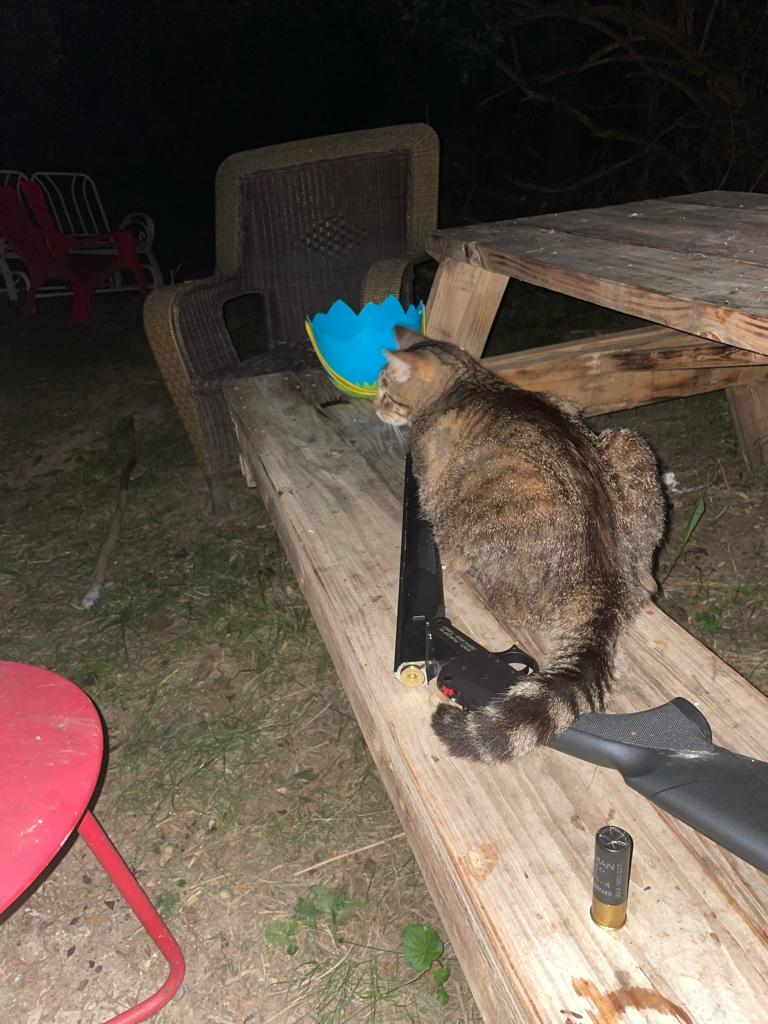 You just need the right cat. This guy loves my guns as much as I do. Likes sitting on them at least. At my old, rural property you needed some coyote control out by the fire pit.

4 by BearPaws
I was fond of cats from the time I was starting to talk well enough to be understood by more folks than just my parents.

I long considered myself a "cat person," preferring cats to dogs, even though I've enjoyed the company of dogs quite a bit.

A former girlfriend's father thought cats were mean creatures, perhaps because he never had good experiences with cats. I observed (to myself and to my girlfriend) that people who want to control others more prefer dogs because cats don't put up with the nonsense dogs will.

These days, I have two dogs and two cats. The Basset Hounds are Wilbur and Orville, because Bassets should be "Wrightly" named.

5 by highdesert
Once had a Siamese who wasn't a typical Siamese or even a typical cat, he was more like a dog. Even the two dogs we had played with him. Other that Monk it's just been dogs for me over the years.

Cats and cat people are a bit strange.

"Everyone is entitled to their own opinion, but not their own facts." - Daniel Patrick Moynihan

6 by SubRosa
As Mrs. Slocum said: "My pussy..."
Tradition is not the worship of ashes, but the preservation of fire. - Mahler

7 by YankeeTarheel
Had cats for about 40 years. Some were fun, some shy, some irritable, and one of our two is 3 to 5 of the most destructive feline on the planet--but he IS affectionate.
Still really a dog person--got one of those, too.
"Even if the bee could explain to the fly why pollen is better than shit, the fly could never understand."

"It is better to be violent, if there is violence in our hearts, than to put on the cloak of non-violence to cover impotence. There is hope for a violent man to become non-violent. There is no such hope for the impotent." -Gandhi
jc57
jc57

9 by jc57
We have five cats. Each has an entirely different personality.

The slow-blink is definitely a thing. It can change the whole dynamic about how a cat thinks about you.

10 by CDFingers
The robe I wear in the mornings has one side at lap height all fuzzed up from Cleo making muffins on it while I browse the innerwebz drinking coffee.

11 by tonguengroover
Had several cats. The best one was Sam. Sam I Am.
He was a retriever, the best of any dog.
When I went out into the desert behind my parents house to shoot some breakfast, mostly quail and some dove he would be on the bird as it hit the ground.
But then he wouldn't give it back. So first one was his. Then I was on my own.
A boy and his cat with a BB gun
Happiness is a worn gun. - Dan Baum

13 by SubRosa
This is Monkey.

We're just fortunate he doesn't have opposable thumbs.
Tradition is not the worship of ashes, but the preservation of fire. - Mahler

14 by tonguengroover
I do have some kitty's. However they will kill domestic kitty's which is one reason I don't currently have any. Plus wife is allergic. I've always let my kitty's run free and don't believe in keeping them in house prison.
Happiness is a worn gun. - Dan Baum

15 by wooglin
My cat, Maggie (aka Margaret) Duck, is currently chasing my cursor around on my screen. Making it hard to type.


A new record has been set by a pet in south-east London as the world's oldest living cat. Flossie, 26, of Orpington, was confirmed as the oldest cat by Guinness World Records, which said she had a human equivalent age of 120 years old. Owner Vicki Green described Flossie as "an amazing cat" who settled in after being rehomed by Cats Protection. Vicki said Flossie was deaf, had failing eyesight, but was still affectionate and playful.

"I knew from the start that Flossie was a special cat," Ms Green said. "But I didn't imagine I'd share my home with a Guinness World Records title holder. "She's so affectionate and playful, especially sweet when you remember how old she is."

Guinness World Records said Flossie had been living in a colony of cats near a Merseyside [Liverpool, England] hospital, when two workers took pity on them and each homed a cat.

Flossie and the worker, a woman, lived together for 10 years until she died, and Flossie was taken in by her sister, who had Flossie for 14 years until she too passed away, the organisation added. She was finally rehomed with Ms Green as it said she had experience in caring for older cats.

https://www.bbc.com/news/uk-england-london-63728931
"Everyone is entitled to their own opinion, but not their own facts." - Daniel Patrick Moynihan

19 by CDFingers
A stripey dude. Or dudette, one.

Daddy’s girl! LoL. Don’t know what to say, females are just drawn to me, the furry ones! LoL.

21 by CDFingers
I have a stripey dude who lives outside and only comes in to eat. We call him Bob. It's frosted one night and promises to get colder here in a couple days. I'll see what he wants.

CDFingers wrote: Thu Nov 24, 2022 12:39 pm I have a stripey dude who lives outside and only comes in to eat. We call him Bob. It's frosted one night and promises to get colder here in a couple days. I'll see what he wants.

They do make up their own minds. I have a few outdoor ones that come to my garage through a small cat door. I feed them there and at least one has probably stayed in there during the recent cold spell. I doubt he wants to be an indoor cat, been feeding a few of them for many years and they don’t seem inclined for a closer relationship. The above definitely did, she made an effort and when she got used to visiting inside, she found the bedroom with a comfy bed. Put a food bowl for her on the bedroom floor and one day she decided to not ask to go out. It was pretty clear she made a decision. LoL.

23 by Eris
Cats definitely like the slow blink. They enjoy eye contact in general, but don't overdo it. If the cat decides to look away, don't try and force them to look back. The key with cats is let them know you are there for them but that you are going to let them initiate interaction most of the time. As was mentioned above they don't respond well to attempts to control them.

I have 2 cats right now and have had another 20 or so over the course of my life. I like to say that my purpose in life to make cats happy.
102+ recreational uses of firearms
1 defensive use
0 people injured
0 people killed

24 by YankeeTarheel
My wife used to say that cats only think about 3 things: Food, sex, and nothing, and if you neuter them that leaves food.
"Even if the bee could explain to the fly why pollen is better than shit, the fly could never understand."

25 by Rayj
We just adopted by a feral Siamese cat…most expensive adoption EVER!! Insulated the shed, vet, straw in shed, vet, heater, more straw, vet, good food…guess he is going to stay a while

.
"But who prays for satan? Who in eighteen hundred years has had the common humanity to pray for the sinner that needed it most?"
-Mark Twain

Users browsing this forum: No registered users and 4 guests

Re: "California Has More Than 100 Gun Laws. Why Do

Re: "California Has More Than 100 Gun Laws. Why Do