1 by CDFingers
One of the first comments on reddit is "Australia for scale." A tremendous explosion.

2 by highdesert
A horrendous eruption that set off tsunami alerts.

A tsunami advisory was issued for Hawaii and the U.S. Pacific Coast including California, Oregon, Washington and Alaska early Saturday morning after an undersea volcano erupted near the Pacific island nation of Tonga.

No major tsunami was expected, but the Pacific Tsunami Warning Center said waves and fluctuations in sea level could start in Alaska around 6:15 a.m. local time. The California Governor's Office of Emergency Services said waves could arrive in some coastal areas around 7 a.m. PST with a peak of about 1 to 2 feet. Waves could hit the San Francisco area around 8 a.m., according to the tsunami warning center. People are being advised to avoid beaches, harbors and marinas.

The volcano, named Hunga Tonga Hunga Ha’apai, sent ash, gas and steam rising like a mushroom cloud over the water. The eruption and a shockwave could be seen on satellite.

There were no immediate reports of injuries.

https://weather.com/news/news/2022-01-1 ... o-eruption
"Everyone is entitled to their own opinion, but not their own facts." - Daniel Patrick Moynihan

3 by tonguengroover
Amazing power.
What you do speaks so loudly that I cannot hear what you say.
- Emerson


https://www.youtube.com/watch?v=LDji8xPPNGE
"Everyone is entitled to their own opinion, but not their own facts." - Daniel Patrick Moynihan

5 by CDFingers
I want to spread the announcer's delicious Aussie accent on like a half dozen corn muffins to have along with a pint of Sierra Nevada Atomic Torpedo Juicy West Coast DIPA. Scrumptious, with a nearly edible fragrance.

A double IPA and corn muffins is an interesting combination, I'm game.
"Everyone is entitled to their own opinion, but not their own facts." - Daniel Patrick Moynihan

A double IPA and corn muffins is an interesting combination, I'm game.

Just ask the yank and the Canuck to say house. That will settle the matter. Now I have know people that couldn’t tell the difference between a Georgia and a Texas accent. I had a boos that was from NYC and had an accent from the Bronx which she said was different than one from Brooklyn. I couldn’t tell the difference.
Facts do not cease to exist because they are ignored.-Huxley
"We can have democracy in this country, or we can have great wealth concentrated in the hands of a few, but we can't have both." ~ Louis Brandeis,

8 by DiamondDawg
Amazing! That's what ~200 million tons of TNT looks like, far more powerful than any nuclear device in existence. The shockwave was like a collision event, and the Tsunami warnings were wild!
wings

9 by wings
Where are you seeing that yield estimate, Dawg? I believe it, I just want sources.

Years ago, the Russians tested one - the Tsar Bomba - at 50 million tons of TNT. Half of its potential yield. They dialed it down to reduce the fallout - but at full strength, it would still take two of them to get this big.

10 by Bisbee
https://mobile.twitter.com/jordyn_rudd
My google-fu is strong for things that matter.
"It is better to be violent, if there is violence in our hearts, than to put on the cloak of non-violence to cover impotence. There is hope for a violent man to become non-violent. There is no such hope for the impotent." -Gandhi

11 by CDFingers
Reminds me of my college days. Was this great burrito shop, Hey, Juan's, had four grades of salsa. Mild, Medium, Hot, and Death Paste.

I only did Death Paste once but survived. Tsar Bomba ain't got shit over that shit, as it were.

12 by highdesert
It was an underwater volcanic eruption too at a neighboring island to Tonga.
"Everyone is entitled to their own opinion, but not their own facts." - Daniel Patrick Moynihan

Boats bashed into a quiet harbor in Southern California, a remote island was battered in Japan by four-foot waves and two women were swept to their deaths on a beach in Peru — some 6,000 miles from an undersea volcanic eruption so powerful that the tsunami it set off churned ocean waters halfway across the globe.

But on Sunday, as reports of the volcano’s impact trickled in from far-flung countries, there was little word from Tonga, the island nation just 40 miles from the site of the extraordinary explosion. As concerns grew, the nation of about 100,000 remained largely cut off from the rest of world, its undersea internet cables knocked out of commission by the volcano.

“Shops along the coast have been damaged and a significant cleanup will be needed,” Jacinda Ardern, the prime minister of New Zealand, which has close ties with Tonga, said Sunday at a news conference.

The tsunami, she said, dealt a powerful blow to the capital of the archipelago, “with boats and large boulders washed ashore.”

In Tonga on Sunday, many residents lost not only communication ties but power. Up to 80,000 people there could be affected, the International Federation of Red Cross and Red Crescent Societies told the BBC.

“The ash cloud has, as you can imagine, caused contamination,” said Ms. Ardern, the New Zealand prime minister. “That’s on top of already a challenging environment, in terms of water supply.”

New Zealand and other nations in the region pledged to give Tonga aid to recover. So did the United States. But with heavy concentrations of airborne ash making flights impossible, it was difficult even to know what was needed.

Ms. Ardern said flights over Tonga were planned for Monday or Tuesday, depending on ash conditions. New Zealand’s navy was also preparing a backup plan, should the ash remain heavy, she said.

In a post on Twitter, Antony J. Blinken, the American secretary of state, offered his condolences: “Deeply concerned for the people of Tonga as they recover from the aftermath of a volcanic eruption and tsunami. The United States stands prepared to provide support to our Pacific neighbors.”

Tonga has experienced a succession of natural disasters in recent years. In 2018, more than 170 homes were destroyed and two people killed by Cyclone Gita, a Category 5 tropical storm. In 2020, Cyclone Harold caused about $111 million in damage, including extensive flooding.

The country has reported just one case of the coronavirus, but it has struggled economically during the pandemic. It closed its borders in March 2020, effectively cutting off tourism, which had previously made up about 12 percent of the country’s GDP.

And it may not be done with Hunga-Tonga-Hunga-Ha’apai.

“We stand ready to support the government and the people of Tonga,” a spokesperson for the United Nations in the Pacific said in a post on Twitter. “Unfortunately this is not over, and more eruptions and consequent tsunamis may follow.”

Like a lot of islands Tonga depends on rain for their water, which may have been contaminated by the ash.
"Everyone is entitled to their own opinion, but not their own facts." - Daniel Patrick Moynihan 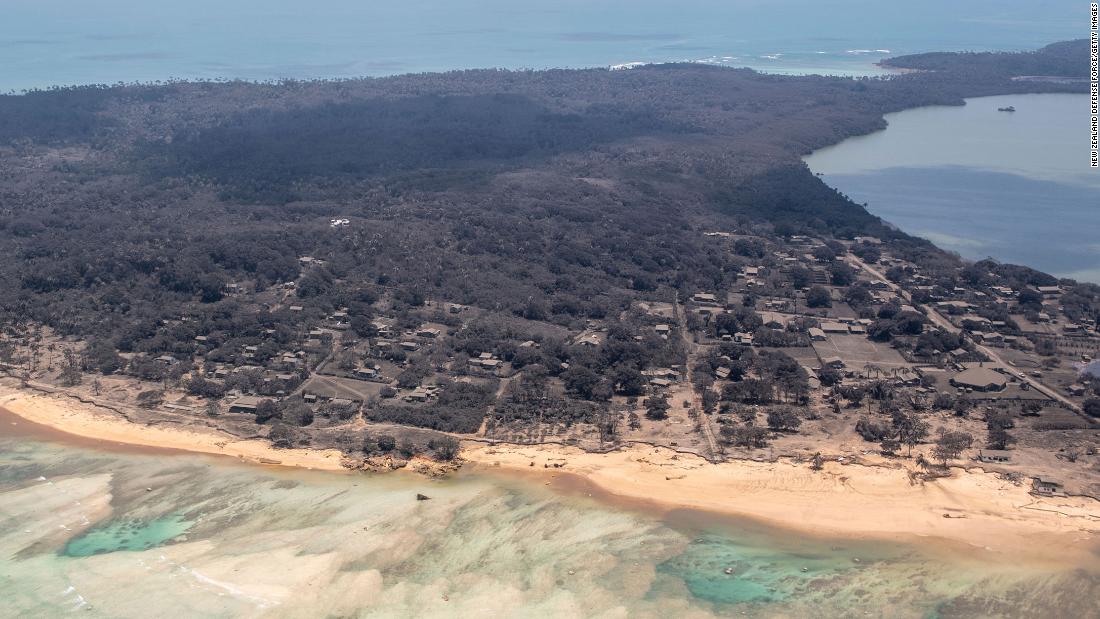 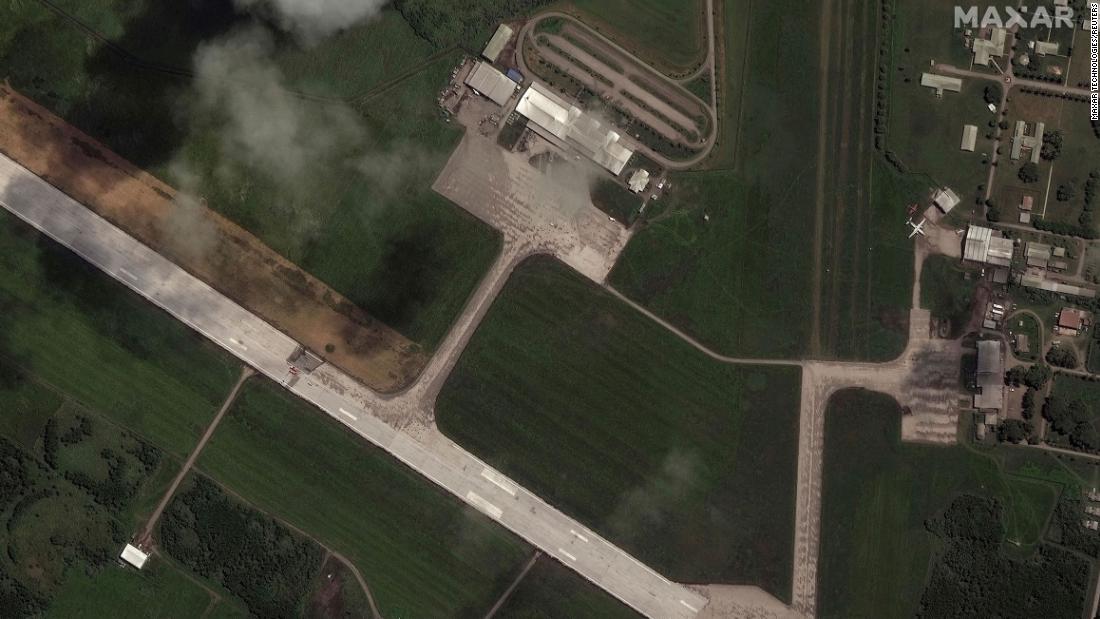 The main runway of Tonga's Fua'amotu International Airport is partially blocked due to volcanic ash.

The delivery of humanitarian aid to the country has been hampered by ashfall covering the runway of the capital's airport, according to officials from several donor countries.

New Zealand will deploy two Royal Navy ships to its fellow Pacific Island nation on Tuesday, the country's minister of defense, Peeni Henare, said in a statement, adding they would take three days to reach Tonga.
The two ships -- including HMNZS Wellington and HMNZS Aotearoa -- will carry a Seasprite helicopter, as well as humanitarian and disaster relief supplies, Peeni said.

"Water is among the highest priorities for Tonga at this stage and HMNZS Aotearoa can carry 250,000 liters, and produce 70,000 liters per day through a desalination plant," he added.

I assume Australia, the US and Japan area also sending ships with supplies.
"Everyone is entitled to their own opinion, but not their own facts." - Daniel Patrick Moynihan

Good gravy. What a mess. We need a virgin to sacrifice. I wonder if Jared is available? >groan<

.
If I had a gun for every ace I've drawn
I could arm a town the size of Zhytomyr
15 posts
Post Reply

Re: Background checks
The media pushed by the anti-gun lobby is beating
highdesert, Sun May 29, 2022 6:11 am

Re: Mass shooting forestalled
From above link.