1 by FrontSight
Do you remember what they were?

First I shot...
I was 8 years old and I was camping with my grandfather. Another camper somewhat close by brought out a Ruger 10/22 and said, let’s teach the kid to shoot (actually I was already proficient with BB/Pellet gun). I had a ball with that rifle. Then another guy walks over with a Marlin 39, and that was even more fun than the 10/22.

Finally grandpa says “Oh hell, might as well let him try a real rifle” and brings out his Model 94 in .30-30. It kicked the crap out of me, my ears were ringing, my shoulder hurt. But I blew the crap out of that pop can, and I wanted more.

First I bought...
I was 18 years old and I got the opportunity to buy any S&W for distributor cost. I think I paid $189 for a 6" S&W Model 19-6 with TT, TH, RR, WO. It was a wonderful revolver, wish I still had it.
“I think there’s a right-wing conspiracy to promote the idea of a left-wing conspiracy”

4 by Hiker
1st gun shot: 410 shotgun. Age 8. It knocked me back a step. I looked at my dad and asked to shoot it again. I've been hooked ever since.

1st bought: age 21? A 25 auto. Don't remember what kind. Sold it in a yard sale a year or two later.
All religions united with government are more or less inimical to liberty. All, separated from government, are compatible with liberty.-Henry Clay
Both oligarch and tyrant mistrust the people, and therefore deprive them of their arms.—Aristotle

First gun I bought was a Colt SAA in 45 Colt. Traded it off down the road, still have the Savage.

SR
A real woman could stop you from drinking.

7 by YankeeTarheel
First rifle I shot was a .22 single shot bolt action when I was, I guess, 8, at the most progressive/socialist summer camp in the Catskills. Loved it.
First gun I bought was either my Beretta Cx4 Storm in 9mm or my H-K VP-9. My records show it was probably the VP-9, 2 days before the Cx4. I just checked.
"The upper class: keeps all of the money, pays none of the taxes. The middle class: pays all of the taxes, does all of the work. The poor are there...just to scare the shit out of the middle class."--George Carlin
BearPaws

8 by BearPaws
First one I shot (aside from a BB gun a friend had) was probably a .22LR, bolt-action Mossberg. I might have fired that one before I started ROTC in high school, where we actually had some safety training (my idiot father bought me that Mossberg rifle but did NOTHING about teaching me safety stuff, and never took me to shoot with it...). ROTC unit had .22LR pistols (semi-auto, Ruger, perhaps?) and .22LR rifles (it's been over forty years, don't remember make/model). I got to shoot an M-16 at summer camp ('76, I think), and "familiarization shots" with a 1911 and an M60.

First one I bought for myself? CZ P10F, because it fits my (XXL--hence the screen name) hands.
Eventually I'll figure out this signature thing and decide what I want to put here.

9 by Elmo
Starting about age 8, my father taught me the basics of rifle shooting he had learned in the WWII-era Army with a single shot .22lr bolt gun. I don't know the make, and don't know what became of it.

First I bought for myself were two Remington 870 shotguns, a 12g and a 20g (thinking that would be preferred by my wife and daughters) about 14 years ago, when I was in my 50s.
"To initiate a war of aggression...is the supreme international crime" - Nuremberg prosecutor Robert Jackson, 1946

10 by Oldschool
Not sure what came first, but it was a 22LR rifle either bolt action at Boy Scout camp or one at a friends farm. They had tube fed guns, both semi-automatic and pump.

I got a Ruger Mk II 10" target pistol from my parents at about 14, so that was my first gun, but first I purchased was a S&W 28 used police trade in .357 4" maybe a year later.
Old School
The best upgrade for you firearm is always instruction and practice.

11 by FlyGuy
First shot was with Grandad age 8. "Boys" trip to his home in the back hills of West Virginia, Booger Hole to be exact.
Spring Field Model 65. I inherited it and still have it today.

First Purchase was Ruger Vaquero 45 LC. I Had a fascination with western theme at the time. I went all out as seen...

12 by FrontSight
This photo shows the .30-30 rifle my grandfather brought out that day. First experience shooting a centerfire rifle; I was hooked.

13 by wooglin
Standard summer camp bolt-action 22 was the first firearm I shot. First one I bought was a Browning B-92 in 44 mag. Didn't keep it for more than a few months before trading up for a Marlin 444 though. I miss the Marlin.

14 by CDFingers
The first handgun I bought was a Ruger Vaquero Bisley model in .357. Sold it because I did not like the Bisley grip or hammer. No regrets. The Vaquero I have now is a plow handle 4 5/8 in .45LC and is exactly perfect.

When I had an interest in heavy magnum revolvers, I fell in love with Ruger's Bisley grip. IME it absorbed heavy recoil better than anything out there; especially the Freedom Arms which I found downright painful.

But unless I'm shooting heavy magnums, I prefer the old school plow handle too. These days I have no interest in heavy magnums, and the only magnum I own is a .357 not so much or the cartridge, but because I like the revolver. My .45 Colt is straight up old school...which is what I love about it.
“I think there’s a right-wing conspiracy to promote the idea of a left-wing conspiracy”

16 by CDFingers
Once I learned to roll the plow handle, things were cool. But back to that Bisley, I hated the hammer, too. Kept slipping out from under my thumb.

17 by highdesert
I remember shooting a 22 rifle and a Ruger Mark I 22 pistol, the one that looked like a Luger P08. Can't remember which I shot first, buddies my age just had them in their bedrooms or closets and we had a large open space area at the end of our street for shooting. No one ever got shot even though we were teenagers and no one called the police saying they heard gun shots, it was a different world. First gun I bought was a used Ruger Standard Mark I. I've always been partial to 22 pistols.
Last edited by highdesert on Thu Oct 21, 2021 7:19 pm, edited 1 time in total.
"Everyone is entitled to their own opinion, but not their own facts." - Daniel Patrick Moynihan

First firearm I bought with my own hard earned cash was a Winchester 1300 speed pump that I still use to this day. (Has new furniture & I lost all the win-chokes except IC) 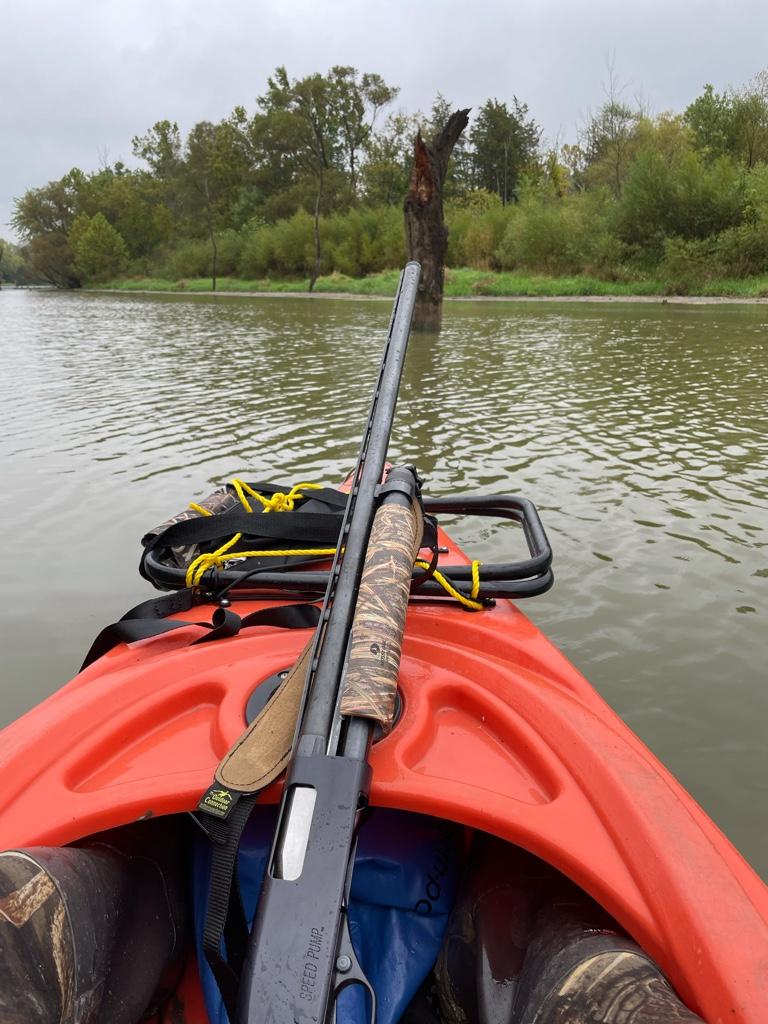 19 by QuoVadis
Probably a 22 at about age 7. And then an inexpensive 20 gauge over under as an adult.

20 by Crow
First rifle I shot was my Grandpa's Winchester Model 70 .22lr when I was about 8 years old. The pic I included is of me with that rifle hunting with my dad when I was probably 12. Central California back before all the vineyards.
I inherited most of my guns from my dad and grandfather, but the first one I actually bought was a Ruger Vaquero Sherrif's model in .357 magnum. I didn't like it much and sold it eventually. My hands were too big for the grip, unfortunately.
Crow
Minute Of Average

21 by FrontSight
I suspect that's a Winchester model 72, not a model 70. The model 70 is a Mauser action centerfire rifle with a staggered box magazine. The rifle in the photo is tube fed, so I'm thinking its probably a model 72... Still a very cool rifle, and a great story.
“I think there’s a right-wing conspiracy to promote the idea of a left-wing conspiracy”

Crow wrote: Thu Oct 21, 2021 11:18 pm First rifle I shot was my Grandpa's Winchester Model 70 .22lr when I was about 8 years old. The pic I included is of me with that rifle hunting with my dad when I was probably 12. Central California back before all the vineyards.
I inherited most of my guns from my dad and grandfather, but the first one I actually bought was a Ruger Vaquero Sherrif's model in .357 magnum. I didn't like it much and sold it eventually. My hands were too big for the grip, unfortunately.
Crow

From the looks of it your dad was a cross draw person. Is that a 1911? And looks like something else on his right side, Cool pc.
Masses are always breeding grounds of psychic epidemics.
~ Carl Jung

FrontSight wrote: Fri Oct 22, 2021 1:34 pm I suspect that's a Winchester model 72, not a model 70. The model 70 is a Mauser action centerfire rifle with a staggered box magazine. The rifle in the photo is tube fed, so I'm thinking its probably a model 72... Still a very cool rifle, and a great story.

Ah yes of course. My bad. Model 72. My son hunts rabbits with it these days, and I accompany him with a 72a that I picked up a few years ago.

tonguengroover wrote: From the looks of it your dad was a cross draw person. Is that a 1911? And looks like something else on his right side, Cool pc.

I think it was actually a S&W .357 magnum that he used to plink ground squirrels with at significant distances... he was a great shot. Unfortunately he has a degenerative disease in his hands that won't let him grip a pistol anymore.
He always wore his handguns crossdraw for some reason. I think the item on his right side is an Uncle Mike's gear pouch, probably full of bullets.
Crow
Minute Of Average
belus

First gun I bought was the day before my 13th birthday, a 20ga single shot H&R Topper model 58. $50 from a family friend.

When living with my parents I was only allowed to have shotguns because their lethal range didn't extend further than you could see.
Phoenix Area Pink Pistols Member since 2008.
Living and competing north of Tucson, AZ.
35 posts
Post Reply