1 by BlogBot
Scott Rockett, 18, of Cary, North Carolina, was recently selected by members of the Civilian Marksmanship Program (CMP) scholarship committee to carry the distinction of Top Recipient of the 2021 Carolyn Hines Memorial Scholarship. 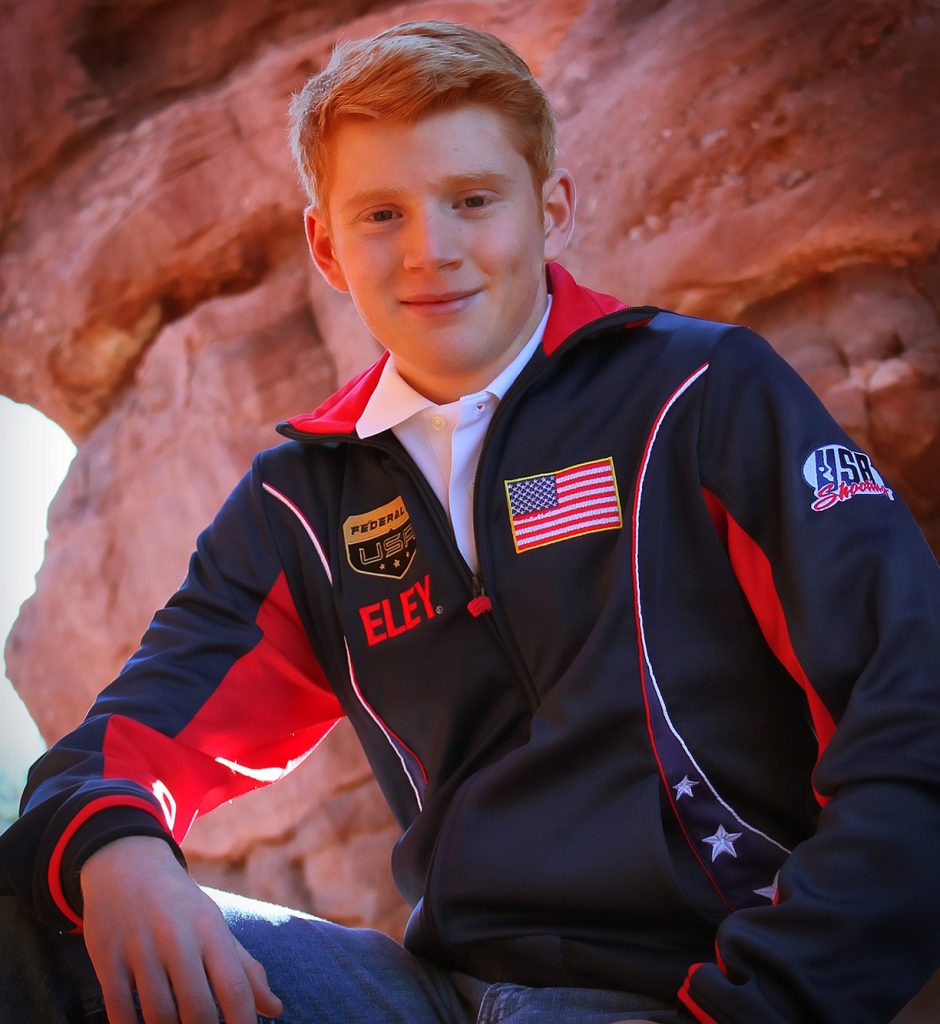 Scott Rockett was chosen as the Top Recipient of the 2021 Carolyn Hines Memorial Scholarship. The CMP’s Scholarship Program was restructured in 2020 after the passing of longtime Scholarship Committee Board member and passionate supporter of student-athletes, Dr. Carolyn Hines, and took on a new designation as the Carolyn Hines Memorial Scholarship. Over 150 scholarships were awarded in 2021, thanks to the generosity of both the CMP and the Garand Collectors Association – totaling $187,000.  Though most individuals chosen received $1,000 each, the elected Top 15 earned $3,000 for their accomplishments, while Scott, as Top Recipient, received $5,000. “Carolyn Hines devoted tremendous effort to set conditions that would allow young people to succeed,” said LTG Joe Inge, CMP Board member and current chair of the Scholarship Committee. “She would be so proud of Scott Rockett – proud of his tremendous academic record, proud of his wonderful record of community service and certainly proud of his achievements as a rifle team competitor.” 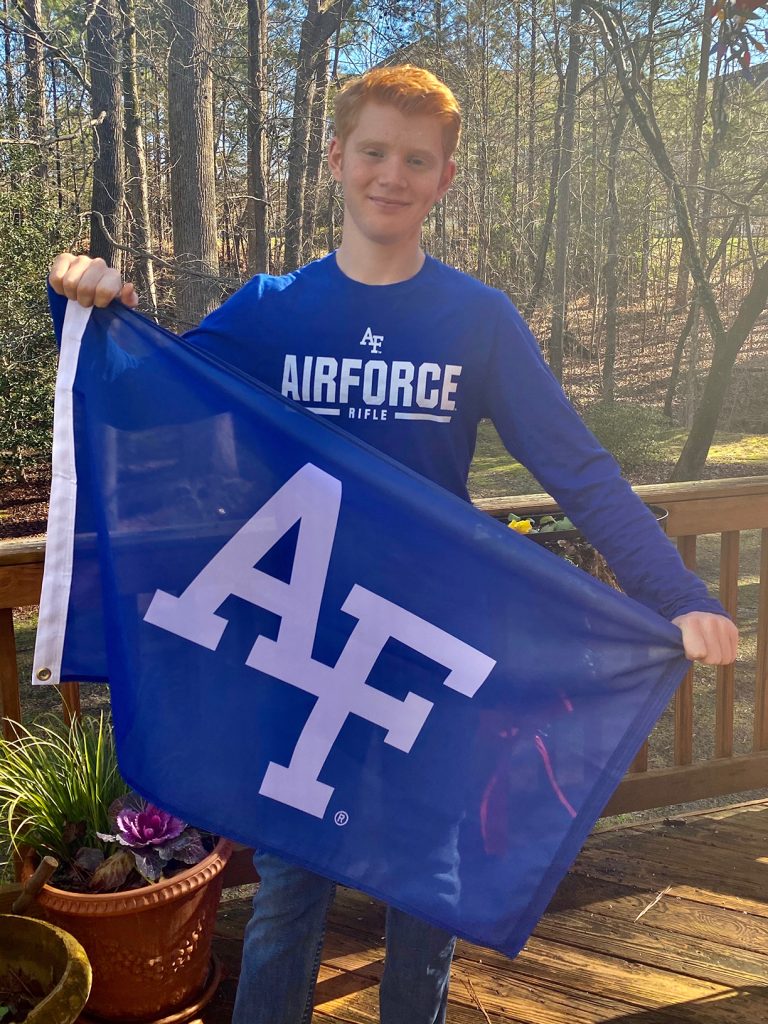 Scott will be attending the Air Force Academy in the fall as a member of the rifle team. “We, at CMP, send sincere congratulations to Scott and wish him continued success,” Inge added. Scott graduated from Crossroads Flex High School with an overall GPA of 4.39. While in school, he was the student counsel treasurer, student ambassador and captain of the rifle team. He also organized charity projects and raised donations for the homeless. “Words cannot describe how honored I was to find that I had been chosen as the Top Recipient of the scholarship,” Scott said. “To even be compared to an individual as amazing as Carolyn Hines is an honor among itself. I can only hope to be as great of a person as she was, but I will continue to strive for it every day and make an impact in this world – just as she did.” In the fall, Scott will attend the U.S. Air Force Academy as a member of the rifle team, majoring in aerospace engineering toward a career as a pilot. Whether fast planes or slow – he just wants to fly. “I am very excited and, again, honored, to be a part of the Air Force rifle team, and I am ready to get to work at the Academy and push to be the very best version of myself,” he said. 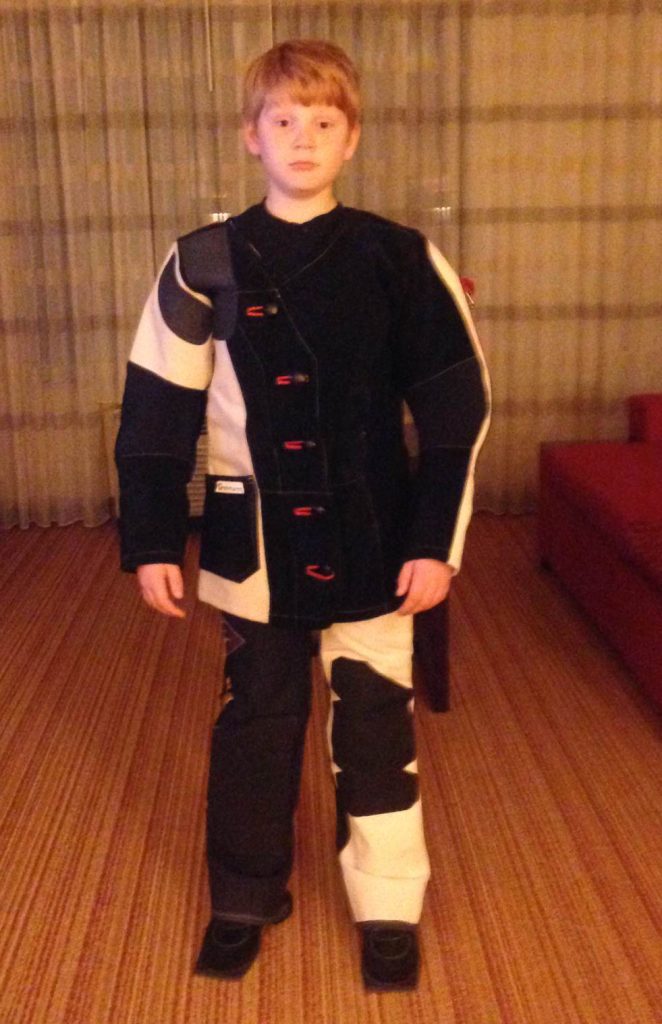 Scott became involved in air rifle nearly a decade ago at the suggestion of a family friend. Scott has been an athlete for almost a decade as a member of his high school, local club, 4-H, American Legion and Boy Scouts precision air rifle, smallbore and rifle teams. Given all of his other involvements while in high school, Scott is no stranger to an active schedule. But, according to him, keeping a full plate of interests has actually helped his rifle career along the way. “I absolutely think that it is important to stay well-rounded in life,” Scott said. “This will help you grow as a shooter and as a person. Doing other things that take your mind off of shooting is one of the most important things you can do as a shooter to push yourself to the top.”  He went on, “This may seem counterintuitive, but shooting is an astonishingly difficult sport that will drain you mentally and physically. If you lack the well-rounded lifestyle and dedicate yourself entirely to shooting, you begin to let shooting define your emotions and how you act. That being said, shooting is a sport of ups and downs, and your emotions will follow unless you give yourself other things to do so that you can separate yourself from shooting.” 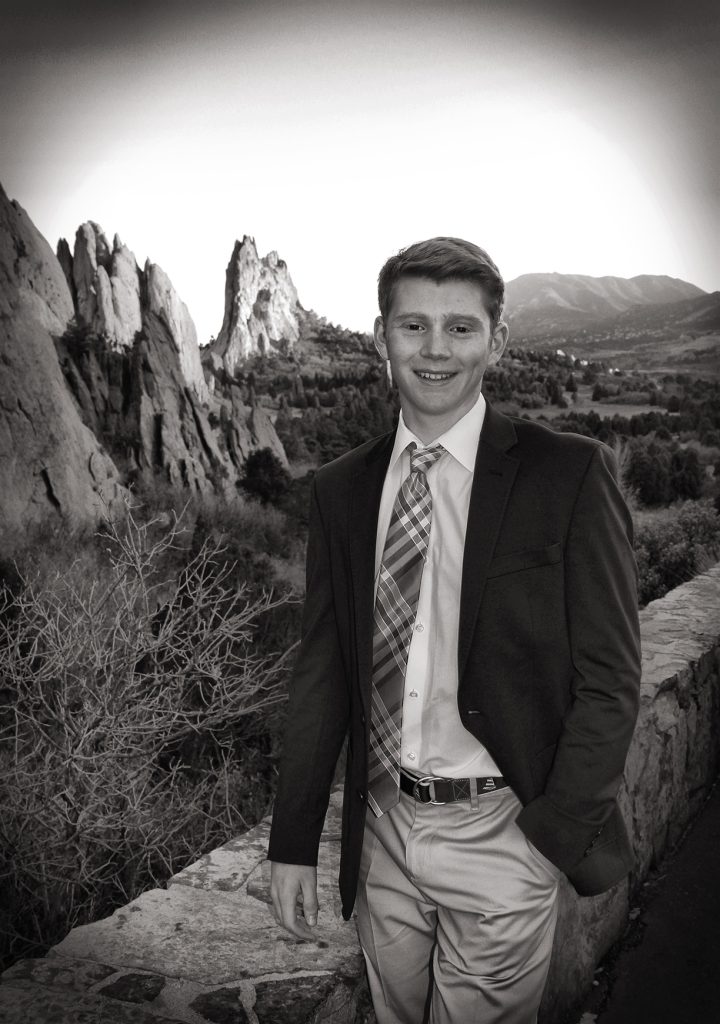 Scott excelled scholastically in high school, finishing with a 4.39 GPA. Scott became involved in marksmanship after a recommendation from his mom’s coworker, who happened to be the assistant coach of the North Carolina State Rifle team. With the suggestion, Scott made the trip to his local gun club to give the sport a try. “They had me start on a bench, and I had a great first experience, so I came back time and time again until I wanted to shoot so bad that I dropped travel baseball and football to shoot,” he explained. 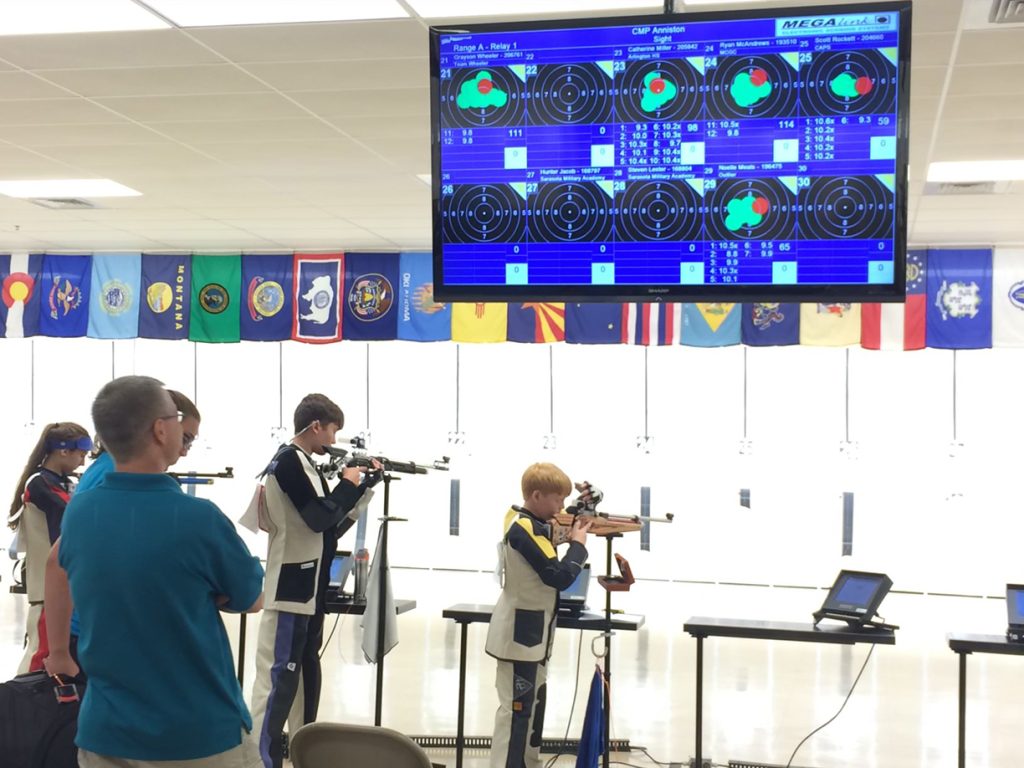 At CMP’s Summer Air Rifle Camps, Scott (in yellow) was initially acquainted with his future National Team Coach, Dan Durben (foreground), who was camp director. In 2014, Scott attended his first of many CMP 3P Summer Camps. There, he met Dan Durben, who was one of the directors of the camp at the time, as well as University of Alaska-Fairbanks alum and current Army Marksmanship Unit athlete Tim Sherry, who was a counselor. Scott credits the camps for fine-tuning many of his skills that led him to earn a place as a member of the USA Shooting National Team – where he was reunited with Durben, who is now the National Rifle Coach, and Sherry, who has become a fellow athlete and teammate for Scott. “It has been an amazing ride, and I am thankful that the CMP has helped me to achieve my dreams,” Scott said of the experience. 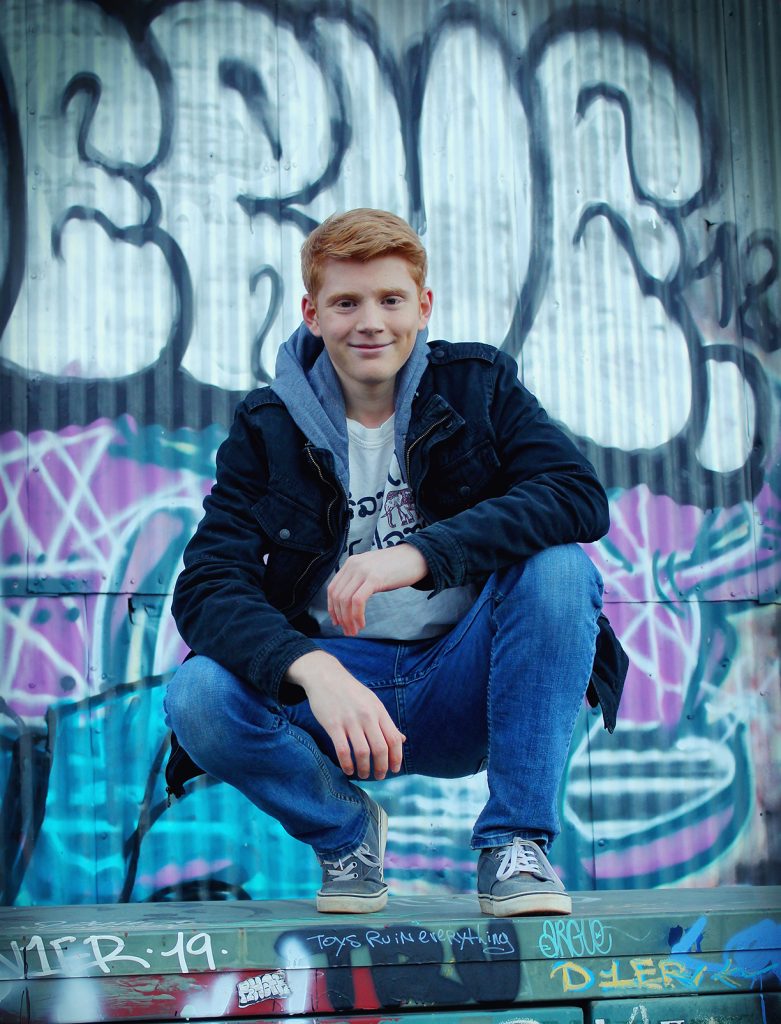 Scott stays well-rounded by participating in community service projects in his area. Scott earned his Junior Distinguished Air Rifle Badge in 2018 and went on to compete on national and international levels. In 2019, he claimed the overall spot in the J2 Air Rifle and Smallbore events at the Junior Olympic National Championships and also second overall at the 2019 CMP Smallbore 3P Iron Sight Junior National Championship at Camp Perry. Scott currently competes using his Walther LG400 Alutec for air rifle and his Walther KK300 Anatomic for smallbore. After a hiatus from regular competition like the rest of the world in 2020,  Scott joined other members of the USA Shooting National Team in El Salvador in 2021 for the Junior Airgun Grand Prix, where he earned third overall in men’s rifle and a silver medal in the mixed team competition, alongside teammate Katie Zaun. 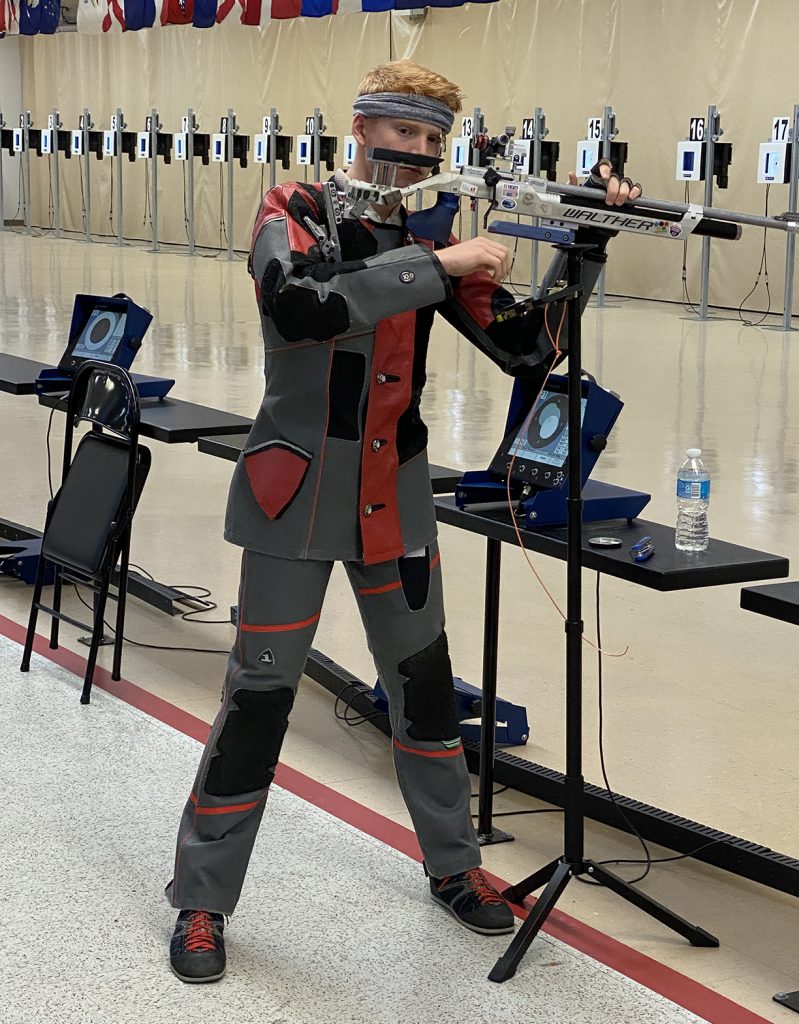 Scott uses a Walther LG400 Alutec for air rifle and a Walther KK300 Anatomic for smallbore. “I think that marksmanship has shaped me into who I am today,” he said. “One of the most important things I have learned from marksmanship has been responsibility and self-control. Learning these things has done wonders for me, on the line and off. With these skills, I can study and train smart, allowing me to do both with great success.”  Of all of his accomplishments, he says his most rewarding experience has been gained from going to his local gun club and aiding the next generation in the development of their own marksmanship skills. 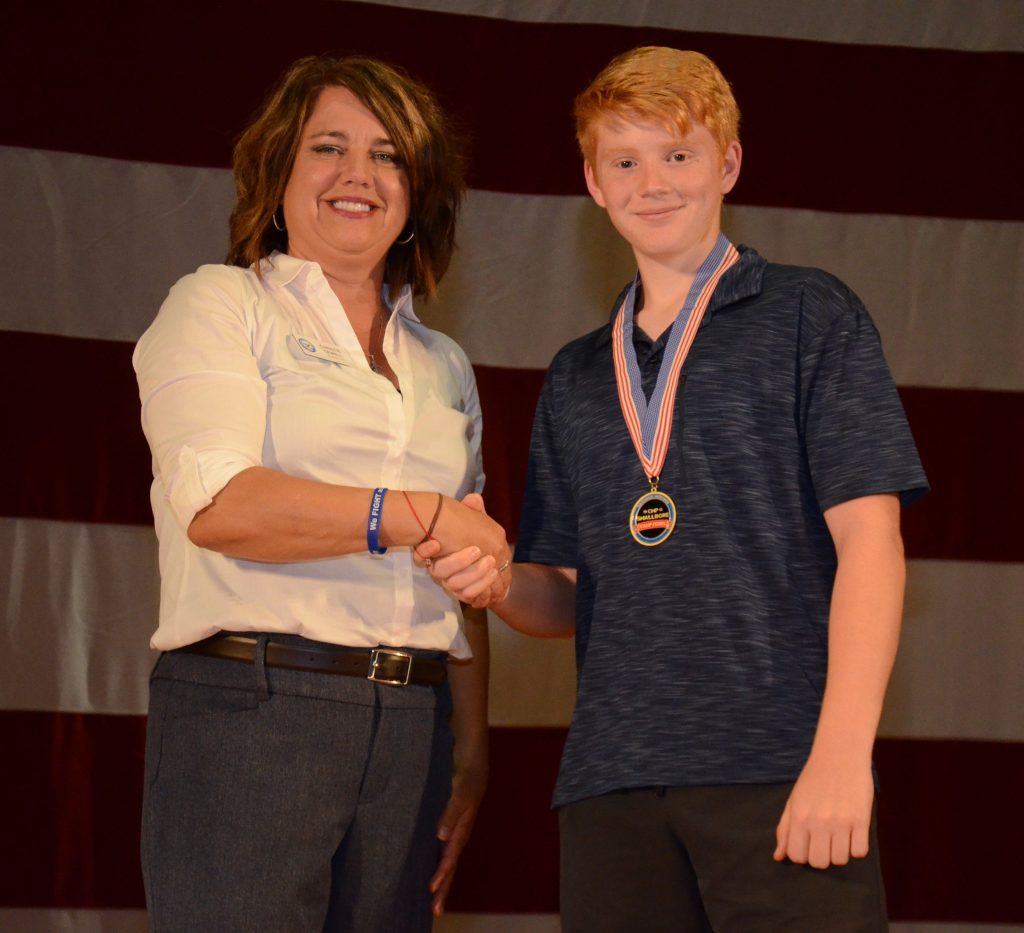 In 2019, Scott earned second in the CMP’s Junior 3P Smallbore National event at Camp Perry (shown with CMP programs chief, Christie Sewell). “At the end of the year there is a match for the kids, and watching one of the kids that I had trained win was the greatest feeling in the world,” Scott said. “I feel like this has been my greatest accomplishment because not only did I give back to the community to help another shooter find his wings, but he proceeded to volunteer at the club, helping the new shooters get a footing in the sport.” Scott is a true advocate of marksmanship. His long list of accomplishments more than proves his commitment to the sport, while his actions show the powerful strength of his character. And, he’s not done yet. He hopes to one day compete on the U.S. Olympic team, all the while working to take to the skies at the Air Force Academy. Though not quite in the clouds yet, here on the ground, there’s no question that Scott is already soaring. 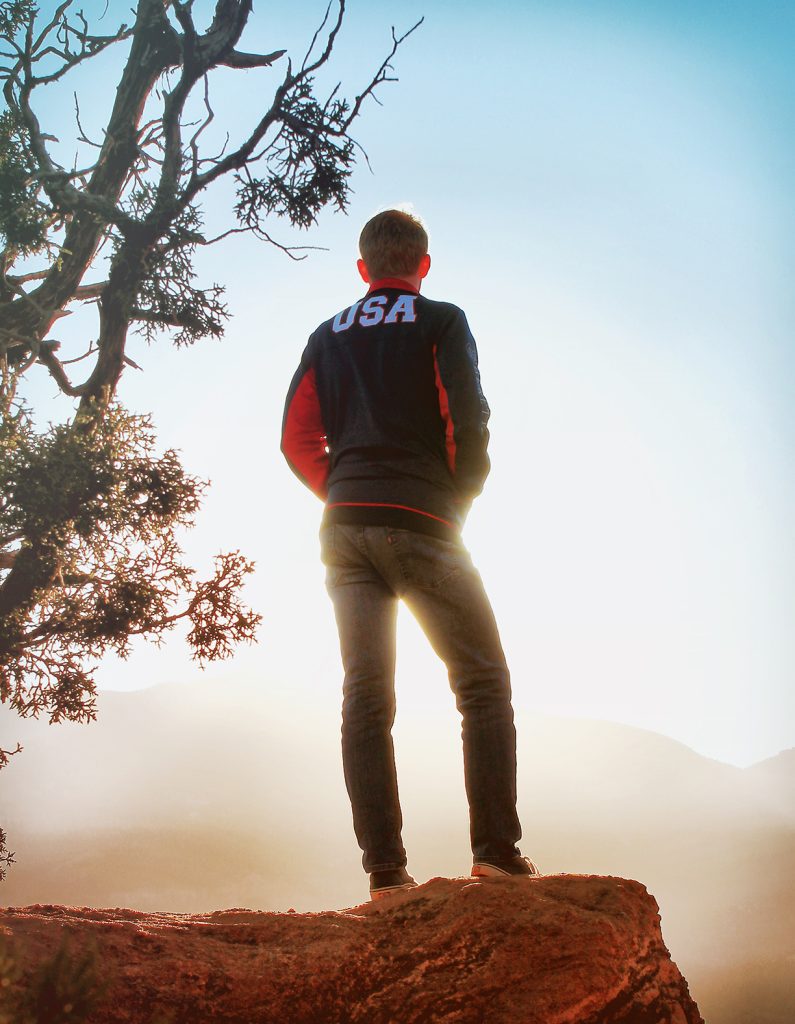 Scott says he will continue to advocate for the sport of marksmanship while working to one day join the U.S. Olympic team. “I am ready to push myself and others to be the best versions of themselves, and I will continue to strive for excellence in all that I do and make the most positive impact on the world that I can,” he said. Congratulations to Scott and all of the other CMP Scholarship recipients! Learn more about the Carolyn Hines Memorial Scholarship at https://thecmp.org/youth/cmp-scholarship-program/. – By Ashley Brugnone, CMP Writer The post Scott Rockett Earns CMP’s 2021 Top Scholarship Recipient Honor appeared first on Civilian Marksmanship Program. This content originally appeared at text and was written by Christine Elder This content is syndicated and does not necessarily reflect the views or positions of The Liberal Gun Club

Users browsing this forum: No registered users and 4 guests