Manchin (W.Va.) followed his Arizona colleague in voicing support for protecting the filibuster, which racial justice campaigners call a "Jim Crow relic" because it has been used so many times to block voting and civil rights legislation.

Berman said the pair "are like spineless Republican senators during end of Reconstruction who supported filibuster of voting rights bill that would've blocked poll taxes and literacy tests," actions that "ushered in 75 years of Jim Crow."

In a lengthy statement in which he declared that he "will not vote to eliminate or weaken the filibuster," Manchin cited former Sen. Robert Byrd (D-W.Va), an erstwhile Ku Klux Klan member and ardent segregationist who infamously filibustered the landmark 1964 Voting Rights Act for 14 hours. Byrd would renounce racism later in his congressional career.

"Senator Byrd's insight helped explain why at no time in the history of the United States has the Senate been able to end debate on legislation with a simple majority," Manchin falsely asserted, as the rules of the first U.S. Senate in 1789 allowed debate to end after a simple majority vote.

Some progressives also noted that just over a month ago, both Manchin and Sinema approved a carve-out to the filibuster in order to raise the federal debt limit.

Republican senators have blocked the bills by invoking the 60-vote filibuster rule.

Multiple outlets reported that Biden would meet with Manchin and Sinema Thursday evening in a last-ditch attempt to salvage the two voting rights bills.

When asked earlier in the day whether the president has accepted that he "cannot sway" the pair when it comes to the filibuster, White House Press Secretary Jen Psaki said that "we're going to keep fighting until the votes are had."

Vox senior correspondent Jamil Smith tweeted that Sinema "thought it would be a good idea today to spit on John Lewis' legacy," and that she and Manchin know that their "own party is the only one trying to repair a Voting Rights Act that requires repair."

The Fraternal Brat Twins are at it again and just shows the don't care one bit about the American people, only themselves.
Facts do not cease to exist because they are ignored.-Huxley
"We can have democracy in this country, or we can have great wealth concentrated in the hands of a few, but we can't have both." ~ Louis Brandeis,

2 by sikacz
They got what they wanted and were never going to go along with the agenda they wanted removed before the first vote. After that bill passed and was signed they were done. Fools everyone that thought different.

3 by highdesert
It's all about the 2022 election and neither Manchin nor Sinema are on the ballots in their states. In our hyper partisan environment, neither party wants moderates they only want true believers and the wings rule.
"Everyone is entitled to their own opinion, but not their own facts." - Daniel Patrick Moynihan 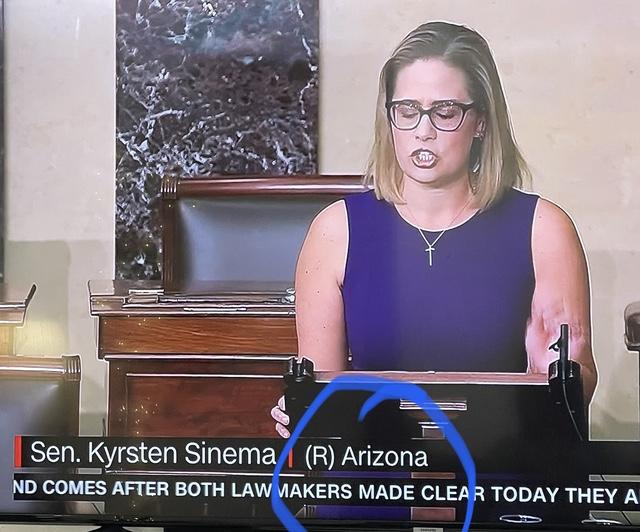 5 by tonguengroover
A couple good going around kyrsten semina here in AZ. She's feeling the heat and trying to counter with her own.
She needs to look for another job.


The ads, seen first by The Daily Beast, are so blistering that a viewer might momentarily forget that Sinema is not up for re-election until 2024—and that the ads are paid for by Democrats, not Republicans.

In one ad, a man named Tom, identified as a retired Navy veteran, tells Sinema in a direct-to-camera harangue, “you don’t have the political courage to do what’s right for Arizona!”

In another ad, a Phoenix pastor named Reginald Walton says to Sinema from the pews, “since going to Congress, you’ve become the problem.”

https://www.thedailybeast.com/new-dem-a ... he-problem
"The Worst Monsters are the ones we create. We are the monsters"

highdesert wrote: Fri Jan 14, 2022 11:44 am It's all about the 2022 election and neither Manchin nor Sinema are on the ballots in their states. In our hyper partisan environment, neither party wants moderates they only want true believers and the wings rule.

Yup and these 2 idiots are pretty much ensuring the GOPathetic will be successful in the 2022 midterms. AND if these GQP become a majority, the orange traitor will run for president in 2024 and that's scary.
6 posts
Post Reply

Return to “Resistance is Futile”

Re: The Supreme Court's golden rule: Only Republic

Re: Tonga's Hunga Tonga volcano blows: satellite p
It was an underwater volcanic eruption too at a ne
highdesert, Sun Jan 16, 2022 2:12 pm