Silly season is upon us, keep it civil, but this lets folks who don't want to watch the train wreck more easily avoid forced rubber necking.

Trump says he's a smart person so he only needs the intelligence briefing once a week.

Or maybe Trunip is getting what he needs to know from Putin.
Facts do not cease to exist because they are ignored.-Huxley
The illegal we do immediately; the unconstitutional takes a little longer-Kissinger
Reasoning will never make a Man correct an ill Opinion, which by Reasoning he never acquired.-Swift
Top

Maybe it's Midwestern humility, but most of the smart people I know don't have to remind people how smart they are all the time.
Do you believe in unlikelihoods?
Top

his intended audience appears to have problems with memory and comprehension. for that matter, given his gift for projection, i think he has those issues himself.
Top

The Turnip doesn't have a strong Rep majority in the Senate and he's pissed off a lot of Senators in his own party. He may not have an easy path in getting some of his confirmations through such as Rex Tillerson for SOS. Cozying up to old Vladamir, Turnip has unknowingly brought Reps and Dems together.

http://www.chicagotribune.com/news/nati ... story.html
"Everyone is entitled to their own opinion, but not their own facts." - Daniel Patrick Moynihan
Top

Who needs intelligence briefings when you've got tabloids?
www.schayden.com
Top 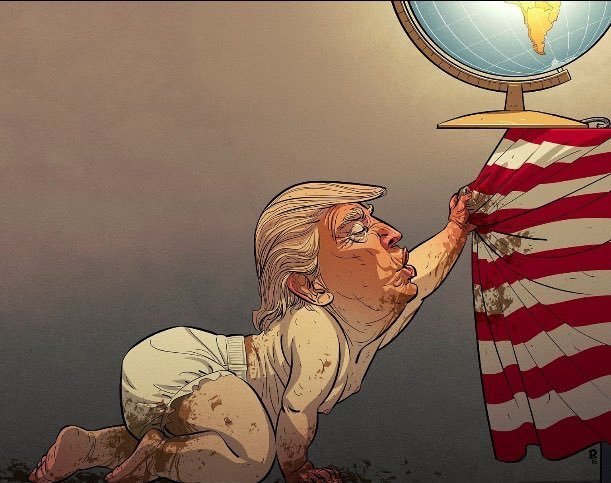 We used to play for silver, now we play for life.
One's for sport and one's for blood at the point of a knife.
Top

Think about this. If he has intel briefings, it would be harder to deny Putin helping in the elections.

"Not knowing a damn thing about this job is what got me elected, so continuing to not know shit will make me an awesome president."

More seriously, it seems likely that Trump intends to let other people do most of the heavy lifting with regard to policy, decision making and that whole Presidential job bit. Remember the idea that Dubya Bush was just a puppet for Cheney? That may be the case here, but this puppet is even more clueless.
"These are hard times, NOT end times!"
- Jon Stewart, Rally to Restore Sanity

Users browsing this forum: No registered users and 2 guests