How to: Make mlok hardware work like you thought it would

How to: Make mlok hardware work like you thought it would

1 by RedBanner
Mlok hardware is great, but I know I'm not the only one who thought they could still work better.
Well it's pretty easy to modify them to install or uninstall with 1 or 2 turns. Also never drop a t nut into the handguard again.
And alot of the times the t nuts won't turn easily into or out of the slot fully.
This is easy and could be done with just a file, and a punch, and a pencil or paint pen.
But it is even easier if you can scrounge up a piant stir stick, or thin trip of wood. And a tap to match the mlok screws. And some grinding sanding device. Dremel,grinder, belt sander whatever.


First step would to be installing the item onto the handguard. Doesn't have to be where it's going to live, it's better to place it somewhere that the tnut is accessible.
Because you will probably have to spin it in to place... and you want to be able to mark your screw.
Here is an example of some scales, one set is done, and one set is how they came, way too long. You can see my modified ones are basicly fish with the backnof the t nut. And the other stick way in, you don't want the screws sticking into the handguard like this for atleast 3 reasons. 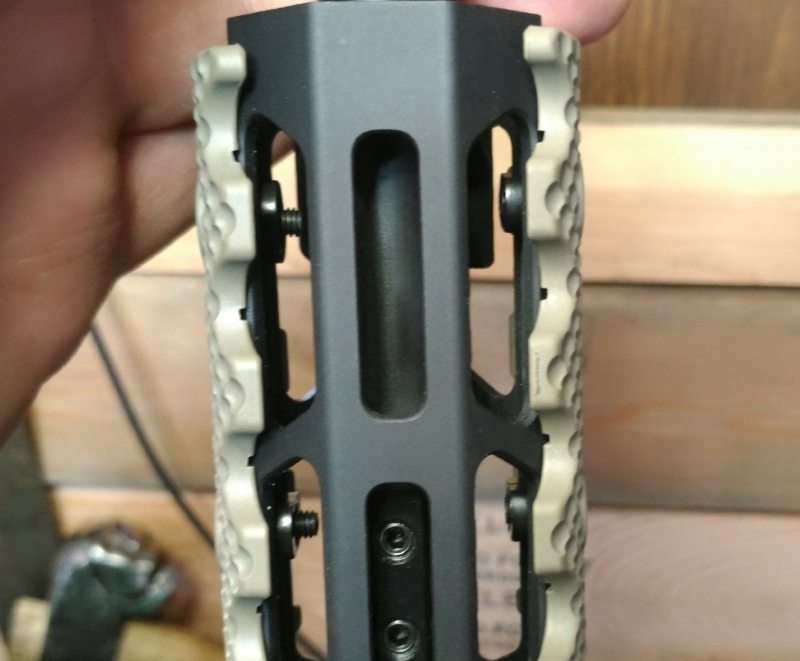 On this narrow handguard, the hardware actually touched the gas block. Wich is bad.

I tighted down the scales, juat snug,, not fully, and marked the first thread that stuck out the back of the t nut.

You can gently put the head of the screw in a vice or pliers and carefully grind or file or cut the extra off with anything, if you go slow and keep the screw relatively cool it will work fine.

But the way I like to do it, is tap a wood piant stir stick and run my screws threw it, till I can just see the marked thread on the other side.
Then I just hit it with my angle grinder.
Here is one I ground next to a standard one. 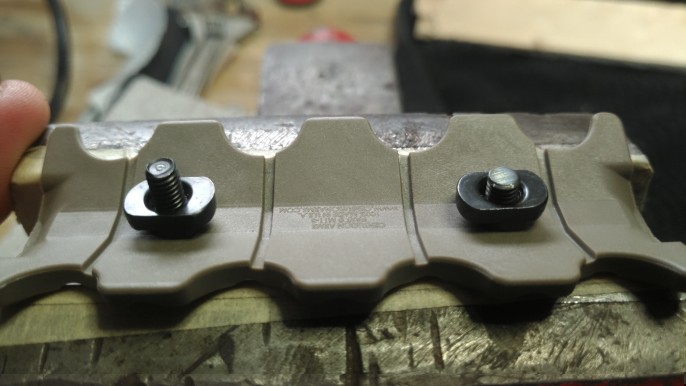 Once you have your hardware to length, you can install it and run the tnut all the way down.

You will want to find a sharp punch, probably could use a nail or screw if you had to though.

You will want to carefully use the punch to push the very last thread closed onto the second thread.
It doesn't take much. This pic shows the hardware with the last thread pinged over.
One with the t nut all the way out, one with it all the way down. 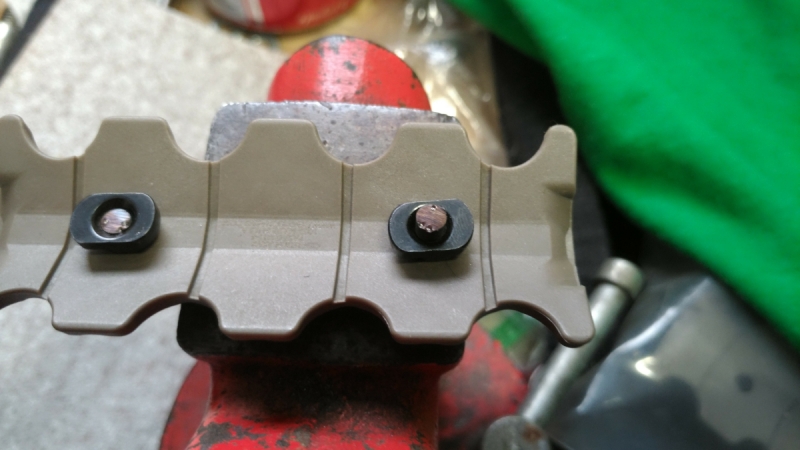 You can see that I used the punch to make 3 small dimples in the end of each screw. 2 at the very end of the last thread, and one about half way around. You could get away with as little as one spot, if you get it down.
They are right on the edge of the thread and pinch it closed.
This will not allow the t nut back off, it will reach that thread and grab hold of the nut, this will keep enough traction on the nut that when you reinstall the item, like my panel here, it will spin the tnut right into place. It will also keep the nut from falling off when you remove an item, and grab the nut and spin it out of lock.
No more needing to stick something in the guard to spin the nut in or out of place.

This makes mlok accessories about 2 full turns to install or remove also. Wich is what I had imagine them like when I first heard of them.
You can easily remove the screw if you had to, but either tapping the thread back open with the punch.
Or by forcing the screw out, normally.

I used these scales on an ar pistol, with mlok.
but it will work with any mlock or keymod hardware. And any hard ware you need to capture the nut on. Removable sights and such.

Return to “How To”

Users browsing this forum: No registered users and 6 guests

Re: US House Democrats file bill for mandatory han
I do believe senorgrand forgot the [/s] tag.

Re: Nevada home-built firearm ban challenged
I thought Nevadans were smarter than this. What h
CowboyT, Mon Jun 14, 2021 10:02 pm

Re: US House Democrats file bill for mandatory han