Pardini USA LLC, a distributor of Olympic-level rifles and pistols, has generously donated new air rifles and air pistols to the Civilian Marksmanship Program’s (CMP) air gun ranges. Available for use during public Marksmanship Nights, the company offered the air guns to each range in the hopes of supporting positive marksmanship activities for those currently within the sport and those just discovering the enjoyment it can bring. 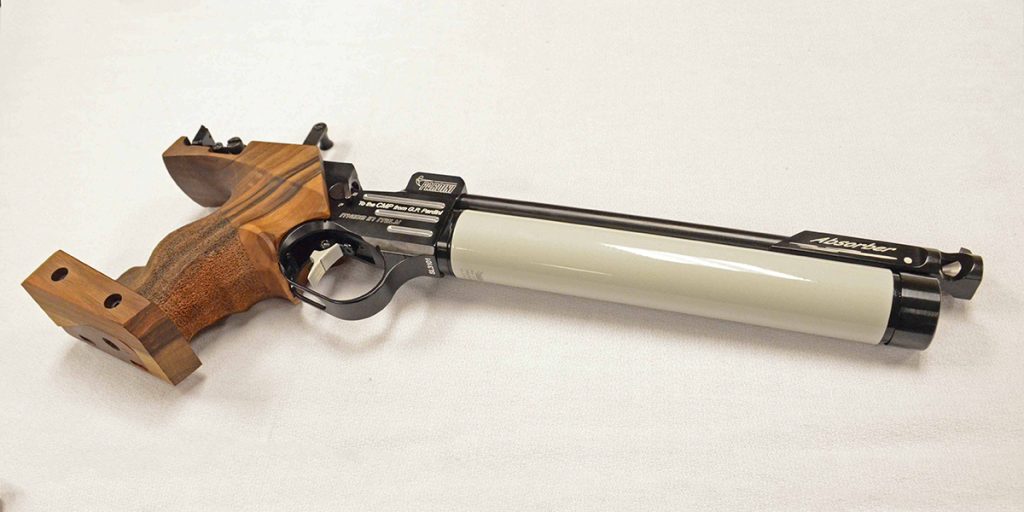 Each air gun range received two of these Pardini air pistols as well as a Pardini air rifle.

The Gary Anderson CMP Competition Center at Camp Perry, Ohio, and the South Competition Center in Anniston, Ala., both received a precision Pardini GPR1 air rifle and two Pardini K12 air pistols. The rifle was designed in collaboration with Niccolo Campriani, a three-time air rifle Olympic gold medalist, while the air pistols supplied by Pardini have been used to cultivate world champions in the sport.

Vladimir Chichkov, a partner at Pardini USA LLC, was a key patron of the air guns finding homes at CMP’s ranges. A long-time friend of the sport, Chichkov has been active within competitive marksmanship since 1975. Chichkov also coaches his son, Alexander, who earned the reputation as a successful air pistol competitor during the National Matches at Camp Perry – having won overall during the 60 Shot Air Pistol Match in 2014, 2015 and 2016 and earning the High Junior title in 2012, 2013 and 2014.

The donated air rifle was designed with the help of Olympic gold medalist, Niccolo Campriani.

With an ambition to turn his hobby into a career, Vladimir’s love of firearms and competition eventually led him to becoming a crucial contributor in the formation of Pardini USA LLC in 2009. Now, the company specializes in supplying, repairing and customizing competition guns, while also promoting marksmanship for the current and future generations.

“I would like to thank Vladimir Chichkov for taking the time to introduce me to Pardini USA rifles and pistols last year during the National Rifle and Pistol Matches,” said Lue Sherman, a CMP staff member who helps operate the air gun range at Camp Perry. “I think having these in our ranges, especially at Camp Perry where those who attend the National Matches will be able to witness the guns for themselves, will be great for both the CMP and Pardini USA.”

The air guns are specially engraved, “To the CMP from G.P. Pardini.”

The donated air guns are available for demonstration and use during the CMP’s Marksmanship Nights, held every Tuesday and Thursday evening from 5 p.m. – 8 p.m. in Ohio and 4 p.m. to 7 p.m. in Alabama. Whether a seasoned competitor or putting a shot downrange for the first time, everyone is welcome to participate in the fun. More information about Marksmanship Nights, including directions and what to bring, can be found by visiting http://thecmp.org/air/cmp-competition-centers/open-public-shooting/.