CAMP PERRY, Ohio – Patience and hard work paid off during the Civilian Marksmanship Program’s (CMP) 2018 National Three-Position Air Rifle Championship, as Nation Ford High School from South Carolina finally earned a win after falling short every year since the competition began back in 2016. The National event, featuring both sporter and precision junior athletes from around the country, was held at the Gary Anderson CMP Competition Center at Camp Perry, June 21-26. 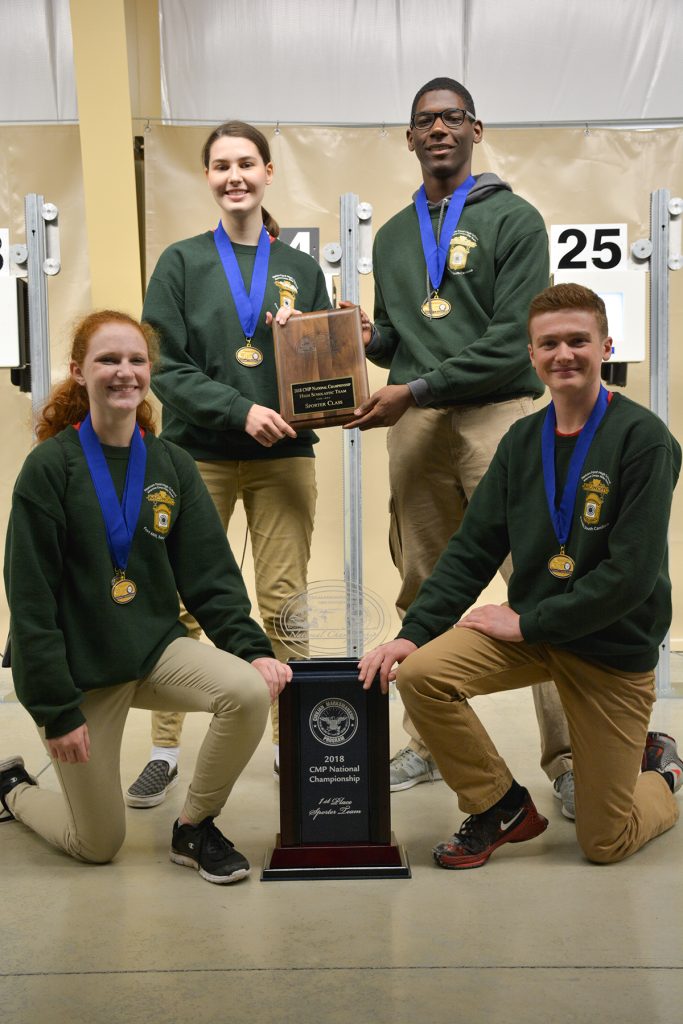 After landing in second place for years at CMP Nationals, Nation Ford High School finally made it to the top of the podium.

The team has always performed well at Nationals, earning second place in the CMP event in 2016 and 2017 but unable to reach the top of the podium. The team also found the runner-up position in the coinciding Junior Olympic National event in 2016, but went on to win the match in 2017.

“As I thought about this year’s National Championships, CMP Nationals and the Junior Olympic Nationals, I was quite aware of the high level of competition they would draw,” Colonel Mulcahey said. “I can honestly say that I had no expectation of winning either competition. I believed our team members followed their shot plan and my advice that they would perform well. Our team members competed with confidence and displayed mental toughness that allowed them to stay in control of their rifle and execute their shot plan.”

Colonel Mulcahey hasn’t changed his training philosophies or practice schedule for the past four years – sticking with what works by focusing on competition performance as if it were just another day on the range.

“If they approach a match as they do practice, the scores, points and titles will take care of themselves, he said. “What I strive to instill in my team members is to focus on being deliberate with each shot, follow their shot plan, expect a bad shot and have a plan to deal with it, and to fight for every shot – don’t give up no matter how poorly their performance is.”

Mulcahey also admits that outside of the team, there are many who have helped them reach their heights, including the school’s Booster Club and, of course, the many dedicated community members.

“As a coach, I have been blessed with many talented young male and female athletes. Their parents have been great supporting our training, practice and competition regimen. My partner-in-crime at Nation Ford, Sergeant Major John Logan, has been a positive force and source of encouragement to me and our team members.”

He went on, “Regarding the team members, I find them to be unselfish, dedicated and willing to place the team before their individual goals and desires. They have a great sense of humor. They like to tease each other. I enjoy being around them and feel a sincere sense of contributing to their shooting success.” 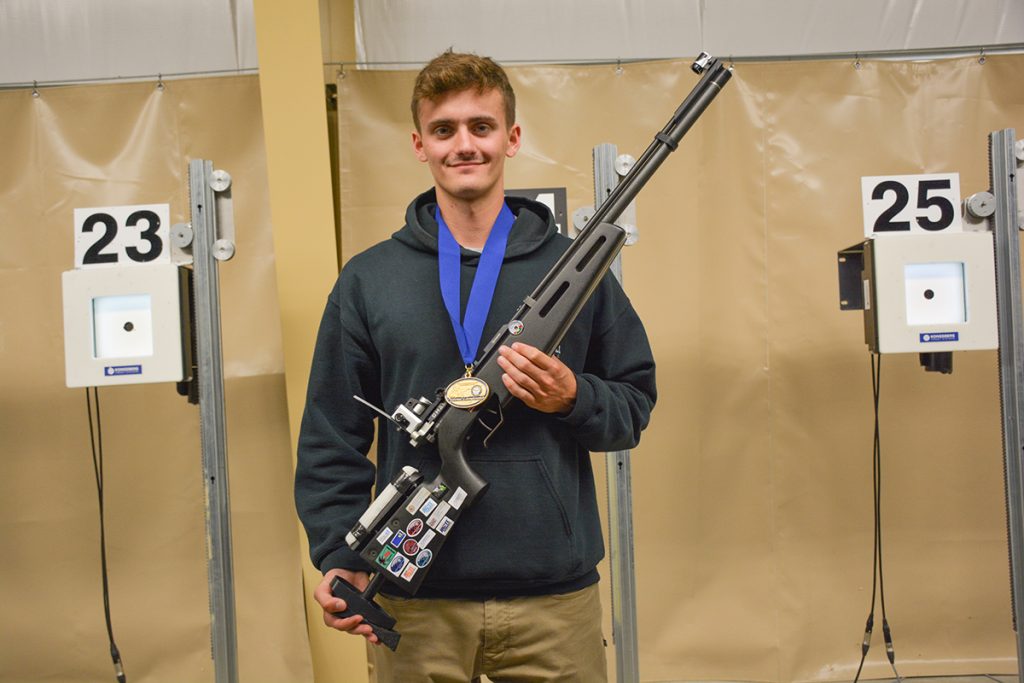 Simon Krauthamer was completely shocked when he heard he was the winner of the sporter competition.

Also earning an exciting win in the sporter competition was Simon Krauthamer, 17, of CRPC Junior Program in North Carolina, who topped the individual competition with a score of 652.3 – only one-tenth above second place finisher Halie Creekmore, 14, of Zion Benton High School in Illinois. Linsey Kleckner, 17, of Freeport High School in Illinois, earned the third place spot with a score of 651.1.

Krauthamer had an impressive showing at Nationals, with a third place finish in the Junior Olympic match that he said gave him the opportunity to prepare him for the CMP event. With college in his near future, he spent a lot of his air rifle season filling out applications, wrapping up his high school career and working a job outside of school – leaving little time to compete. But, he still arrived at Camp Perry with the hopes of taking home the championship title.

“Going to Nationals, I had the goal to win, because if you go into a competition with any other goal than winning, you will doom yourself, mentally. This is specifically important in sporter because it is mostly a mental game,” he said.

The battle for the sporter win was tight during the Top 8 final that would ultimately determine the winner of the match. Krauthamer gave it his all but didn’t lead that entire time – at least, not until the last shot, when the leaders each fired a shot in the 7-ring, boosting him up to the top of the podium.

“Going into the last shot, I was a little nervous, but I thought of it as a job I had to do, and all I needed to do was line up the sights and pull the trigger like I have done countless times before. And this time was no different.”

The moment happened so quickly that Krauthamer didn’t even know he had won until his name was called during the announcement of the winners. Now crowned with a National title, he is both in awe and humbled by what took place during the unforgettable event.

“It was kind of a weird feeling because I have been friends with people who have won before, but I never won myself, so it was kind of like a, ‘Oh, I actually did it this time,’ kind of feeling,” he said. “Being known as a National Champion is a nice title, but I find it’s cooler for people like my parents than it is for me. All I did was my very best, and this time it just happened to land me on top.” 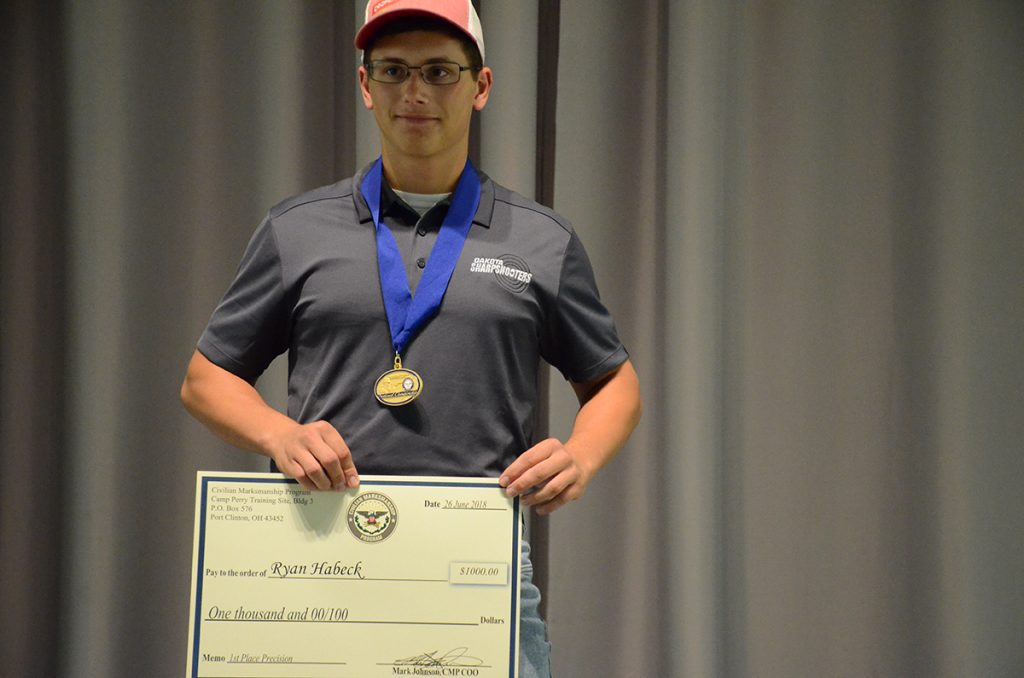 Ryan Habeck was the overall precision competitor. He is now set to begin at the Air Force Academy this month.

In the precision event, Ryan Habeck, 18, of Dakota Sharpshooters in South Dakota, overtook the class with a score of 695.7 – just two-tenths of a point over last year’s champion and this year’s Junior Olympic winner, Katie Zaun, 15, of Buffalo Sharpshooters in North Dakota, who landed in second. Rounding out the Top 3 was Antonio Gross, 18, of Webster Junior Marksmen in New York, who earned his USA Shooting jacket back in 2016 during the National event as the top male competitor.

Winning precision teams were the Arlington Optimist Acorns CJRC Ice from Virginia, with a score of 2350-161x, Patriot Shooting Club, also of Virginia, trailed by only one point with 2349-155x for second, as the Ole Mill Rangers from GA took third with a score of 2346-157x. 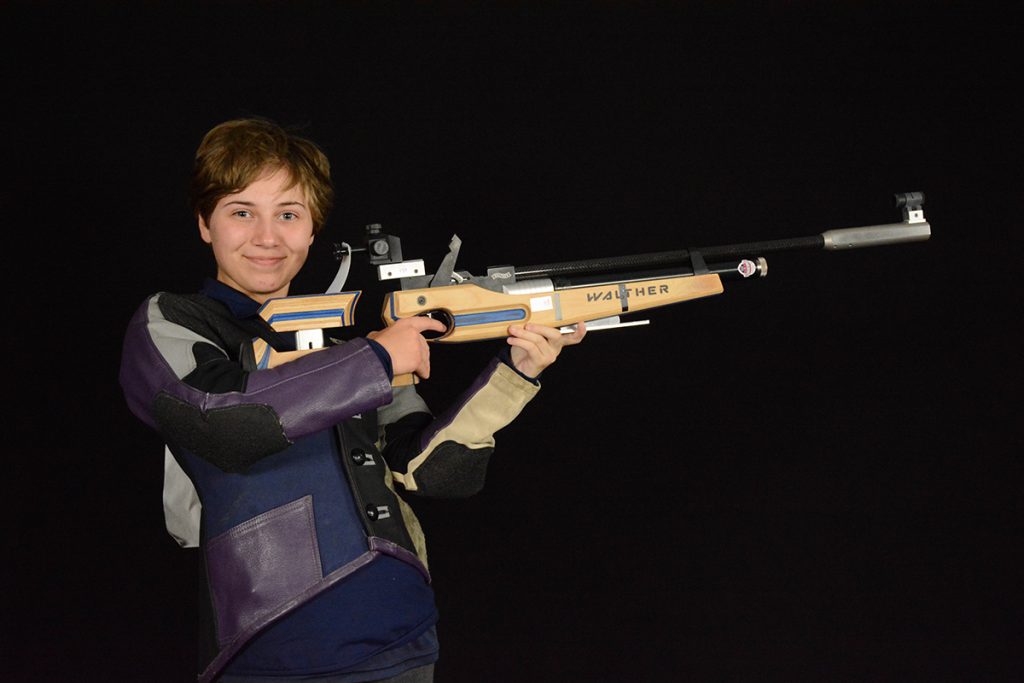 Moira Antal was the first Paralympic athlete to compete at the CMP National event.

Another notable presence during the week was Moira Antal, 14, of Bealeton, VA, who made her debut at the CMP National event as the first Paralympic competitor. 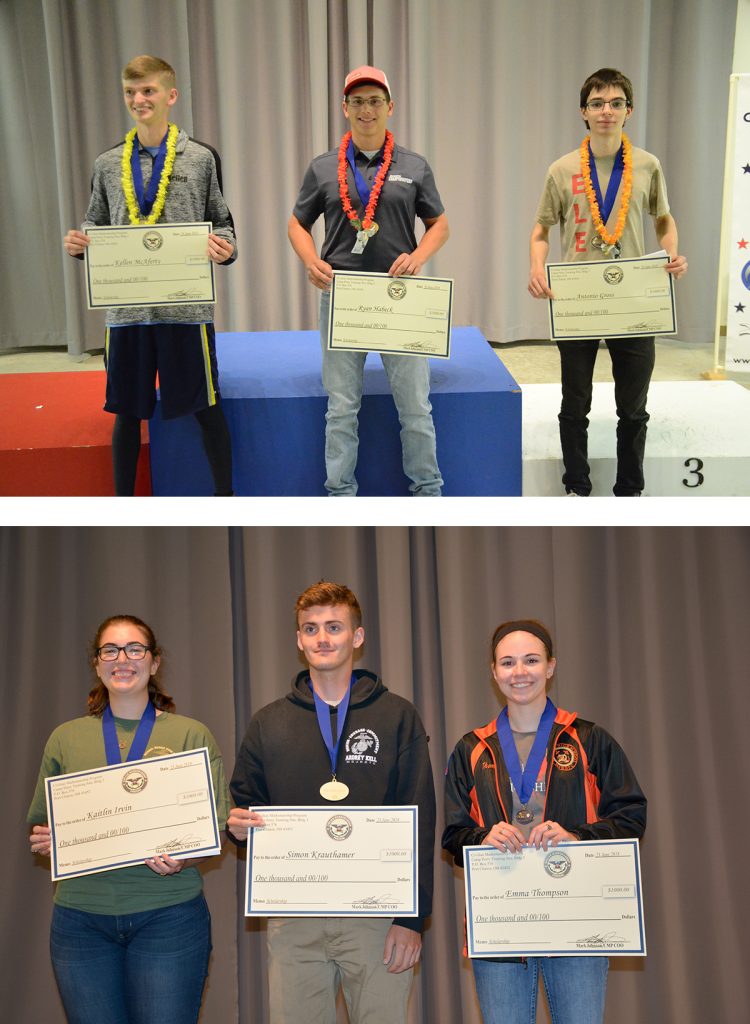 The CMP awarded $1,000 scholarships to the Top 3 graduated seniors.

The National Air Rifle Championship is a three-position event, where sporter and precision competitors fire two days of competition – the Junior Olympic Nationals, followed by the CMP Nationals. Competitors fire qualifying scores each day, with the Top 8 competing in a final on the line to determine winners. The top male and female competitor over the two days also receive places on the USA Shooting junior team. Earning spots this year were Katie Zaun and Kellen McAferty, 18, of Capitol City Junior Rifle Club in Washington. 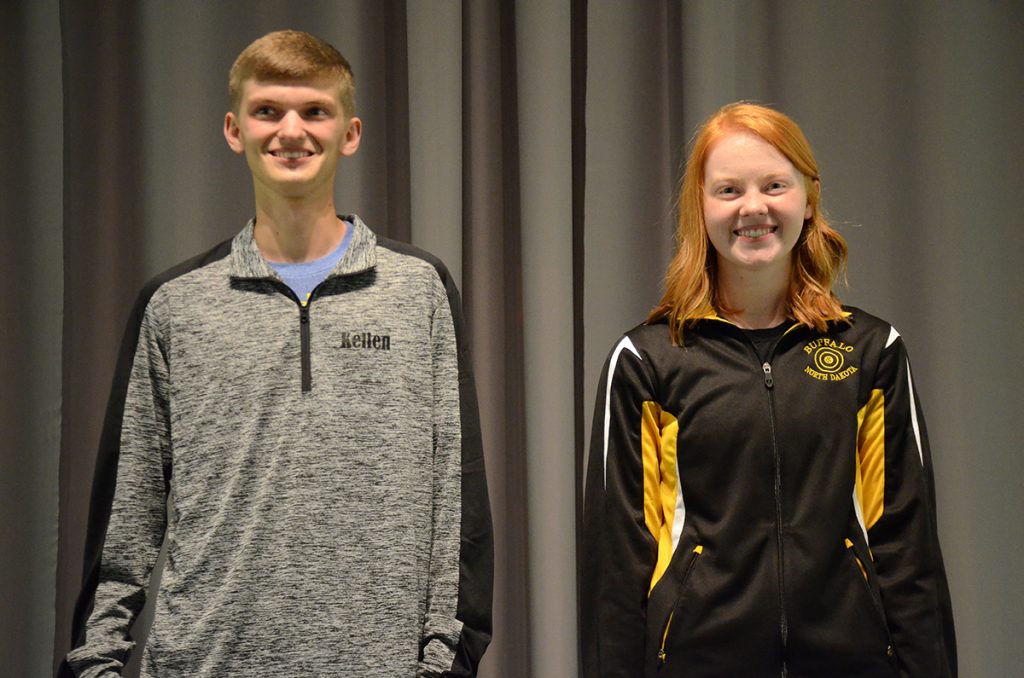 Katie Zaun and Kellen McAferty were the highest scoring female and male competitors of the events.

For a complete list of results of the CMP National Three-Position Championship and the National Junior Olympic Championship, visithttps://ct.thecmp.org/app/v1/index.php?do=match&task=edit&tab=results&match=17067&tab=results.

Photos of the event can be viewed and downloaded for free from the CMP Zenfolio page at http://cmp1.zenfolio.com/f279118263.