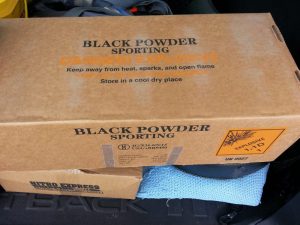 A couple of summers ago, I got together with some friends and we did a little black powder shooting. Well, since then we’ve talked about getting together again with even more great historical guns (reproductions) and another shooting buddy, and this past weekend we did just that. 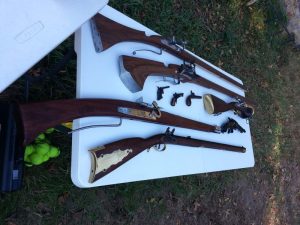 Total of 21 shown, with one extra hiding in that brown case in the second pic.

I’m not going to try and give a real review of every one, but using the two pics above I will identify each gun, maybe add another pic or two of it in action, and provide some initial impressions of shooting it. So, without further ado, starting with the top image:

Top gun: Early Matchlock Caliver. .62 ball, 60gr FFg. A pleasure to shoot. This felt less bulky than the earlier guns, but you had to be careful to position the thin upper buttstock such that it was against the bicep, rather than tucked into your shoulder as with a modern style of gun. The lighter weight did make the recoil more noticeable. 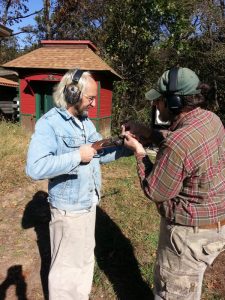 Below that: Swedish Snaplock. .77 ball, 60gr FFg.  Very similar to the Caliver in how it felt, though the mechanism is a type of flintlock. The larger ball would have probably benefited from more powder (the rule of thumb is about 1gr of powder per point of caliber, to start with), but it still had no problems penetrating the 3/4″ plywood at about 15 yards.

Under the Snaplock are three small Pedersoli handguns:

Some pics of the Guardian and Liegi being shot: 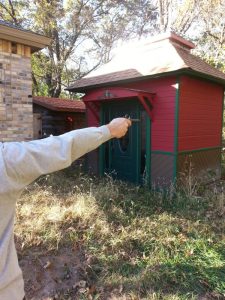 To the right of the Pedersoli handguns is a Hand Mortar. This has a .75 chamber with a 2.5″ bore. Which, it so happens, is perfect for shooting a tennis ball … 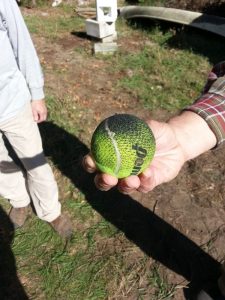 Keith shot the first ball at our plywood target, using 75gr of FFg. The tennis ball bounced right back at us. So we reused it, this time increasing the load to 100gr of FFg, shooting it into an adjacent field. It lobbed about 60 yards. The last shot was with 120gr of FFg, and that sent the tennis ball 75+ yards. I expect that if you stuffed some wadding or such down into the .75 chamber, and tamped it appropriately, that you’d get much better performance. But we were laughing too much to think of trying that at the time.

Under the Mortar is a LeMat Cavalry revolver. The 9 chambers are .44, and we used a .451 ball with 40gr of FFFg for each. The center chamber can also shoot a 20ga shot load, but we decided not to fuss with that. We used the recommended #11 percussion caps, but #10 would have fit better. This gun was new, but the trigger was *extremely* hard to pull and cocking the hammer almost took two hands. It would probably benefit from a fluff & buff … but I don’t think I’ll run out to buy one to try it.

To the left of the LeMat is an Early Matchlock Arquebus.  .58 ball, 60gr FFg. Surprisingly easy to shoot, and reliable under the pleasant autumn conditions we had. All of us found it easy to hit close to point of aim, even with the significant delay you have with a matchlock. 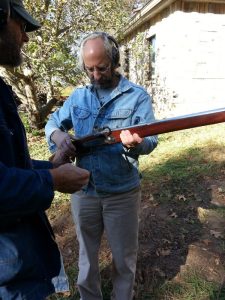 Below that: a Kentucky Flintlock Rifle. .50 (we used a .490 ball) with 60gr of FFg. This is the iconic flintlock for most people, and felt & shot well. Though curiously, the delay from ignition of the pan to the rifle firing seemed long to me, compared to my Mortimer (see below).

Starting at the top, on the left side of the image: simple Hand Gonne in brass. .62 ball with 60gr Fg. After pouring in the powder, you just drop the ball in without a patch … and have to pay attention that you don’t let it roll out again. We started the day shooting this, and all had entirely too much fun. Initially we used 40gr of Fg, and were able to pick up and reuse the ball, since it just bounced off the plywood target.

Below the Hand Gonne is my 1815 Mortimer flintlock. .535 ball with 60-80gr of FFg. I’ve written about this gun previously for my personal blog, and really enjoy shooting it. Even with the more powerful loads, there’s very little recoil … because the damned thing weighes a ton! But it is well broken in, shoots very well, and is accurate in my hands to at least 100 yards.

Under that is my new 1858 Remington Revolving Carbine. .454 ball with 30gr of FFFg. This was my first outing with this gun, and I just love it. We all were able to shoot about 4″ groups at 15 yards the first time. With a little practice, I am sure I can extend that considerably. Here’s  a couple of images of it from this weekend:

Under that is a French Blunderbuss. .735 ball with 60gr Fg. This was the first time any of us had shot one of these muskets, and we were all pleasantly surprised at how accurate and reliable it is. I can now understand why it was considered such a valuable weapon for close combat. 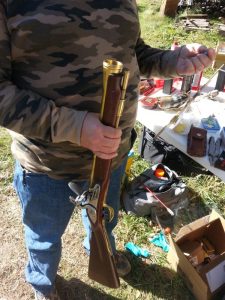 Next down is the Kentucky Percussion Rifle. .50 (we used a .490 ball) with 60gr of FFg. This is the twin to the iconic flintlock up above, and shot nearly identically … except that the #11 percussion cap gave immediate ignition to the charge. A very nice shooting rifle.

Next to last on the left side of the second image is a Japanese Matchlock. .50 (we used a .490 ball) with 60gr of FFg. I had shot this one previously, but it was fun to revisit it and compare it to the other matchlocks we had. All of us found it easy and accurate to shoot.

At the bottom on the left is a 1766 Charleville musket. .68 ball with 80 grains of FFg. This gun had probably the longest delay of any of the flintlocks we shot, but was still very fun to shoot, went off reliably, and seemed very accurate.

On the top of the right side of the second collection of guns is another 209 primer only 4.5BB carbine: the White Hawk. This was *surprisingly* fun to shoot! It was easy to use, accurate, and the .177 pellet seemed to hit with more authority than you would expect, though we didn’t test it for power. All of us had to try this several time. I could really see this being a fun little thing to shoot in your basement or some such. 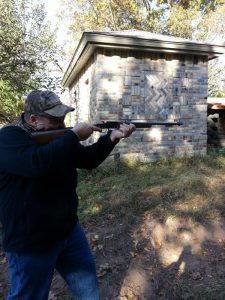 Below the White Hawk is a Howdah Hunter: a twin-barrel .50 percussion cap gun which we loaded using a .490 ball with 30gr of FFFg. While heavy and with a stiff pair of triggers (one for each barrel), this was easy to shoot than I expected. Recoil wasn’t bad, and accuracy was good.

Under the Howdah, hidden (unintentionally) in the gun case, is a home-made Hakenbushe (hook gun), a variation on the early hand gonne which had a ‘handle’ that was a steel spike, used for close defensive work after the gun had been fired. This one shot a .735 ball with 60gr of FFg, and like the other hand gonne above, didn’t use a patch. So you had to make sure not to tilt the barrel down, or the ball and powder would roll out.

Under that is a classic Hawken rifle. .50 call (.490 ball) with 60gr of FFg. This may be more popular than even the Kentucky long rifle, and it was a fun old friend to revisit. 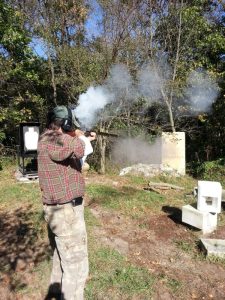 Lastly, two nice flintlock pistols, only one of which we were able to actually shoot. That was the 1763 Charleville pistol, .68 ball with 40gr FFg. A classic cavalry pistol which was very easy to shoot.

The remaining flintlock is a Murdock Scottish highland pistol .52 cal. Unfortunately this one needed to have the touch-hole reworked a bit. So perhaps we’ll get to shoot it next time …

Special thanks to my friends and cohorts: Jim, Keith, and Roger. I appreciate you sharing your guns and knowledge, but most of all your friendship!