Here is part II, how I’ve found the ejector and interrupter system works best.  This is not to say this is the only way, but rather what I’ve found to work 100% by experiment. 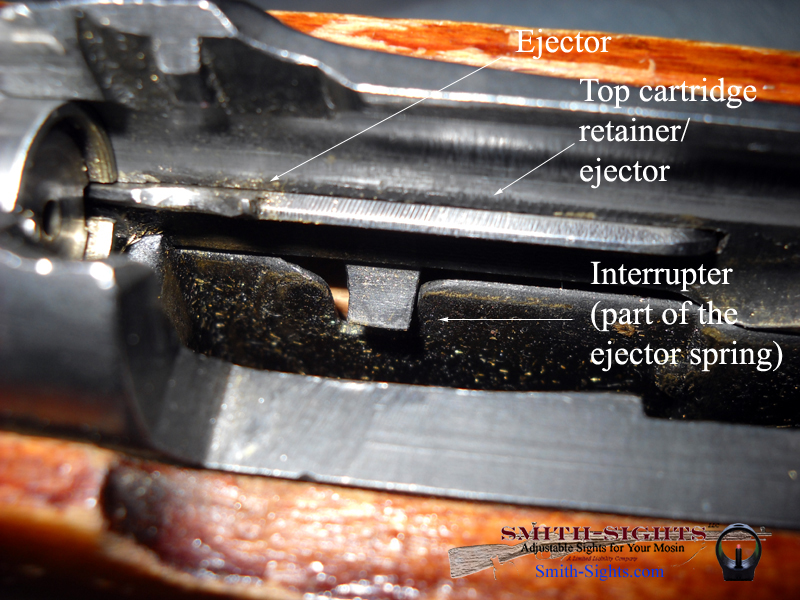 The ejector retains the top case and ejects the empties, while the feed interrupter, located on the spring, keeps the next round low enough so that the rims don’t lock. 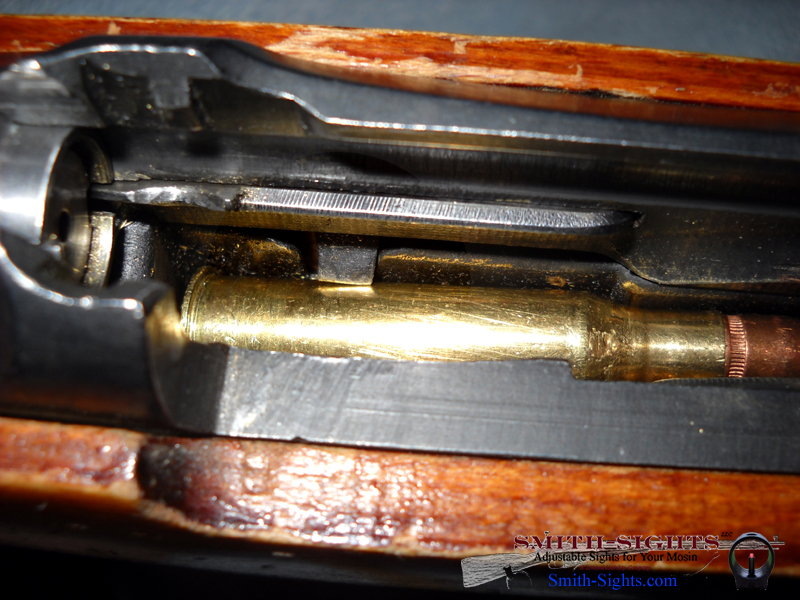 With a single round… 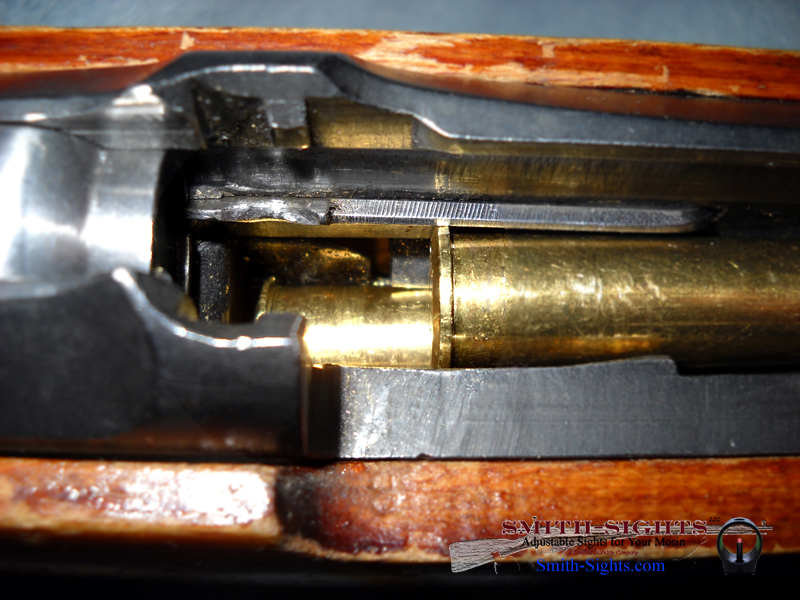 If your interrupter isn’t functioning, first check stock clearance.  If it still doesn’t function, you may have to replace it. 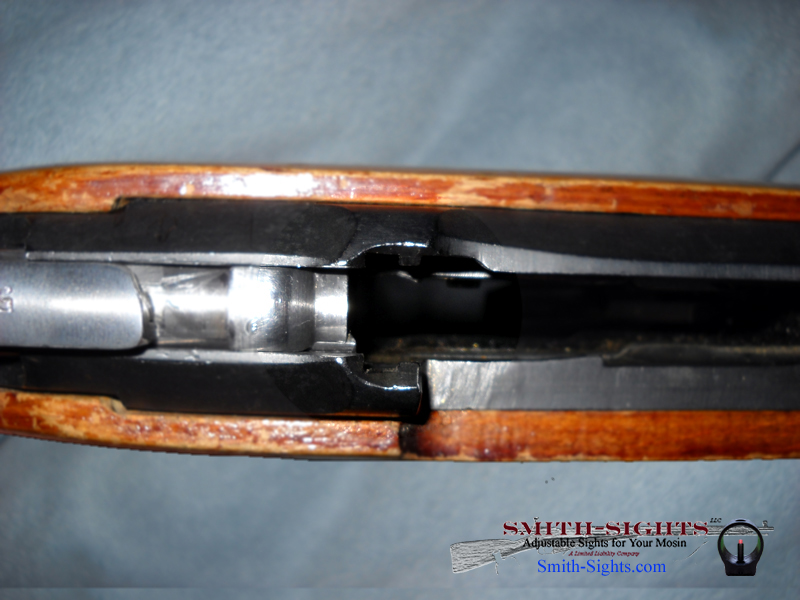 If you will, compare the rear of your ejector to the rear of the one in my rifle.  Is there clearance for the stripper clip to function, or when you press down on the stripper clip, is the ejector pushed down as well, to the point that it blocks the rounds from feeding into the magazine? 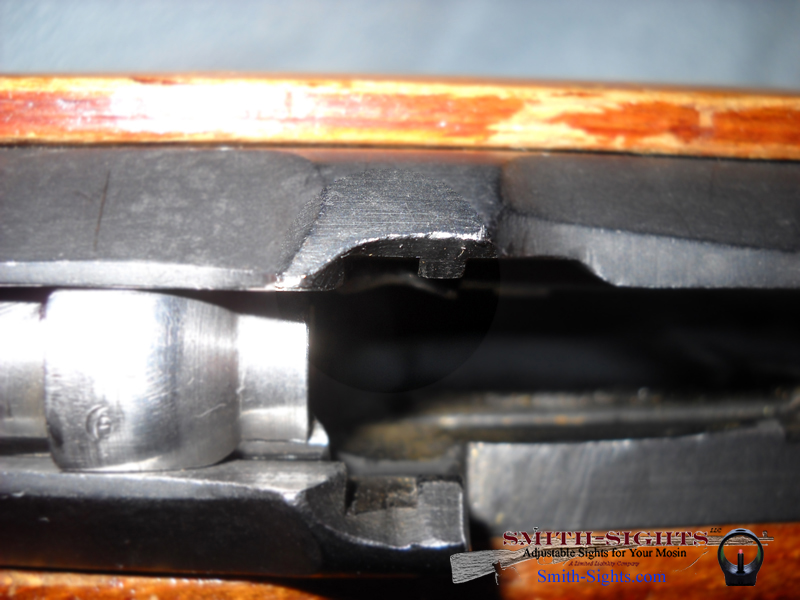 Using a jeweler’s half-round file, slowly deepen the half-moon crescent shape where the clearance should be.  Go slowly and check often as too much clearance will allow the stripper clip to sink into the mag well.  The rounds will still strip from it, but you risk the rounds spewing back out as the clip will hold open the ejector and interrupter.

Rimlock:
If you experience rimlock, you’ll need to take a look at the feed angles.  I’ve seen instances where they’re too steep or shallow.  A steep feed angle will allow the top round’s rim to contact the next one down and lock up the works. 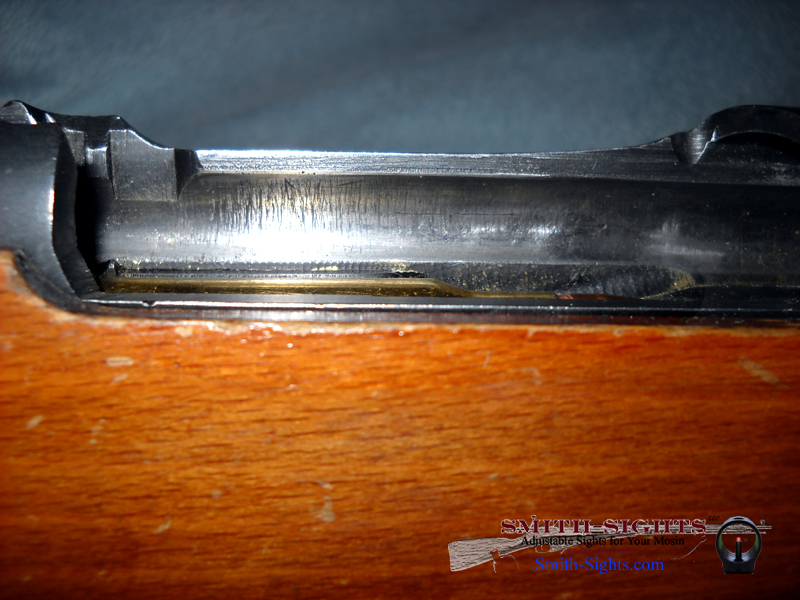 This is the minimum feed angle.

Any less than this and you’ll be bashing the nose of the bullet into the feed ramp.  Not so much of a concern with FMJ rounds as with soft point, you [i]may[/i] still experience dangerous bullet setback.

This is the maximum feed angle.
Any round that has its nose higher than that risks rimlock.

So, how’s this fixed?
Very easily. 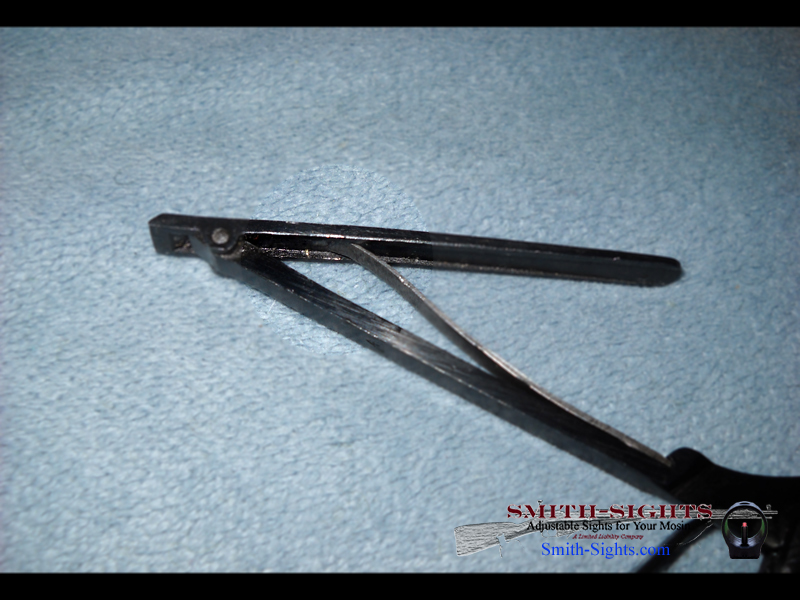 In my case I had to make the rounds nose down.  I put an “S” bend in the top spring and that worked very nicely.  You’ll have to adjust it a little at a time, but you’ll find the sweet spot for your particular Mosin.

Sometimes, a round will not be picked up. Seldom, a round will ride under the bolt.  This is mostly due to feed angles, but sometimes the mag springs can be worn or the joints simply are not allowing the follower to extend upwards all the way. 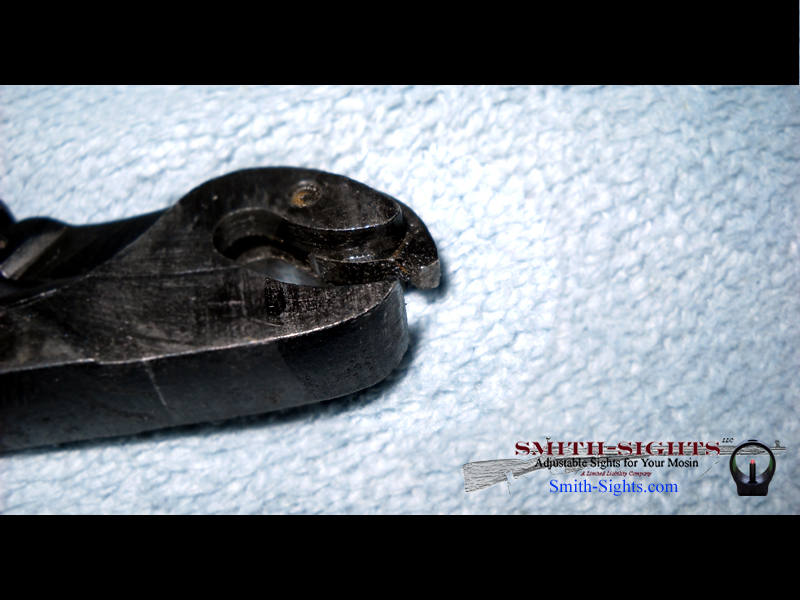 Filing the above location, one stroke at a time and testing it after each stroke, will allow the follower assembly to extend further upwards.

The Mosin-Nagant is a sound design.  However, it suffers from poor execution many times, especially when we’re talking about the Russian models.  We just don’t hear many problems with the Finnish models.

This is due to a couple reasons:  First, the Russian models are generally considered to be pikes first and firearms second.  They were arming a huge mass of conscripts, many of whom had never held a rifle before.  The Finns, on the other hand, were experienced marksmen.  The Finnish rifles are riflemens’ weapons.

Second, the Russians were often producing these under extreme time constraints.  Many times rifles and submachine guns went directly from the factory to the front lines.  In fact, the City of Tula and the arsenal located was under attack during Operation Barbarossa, yet the city still had to be defended… and you thought you had a hard day at work?

The Finns were not generally under this much pressure due to a smaller production requirement and the fact that their factories and machinery remained relatively intact.

For those of us who cannot afford the Finnish rifles or simply want beater rifles to carry around, the Russian Mosin-Nagant, with a little care and tweaking, works wonders.  In fact, taken far enough, one might not notice any practical shooting differences between one or the other.