The MA State Championship is fired over a two day period. Combining both aggregates is a test of marksmanship and consistency.

Scene from the Massachusetts State Mid-Range Championship 2017 at Reading Rifle and Revolver Club.

Moving back to the 600 yard line, tensions were high. Mirage was very switchy, and several points were lost across the line. Still, Mike Pietrowicz and his scope managed to record a score of 199.13, and Robbie Greene, who fired with irons, shot a score of 199.09. Barbara Lamb, FTR, finally met her match back at 600 with Mike Landolfi tying her with 197.05.

Day Two was a new beautiful day, and with points so close, that first place was up for grabs by several shooters. Stage 4 started out a little differently when a competitor’s rifle extractor broke and could not be fixed. Instead of having to drop out, his fellow competitors on his point helped him out, taking turns in running a cleaning rod down the barrel to push out the round. This continued throughout the match, and through teamwork, all were able to shoot and complete the match. He shot very well despite the little added distraction.

Stage 4, 600 yards completed with Rob Greene firing a 200.11 to hold the lead by two points, but there were still two more stages at 600 to go and anything could happen. Close behind was Mike Pietrowicz, two points behind, while Jeff Hirtle and Charlie Trickett were both three points behind. Barbara Lamb in FTR started out strong with a 200.15. 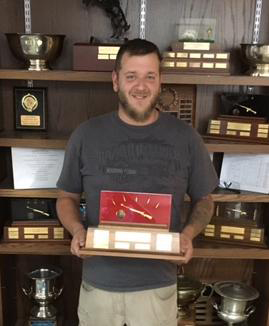 The point spread continued to narrow as Stage 5 completed. Rob Greene was still in the lead by one point after firing a 198.14, but Jeff Hirtle finished strong with a 200.13. They went into the final stage just one point apart after a two-day battle of not only score, but a battle between iron sights and scope (Rob Greene with iron sights and Jeff Hirtle with his scope). But Jeff Hirtle, hanging in strong, finished with a 200.10. He  pulled ahead of Rob Greene to take first place, and Barbara Lamb finished up with a 196.10 to win the FTR division.

Reading Rifle hosts a full range of of matches from May through October. For more information, go to www.readinghighpower.com and go to the calendar for match information and bulletins. You can also contact the highpower director Charlie Trickett at charlie@trickettwoodworks.com.