Pat Farmer hadn’t felt the weight in his hands in almost 60 years. After five decades, the memories flooded back as his fingertips grazed the wood of the stock and gripped it tightly. It was a piece of his personal history, and the history of his country, that his eyes hadn’t seen since he was a teen – and now, it’s a relic he’ll be able to keep for the rest of his life.

“I had never dreamed it would be in the CMP (Civilian Marksmanship Program) warehouse,” he said. “I had just hoped to possibly start a search beginning with the CMP.”

After almost 60 years, Pat Farmer was reunited with the M1 Garand he used while serving his country.

The 74-year-old from Jacksonville, N.C., is a retired military member who served 26 years in the armed forces. He was raised on a farm in Nebraska where he became familiar with guns at an early age, but his first true rifle range experience wasn’t until he entered the U.S. Marine Corps after high school.

As a teen, Pat became impressed by the Marines and enlisted his senior year on a delay program. On Aug. 30, 1960, he officially left for the Marine Corps Recruit Depot in San Diego, Calif., to attend boot camp – where he celebrated his 18th birthday, unfortunately, without a cake.

Upon arrival he was issued M1 Garand #4305638. The firearm soon became a close companion as he spent countless hours with it on the "Grinder" – a Marine Corps term for a deck or parade ground used for drill and formations.

Pat was eventually selected for aviation school after infantry training and shot on the rifle team while attached to a Reserve unit. He went on to shoot expert rifle at the Camp Mathews rifle range, what is now known as the University of California in the San Diego neighborhood of La Jolla, and he also shot competitively at a local club.

“It was some of the best and most rewarding years of my life,” he said.

Many years later, Pat one day went through an old locker box and found his custody receipt from Jan. 27, 1961, when he turned in his boot camp rifle before transferring to aviation school. Curiosity set in as he wondered whatever became of M1 Garand #4305638 – and the idea of finding it overcame him.

“I had purchased a few rifles from the old DCM and also CMP, so on a whim I decided to contact CMP to see if my old M1 had ever passed through their system,” he explained.

In October 2013, he contacted CMP customer service and was put in touch with Jennifer Smith, the serial number/inventory clerk. To Pat’s amazement, he soon learned that the very same rifle he used in boot camp was being stored at the CMP facility, but was still Army property. Unable to distribute the rifle until the Army formally turned it over to the CMP, Jennifer informed Pat that it may take some time until he’s able to see his rifle again.

With 32 requests currently held at the CMP, Jennifer says individuals often call looking for rifles that they or a family member carried during a time of military service. Unfortunately, with thousands of them around the world and heavy restrictions, success in locating specific rifles is rare. Of course, the staff members within CMP still do everything they can in the hopes of finding each distinct rifle.

“I have been in the serial number/inventory department for approximately eight years, and there have only been about five rifles that have been reunited,” Jennifer said. “If we do not find the rifle in our current inventory when we are contacted, we keep the serial numbers and periodically will search again in case it has been received in new shipments.”

As she explains, a rifle can be tagged for an individual if it’s in inventory. At that point, it’s still a waiting game until the day the Army releases the item to the CMP. After being released, staff members are able to verify the serial number, inspect and grade the rifle, then send it off for purchase.

Unfortunately, as in the case of Mr. Farmer, it can take years for the process to carry out, depending on how deep the crate is buried in the warehouse.

After Pat heard that CMP indeed had his rifle, he was anxious to get it back but understood the possibility of a long delay.

“He was very patient,” Jennifer remarked.

Pat was in contact with Jennifer about every six months to see if anything had changed – if his rifle had been released. Then, a little over three years later on March 20, 2017, true to her word, Jennifer contacted Pat and told him the Army had released more rifles – including his.

After a short period of processing and grading, on April 24, 2017, Jennifer contacted Pat again, asking him to send in his paperwork so he could, after 56 years, be issued his rifle again.

“Fifty-six years ago, we drilled and did the manual of arms with M1s as if they were matchsticks. It seems much heavier now!” he added, with a laugh.

Bringing it back to life, Pat began to fieldstrip the rifle. As he got to the trigger housing of the gun, he found something that he couldn’t believe – tape with his name and markings on it. It read, “Farmer 20/8L.” Pat believes it was his 500-yard “dope” – twenty clicks elevation, eight clicks left windage. 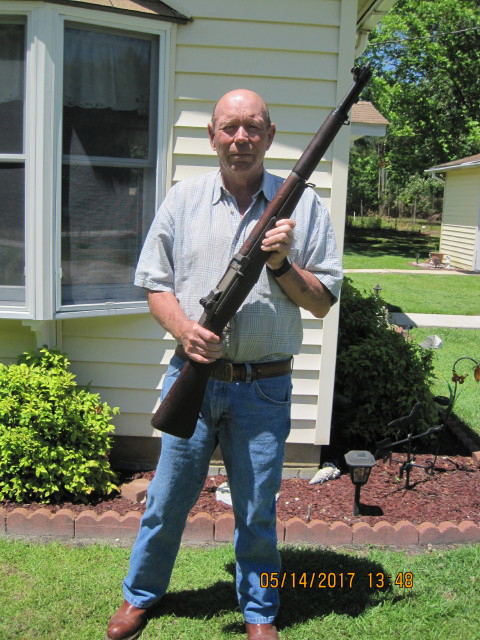 Pat plans to fire the M1 Garand he was recently united with, then store it in his safe and eventually pass it down to one of his grandsons.

The visible inscription is proof of the rifle’s limited use after it was issued to Pat. And now that it is back in his hands, he intends to give it a couple of nostalgic trigger pulls, then put it in a place where its history can be admired for years to come.

“I'm going to shoot a few rounds, clean it and put it in the safe,” he said. “I’ll take it out occasionally, and try to do the manual of arms correctly. One of my grandsons will eventually get it.”

Pat also mentioned his heartfelt ‘Thank You’ to the CMP for everything the staff managed to do to make the reunion possible, but he especially acknowledges Jennifer for her patience and all of her help in getting back a sentimental piece of his life.

“Searching our records for past service rifles is only a small part my duties, but it is one of the most rewarding ones,” Jennifer said. “While anyone in our department could have assisted Mr. Farmer, I am glad it was me who was able to do so. I was able to share his story with my family, and it helped show them why the CMP, and my job here, is so special.”

Jennifer says that she has personally been able to help reunite three individuals with their M1s during her time at the CMP, confessing each story has been special. Not only does she keep these individuals in her memory, she also keeps pictures of each of them with their rifles in her office to remind her of the unique and life-changing benefits her job can provide.

“It is very rewarding to be able to reunite someone with a part of their past that they thought had been lost forever,” she said. “It is not just the rifles, but the stories and memories surrounding them that make them so sentimental to an individual.”

“Not many people have the opportunity to reunite someone with a piece of history after fifty-six years,” she added.

If you have a serial number carried by you or a close relative that you think might be stored within the CMP warehouse, feel free to contact the Civilian Marksmanship Program and Jennifer Smith at jsmith@thecmp.org.

The post Man Reunited with Rifle from His Youth with Help from the CMP appeared first on Civilian Marksmanship Program.