Written by Miles Grove of the California Grizzlies

It's 6:30 a.m., and as usual, the Camp Perry Ohio National Guard base is humming with activity. Military jeeps cruise the roads, the last soldier leaves his barrack and a dozen men crowd the flagpole, ready to raise the flag at 7:00 am. However, this morning is a little different than usual.

The base's two massive firing ranges, each a 600-yard-long field ending in a row of 100 targets, are full of people. Military personnel and civilians alike roam the grass, all carrying rifles and searching for their designated firing point. This is the first day of the National Trophy Rifle Matches – the annual competition between the nation's best rifle marksmen.

On the other side of the base, there is a long “L”-shaped building bordering a small grassy park. The building is a sort of motel, serving the elderly civilians who come to compete in the National Matches. In room 113, a light bulb springs to life, illuminating the king-sized bed, couch, table and small kitchen. This room is Connie's home for the next two weeks while she attends the National Matches.

Connie Taylor (right) has been a helpful hand to the Grizzlies for years. She stays modest, quick to note the generosity of the many others who have also guided the Grizzlies along the way.

Connie is from Jamestown, California – home of the California Grizzlies youth rifle team. Although not a competitor, Connie flies to Ohio every year for the National Matches to help the Grizzlies. She's worked with the team for 22 years, ever since her son Robert joined the team and attended the matches.

Her efforts have molded the Grizzly program from a ragtag assortment of young shooters into a strong curriculum of marksmanship, integrity and responsibility. Although 17 years have passed since her son was on the team, Connie remains a major part of the Grizzlies. 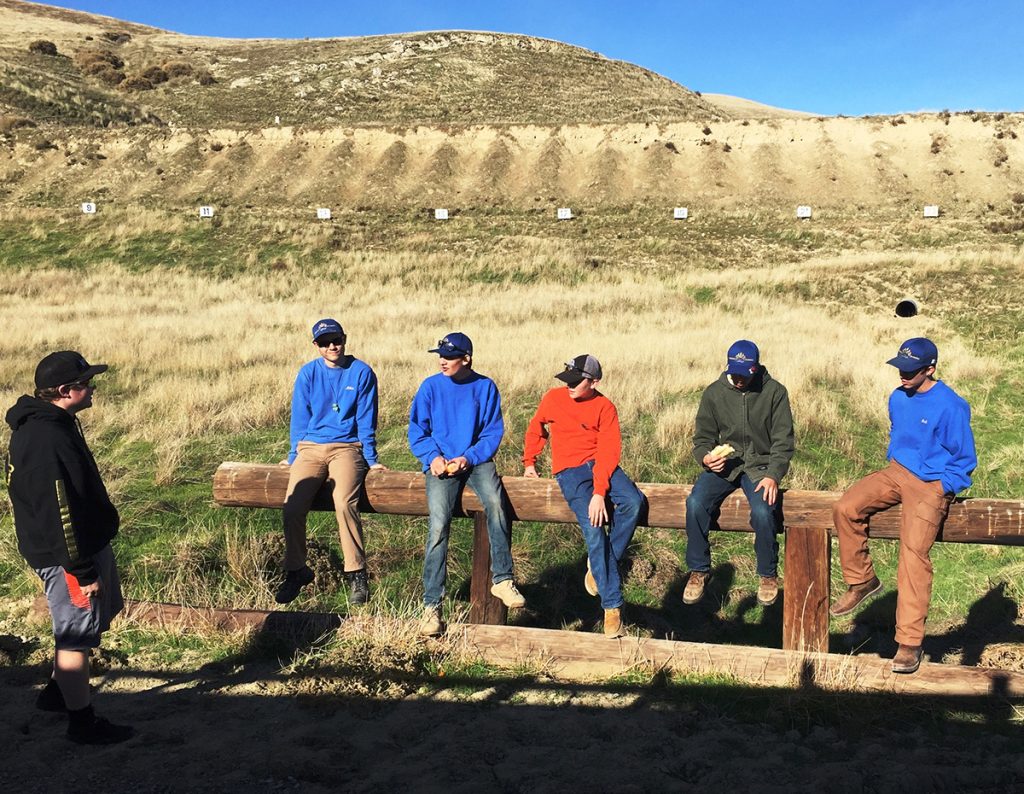 The California Grizzlies began as a local youth club in Jamestown, California to teach kids firearm safety. The group, aged 12-20, had only a handful of members who were taught safety and marksmanship by a lone coach. The few members were local kids with an interest in shooting. The club had hardly enough members for a full team in the National Matches, and although the group attended every year, they were usually at rock bottom.

Connie first got involved in the club when her sons, Robert and Ed, joined the Grizzlies. The two boys regularly attended the program and eventually started teaching the younger club members. Connie helped as a mom, driving Robert and Ed to the gun range and making hotdogs for the weekly practice sessions. Three years after Robert joined the group, the head coach asked him to fly to Ohio with the Grizzlies.

When he came back, Robert impressed Connie with a newfound level of maturity. She says, "He was a totally changed kid. He had goals and different things in mind he wanted to accomplish. That was my convincing that I wanted to be more a part of the junior team." 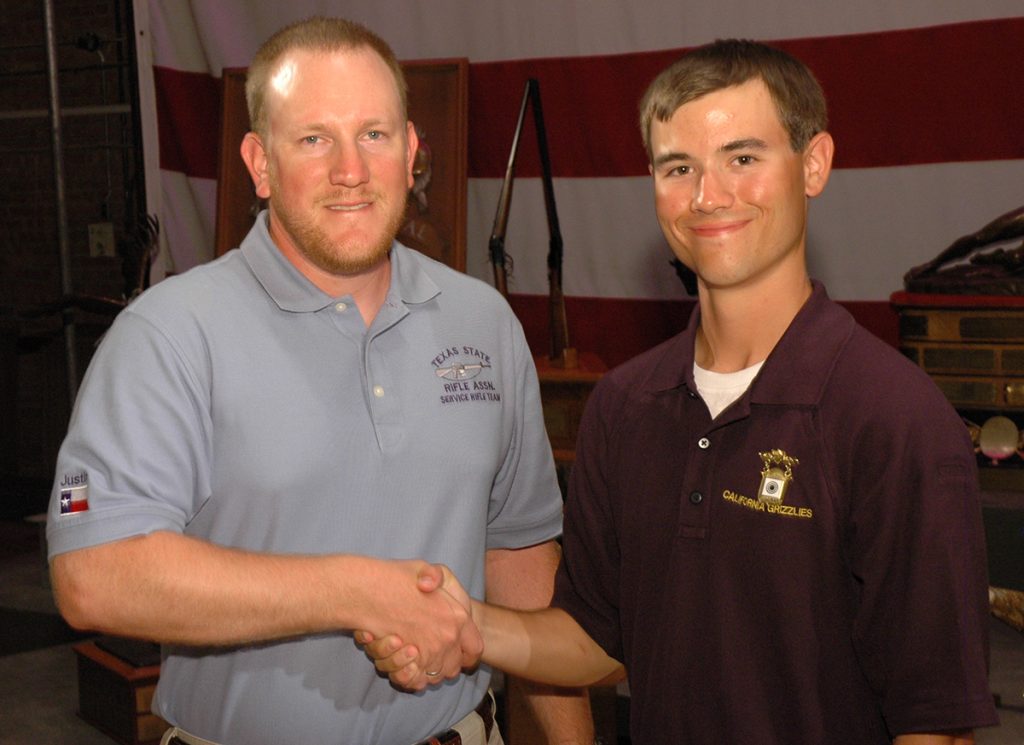 "I was just so impressed with the kids and the people involved that it was important for me to be more involved," she said.

From talking to the coach of the Grizzlies, Wayne, Connie knew that none of the kids' parents helped the team. Wayne felt exhausted and ready to retire. He'd been managing the shooters, their transportation, housing and match registration all by himself for years. From him, Connie grabbed the reigns, taking over the team's paperwork and leaving Wayne free to focus on coaching.

In her first year assisting, Connie filled out medical safety forms and registered the team for competitions. Wayne was free to forget about the clerical side of the team – so free that he forgot all the important documents in California!

"Luckily," Connie says, "I made copies and faxed them to him. Since I started doing paperwork and started going back to (Camp) Perry, Wayne never talked about retiring again."

When you visit Camp Perry, you will see many blue CA Grizzly t-shirts on the Camp Perry ranges. Many junior highpower competitors make the trip from California to Camp Perry to participate each year in the National Matches.

Connie's love for all the kids grew as she spent more summers with them. At first, the juniors had to entirely manage themselves at Camp Perry. However, the long, hot days on the range completely exhaust shooters. The kids barely had enough energy to find dinner, let alone concentrate on performance.

Connie used her skills as a mom to take stress off the juniors. She took on many jobs, improving and lending a hand wherever she could. She cooked dinner, found better on-base housing (the kids finally moved out of the 50-year-old POW huts), found cheaper plane tickets and even piloted a contract by which the team still acts. Everything she does frees the shooters and coach to focus entirely on the competition, instead of the multitude of logistical tasks.

Without needing to worry nearly so much about these tasks, the team has flourished in both size and ability. According to Connie, "Their talent has really increased over the years. It's because we were doing enough stuff right that's helping the kids concentrate on their shooting."

In the last 22 years, the California Grizzlies grew from eight to 18 members and is now one of the most successful junior teams in the history of the National Trophy Rifle Matches. In Connie's time as team mom, the Grizzlies have won dozens of national titles and continue to be the nation's most competitive junior team.

In addition to Connie's work, many parents help the team succeed at Camp Perry. Pictured here are Juniors and parents hanging out at the Camp Perry huts.

The support network that she started has expanded greatly. Many parents of past and current Grizzlies do the logistical work that Connie first took on years ago. Connie still works as a mom, taking care of her team.

To Connie, the juniors are extended family. From shooting awards and personal maturity to college graduations and job applications, Connie takes motherly pride in the team's accomplishments. Her Facebook posts are always on your front page, showcasing Hunter's personal record and Anthony's new biochemistry degree. 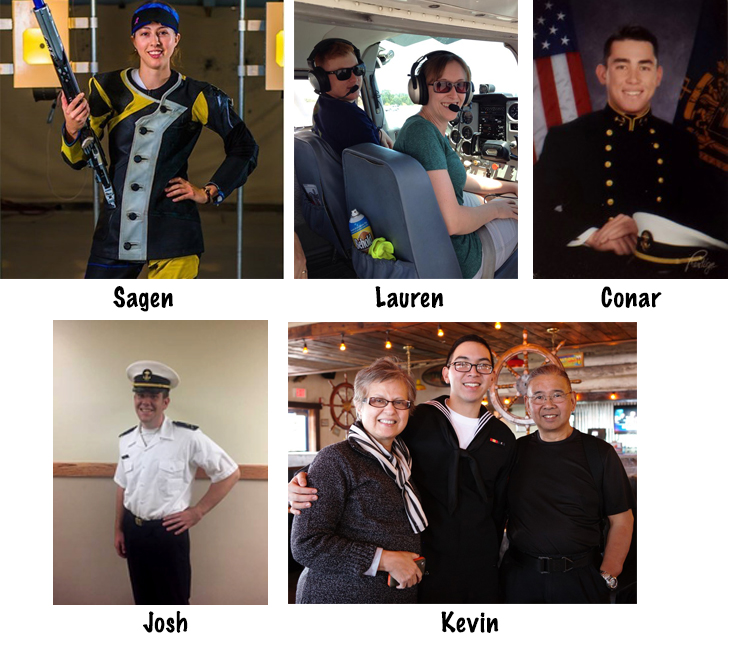 The California Grizzlies Highpower program has been a success in shaping juniors into mature adults ready to conquer great things. A few of the California Alumni's: Sagen Maddalena, now a member of the Alaska Nanooks Rifle Team and will graduate in May and has been part of Team USA for the past 3 years; Lauren White, now a pilot & flight instructor; Conar Braly, attending the United States Naval Academy in Annapolis; Josh Bick, at California Maritime Academy studying mechanical engineering as well as majoring to be a Coast Guard licensed Merchant Sailor; and Kevin Tandoc, in Nuclear program with Navy and headed to Officer Training Program.

She regularly contacts both current and former Grizzlies. She loves to chat about their lives and goals. Phone calls with her usually last an hour, which is just enough time to catch up. Connie may spend hours going through her formidable contact list, but she always gets to the entire family.

The Grizzly family includes juniors from all over California, but Connie still wants the community to expand. She encourages the team to reach out to their local communities and give good representations of safe firearm use.

In the modern political climate, especially in California, there is a lot of negative stigma about firearms. Media often portrays guns solely as weapons of mass-murder, but when people see a group of young people being responsible and successful with firearms, some of that stigma melts away. The more people are educated on how firearms work and on their safety, the less gun violence and accidents occur. Maintaining a positive public outlook on guns is the key to ensuring that Connie's hard work survives for future juniors.

The Grizzly team continues to mold kids into mature and driven people, just as they molded Robert 22 years ago. Connie's decades of hard work only streamlined and improved the program, producing many respectful, mature and skilled marksmen.

Connie's enthusiasm and dedication to the Grizzlies also continue unabated.

"I've never been prouder than when coming home from Ohio this year,” she said. “I was so proud of the whole team, in how they acted and responded. We had some more problems with the parents than we did with the kids! I already have our tickets for next year!"