At first glance, Jadelynn Kendall looks like any other air rifle competitor. She carries her equipment into the range, sets up her gear and takes the firing line, just like all of the other members of her Marion High School Army JROTC sporter rifle team. Only her second year in the sport, she’s still learning the ropes.

“I’ve always been nervous to try new things,” she said. 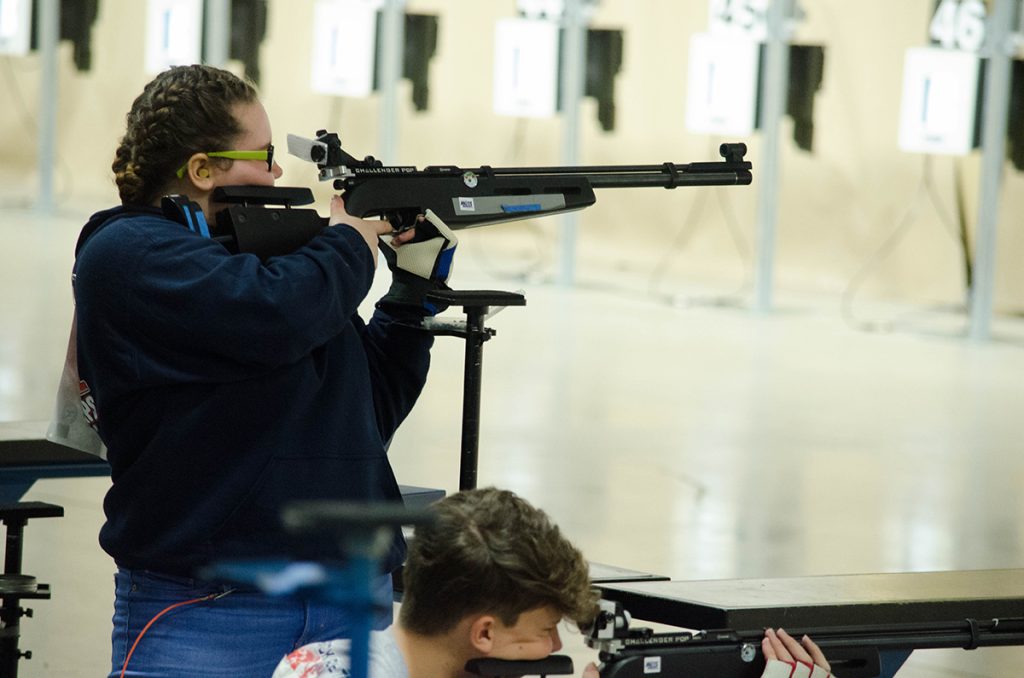 Jadelynn Kendall is a JROTC athlete with a prosthetic leg, but she doesn't let it slow her down.

Despite her fears, the 15-year-old from Indiana has come a long way. Her high school years were preceded by days of hardships and growth, but her teammates and those around her have helped to give her the confidence to stand strong – both on the leg she was born with and on the prosthetic she conceals beneath her clothing.

Because though appearing the same on the outside, Jadelynn is actually unlike anyone else. She is equipped with a powerful character that, despite being constantly given extra challenges through her disability, allows her to take on the world one step at a time.

When she was only five years old, Jadelynn's leg was damaged in a horrific accident. Doctors and nurses worked hard to save it, but they were unsuccessful. They had to amputate. The loss of part of her body and the addition of a new prosthetic leg to fill the void left young Jadelynn in a new world of both physical and emotional struggles. 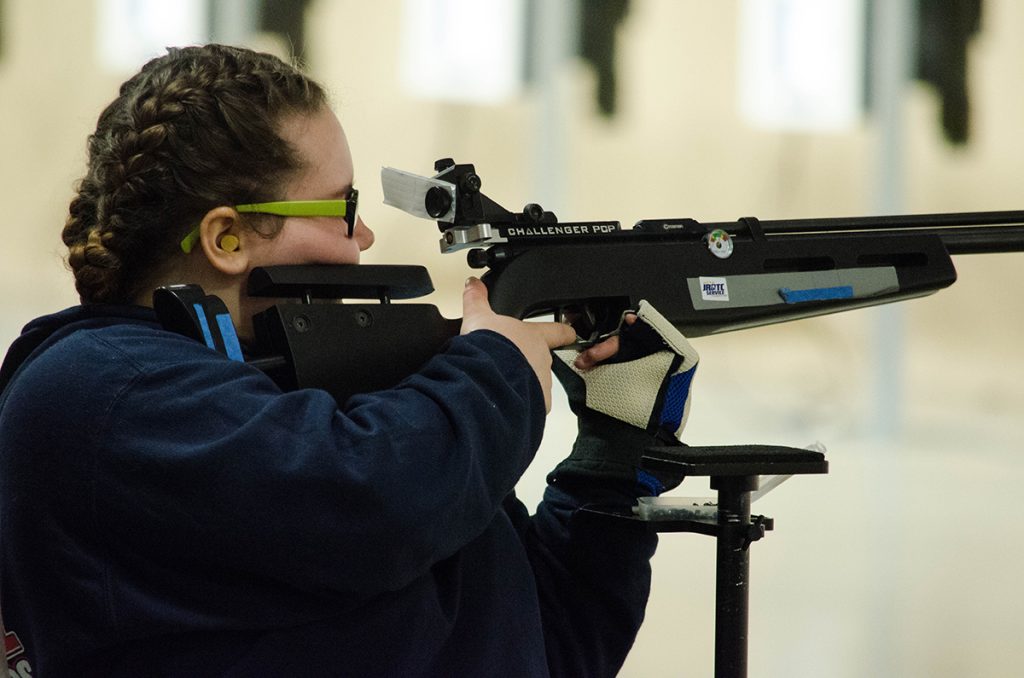 A current sporter athlete, she has interest to move onto precision and possibly even the Paralympics.

“There’s been a lot,” she said. “Most of it was relearning everything that I had already learned to do. That was hard. But once I got the hang of it, it was okay.”

“Accepting the fact that it’s not going to come back was hard too,” she admitted. “But once I accepted it, I felt a lot better.”

The acknowledgement within her mind allowed the rest of her body to move forward as well. She discovered activities she enjoyed and clung to them – refusing to let a small physical difference set her back.

She grew to love swimming and became a member of a team for a few years, where she would swim without her prosthetic. The experience taught her balance as she stood on the starting block, with only one leg, to begin a race. Jadelynn has also tried volleyball to test her athleticism.

While she worked to understand her new life, others around her had to do the same – and some cowardly refused to. Jadelynn admitted that she was bullied in school because of her prosthetic and had to move around before she discovered a school where she could be accepted. That’s when she found Marion High School.

She found encouragement there through friends and adult leaders. She is currently a member of her school choir, and she takes a Chinese class that’s led by an instructor who, according to Jadelynn, makes learning fun.

And, of course, she joined her JROTC air rifle team through a bit of happenstance and the compassion of a leader within the school who is driven to reveal the true potential of all of his students.

While out playing for Cadet Challenge, a physical fitness test for students in the program, an instructor pulled her to the side and asked her about her leg. According to Jadelynn, he said to her, “Well, why aren’t you on my marksmanship team?” She found that she didn’t really have an answer, so she listened to what he had to say. 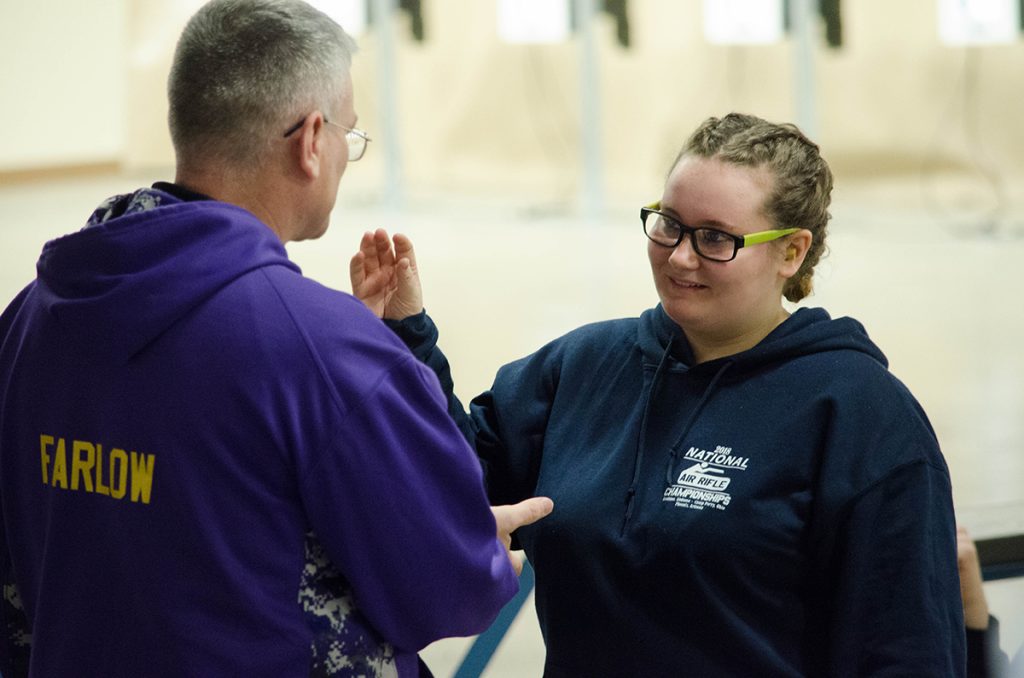 Jadelynn joined the team after being approached by coach and mentor, Lt. Col. David Farlow.

The man was Lt. Col. David Farlow – coach of the JROTC rifle team. He recognized Jadelynn’s strong disposition, and, without hesitation, knew that he wanted her courage to be a fixture on his team.

He explained their first meeting, saying, “When I mentioned it to her, she said, ‘I have a prosthetic leg,’ and I said, ‘So? Don’t let it be an excuse.’ And she took the challenge.”

He went on, “I don’t believe in limitations. Shooting is a sport that she can shoot in and do well. She can overcome the adversity that she has.”

Since then, Jadelynn has flourished as a member of the air rifle team. She has made new friends and loves traveling to different areas of the country from match to match. Now in her second year as a sporter shooter, she recently had the chance to go to Georgia for the first time and take a tour of the south – also trekking through Alabama, Tennessee and Kentucky.

“They’re really comfortable with me being around, which makes me feel more a part of the team,” she said.

Jadelynn’s newfound confidence has even made her more open to talking about her amputated leg, cracking jokes about about it with her teammates. She makes everyone laugh, trying her best to bring smiles to those around her with her humor.

“We like to think that JROTC at our school, it’s a family. And, family doesn’t necessarily always get along, but family sticks together,” said Lt. Col. Farlow. “And so, we stick together. She has a leavening affect on our team. She’s just a gentle spirit.”

Her will has allowed her to learn quickly in the three-position air rifle sport. She admits that the standing position has been difficult for her, especially with a recent knee surgery on her good leg that left her unable to perform the kneeling position during JROTC Regionals at Camp Perry in February. But, with fortitude, she still competed – firing in the standing position twice instead.

Coach Farlow explained how he stayed optimistic with Jadelynn during the match, saying, “She was really disappointed that she wasn’t going to be able to shoot in a kneeling position [at Regionals]. So I said, ‘Just beat them in the standing.’ She’s a young shooter, still developing. But, she’s a great kid.” 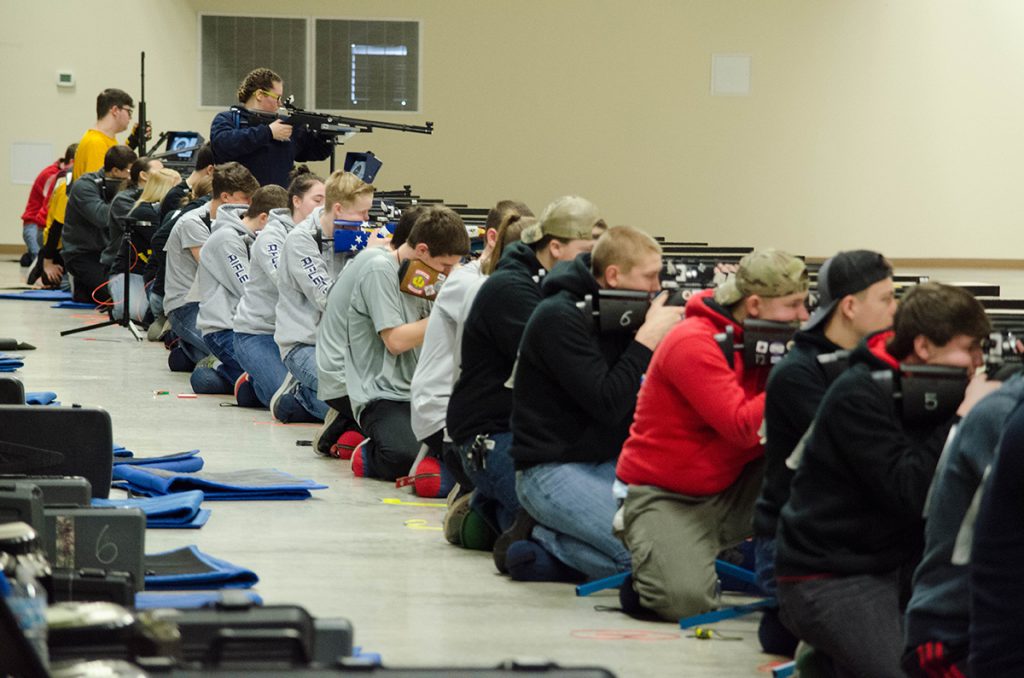 During the JROTC Service Championships at Camp Perry, Jadelynn had to shoot the standing position twice because of a recent surgery unrelated to her prosthetic.

“It takes a lot of practice to shoot,” Jadelynn said. “It’s something you really have to work at to be able to do.”

Along with intense effort and practice, Jadelynn knows a reliable coach is essential for success. With his down-to-earth rapport with his athletes and his ability to really listen to them, Jadelynn confessed that her coach is an impressive figure in her life who has helped her to reach where she is today.

“He’s so funny, and he cares about his cadets. He treats you well,” she said. “He does funny things, and it makes us laugh. He’ll always make you feel better when you’re in a bad mood.”

Farlow said he’s going to try to move her into precision next year, when she’s a junior. If she likes it, she can keep moving up in her abilities and maybe even one day join the Paralympics.

“There are opportunities for her,” he said.

“I’m thinking about it,” Jadelynn said as she laughed.

Though she has struggled in her life from an early age, Jadelynn has found the strength to stand and to not let unfortunate circumstances keep her down. She has set an example for others who may also have an ailment by showing them that with a little bravery and the determination to get the most out of life, anything is possible. And, along with perseverance, having a strong community around you is just as important.

“My friends and family – they’re amazing, and they help me,” she said. “You don’t know what you can do until you try it, and just because you have a disability, you shouldn’t just not try it. You should try it and see if you like it.” 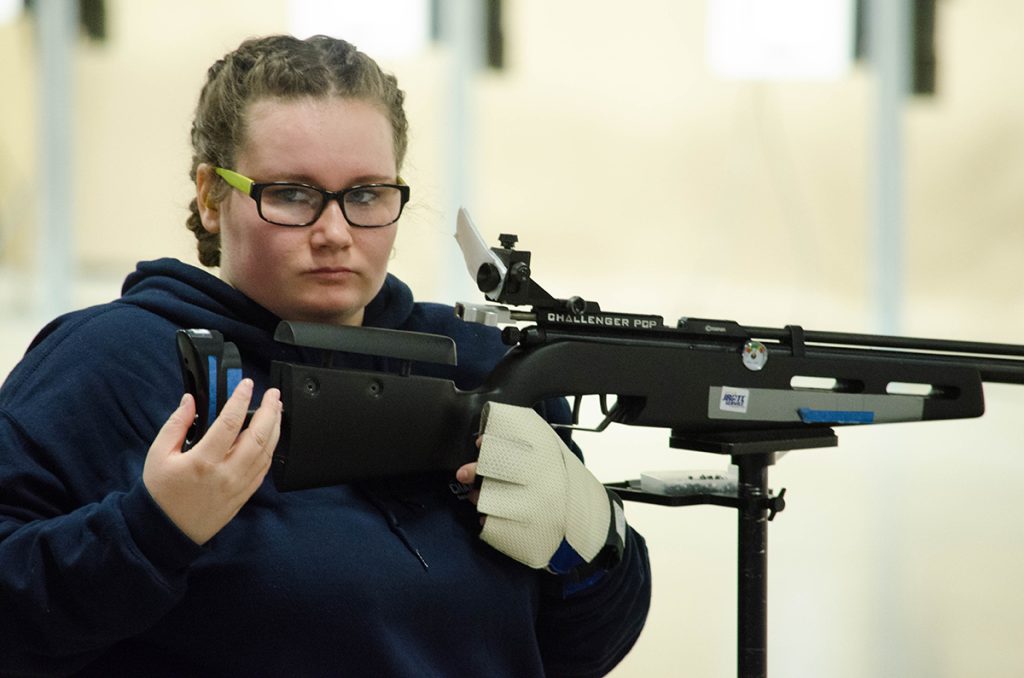 Farlow said of his remarkable athlete, “She has the spirit of a champion. She doesn’t let anything bother her. She’s very hard working, and she’s the most pleasant young lady. She’s just a joy to have on the team.”

As for her future, Jadelynn will try to keep up with her shooting career, but what she’s really passionate about is going to college to learn more about prosthetics. With her personal experiences and resilience, she wants to be able to provide others in her situation with everything her prosthetic has given her since she was five years old – support.