CAMP PERRY, OH – In disappointing fashion to all involved, the CMP had no choice but to cancel its June 17 Excellence-In-Competition match when significant damage was done to the target system following the successful completion of standing and rapid-fire sitting stages at 200 yards by nearly 100 competitors. 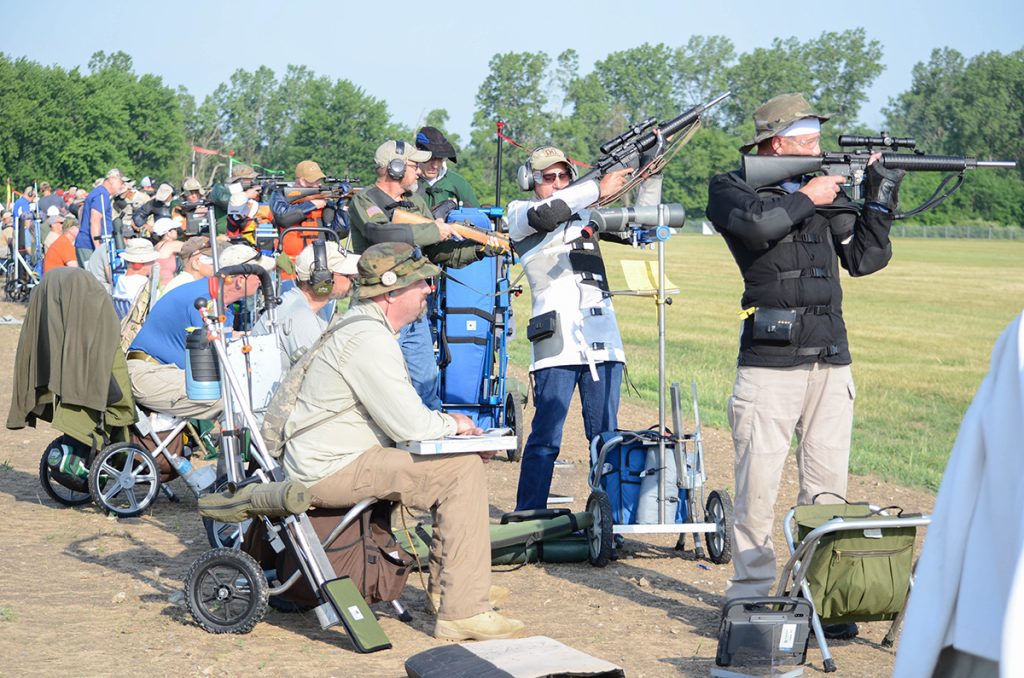 Nearly 100 competitors took to the firing line on Viale Range for Saturday’s EIC Rifle Match. All three relays of 200-yard firing including standing slow-fire and sitting rapid-fire went off without a hitch on CMP’s electronic targets.

The match fired on Viale Range was a fill-in for a previously cancelled Ohio Rifle & Pistol Association event. The CMP EIC match was the historic debut of the latest in scoring technology on the “big” ranges at the 101-year-old Ohio National Guard training site near Port Clinton. CMP is in its second year of operating 10 electronic target lanes at 100 yards for rifle and five lanes for pistol at Camp Perry’s Petrarca Range. CMP also operates two 80-point electronic indoor airgun ranges at Camp Perry and Anniston, AL, respectively.

During the changeover from 200 to 300 yards at the Saturday event, multiple targets were damaged when newly-trained CMP target workers accidentally strained or tore several interconnecting cables on the target line while raising and lowering target carriers. Diagnostics showed several targets were showing errors, but CMP technicians believed many targets could be salvaged and some were repaired. 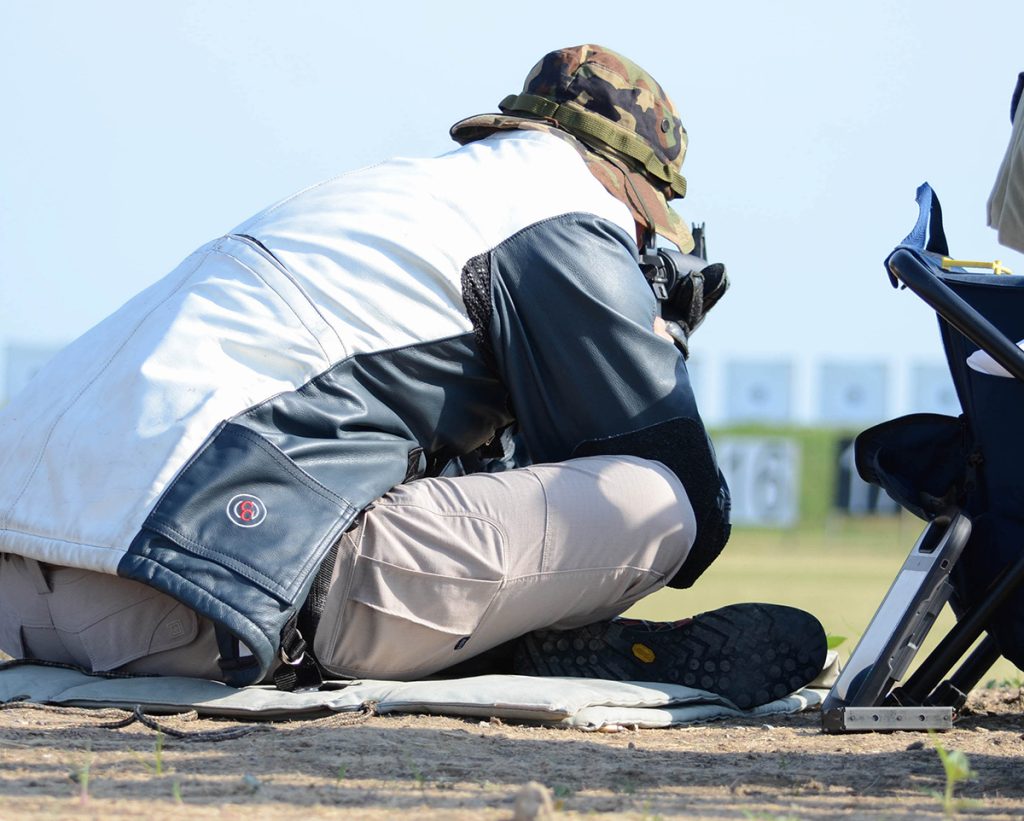 A rapid-fire competitor sends one of 10 rounds downrange in the sitting stage of the June 17 EIC Rifle Match.

The loss cut the range from 35 to 19 serviceable targets. CMP staff and competitors agreed to shrink the size of the range, re-squadding shooters into more relays on the remaining working targets. After repairs were made, firing continued with the prone rapid-fire stage at 300 yards.  When firing was complete, a handful of shooters received inconsistent information on their monitors.  A re-fire was conducted for that group and many of the re-fire group still reported target errors. 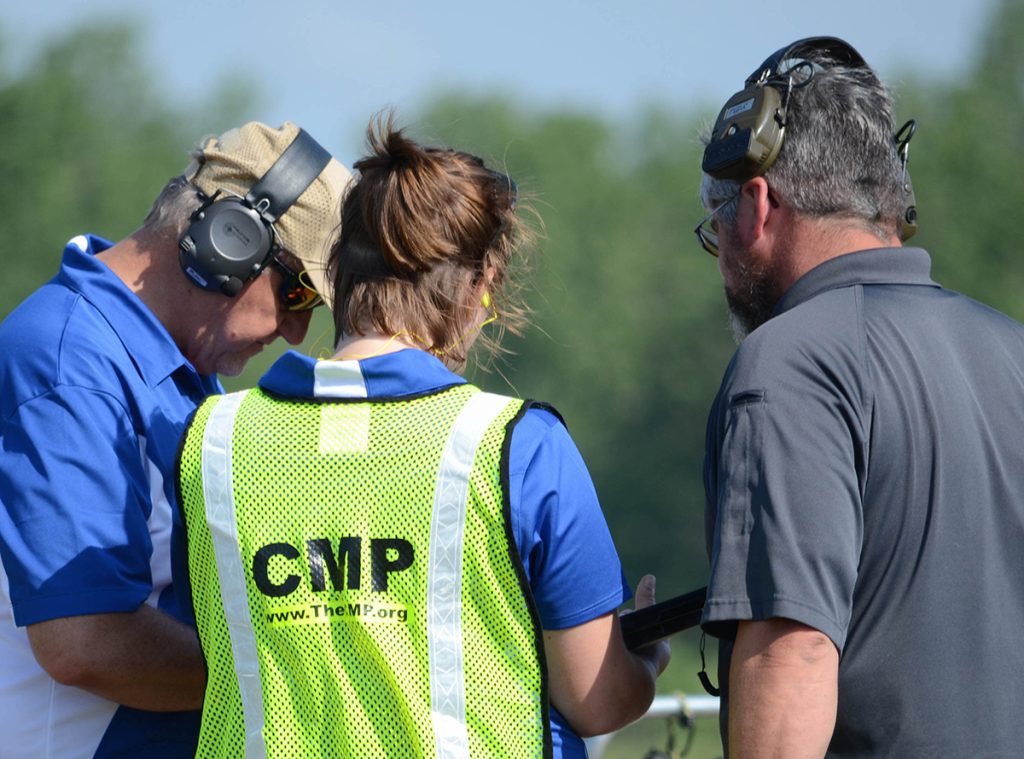 Members of CMP firing line and targets staff convene to discuss abnormalities during the 300-yard prone rapid-fire stage of the EIC Rifle Match. Moments later, the match was called off after it was determined too many targets were compromised by damaged cables in the Viale Range pits.

It became clear that the initial damage to the target communication system was worse than originally thought. Christie Sewell, CMP Programs Chief, explained to competitors that it was impractical to go any further and had no choice but to cancel the match. CMP offered refunds to all competitors or the option of crediting their entry fees to a future match.  The match did not count toward the competitors’ EIC match total for 2017.

They say it’s easy to recognize pioneers – they’re the ones with arrows in their backs. It feels that way sometimes at the Civilian Marksmanship Program as we roll out the most sophisticated electronically-scored targets in the world to America’s bullseye rifle and pistol shooters. Sometimes we make mistakes and they cost us time, money and aggravation. 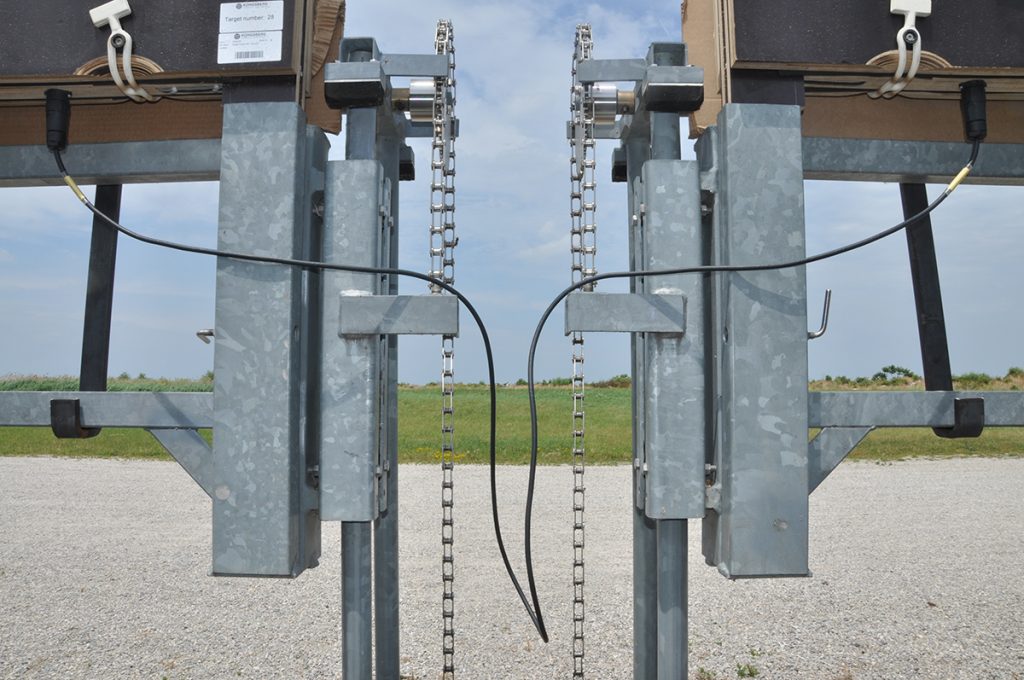 Cables carry power and communications from target to target the length of the line. There are many places between targets that can trap and catch cables. The loss of one cable can take out five adjacent targets.

But we press on. And the competitors who understand our goals press on with us. We pull the arrows out of each other’s backs, cover shot holes with thick-skin pasters, learn from our mistakes and press on with our mission. That mission includes safety instruction, youth marksmanship fundamentals, growing the sport of bullseye target shooting and providing our competitors the best opportunity to maximize participation in this sport.

What Actually Went Wrong on Saturday

Those familiar with the KTS targets at the CMP Talladega Marksmanship Park know they are hard-wired and mounted to actuators that tilt the targets up and down for use on three different target lines. Shooters fire from a common covered firing line and fire distances of 200, 300 or 600 yards during open public sessions and matches without moving. Those targets are semi-permanent and fit into frames that are bolted to iron brackets mounted on a concrete deck. It’s a range unlike any other public range in the U.S.

In fact, the Kongsberg Target System targets at Talladega were not designed to be laid horizontally when not in use. They were also not made to fit into pit-served target carriers like those at Camp Perry. These targets were originally designed to stand upright 100 percent of the time. Conventional thinking is, if you want multiple distance targets, build multiple ranges. 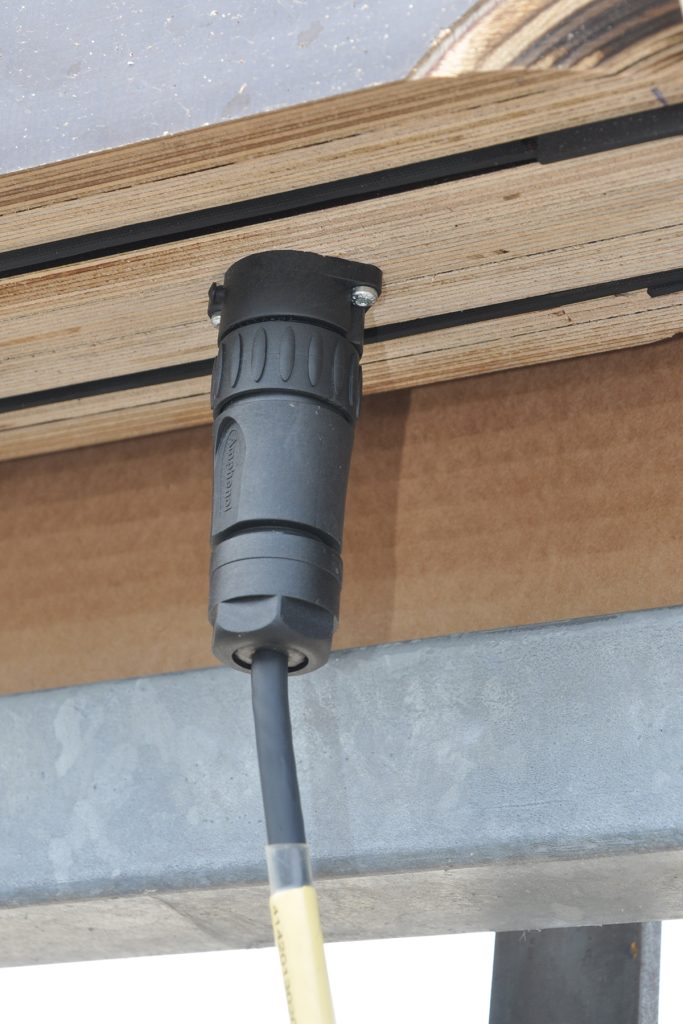 Cable connectors screw into a cable base and wire continues to the bottom center of each target to a circuit board.

But CMP has pushed KTS into “Americanizing” their target systems – making them more robust and more flexible. We have taken these same static targets on the road and reassembled them onsite in Arizona, Oklahoma, N. Carolina, Vermont and other demonstration sites.  The targets we just fired on at Camp Perry were used at Oklahoma and Camp Butner with wireless monitors and WIFI communication for the first time. With every road trip, we find ways to expand the limitations of the system and KTS is with us in stride, updating and upgrading hardware and software to accommodate our needs.

For the first time, and in anticipation of installing KTS electronic targets across the spectrum of ranges at Camp Perry in 2019, CMP installed a set of electronic targets to fit into the target carriers on Viale Range. The wood 2x4 uprights which normally hold cardboard target backers were removed to make room for the KTS target frames. The e-targets were locked in and pinned in place to limit movement and to protect vulnerable electronics below the berm wall. We knew the connecting cables would need considerable care during transitions and we shared that with the young and exuberant range crew. Unfortunately in their minds speed and efficiency was a priority over care for the cables and the obvious occurred. 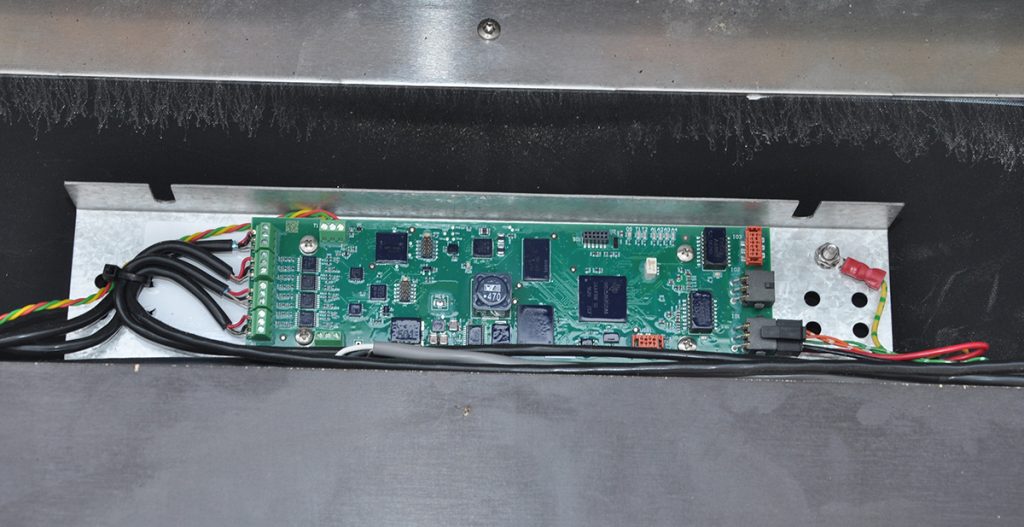 The circuit board handles all the calculations of shot location, XY coordinates on the target, temperature of the sound chamber, shot value and much more.

Each target contains a circuit board at its base and four acoustic sensors in the target’s four corners. Multi-conductor cables carry low voltage and communications information from target to target. All the bullet impact information sensed by the targets is communicated wirelessly via WIFI to monitors on the firing line. The targets are wired in clusters of five – “daisy-chained” the length of the target line.

On June 17, at 300 yards our freshly-oriented summer range crew, some of whom are accustomed to speedily pasting and putting paper targets back into the air, got a wake-up call. Because the targets are heavy, they must be mounted in the “up” position, which takes away the normally easy servicing of pit-pulled targets. 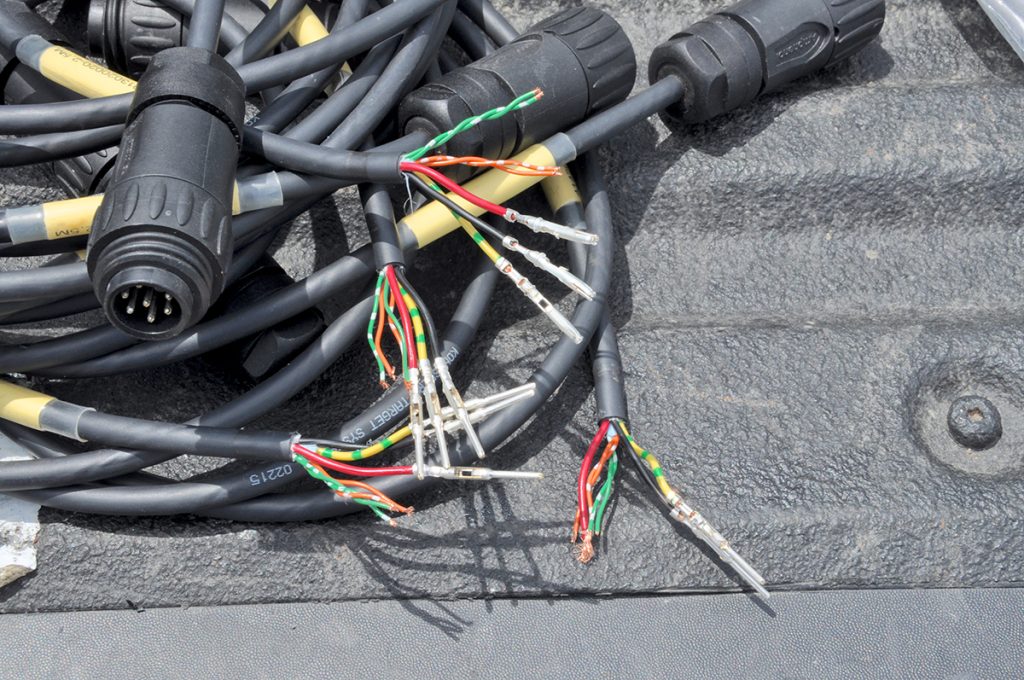 Some of the cables that experience damage during the match. In most cases the entire cable and pins were pulled out of the screw-in connectors.

The crew planned to use ladders to change target faces on transitions from 200 to 300 and 300 to 600 yards during the match. However, when the ladders proved to be cumbersome and too slow, the crew opted to un-pin, lower and re-face the targets and send them back up. During that maintenance period, many of the cables got caught on frames and other obstacles and were either torn from connectors or the connectors and wiring were pulled from the circuit boards.

It was a truly catastrophic failure, but not a failure of the target system itself. The targets and WIFI functioned flawlessly during the 200-yard stage, where nearly 100 competitors fired three relays of standing slow-fire and three relays of sitting rapid-fire with no errors in just over 45 minutes. 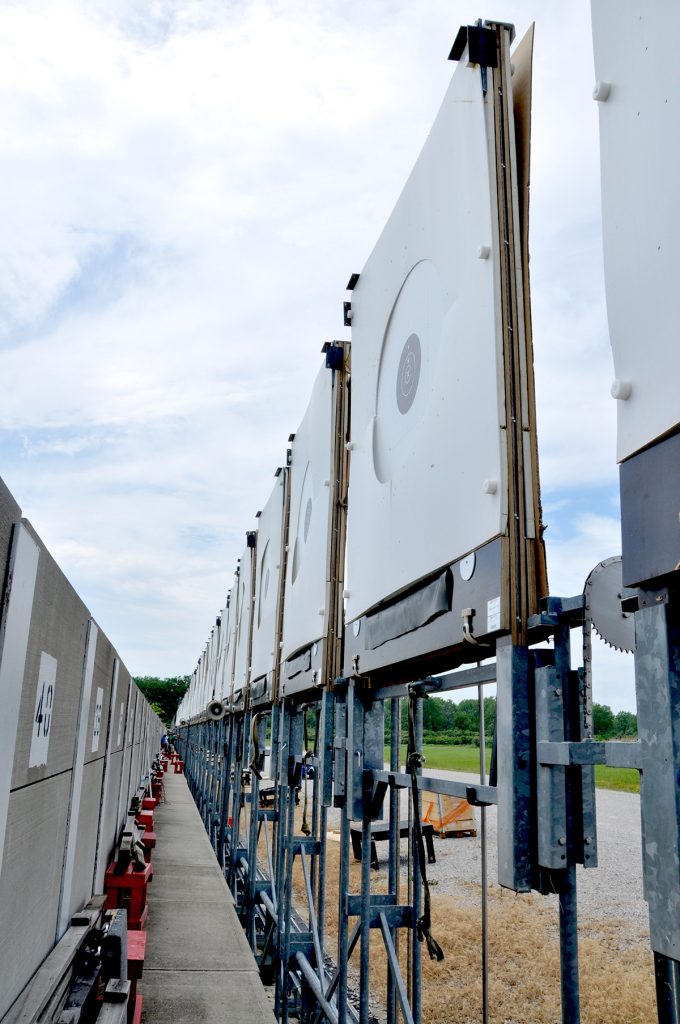 Targets in place in the Viale Range pits without cables connected.

It was a difficult learning lesson for the crew and CMP management. In a post-match review, it was determined that 1) the crew was a bit overzealous in its desire to quickly raise and lower the targets to get them ready for the 300-yard stage, 2) had the cables been longer and/or handled with care, damage could have been completely avoided, 3) a better procedure needs to be developed to gain access to the target replacement centers without putting the crew or target equipment in harm’s way, and lastly, there was too little preparation time on an active rifle range to setup and practice target maintenance.

CMP management and staff completely empathize with our competitors. Many traveled and spent money to shoot a match that was not successfully completed. It was heartening to hear many competitors tell us not to refund their match fees, but to instead invest it in making the process better.  In the process of showcasing electronic targets, it was lack of preparation and human error and NOT the performance of the target system that stopped this EIC match in its tracks.

As pioneers in this sport, the CMP has learned from these mistakes and we will repair and reinstall this same set of targets at Camp Perry. The time savings, decrease in competitor fatigue, efficiencies of processing large amounts of data and moving large numbers of people effectively during our matches all make the KTS system the model that makes sense for our sport’s future in our opinion. It’s clear the vast majority of competitors like the system and want it to succeed.

We thank those who see the big picture and look forward to sharing our successes with our competitors in 2017. We fully intend to fire the 2019 matches on KTS targets on Viale and Rodriguez Ranges at Camp Perry with great success.