How to Alienate (Potential) Allies and Make Enemies

From the Virginia Legislative Action Group  of The Liberal Gun Club

You may or may not have heard, but The Liberal Gun Club does outreach to state legislators from time to time, when there is topical legislation to discuss and where we have local folks that are willing to put in the time and effort to do so. We even bring Honor to the state capital! 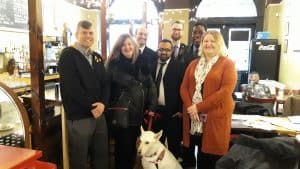 And Honor was a very good boy.

Below is a letter outlining one members recent experience doing outreach, and how outside events can make a huge negative impact on those discussions.

On Friday the 24th, we went to Richmond to talk with our state legislators. One of our members had an impromptu meeting with a legislative assistant. Earlier that morning someone made a death threat to the legislator most likely because of their stance on gun control. This ruined his meeting as the legislative assistant was obviously no longer in a good place to have a discussion regarding gun rights. There is never an acceptable reason to threaten someone. Ever.

Keep in mind that 4 days earlier there was a massive gun rights rally attended by a substantial number of folks with rifles and plate carriers. We got comments from the people we visited that they loved how we came only armed with leave behind documents and camera phones. We didn’t yell, glower or threaten. We answered questions and clearly stated where we stood and often how we came to favor gun owners rights and root cause mitigation. Building rapport takes time, effort and a willingness to take risks. One idiot lashing out can not only destroy the efforts that we are making but make it that much harder in the future.

It’s not about “optics” it’s about creating a space where politicians and their staff can safely lower their shield and be a little vulnerable. That Democrats own guns is probably a revelation to some. That we oppose useless and discriminatory laws related to guns is news to most.  There are many well meaning people in the Democratic Party that dislike gun ownership and by extension gun owners. Many gun owners don’t help. For years many gun rights activists have done nothing positive to change this dynamic and some indeed, make it far worse. We will make this change but only by listening and actively addressing their concerns.

If you are a left of center gun owner join us.  If you are not, get active the same way we did: Do the research, dress well and make meetings with your representatives.  Listen to them and address their concerns. Ask questions and let them paint themselves into a corner. Whatever you do don’t make threats.  Ever.