Homophobia, Transphobia, and Body Shaming are Bad; or How Not to Be an Asshole

We’ve been having some spirited discussions in our forums, recently around the rally in Virginia. We didn’t attend. We prefer our activism through other channels, but that’s a discussion for another time. A troubling thing came from remarks on photos. Remarks made by “liberals” that seemed, shall we say, less than “progressive” in spirit.

Someone once said “what you call being politically correct, I call just not being an asshole.”

Use the right pronouns.

Celebrate the human body in all its diversity.

End the slut shaming and the fat shaming. Its hurtful, and has no place in civilized discourse. These are embedded “progressive” values.  In short, don’t be a jerk. Its anathema, at least in liberal circles to call someone a “ho**” or a “tr**y” or to use the “N” word.

Which of course, only applies if we agree politically, apparently.

Why is it acceptable to call someone an “ammosexual” when it clearly invokes “homosexual is bad” by making it a slur? What part of your brain makes sexual slurs acceptable and invoking homophobia when it comes to a gun owner?

(Protip, check this auto correct, even spellcheck thinks that’s what you mean)

Funny that. Why is it appropriate to comment on a gun owners genitalia, specifically penises when we see pictures like this? Is it now “ok” to deride trans folks? Or just in this instance because there is a gun? 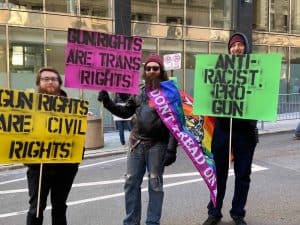 Or if people of colour show up armed, suddenly they are “gang-bangers”?

Or body shaming folks with some extra girth as “fatties”?

(I assume you have seen the picture of the less than “fit” folks with guns at this and other rallies, I don’t need to post them)

We don’t do marches or rallies, and its clear that some of the participants don’t respect boundaries, or propriety. The 2a community is rife with racists, -phobes (or all stripes) and some otherwise not nice people. But when did that becomes an excuse to use language rooted in homophobia, transphobia and racism? When did the political left decide that those slurs are just fine?

If your go to argument when deriding protesters  is entirely ad hominem attacks rooted in fear and racism, maybe you need a better argument.

Do better. Racism is bad. Homophobia is bad. Body shaming is bad. Be the change you want to see in the world. Find other invective if you need to use invective. It’s not a good look. and it’s not “just a joke.”

I like “asshole” personally. Its widely applicable. There are others, I am sure you have a dictionary and a thesaurus. It’s not hard to find alternatives.

Don’t be an asshole.