CAMP PERRY, Ohio – The Civilian Marksmanship Program (CMP) is proud to announce the lineup for the 2018 First Shot Ceremony, set to take place Monday, July 9, at the Camp Perry National Guard Training Facility, near Port Clinton, Ohio. The ceremony will begin at 10:00 a.m. on the base’s Rodriguez Range and is free and open to the public. All ages are welcome to come and witness the parade of historical vehicles, aircraft and pyrotechnics that pay homage to history while also spectacularly initiating the 2018 National Matches season.

The First Shot Ceremony serves as a greeting event for guests, participants, volunteers and staff conducting the 2018 National Matches at Camp Perry, which feature the finest pistol and rifle shooters in America. 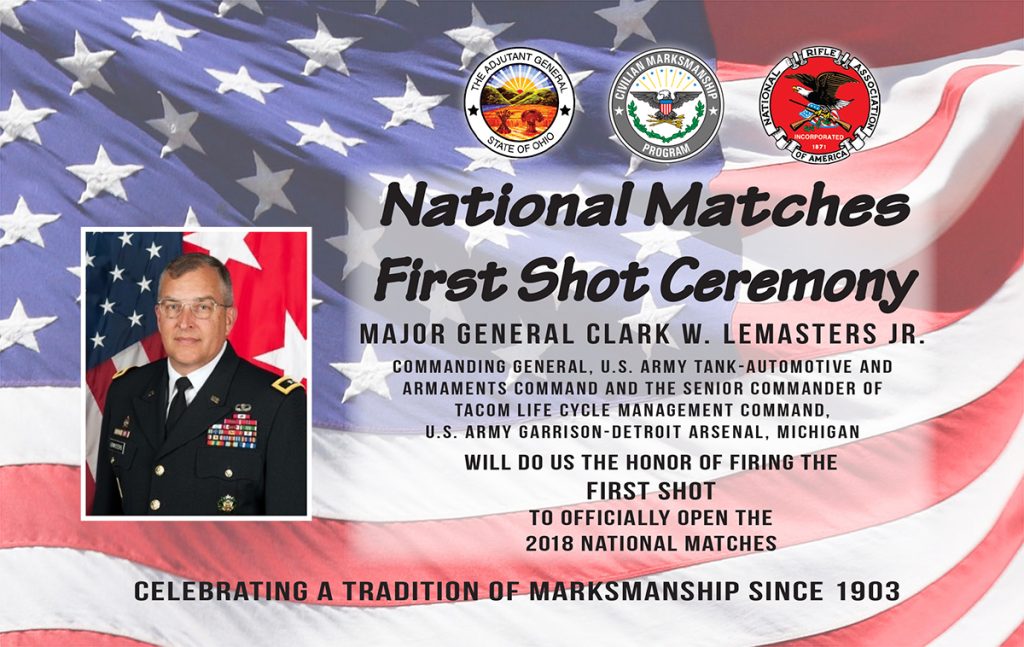 The National Trophy Pistol and Rifle Matches have assembled talented marksmen and women at the Camp Perry National Guard Training Facility since 1907. The first CMP National Matches of the 2018 season will fire on July 14, beginning with the pistol competitions, and will conclude on August 8, following CMP’s new Long Range matches. Several other pistol, rifle and air gun competitions and clinics are scheduled throughout the National Matches to accommodate the thousands of visitors expected to participate in the annual event. 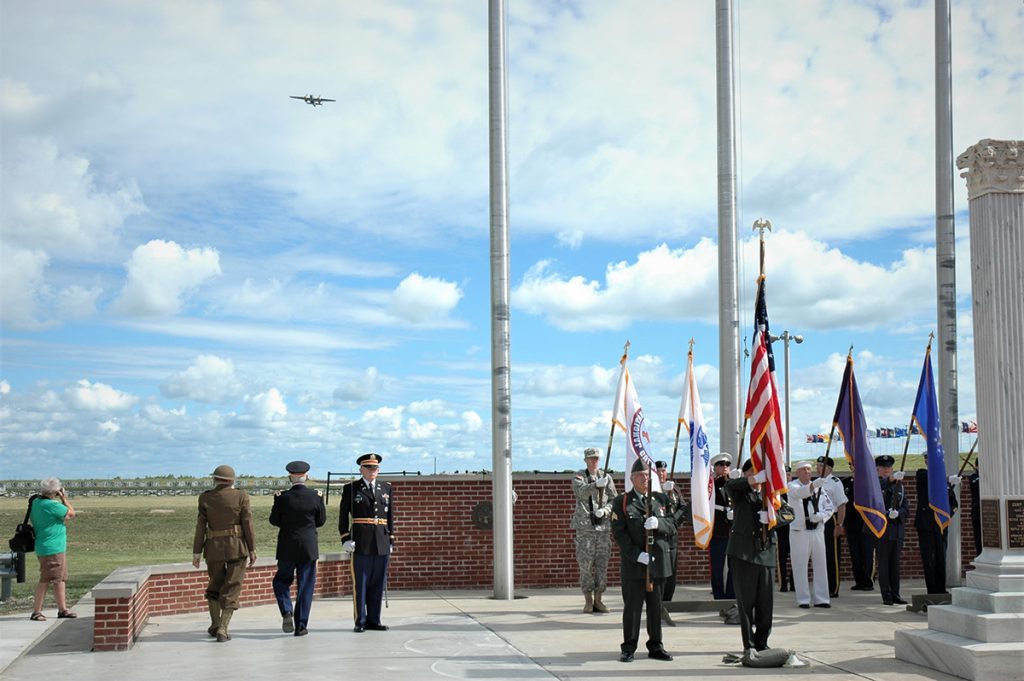 Along with distinguished guests, the ceremony will include visual representations of America’s past through authentic WWII aircraft and other historic vehicles.

At this year’s First Shot celebration, the CMP is honored to include former U.S. Army Golden Knights skydiver, SFC (R) Dana Bowman. SFC Bowman lost both of his legs in 1994 after a collision incident during the annual Golden Knights training in Yuma, Ariz., that also took the life of one of his teammates. A story of triumph and inspiration, SFC Bowman became the first double amputee to re-enlist in the United States Army later that year.

Additionally, breathtaking flyovers from a fully-restored World War II U.S. Navy TBM Avenger torpedo bomber and Georgie’s Gal, a B-25 medium range bomber, will graze the skies above – both housed at the Liberty Aviation Museum in Port Clinton. (All aviation appearances are subject to favorable weather and mechanical conditions. Vehicle traffic near the First Shot grounds will be re-routed to allow use of the street for our presentation.)

An exciting addition to the 2018 schedule, the Ohio National Guard invites all attendees to a ribbon cutting at the reconditioned Hough Auditorium at the conclusion of the First Shot events. Be the first to see the stunning restoration of the theater that has housed incredible individuals since its beginnings in 1938, including some of the greatest American marksmen in history and famous entertainers like the incomparable Bob Hope. The new theater pays homage to its past through its renovations, while also incorporating innovations that will accommodate guests for years to come.

No dress code is required for the First Shot event, but all ceremonial activities will take place outdoors, so please dress appropriately for weather. Spectator seating will be set up alongside Rodriguez Range, with additional bleachers placed diagonally on Lawrence Road in front of the Plaza, where the ceremony will take place. Roads will be blocked to keep traffic away in the area immediately surrounding the Shooters’ Plaza, with ample parking available around Camp Perry. 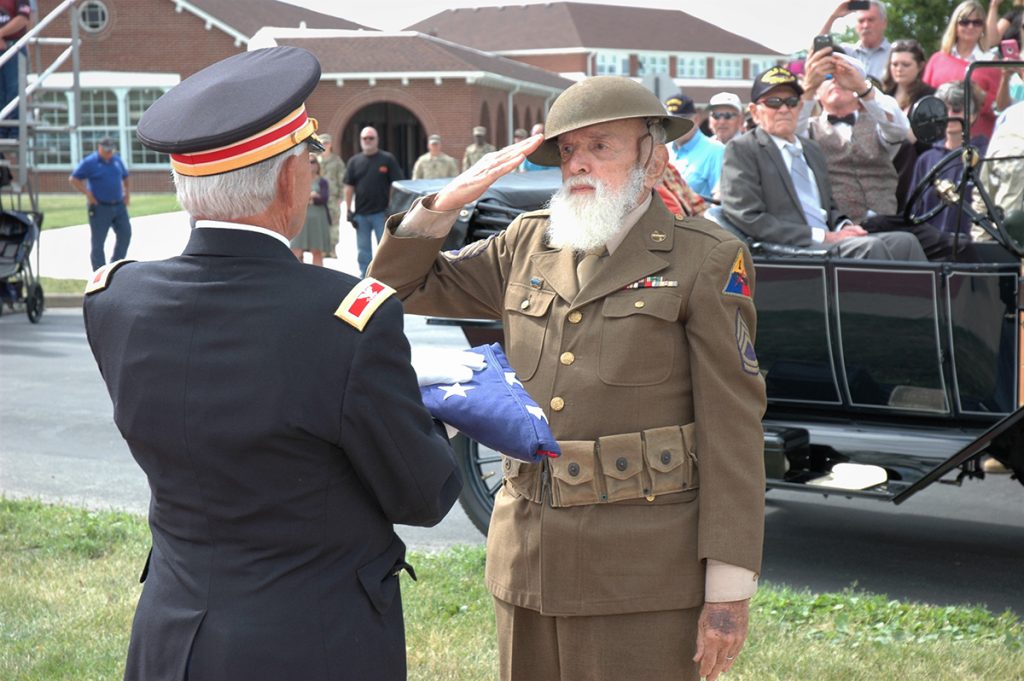 The First Shot Ceremony not only officially begins the National Matches, but also honors past and present military members.

When all of the ceremony festivities are over, guests are invited to step foot onto Petrarca Range, right next to Rodriguez Range, which features CMP Electronic Targets. The targets can accommodate both pistol and rifle shooting, using some of the latest technology, to instantly display scores on LED monitors beside each marksman.

Also, guests are welcome to take a short walk over to the CMP’s indoor air rifle range at the Gary Anderson CMP Competition Center, beside Petrarca Range, to gaze upon authentic Olympic and other memorabilia from the notable career of American marksman, Gary Anderson. The facility also includes an 80-point electronic air gun range that will be open to the public periodically throughout the National Matches.

The CMP has many memorable events to see! We hope you will join us for another thrilling season of National Match competition! For more information about the National Matches, visit http://thecmp.org/competitions/cmp-national-matches/.

About the 2018 First Shot Speaker:

During his esteemed career, Maj. Gen. Clark W. LeMasters, Jr., has served in Germany, Iraq, Qatar and Afghanistan. In 1982, he was commissioned as a second lieutenant through the Reserve Officers Training Corps program at Marion Military Institute, Marion, Ala. Following graduation, he served as a Platoon Leader in the 1-115thInfantry Battalion, Maryland Army National Guard, until the completion of his Bachelor’s degree in Chemistry at Frostburg State University in Maryland. The general also has Master’s degrees from the Florida Institute of Technology and the Army War College.

His awards and decorations include the Army Distinguished Service Medal with one oak lead cluster, Legion of Merit with three oak leaf clusters, Bronze Star Medal with one oak leaf cluster, among others. The general has also operated under many previous assignments, such as Deputy Chief of Staff of Operations and Logistics, Commanding General of the 13thSustainment Command, along with a dozen other duties.