CAMP PERRY, Ohio – Thanks to the generosity of GLOCK, Inc., truly ANYONE will now have the opportunity to compete in the inaugural GLOCK Sport Shooting Foundation (GSSF) Camp Perry National Challenge event, scheduled for July 1 at Camp Perry during the 2017 National Pistol Matches. 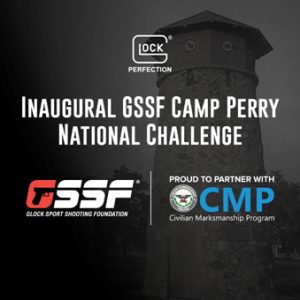 In order to encourage even more participation and to promote competitive shooting, GLOCK has offered to bring extra pistols to the National Matches to be used by those who may not have access to a pistol but are interested in competing in the match.

Though free to use, those who borrow pistols will still need to purchase their own 9 MM ammo to fire in the National Challenge match, which can be purchased at the CMP Store for $15 or on the range during the competition. Participants may sign up to fire in multiple relays, so be sure to buy the appropriate amount of ammo!

Other important notes about the GLOCK National Challenge Match, which is open to both adults and juniors of all skill levels, include:

The GSSF Camp Perry National Challenge will fire in two different categories, Stock and Unlimited, and will be set at distances of 5, 7, 10, 15 and 25 yards – with 10 rounds each in a time limit of 15 seconds. Competitors must have a GLOCK Membership in order to compete in the event. Plaques will be awarded, along with six pistols reserved for category winners (Overall, High Junior, etc.).

For more information on requirements for the Stock and Unlimited classes, read the match press release on the CMP’s Communications page at http://thecmp.org/cmp-announces-new-glock-pistol-match-for-2017-national-match-schedule/.

To register for a GSSF Membership, visit http://www.gssfonline.com/registration.cfm or join during match registration at National Match check in.

The post GLOCK Offers Pistols Free for Use During Inaugural Match at Camp Perry in July appeared first on Civilian Marksmanship Program.