CAMP BUTNER, N.C. – On a beautiful, sunny morning in North Carolina, over 40 bright-eyed students of all ages set foot on the grounds of Camp Butner Training Facility to take part in a century-old tradition that has trained thousands of new marksmen around the country – the Small Arms Firing School (SAFS). The class was held during the Civilian Marksmanship Program’s (CMP) Eastern Travel Games at the end of April. 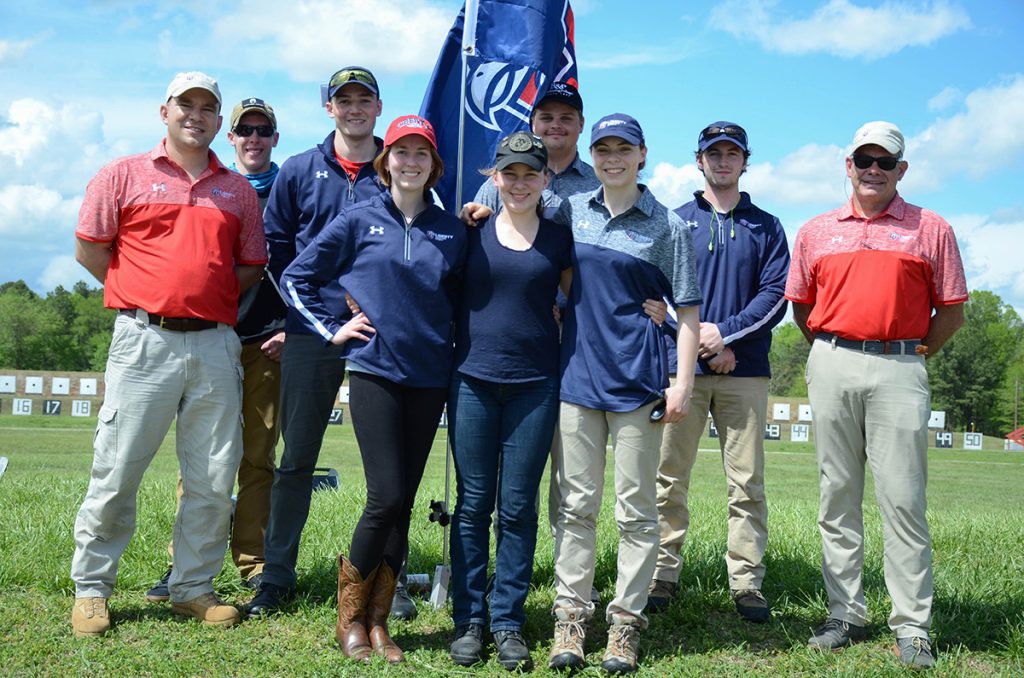 Among the crowd were the eager student-athletes of Liberty University – a private institution located in Lynchburg, Va. The school is in the beginning stages of building a shooting sports tradition for its students, introducing this year a brand new program with 65 members of four different disciplines of club teams: rifle, pistol, shotgun and three-gun.

Competitor experience levels of the current Liberty University Flames and Lady Flames rifle team are all over the board, with some accomplished riflemen, while others were competing in their first M16 rifle competition during the SAFS course.

The course is a combination of classroom education and hands-on fundamental, competition and safety instruction on the firing line. At the conclusion, students fire a true M16 rifle match, with the chance to receive Excellence-in-Competition (EIC) points towards earning a Distinguished Rifleman Badge – a prestigious achievement. All equipment is provided by the CMP, with participants only needing a willingness to learn in order to attend. 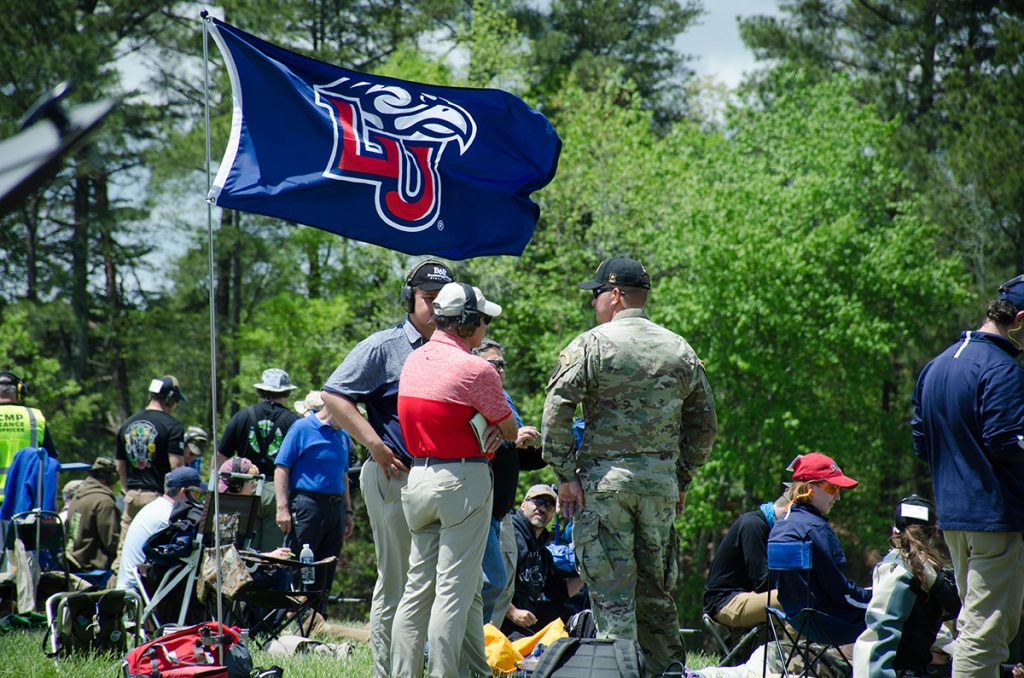 The Liberty University flag flew high behind the line – letting everyone know they were there and ready to work. The school recently built a full firearm range near campus that will be open to both students and the public.

This year, the CMP was fortunate enough to have the talented members of the U.S. Army Marksmanship Unit (AMU) train students on the line.

Displaying the type of talent being cultivated at Liberty, Susie Krupp, a sophomore athlete on the Lady Flames team, was the High Non-Distinguished competitor of the event overall, earning her introductory EIC points.

Executive director and head coach of the Liberty University shooting sports program, Dave Hartman, was impressed by the SAFS event and grateful for the education his new team was able to receive. The university is already looking forward to next year’s Eastern Games and hoping to return with other area scholastic teams to encourage even more young athletes to learn marksmanship fundamentals and safety. 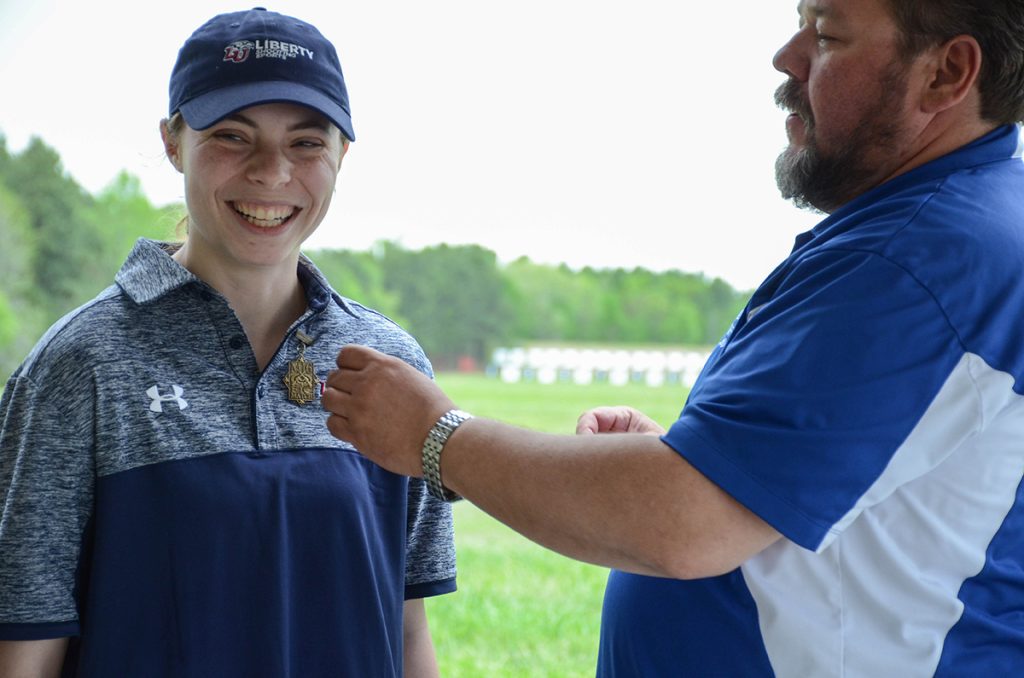 Susie Krupp, a sophomore, was the overall High Non-Distinguished competitor of the M16 match.

“What’s beautiful about this event is that our competitors can come to this event without any prior knowledge, they don’t need to have a rifle,” he said. “They go through the classroom portion, and they learn a vast amount of information. And having the AMU here was fantastic.”

As members of the Association of College Unions International (ACUI), the Liberty program began with the shotgun team, which competed the most in its inaugural season and showed promising success. 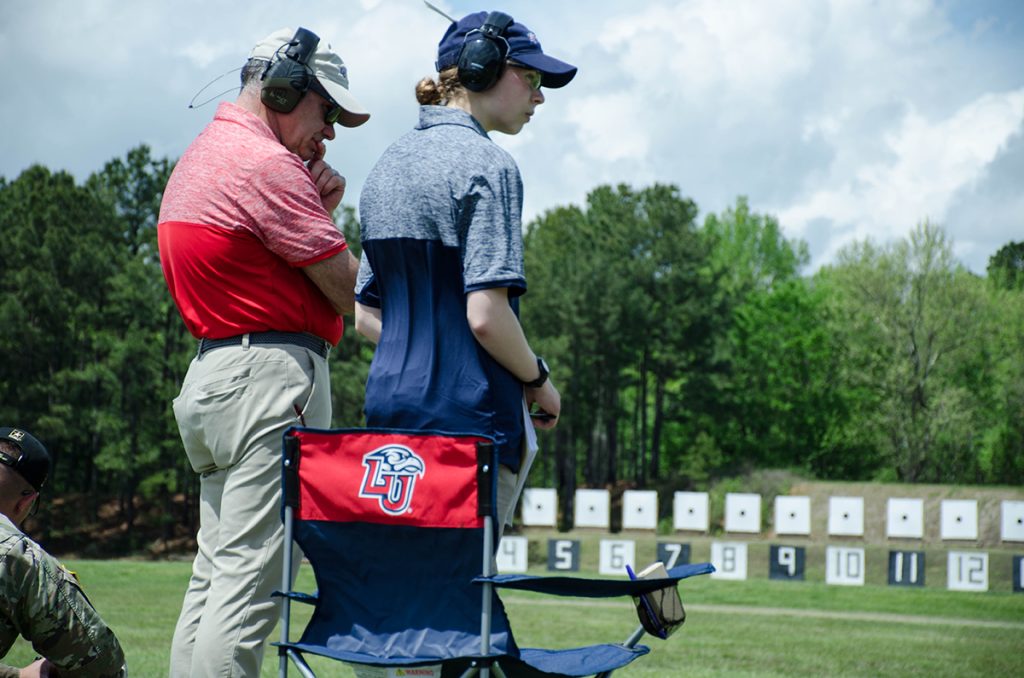 Head coach David Hartman (in red) is excited for the future of his team, saying, “We’re enjoying what we’re doing.”

Hartman is delighted in the accomplishments of his green team, saying, “For just getting started, it’s pretty phenomenal.”

Hartman, who helped start a youth shooting team in Spokane, Wash., and coached its members (including his son, Tommy) to a National Title in 2015, is familiar with the shotgun and long-range disciplines. But when it came to rifle, Hartman admitted he needed a little help.

That’s when he invited in assistant coach Richard Mast, who has long had a professional relationship with Liberty University and has always been attracted to the marksmanship world. 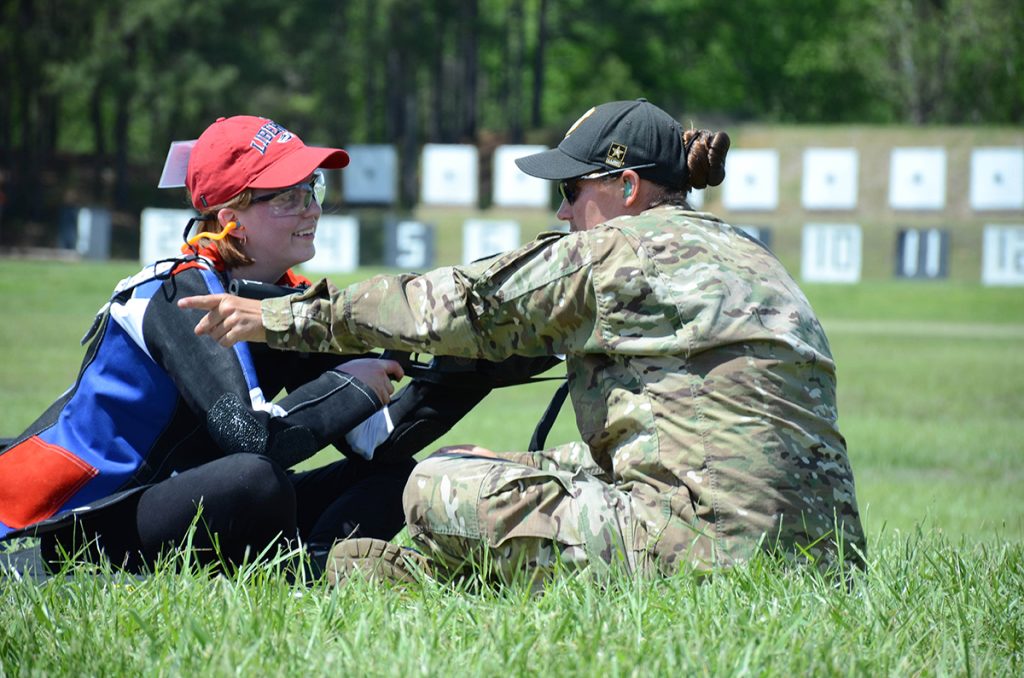 The athletes of Liberty University were trained by talented members of the Army Marksmanship Unit.

“Shooting has been something that I have always enjoyed and have enjoyed passing on to kids,” said Mast. “I always wanted to do it as a kid and didn’t have opportunities until I got older, so I’m helping to give back by helping kids, young adults with something that’s a good sport. And, it’s good competition and good clean fun.”

Mast suggested to Hartman that it would be good for the rifle team to be able to shoot both smallbore and highpower, since the two classifications work well together. After having traveled to Eastern Games for the first time last year to take the SAFS course himself, and even going on to win the M16 match, Mast liked the close location of the event and suggested the team take the course as well. Hartman agreed.

“I’m very thankful to the CMP to be able to do this. It helps our team long-term, absolutely,” Hartman said. 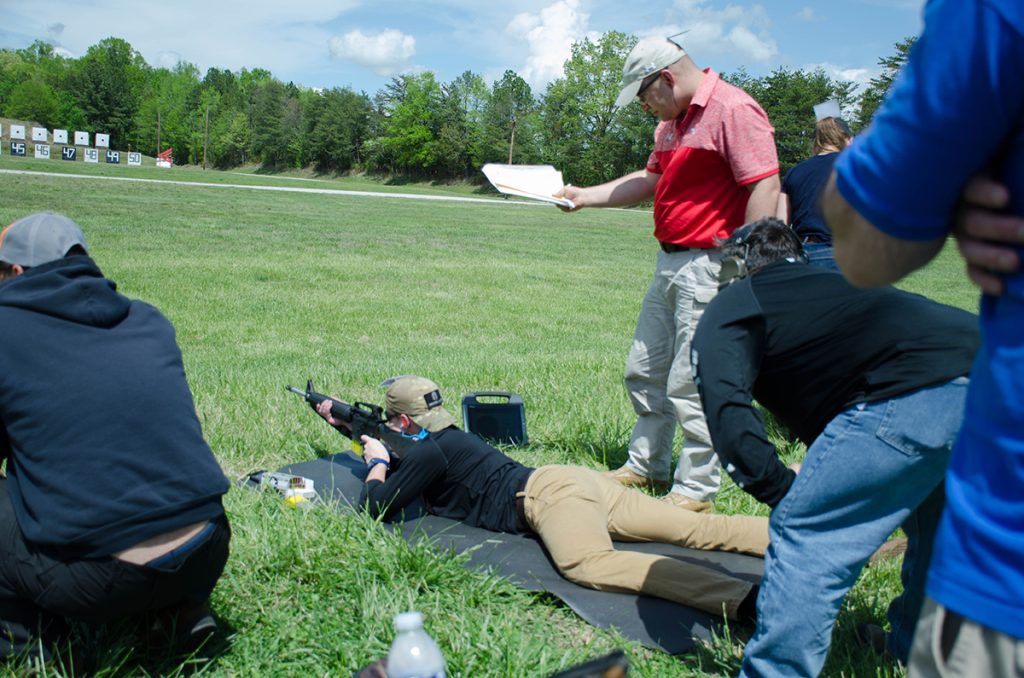 Assistant coach Richard Mast (in red), who won the event over the field of all competitors, was on the line to help his team.

Mast went on to say the training was not only beneficial to the members of the rifle team, but to the leaders as well, with some of the best marksmen in the country passing on their experience.

“Having the Army Marksmanship Unit here was just fantastic. I personally learned, taking notes, and the kids were taking notes,” he said. “You have the best of the best here facilitating and coaching on the line, and they can immediately put into practice what they learn in a classroom environment. So this is definitely something that the students will say, that this was fantastic.”

Hartman added, “I was also very, very impressed by the level of professionalism and also how well organized this event has been by the CMP. I can’t say enough good things about coming here and what a good event it is.” 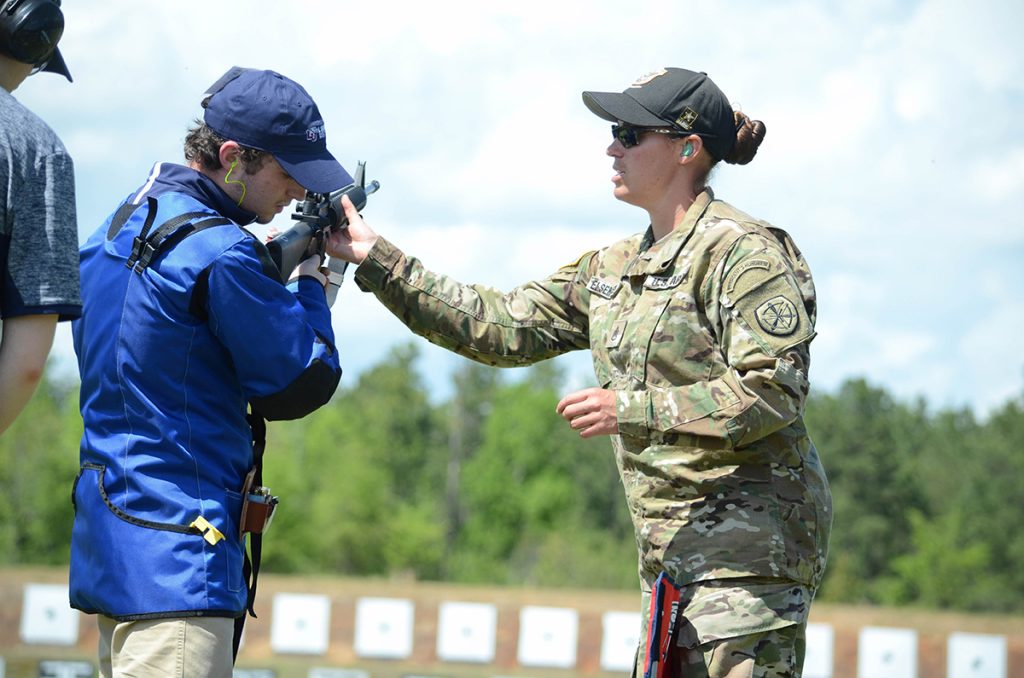 During training, the students learned basic fundamentals as well as competition techniques.

The coinciding M16 match was the first real competition for the rifle team, though Mast said several have shot some CMP air rifle postal matches that the team will continue in the future. The staff even purchased an Orion scoring system for the school so they can compete virtually and send in results to the CMP for quarterly postal matches.

For the future, Hartman said, “Who knows? Right now, the emphasis is strictly on club level, with a long-term goal of fielding league teams and getting competitors on the podiums at competitions.”

“We’re enjoying what we’re doing and we’re working very hard to excel at these type of matches," he added. 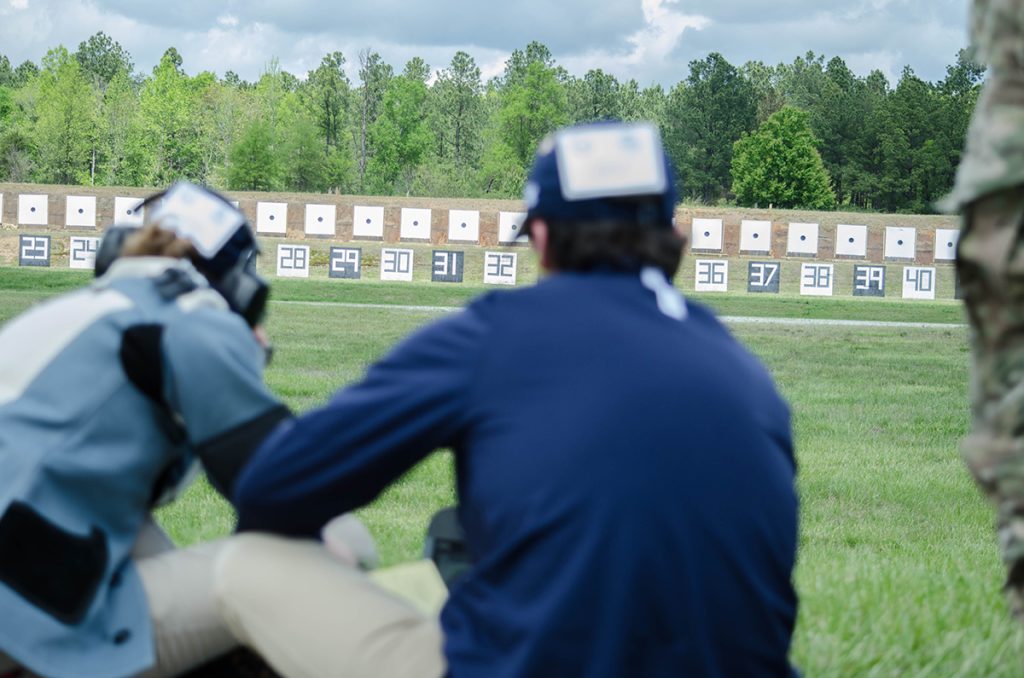 The team also had the opportunity to fire on CMP’s electronic targets.

According to Brad Butler, the Liberty University planning coordinator, students have long been asking for a place to hone their firearm skills. The school has already offered a free firearms safety training that over 3,000 students have taken advantage of, further showing the high interest.

The university’s president has also been highly committed to supporting the Second Amendment, allowing faculty, staff and students to carry guns on the private campus as long as they possess the proper permits.

“The university has been whole-heartedly supportive of this endeavor,” said Hartman.

Before embarking upon Liberty University, Hartman and his wife founded the Spokane Area Youth Shooting Team back near their home in Spokane, Wash. – a team talented enough that it went on to win the USA Youth Education in Shooting Sports National Title in 2015 with help from his son, Tommy, who was a member.

When it came time for Tommy to head off to college, he chose Liberty University, but soon realized there was no place on campus where he could practice his skeet shooting.

After hearing rumors that the school was interested in building a team and a range, Hartman contacted administrators, asking if they were going to get a team together in the near future and also offering his expertise if the school needed any guidance.

“My thought process was, since I already had a team that had done well in Spokane, I would try to give any of my information or knowledge gained over the years to whoever was building a program at Liberty,” he said.

As it turned out, the university was already looking into building a range and even had an extensive plan in the works. Hartman stayed in touch during the process and, eventually, they offered him the position as head coach of the program.

“My wife and I talked about it, we prayed about it, and I accepted,” he said, with a smile.

His duties began last January 2017 when he attended SHOT Show, an annual tradeshow for the outdoor and firearms industries. From there, he has spent his time re-establishing old contacts within the shooting community to recruit students for the program – a daunting task considering he was doing so without a range to offer or even a real program in place.

“I was recruiting basically like a wing and a prayer, with a promise that we could put this together and that the kids could come and get a first-class education but also continue the sport that they love,” Hartman said. “We’re offering opportunities.”

When it came time for a range to be built, the university spared no expense. Initially, after the plan was submitted to the university president for $1.5 million to get started on the large endeavor, he turned them down – astoundingly proposing $3 million for the project instead.

Construction on the range, which was actually projected for a total cost of $3.2 million, began last summer. Spreading across nearly 600 yards near Liberty’s main campus, the new Liberty Mountain Gun Club covers all of the bases for marksmanship enthusiasts.

With 100-, 200-, and 300-yard rifle components, a pistol/three-gun range that measures 80-yards wide and 50-yards deep, as well as a shotgun range that has an International bunker trap with an International skeet field overlay, American trap with an American skeet field overlay, 5-stand, wobble trap set and the beginning stages of two sporting clays ranges – there’s a little something for everyone.

Be sure to keep an eye on the Liberty University shooting teams as well as the progress of their range as they continue to develop into the future!