CAMP PERRY, Ohio – When most think of summertime in Port Clinton, they think beaches, boating and, in general, having an unlimited amount of fun in the water and on the shore. For others, summer in Port Clinton still means fun on the shoreline, but fun gearing up for the incomparable World Series of Shooting Sports at Camp Perry. 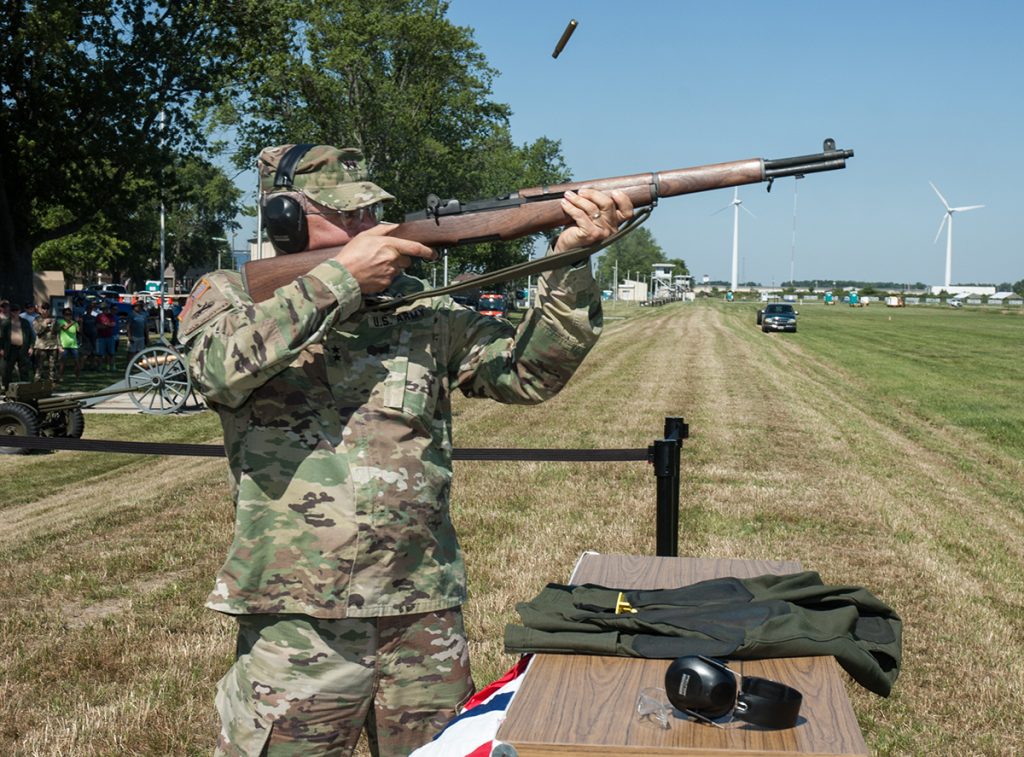 The National Trophy Rifle and Pistol Matches has welcomed millions of competitors and guests to the Port Clinton area since 1907. Embracing competitors from across the country, (and even some from countries like England and Australia, among others), the National Match event features a variety of rifle and pistol competitions and clinics for marksmen ranging from some of today’s most prestigious shots to those who have never pulled a trigger. The National Matches are held to promote competition and excellence, while also striving to teach marksmanship safety and fundamentals to the old, young and everything in between.

The annual event at the Camp Perry National Guard Training Base is hosted by the Civilian Marksmanship Program (CMP), with help from the Ohio National Guard. 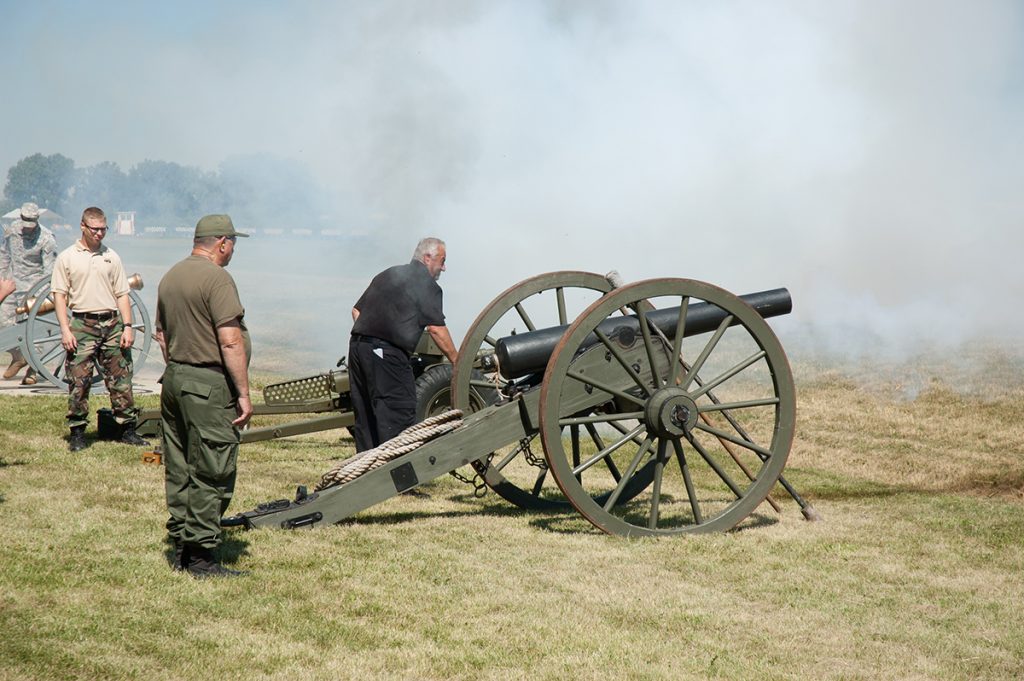 A trio of historic cannons blasted pillows of white puffy smoke to kick off the First Shot Ceremony.

Each year, the CMP pulls together a show of distinguished guests and historic elements to celebrate the official opening of the National Matches with its renowned First Shot Ceremony. The event is always open to the public and includes authentic vehicles from the past, including a World War II B25 bomber and a U.S. Navy TBM Avenger, along with a parade of Model T cars that provide free rides for guests. The ceremony concludes with a rifle shot fired downrange – signifying the “first shot” of the matches. 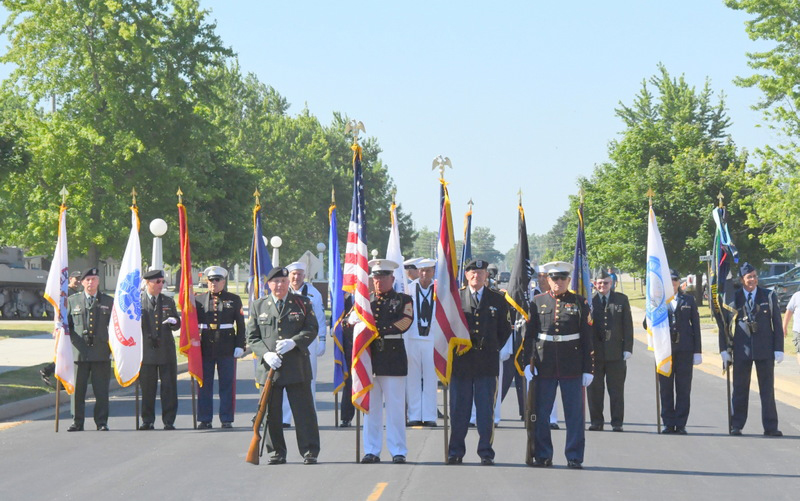 Members of the 555th Honors Detachment color guard from Wooster, Ohio, stood resiliently during the ceremony.

Members of the 555thHonors Detachment color guard from Wooster, Ohio, and veterans from a variety of wars were also in attendance, along with the Ohio National Guard’s 122ndArmy Band. Mr. Lloyd Boyer, a 92-year-old veteran who served in field artillery in General Patton’s third Army in the European Theatre, proudly stood at the entrance of Rodriguez Range, where the event is held, fully dressed in uniform. 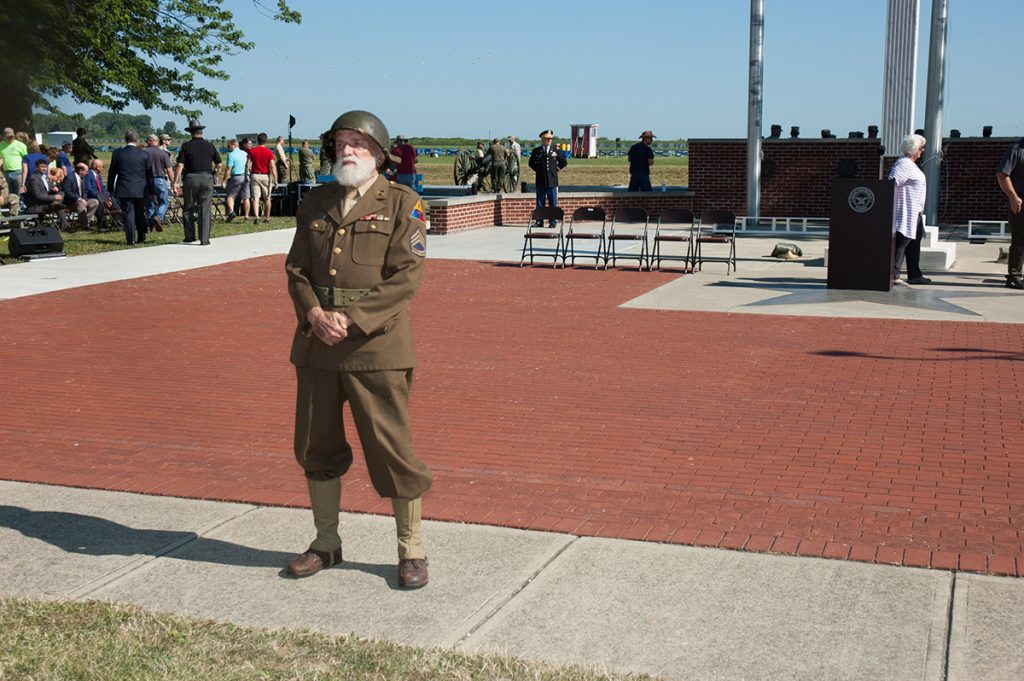 Lloyd Boyer, a 92-year-old veteran, was poised and proud at the front of Shooters’ Plaza.

The ceremony began with the booming blasts of three historical cannons promptly at 10:00 a.m. – aimed downrange at Camp Perry’s iconic black and white firing lane numbers. CMP’s Chair of the Board, Judy Legerski, greeted the crowd and gave a short history of Camp Perry and the National Matches as she kept the ceremony moving. 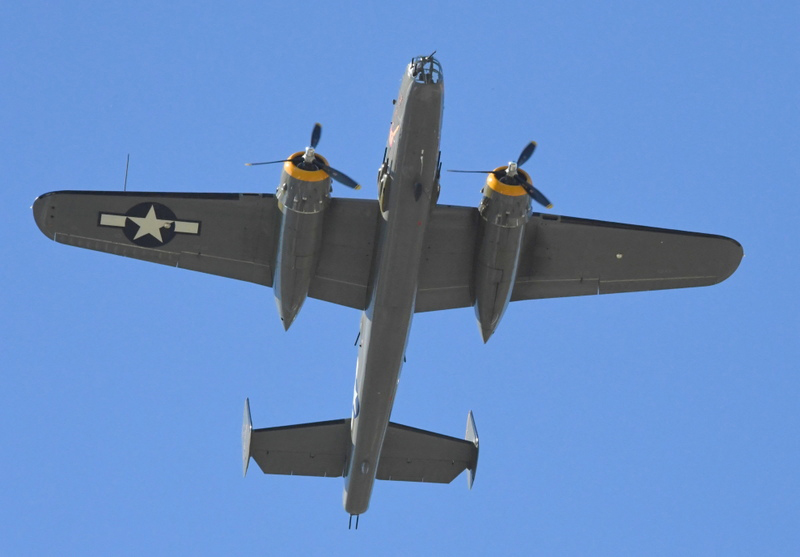 The B25 Bomber, Georgie’s Gal, is on display at the Liberty Aviation Museum in Port Clinton.

A light and pleasant breeze cooled the morning air when the crowd in the stands at Shooters’ Plaza in front of Rodriguez Range suddenly turned their eyes to the bright blue sky overhead – the buzzing of the World War II aircrafts steadily growing from the distance as they approached the stands. Spectators cheered when the stunning aircraft flew low towards Lake Erie, giving a close view of their timeless craftsmanship. The planes then looped over the water to come back and wow the stands again, as bursting clouds from the pyrotechnics exploded on the range below to simulate an air strike. 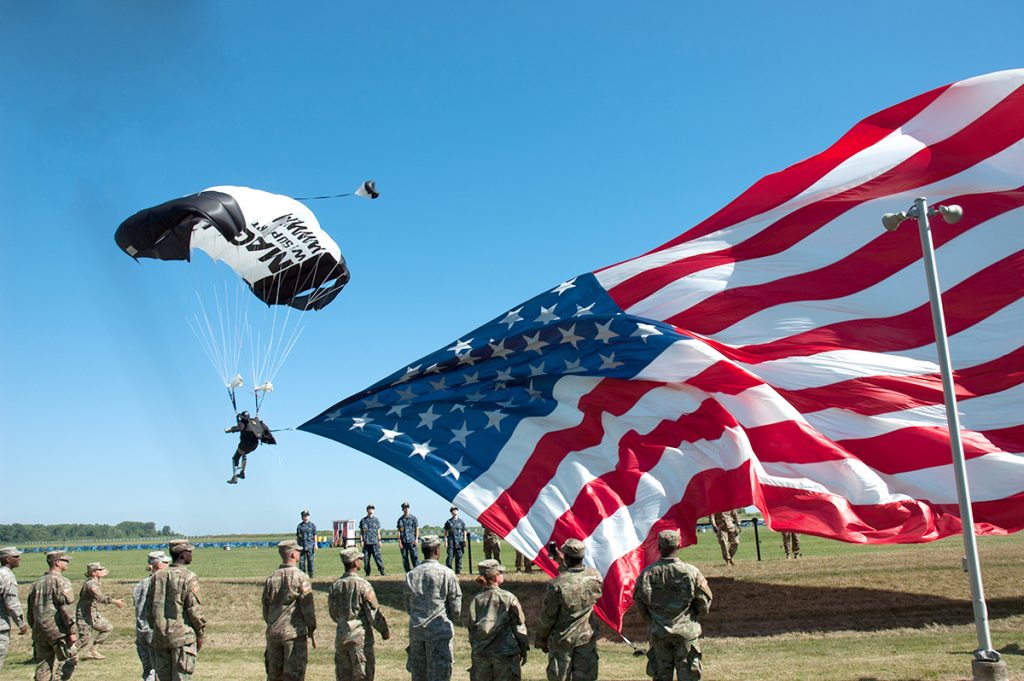 Double-amputee SFC Dana Bowman parachuted from 6,000 feet to the ground, with an American flag behind him.

After the planes left sight, a truly unforgettable display of American sacrifice and spirit cascaded to the ground when retired SFC Dana Bowman, a U.S. Special Forces Army Ranger and member of the Army’s Golden Knights parachute team, jumped from 6,000 feet and parachuted onto the range – towing behind him a massive 2,500 square-foot American Flag. Many were brought to tears as SFC Bowman gracefully descended towards the green range grass with the classic “God Bless the U.S.A.” ballad playing over the loudspeakers.

In 1994, during a parachute team practice with SGT Jose Aguillon, SFC Bowman collided with his teammate in air at nearly 300 miles per hour. SGT Aguillon was killed in the accident, while SFC Bowman’s legs were severed mid-air. Unwilling to be defeated by the disaster, he astoundingly became the first double-amputee to re-enlist in the Army and rejoined the Golden Knights, now jumping with specially-designed prosthetic legs. 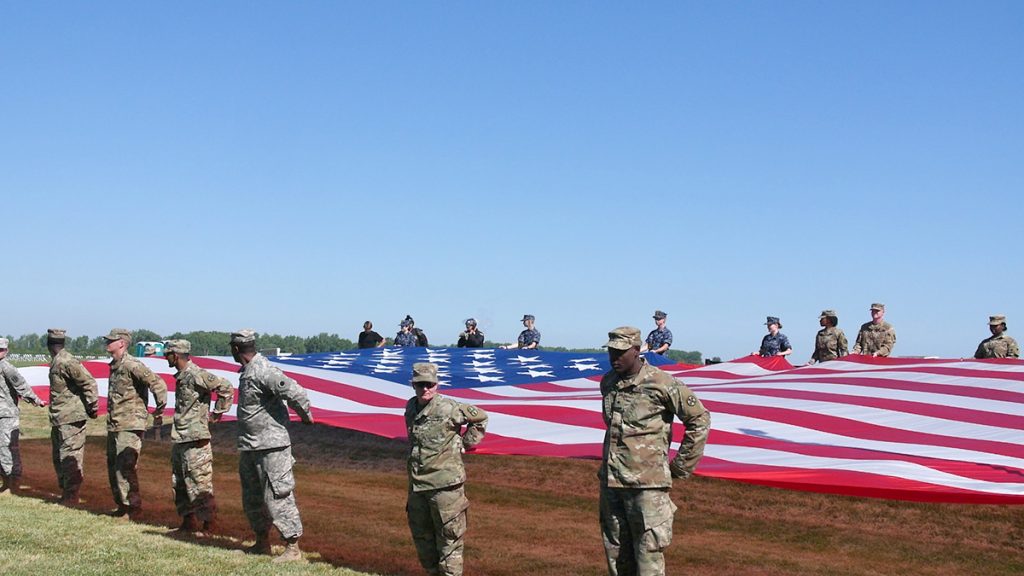 Representatives of the Ohio National Guard stretched the 2,500 square-foot flag on the range.

A native of nearby North Ridgeville, Ohio, Bowman’s mother, sister and other family members were present at the ceremony. As founder of the non-profit HALO for Freedom Warrior Foundation, Bowman became connected with the CMP after purchasing a few rifles from the sales department. When the idea of jumping at the First Shot Ceremony was discussed, he was more than happy to take part.

“This is my kind of team here,” he said. “I got to speak and meet-and-greet with so many people.” 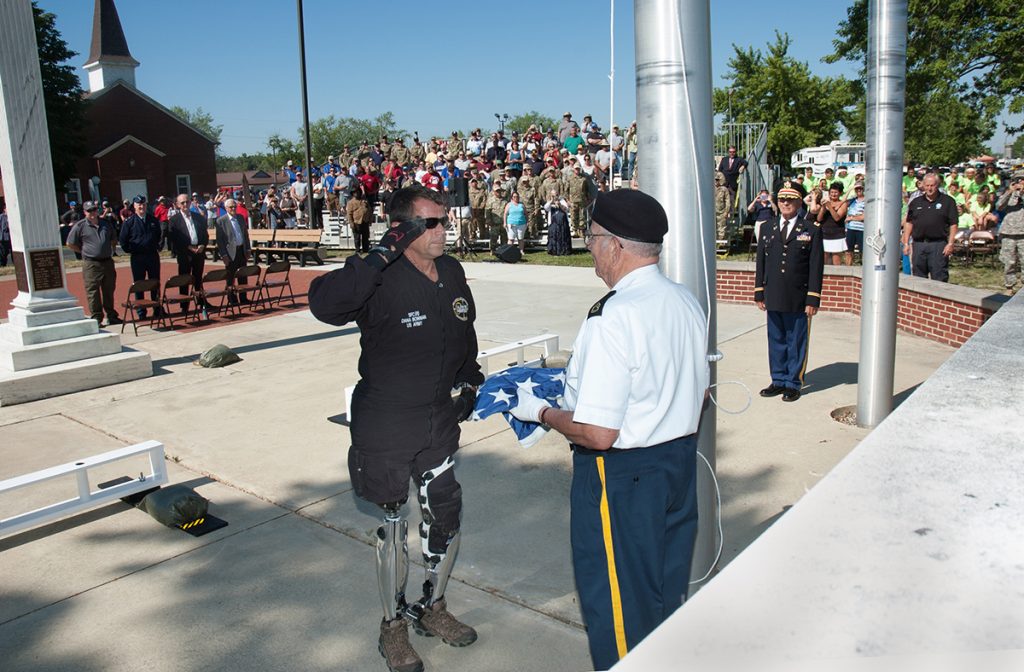 SFC Bowman delivered the flag after his parachute descent.

Bowman seized the opportunity to shake the hands of veterans and children in the crowd after the First Shot, thanking the veterans for their service and implanting inspiration into the next generation of Americans – a common theme of the National Matches.

“Look what the CMP does for our youth. We can’t forget about our youth,” he said. “CMP instills from the beginning to never forget about why we’re here. Our forefathers started this. Why not leave a legacy? I’m just glad to be part of it.” 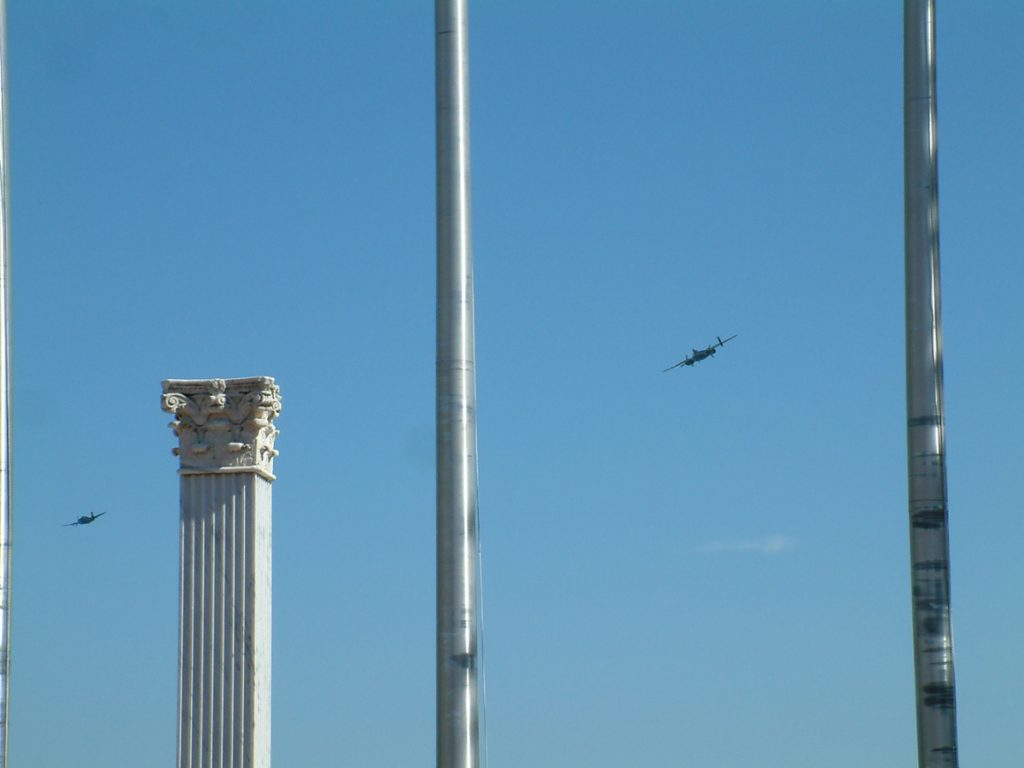 This year’s First Shot Speaker was Maj. Gen. Clark LeMasters, Jr., Commanding General of the U.S. Army Tank-automotive and Armaments Command and the Senior Commander of TACOM Life Cycle Management Command, U.S. Army Garrison-Detroit Arsenal, Mich. After briefly addressing the crowd, Maj. Gen. LeMasters strolled up to the 600-yard berm of Rodriquez Range, put on his eye and ear protection and fired the ceremonial “first shot” downrange with one of CMP’s M1 Garand rifles. The target downrange exuded a puff of smoke to imitate the shot bursting on impact – marking the true start of the National Matches. 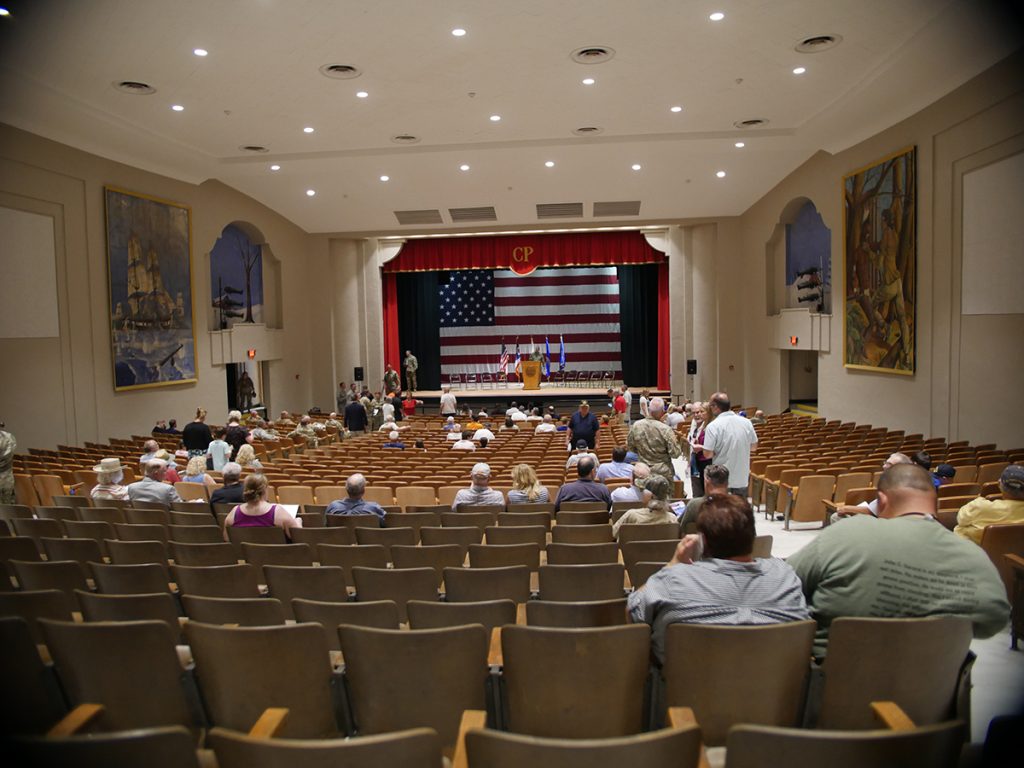 After the First Shot ceremony, those in attendance took a short walk across the street to witness the ribbon cutting ceremony of the new Hough Theatre, presented by the Ohio National Guard. Over the years, the interior of the auditorium has witnessed some of the greatest American marksmen in history and famous entertainers like Bob Hope and Bing Crosby. The $1.6 million restoration of the theater pays homage to its beginnings in 1938, leaving some of its historical characteristics and adding modern conveniences that will accommodate guests well into the future.

The ribbon cutting ceremony also featured the pinning of a Bronze Star on one of Port Clinton’s own Vietnam veterans, Steven Fultz, who served as an Army Staff Sergeant during the war. The medal was presented by Congresswoman Marcy Kaptur. 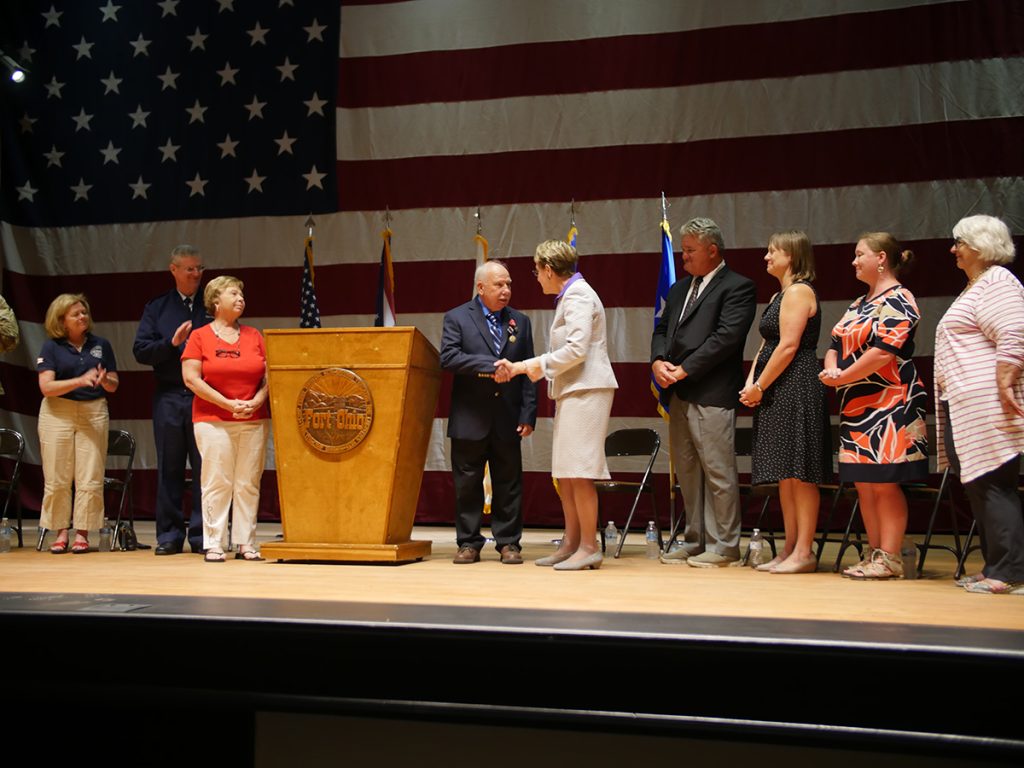 The first competitions of the CMP’s 2018 National Matches begin on Saturday, July 14, with pistol and continue through Wednesday, August 8. Along with pistol, the CMP will also hold smallbore, service rifle, vintage rifle and long range rifle events and clinics. CMP staff and trained support members will be on the firing line at each competition to ensure safety throughout the National Matches.

Open to the public year-round, guests may visit the grounds of Camp Perry at any time to observe or participate in National Match competition, with festival-style food vendors and shopping opportunities open during event days. Entry and parking around base is completely free.

For more information on the CMP’s National Matches, including a calendar of events, visit http://thecmp.org/competitions/cmp-national-matches/.

The post CMP’s 2018 National Pistol and Rifle Matches Start Off With a Bang at Camp Perry appeared first on Civilian Marksmanship Program.