CMP Electronic Targets Part 2: From The Competitors Themselves – Age Is Just A Number

The CMP’s traveling highpower electronic targets are gaining momentum leading up to September’s New England Games and October’s Western Games. Garand/Springfield/Vintage Military/Modern Military (GSMM) Matches, which typically run four relays each day, have expanded daily totals to nine and 10 relays during its scheduled times, while the Vintage Sniper Rifle Team Match and other matches have been finishing in record time. The targets eliminate the need for pit duty, allowing more time for the fun part of CMP Games events – the shooting. 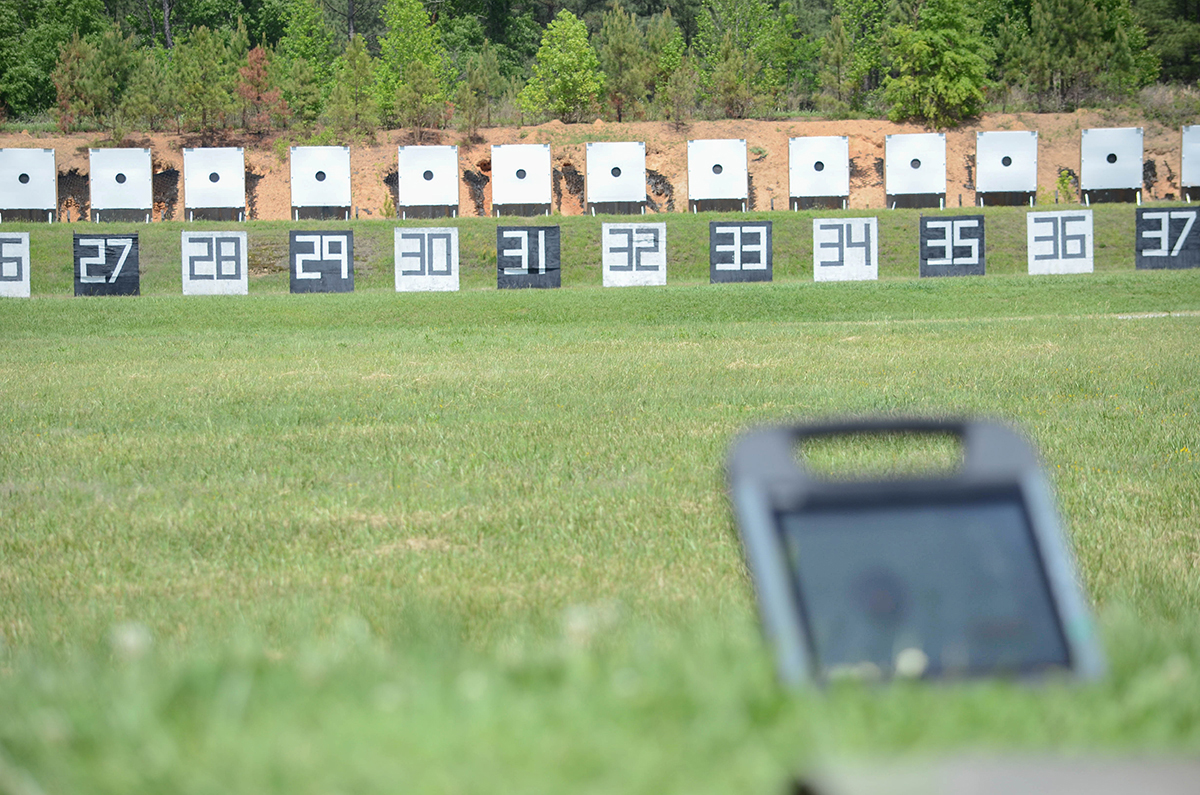 The CMP’s traveling highpower electronic targets were used at the Oklahoma and Eastern Games before heading to Camp Perry in June.

“I’ve got nothing but good things to say about what you guys are doing,” said Dick Hamilton, 71, of Palmer, MA, after firing on the targets at the Eastern CMP Games. “It’s like anything else. The more we shoot with it, the more we’ll get used to it.”

In the spring after a frustrating experience at a match featuring a competing brand of targets at another organization’s event a few months before, Hamilton said he became unsure about whether or not he wanted to attend the Eastern Games once he heard the CMP was going to use their own electronic targets for all of the matches in North Carolina. But, as soon as he fired upon them, he became instantly comfortable with the CMP’s system.

“I really think as time goes on, it’s going to start getting more and more popular. Plus, the word’s going to get out how reliable they are,” he said. 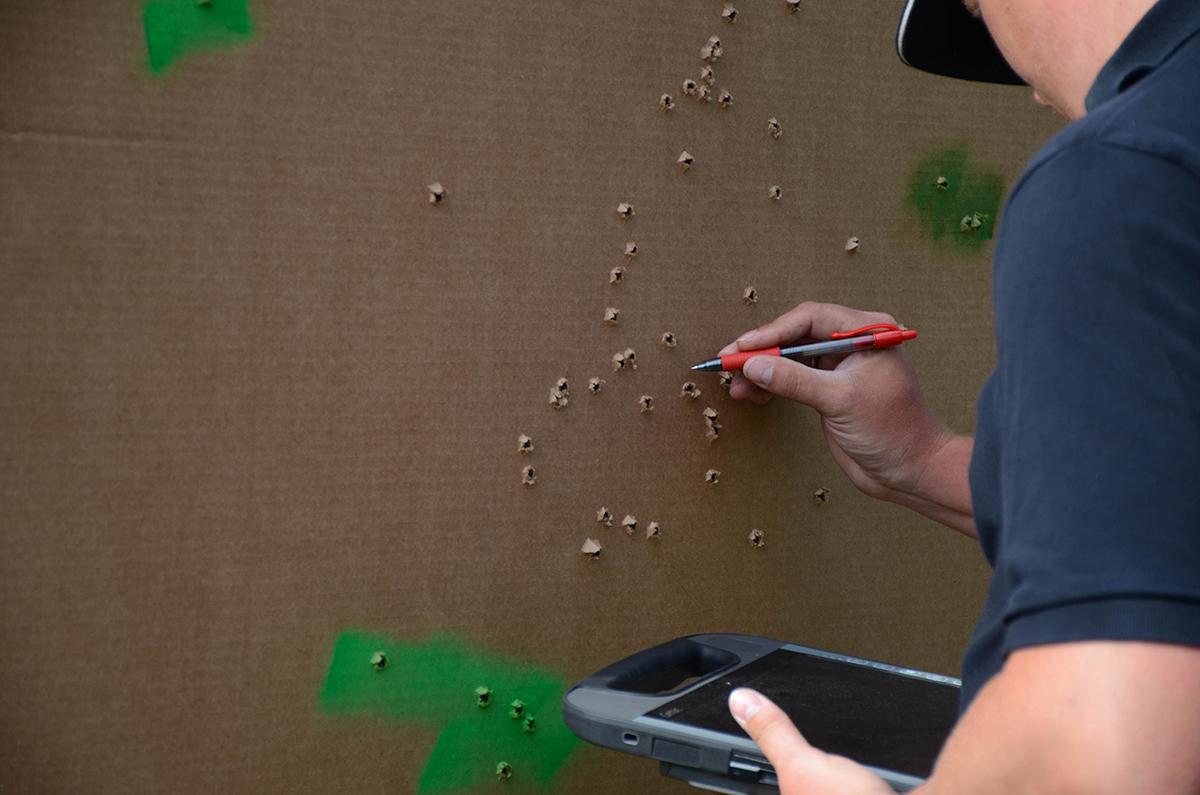 Cardboard backers are placed on the targets and used to verify shot accuracy.

CMP’s decision to place cardboard backers on the electronic targets is being done to provide reassurance to the competitors that their shots are being scored accurately. When a shot pierces the target, it also provides a witness mark on the cardboard backer. In the case of a challenge by a competitor, the bullet trace can be compared to the computer’s coordinates to verity the shot position. It’s seldom needed, but provides physical proof that the system is doing its job. The witness cardboard also helps confirm crossfires and the target sensors pick up vibrations from close misses.

“And some people’s scores will go down because they don’t have people to say, ‘Well that’s close enough,’ when they’re scoring their buddy’s target,” Dick said with a laugh. “It’s going to make people more honest, which is a good thing.”

Besides accuracy, Hamilton also commented on the ease of the target use. He mentioned how he’s heard some apprehension from other competitors his age about using an advanced system. But the veteran shooter, who admits he isn’t up-to-speed on today’s technology, was impressed with the simplistic style of the CMP system. 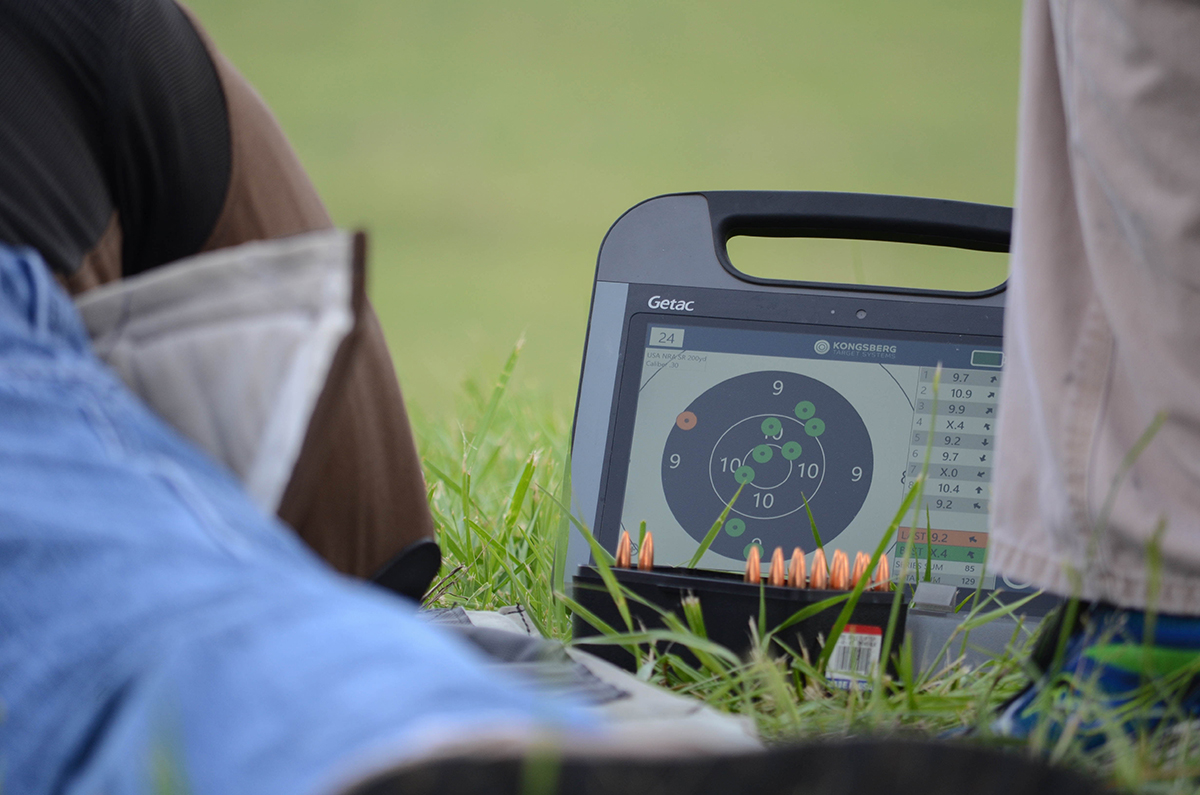 The monitor screen is bright enough for competitors of all ages to be able to see and is extremely user-friendly.

“You can see on these monitors. You can put the screen all the way out in front of you and can still see everything. There wasn’t one time you couldn’t read it,” he said. “So that right there is 100 percent better, just in itself.” 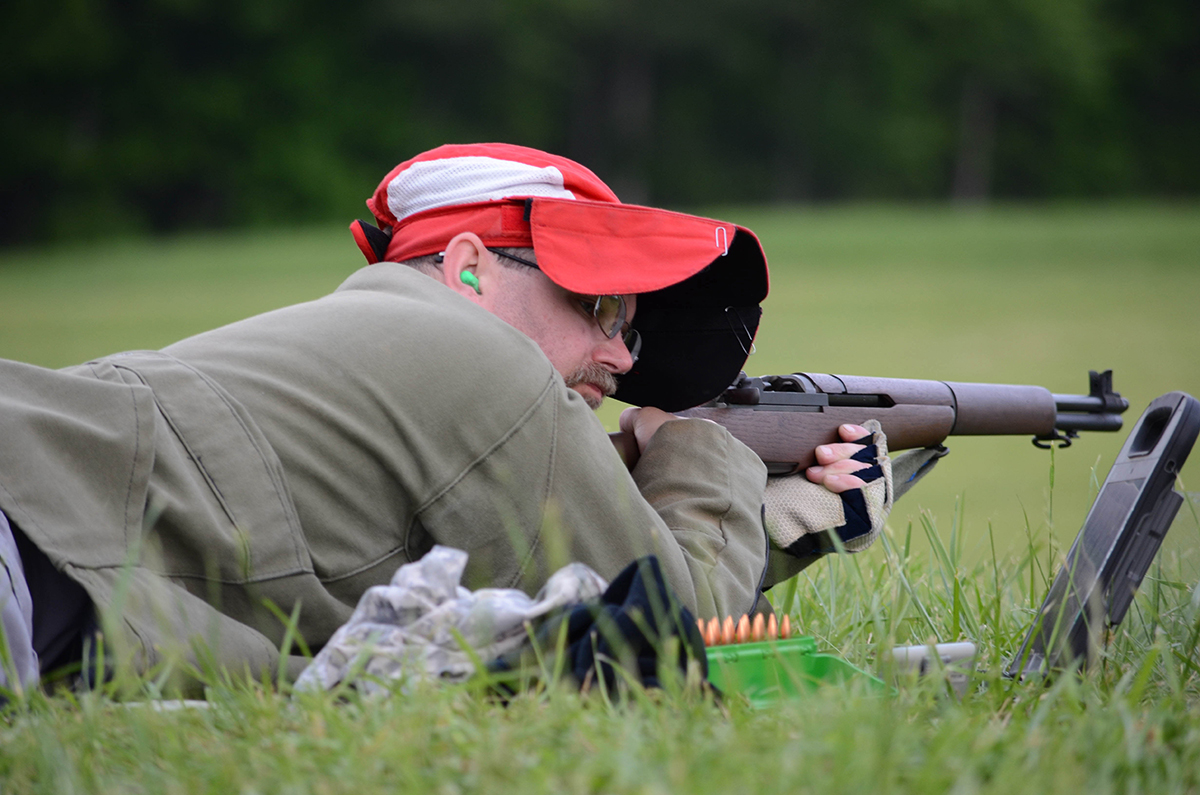 Competitors who have used the targets also enjoy the ability to easily check each shot on the monitor after it was fired with just a turn of the head.

Art went on to say, “The electronic phobia is going to be cast over the whole thing. People won’t shoot because they don’t have a computer in their home, wouldn’t have one. You know, it’s not something they’re comfortable with on any level. So making it as close to the paper targets as possible is what you do. [CMP’s] is simple.”

“You’re going to spend less time and shoot more. It’s going to make you a better shooter. No pits, more accuracy, and you’ve got a confidence in the system. It’s a lot more fun,” he said.

Hamilton added, “Guys here have hip problems, back problems, and this saves you from all of that. You just get to come out and do the fun part. And at the end of the day, you go home feeling a lot better.” 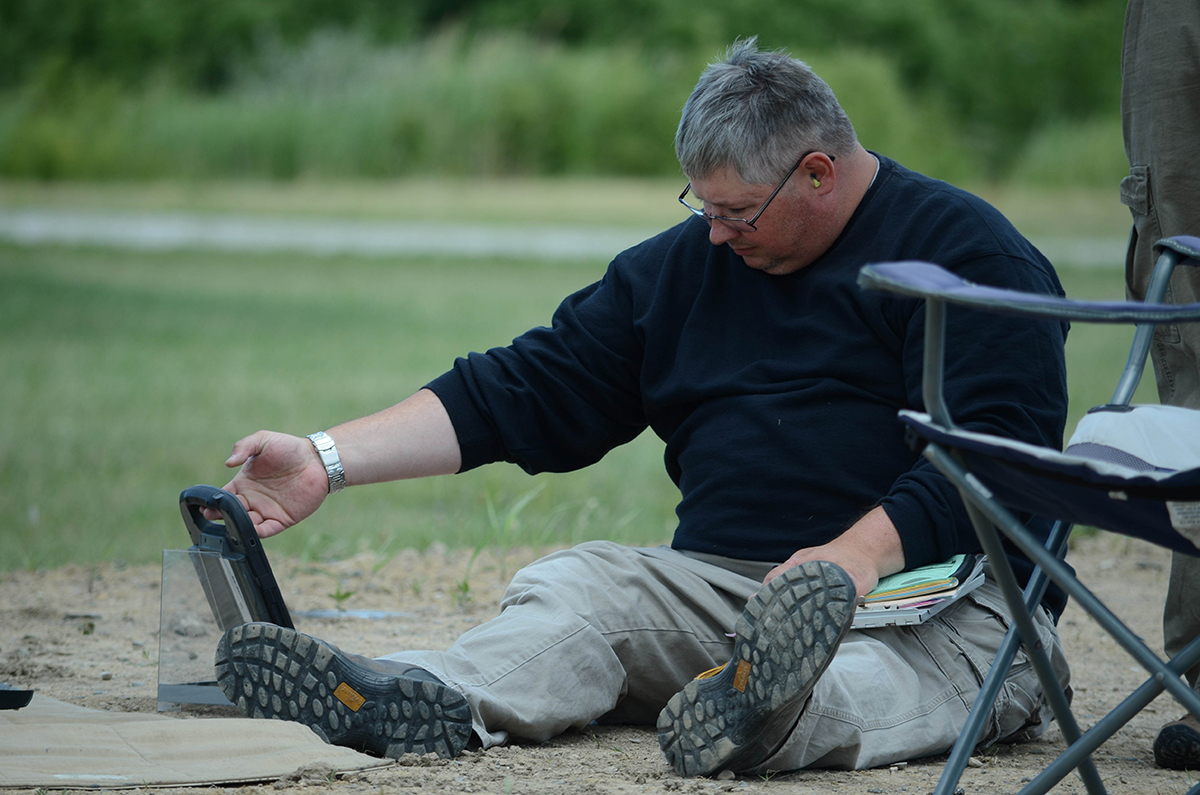 The monitors are easily read at close range as well as from a distance.

Other competitors at Eastern Games and the National Matches were captivated by the abilities of the software and were confident in the precision of the target program.

Their brother Caleb, 31, appreciated how the targets can cater to those with mounds of experience and those just beginning their marksmanship journey, saying, “This makes it easier for people who don’t have equipment, like a scope, to get in. All you pay is the registration fee, and I just brought what I’m wearing and was still able to score well enough to get my feedback.”

Jonathan added, “It was the best shooting experience I’ve ever seen as far as immediately finding out where you’re shooting – best I’ve ever had.”

Richard’s daughter Amanda, 14, and her friend Elijah Jantomaso, 18, also said they enjoyed firing on the targets – supporting how they are able to appeal to any age. 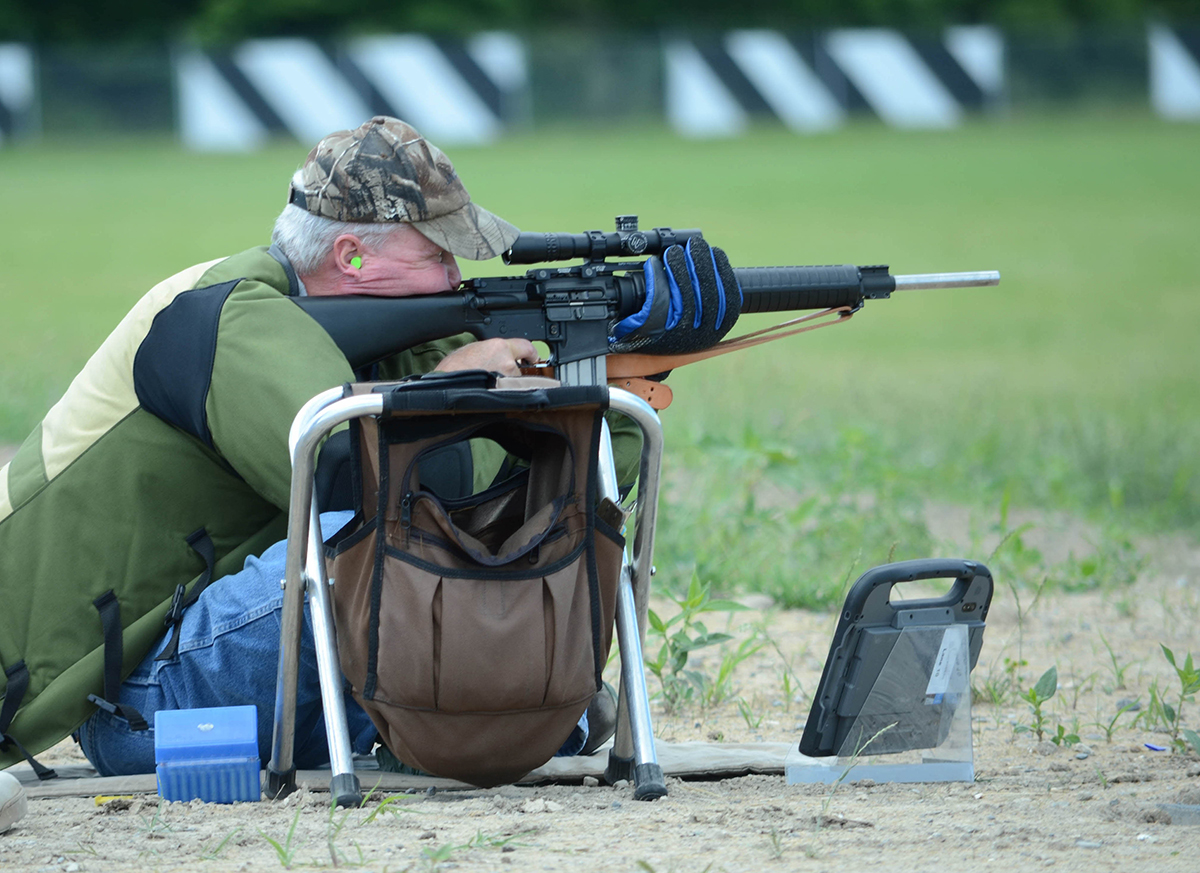 During the CMP Cup Series Matches at Camp Perry, competitors fired 36,000 rounds of ammunition with only a handful of issues.

CWO Brad Wise, 49, of the U.S. Coast Guard, drove down from Grand Haven, MI, to fire in the June EIC Match at Camp Perry, and returned to the same range a week later to compete in the Cup Series Matches that featured the improved electronic targets. Though some were discouraged by technical issues in the earlier EIC Match, Wise was still impressed by what he saw and was ready to try them out again.

He was astounded by the short amount of time it took to complete the Cup Series Matches each day – bragging about how he got to shoot and then leave to eat his lunch. He was understanding of the CMP’s continued challenges of the new target system and appreciates all of the hard work being put into the enhancement of marksmanship.

“Every time I strap something new to my gun, it goes bad for a couple of relays. That’s just the way it is. You’ve got to figure out the way it plays out,” he said. “There’s going to be a learning curve. Somebody’s got to go through it, and I was happy to be a part of it.”

Want to Try out CMP Targets?

The CMP will have targets at the following events:

Or competitors may visit the CMP Talladega Marksmanship Park in Talladega, Alabama. Spectators are welcome at our events and we encourage our competitors to come out and enjoy the newest technology in electronic targets.

Have Questions about the CMP Targets?

The post CMP Electronic Targets Part 2: From The Competitors Themselves – Age Is Just A Number appeared first on Civilian Marksmanship Program.