CAMP PERRY, Ohio – The Camp Perry National Guard Training Base, home of the National Trophy Pistol and Rifle Matches since 1907, is currently undergoing significant upgrades to some of the most celebrated areas of the grounds.

“There will be a different feel when people come onto post,” said MAJ Michael Yates, base operations manager of the Camp Perry facility since 2014.

Since his time at Camp Perry, MAJ Yates has overseen a considerable amount of projects totaling multi-millions of dollars, which have included structural, functional, aesthetic and historical developments. He admitted the renovations being conducted in 2018 have been years in the making – featuring major additions to base facilities and a substantial restoration in the historical theatre.

“We’re doing so much to continually improve the post and make it better,” he said. “Our predecessors have made it better, and we want to take it from there and continue to make it that much better for everyone to use.”

He added, “It’s been a century-plus of things going on here – people training up for World War I, to a POW camp for Italian and German prisoners during World War II, to all the different schools and people, soldiers, shooters coming through here. We want to ensure that they understand that we always keep an eye to this and want to show our legacy. Not only holding to it, but improving on it. That’s what we strive for.”

Even with the significant construction going on this year at Camp Perry, there is still plenty of improvements in store as MAJ Yates and his crew continue to plan for the future.

“There will be more to come,” he said.

Below is a summary of the major projects going on at Camp Perry in 2018. 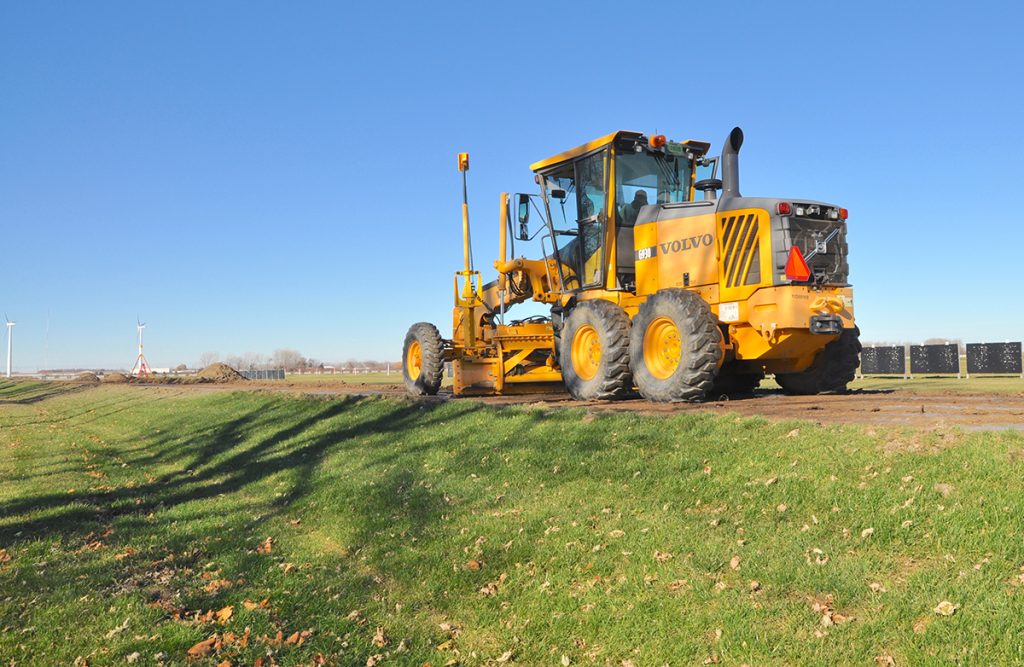 The berms at 300 and 600 yards were redone to allow more comfort for competitors.

Completed in November 2017, improvements were made on all of the berms by adding more room on top, to help those who train and hold competitions. MAJ Yates and his team partnered with the 200th Red Horse, Air National Guard Unit within the Ohio National Guard on the project – setting a solid 10-foot shooting platform to ensure everyone will be more comfortable. 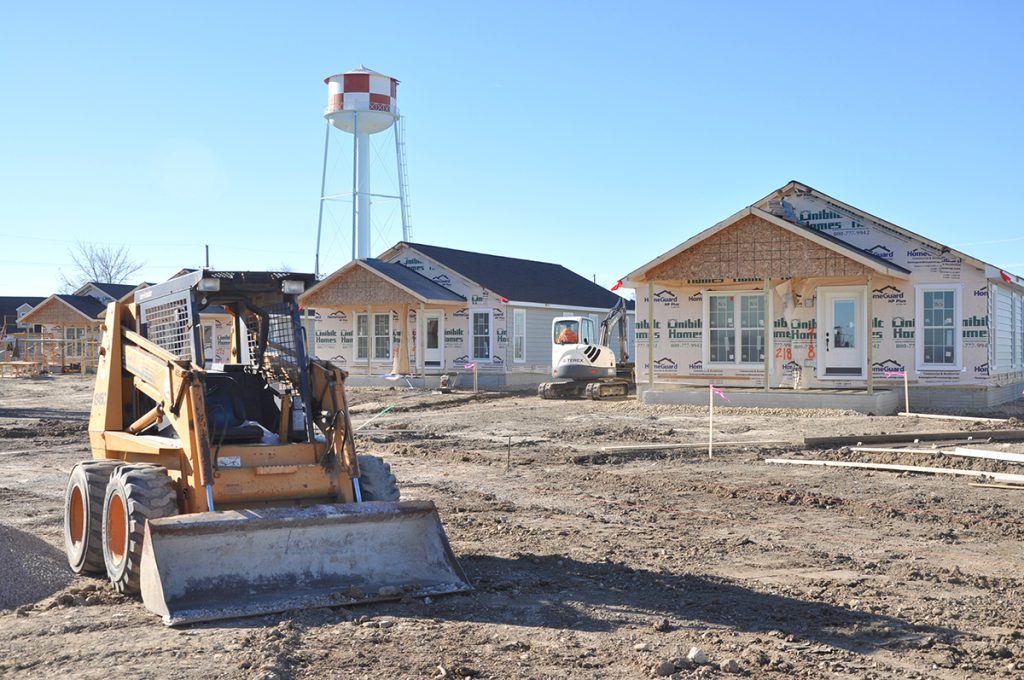 The old lakeside cottages are being replaced with new structures that all allow a view of the lake.

The old lakeside cottages, located behind the beach on base, are being phased out. The nearby tennis courts have been removed, and roads and walkways have also been repaved. Five new cottages are being built – totaling $2.25 million from the capital budgets.

All new infrastructure has been put into the area, including brand new sewer, water, electric and gas lines. The cottages will sleep eight, with three bedrooms, twoand angled positioning of the buildings to give every one a view of the lake from the porch to the kitchen.

“They are absolutely fantastic. Everyone gets a great view,” said MAJ Yates.

The modular style homes were built in a warehouse and brought in two parts, then set up and put together. The homes are designed with insulated style siding, plus insolation within to make them comfortable during the winter months.

Offering competitive pricing that is more affordable than the surrounding areas, the new cottages will be available to rent at Camp Perry 365 days out of the year.

“This is the best kept secret in all of Ohio,” said MAJ Yates. “People will get to see what a great stay Camp Perry is. It’s going to be a great upgrade to the facilities.”

MAJ Yates will be requesting for fiscal year 2019-2020 capital budgets to finish the rest of the cottages and replace existing buildings – demoing the rest and adding in 10 more houses.

The new cottages are planned to be finished some time in the spring.

The last cottages were built in the 1950s, based around tent pads that used to be on the grounds in the early days of Camp Perry. According to MAJ Yates, they were not energy-efficient and needed winterized – it was just time for an upgrade.

“We have done the best we possibly can with those facilities, and they have been great to us in the past, but it was time to make a step forward and to give everyone a great place to go to enjoy all of the local surrounding areas,” he said. “This is going to benefit everyone.”

The Club House next door can hold 350 people for parties and events. Located on the water, with a chapel on post and the cottages right next door, Camp Perry has become a sought-after destination for weddings.

The mural of the auditorium and other historical aspects will remain in the theatre, along with the addition of past photos and other Camp Perry artifacts.

Considered one of the most exciting projects on base, the Hough Theatre has received upgrades to entranceways, restrooms, seating, lighting and the interior as a whole – totaling $1.3 million. Some of the stage is being improved upon as well, including the orchestra pit, and existing offices and classrooms backstage will be updated, with the hopes of being utilized in the future.

“We have worked heavily with the state historical and preservation society to ensure that we have the historical feel to the auditorium itself, but with modern comforts,” said MAJ Yates. 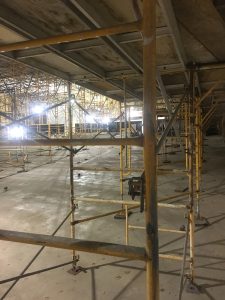 The old auditorium seats of Hough Theatre were torn out and will be replaced with more up-to-date seating. Construction on the Hough Theatre will not only improve the auditorium interior, but will also enhance classrooms and other areas of the building.

The original theatre seats were completely gutted from the building. The new seating will have the effect of the historical seating, but with more padding and comfort – designed for the modern world. The famous mural cascading across the walls around the theatre will remain intact, with much of the interior upgraded or kept as-is.

“It’s an amazing facility, and to bring it up to where it deserves to be is fantastic,” said MAJ Yates.

The Hough Theatre is an important landmark in the history of Camp Perry. Originally the second brick facility built on the post, the inside has seen many distinguished guests during its century-old reign, including countless military and civilian heroes like General John Pershing after World War I and Bob Hope.

The new entranceway of the theatre will throw homage to its incredible history, displaying true photos and artifacts for guests to enjoy. With a projected completion date slotted for the spring, the building will be ready in time for the National Matches ceremonies.

“This has been many years in the coming, and I’m really excited to see what this is going to look like,” said MAJ Yates.

Camp Perry’s Bldg 2009, the long, large building before the historical park when entering base to the north, has undergone an exterior renovation for $640,000.

First constructed in 1903, a new roof, exterior doors and windows have all been installed on the building. MAJ Yates worked with a historical society to again ensure the facility was restored to the times, with modern upgrades, but still within the guidelines of historical restoration.

Demolition of the rest of the old POW huts by existing two-story barracks on the west side of post will continue until completion. Eight other facilities will also be coming down to clean up post, ridding those that are not used or are passed where they are able to be reutilized. The project should be completed in June 2018.