A Wild 36 Hours in California

Well, for those of you who don’t live in California, this case has probably not been at the top of your mind, but for those of us who live here, we’ve been keeping an eye on this case for the last couple of years, after opposing the original ballot measures and legislation (both of which passed and conflicted with each other) as being nothing more than a way for then Lieutenant Governor Newsom to start his campaign for Governor before actually announcing.

Which it was, and he won. And the issues we raised about the issue were proven right as thousands of people were denied (wrongfully) the ability to buy ammunition. There has also been a couple of different lawsuits around this mess, one on mandatory magazine turn ins (Which resulted in Freedom Week, with likely millions of “high capacity magazines” as defined by the law flooding into the state, creating nationwide shortages for a month or two, and despite the influx, no massive spike in the murder rate or suicide rate) as well as the lawsuit around ammunition background checks.

This ammunition background check lawsuit was filed back in 2018, as “Rhode V Becerra”, almost immediately after the passage of the two competing legal frameworks were passed by a variety of people joining in, including Kim Rhodes, a competitive shooter, who orders her ammunition in bulk online to compete in the Olympics, online sellers who now are unable to engage in the interstate commerce of selling goods to folks in California, and others.

It’s been fairly quiet since then until Thursday of this week, when Judge Benitez granted an immediate injunction prohibiting the enforcement of this law on Thursday, and immediately Californians began crashing various websites and running a number of them out of stock by snatching up ammunition as quickly as they could. The state filed an appeal, which was denied by Benitez, but then at around 10pm Friday, they filed an emergency appeal to the 9th and it was granted, bringing sales to a crashing halt. 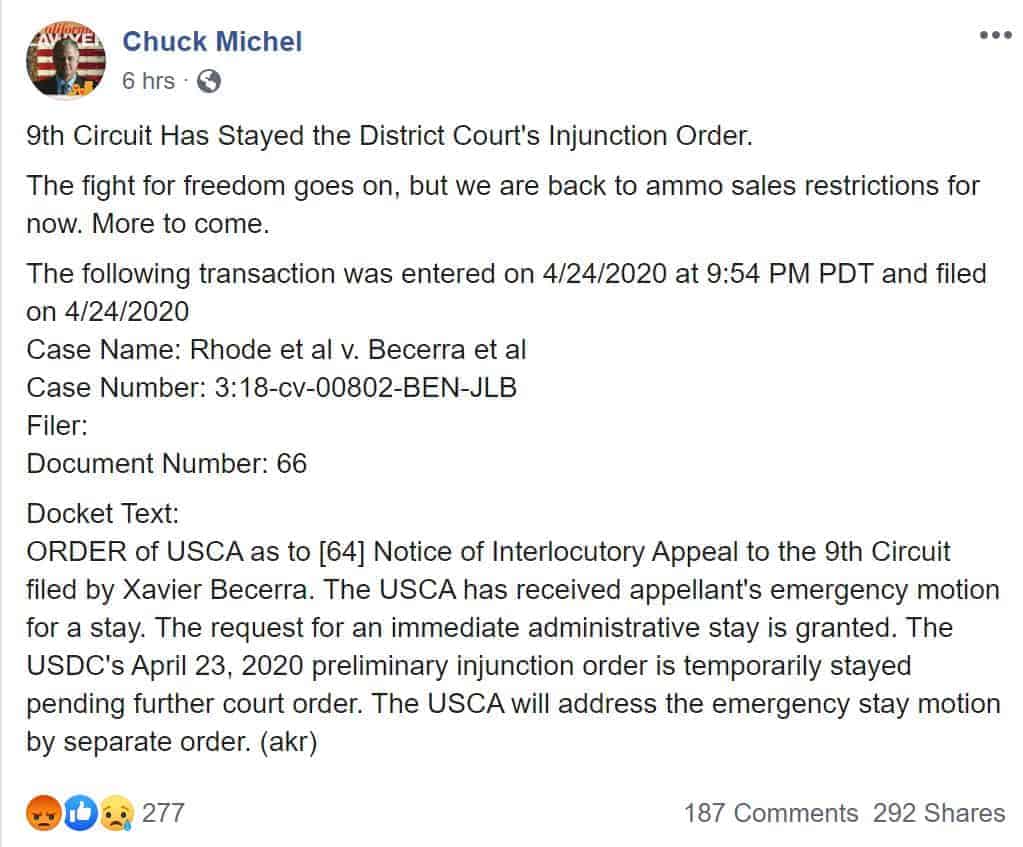 It’s been a wild ride around here. We here at the club still think this law is misguided, a direct infringement on the rights of Californians, and interferes with interstate commerce. It’s made it difficult to have events, (Made for a heck of a scramble for our national meeting last year figuring out how to make it work) difficult for people to sell or trade ammunition with other folks (as those transactions are required to go through an FFL, even for a box of 22 or if you found a box of something that you don’t have a gun for anymore.

All with no evidence at all that it’s reduced the homicide rate or suicide rate.

So more to come on this as the case winds its way through the courts. And although now Governor Newsom has done an arguably good job with the current COVID-19 pandemic response, we really wish he hadn’t gone down the road of Prop-63 in the first place.