A couple of centenarians … in .32 ACP

I recently got to shoot a couple of very nice little pistols in .32 ACP … which date back to before WWI. 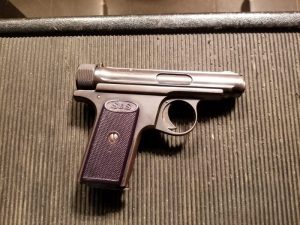 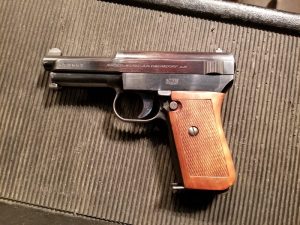 I’m not going to try and do an in-depth review of either gun. I didn’t shoot either one enough to really develop a strong opinion, and the two links above go into the history and context of the pistols is detail.

But I am going to say that I was honestly surprised at just how accurate and easy to shoot both of them were. Each one gave me about a 6″ group at 10 yards the first time I shot it, and I was sure that a little practice with either gun would have improved upon that quickly.  They both felt comfortable & solid in the hand, easy to hold, easy to shoot.

And, surprisingly, both “spoke with authority”. What do I mean by that? Well, I must admit that I don’t care for the .32 ACP round much, and consider it sub-optimal for self-defense purposes. Out of barrels about this size, you’re only going to get about 125 ft/lbs of energy. Just stepping up to .380 ACP out of a similar sized gun will give you about half again the power … or more.

But when I thought about it, I realized that most of the .32 ACP guns I’ve shot were smaller than these … they were what we would call “mouse guns”, and never felt very solid in my large hands. Neither of these two pistols are “large” — both are about the same size as a PPK — but they really felt like ‘real’ guns. That physical size difference made a big psychological difference for me. Just knowing that I could reliably  put rounds where needed matters.

Other factors to consider in understanding these guns in context: when they were made, and for what purpose. At the turn of the 20th century, people were smaller, hence the need for less penetration than is generally considered to be the case today. Medical treatment was both less developed and less available, and there were no antibiotics. This means that even a non-incapacitating wound had a very real chance of being lethal within hours or days — making getting shot something you wanted to very much avoid. While both of these guns did go on to see military service, they weren’t really designed as weapons of war. Rather, they were intended for police and private use, and by all accounts served in these roles admirably.

Given that both guns were over 100 years old, they were remarkably reliable. Between myself and my shooting companions, we put about a box of ammo through each. I don’t recall the S&S having any issues whatsoever, and the Mauser only had a couple of glitches with failure to cycle completely. Since we didn’t take the guns apart for a detail cleaning (though we did a quick inspection to make sure they looked to be in good condition), that could have just been due to build-up of dirt or weak recoil spring. At 61 myself, I sympathize.

Fun guns. If you get a chance, handle and shoot either one. You might be surprised at how much you like it.