As part of our historical rifle weekend, we shot 4 different reproduction rifles all dating to the latter part of the 19th century. In rough chronological order, these were the Spencer Repeating Rifle, the Remington Rolling Block Rifle, the Springfield Model 1873, and the Winchester Model 1885 (High Wall version). Here are our four reproductions:

From left to right in the image:

All shoot the .45-70 cartridge, except for the Spencer, which is in .45 Colt. All are like brand new, having been fired little, even though they were a few years old. Full info is readily available about each original design, as well as about these reproductions, so I’m just going to share some thoughts and video on each one without going into a huge amount of detail.

This nice little reproduction by Chiappa is a very handy and fun gun.

The quality of the gun overall is quite nice, with good wood and a very attractive case-hardened receiver. The lever-operated loading mechanism was smooth, but both the trigger and the extractor were in need of breaking in, as can be seen in this video:

This gun holds seven rounds of .45 Colt in the tube magazine located in the stock (the same number as the original in .56-56 Spencer, which has similar ballistics to the modern cartridge). We were only shooting at 25 yards, but this was an easy gun to use quickly, and I can see how it would have been a revolutionary improvement over the muzzle-loaders of the era.

The Remington Rolling Block No. 1 Sporter was a very fine gun, exceptionally well made with excellent fit and finish in every regard:

The rolling block mechanism was solid, and gave confidence that it would hold up to plenty of use shooting full-power .45-70 loads. Likewise, the substantial weight of the gun meant that recoil was manageable. This is a gun I could easily spend a day with at the range. 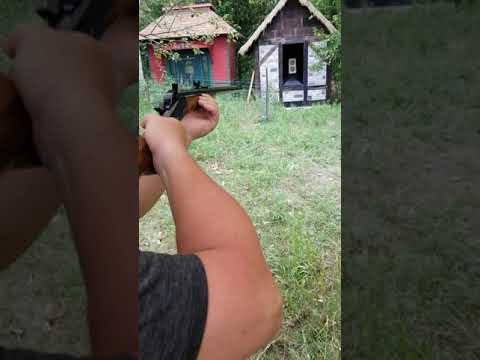 Of course, Pedersoli is well-known for the quality of their reproductions, and this is no exception. The entire mechanism of the breechblock was tightly fitted and solid, operating smoothly. Likewise the trigger was smooth and comfortable. As with the Remington above, the gun had enough mass to tame recoil from the .45-70 gov loads we were shooting, and it was easy to be accurate with it even on first try.

This is the so-called “High Wall” version, designed to handle high power loads, such as the .45-70 gov cartridge. This reproduction is by Browning, and this particular gun had been custom etched (with inlay) with a “Right to Keep and Bear Arms” design:

The review of this gun linked above is picky about a number of things which didn’t bother me. I’m not sure whether that is due to our having a slightly different model, or what. I thought that the fit & finish were fine, and the gun operated flawlessly as far as I could tell. I didn’t note any excessive recoil at the time of shooting, though I’m not particularly recoil-shy, so I was surprised to see that in the review. Perhaps if we had tried some more powerful loads?

Anyway, I thought it was a treat to shoot this gun. Here’s one of the other BBTI guys shooting it:

All in all, I thought all four of these reproduction rifles were quite enjoyable to try, and I think that any of them would make a fine addition to your safe, if you’re into rifles. While none of them are original guns from the period, they all offer insight into the technology of that time.