The Wartrace Regulators hosted the 2017 Tennessee State Championship – The Regulators Reckoning at their range outside Wartrace, Tennessee October 12th - 14th. We had 210 Shooters sign up from 17 states. And the weather could not have been more accommodating. 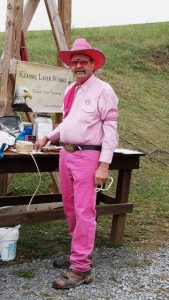 I see by your outfit that you are a cowboy......Randy St. Eagle, aka "The Pink Cowboy" showing his support for the cancer research fund.

Thursday was a day for looking over the various match stages, meeting folks and friends and partaking in the various side matches. This was also the day shooters were encouraged to show their colors in support of cancer research by wearing pink. Of course, none could even come close to out-pinking Randy St. Eagle, who has for a long time strongly supported this endeavor.

Friday started the serious event of the State Match, with a welcome by Chapter President Whiskey Hayes and a safety meeting conducted by Papa Dave, followed by a prayer, the pledge of allegiance and a hearty Yee-Haw before the ten posses headed to their shooting stages. This year’s stages included the Depot, Death Valley, the Trestle, the Livery, the KO Corral, the Jail, Jersey Lilly’s, Wells Fargo, Grafton’s and the Gallows.

Friday night a true south of the border meal was served by Rollin’ Chopstix, followed by awards being presented for the events held Thursday. Closing out Friday’s activities a drawing was held for assorted fine beverages compliments of the Jack Daniels Distillery. 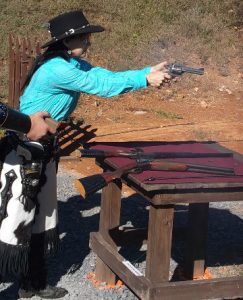 Saturday dawned with the ten posses resuming shooting their remaining five stages for the State Match. It was another fine day with more serious and truly fine shooting. The shooting started to wind down around 2 o’clock with shooters heading out to prepare for the awards banquet being held that evening at the Bell Buckle Café Banquet Hall in Bell Buckle, Tennessee.

Whiskey Hayes hosted the banquet and awards ceremony, and following an excellent meal, was the moment everyone was looking forward to – the presentation of this year’s winners. Kicking things off was the induction of Shamrock Sadie as a Jedi Gunfighter. Randy St. Eagle was proud to announce that well over $5,000 was raised for cancer research this year!

This years Puppy Posse had five members – Nicki - alias Black Diamond Nicki, Brandy, Sam, Allie and Casey.  All were exceptionally well-behaved and obeyed all the rules of the range. 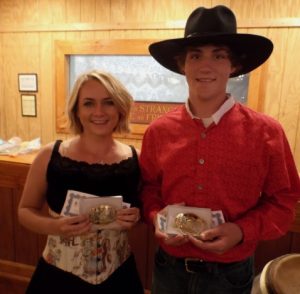